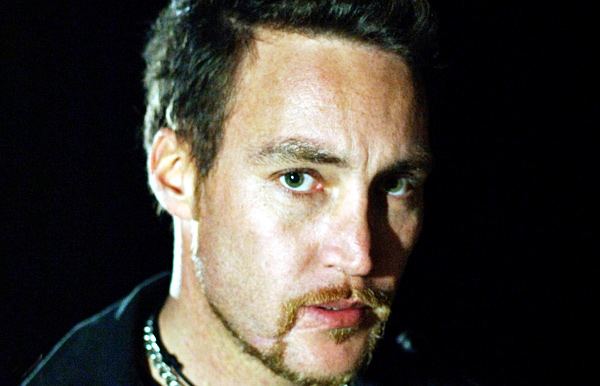 Johnny first appeared in a car at Summer Bay High to warn brother Rocco that he had made a commitment to the gang and therefore couldn’t back out. He immediately clashed with Brad Armstrong who ordered him off school premises but not before Johnny threatened to teach Brad a thing or two. Ordering his brother to move drugs for him and planting them on him he then headed to the Diner with his gang and caused chaos, stealing a tip from one of the tables before finally giving it up to a furious Irene.

Receiving the drug money from his brother and the suggestion that Brad was interfering, Johnny headed straight to Summer Bay High to threaten Brad and then later threatened Rocco that death was the only escape from the gang. Later he trashed Brad’s flat and made Rocco give him an alibi before outlining his plan to rob the Caravan Park House. Rocco talked him out of it suggesting Amanda’s place as an alternative so the gang robbed the mansion with Amanda and Peter inside. After the robbery Johnny suggested they lie low for a while and told Rocco to integrate himself at the Caravan Park House but after a warning from Brad, Sally refused his request to move in so Johnny took action. Leaving Rocco severely beaten, Brad found him and convinced that Rocco genuinely wanted out, Sally agreed to let him stay.

Johnny forced Rocco to steal a necklace from Sally and continued to clash with Brad, finally forcing him off the road in a four wheel drive but with no evidence, Johnny got away with it again. He continued to torment Brad, showing up at the school, suggesting he was about to attack Sally and then leaving messages about Emily on the blackboards of the school until Brad eventually snapped and attacked Johnny. He then set Brad up by paying a pupil to claim that Brad sold him drugs at the same time as forcing Rocco to transfer money from the Caravan Park Bank Account to Johnny.

Johnny began to lay down plans to rob the Credit Union whilst at the same time continuing to torment Brad who spotted the Ute that forced him off the road and on following it, overheard Johnny’s plans for a robbery. He informed the Police but Johnny beat him to it, removing the Ute. He was clearly apprehensive when the police searched his house and relieved when they find nothing, thanks to Rocco revealing he took the plans before the police could see them.

Still determined that the Police missed something, Brad sneaked back into Johnny’s house and found a bag of jewellery stolen from Amanda’s house and covered in Johnny’s fingerprints but somehow, the jewellery mysteriously disappeared in transit.

Overhearing Rocco betray him to the police Johnny changed the plans but was busted by a suspicious Sally who found the real plans and shopped him to the police, leaving Johnny to be arrested. Furious with his brother’s betrayal Johnny insisted that Rocco either kill Sally or dies himself. Before Rocco could do it though, Sally remembered and Rocco ran to Johnny for help. Johnny sent Rocco to a safehouse and later sent Ric to the same location. On arriving there Ric found Rocco badly beaten and concluded that Johnny was responsible but Johnny had cleverly set Ric up and when Rocco later died Ric found himself on a murder charge.

Giving evidence at Ric’s trial Johnny ensured that Ric was sent down and then instigated a transfer to the same prison as Ric, bullying him and paying off prison guards to help him until an elaborate plan by Lucas, Matilda and Ric saw Johnny revealed as the real person behind Rocco’s murder and Ric was released from Prison, leaving Johnny to serve sentence for the murder of his own brother.

Months later, Sally got a phone call from Jack in the middle of the night. He told her that Johnny escaped from the prison and that he could be on his way back to the bay. The residents went in to panic-mode, but the police weren’t even sure on his whereabouts. Johnny had stolen a car and made his way back to Summer Bay. He started to hide around in the Caravan Park. While Colleen was drunk and wandering through the bushes, Jack held her at gunpoint thinking it was Johnny. One evening, Miles and Roman stayed over in Sally’s house to protect her. While Roman was sitting outside Sal’s room, Miles was asleep on the couch downstairs. Miles was woken up by the howling Colleen and ran over to the door. Roman was running down the stairs telling Miles not to open it, but it was too late. By the time Roman was in the room, Johnny was there with Colleen as his hostage.

Despite sally’s attempts to talk him down, Johnny was resolute in his efforts to get at Sally and when miles made a wrong move, Johnny took the chance to throw Colleen in his direction and stab Sally. As Roman and Miles went to Sally’s aid Johnny took the opportunity to flee. He was almost stopped by Jack Holden on his rounds of the area but Roman diverted his attention to Sally’s plight and Johnny was able to escape.

The Police tracked him through the bush and Jack managed to injure him with a shot. Wounded and with the police on his tail, Johnny made a phone call to insist somebody came to help him. The person he called turned out to be Jack’s wife Sam who hid him out in the annexe at Tony’s house. Little by little it was revealed that Johnny was blackmailing Sam and soon hiding him out was not enough, he insisted Sam help him get to Sally. When he found out Sam had lied about her being in the hospital he reacted angrily and violently assaulted Sam, the extent of which, was left to our imagination.

He overheard a conversation which revealed that Ric was staying in the Holden house so he took his chance while Ric was in the shower to tie up Matilda and use her as a hostage. Jazz arrived home while he was waiting and not realising who he was, introduced herself to him. He knocked her out and tied her up too. When Ric emerged from the shower it was to find Johnny Cooper in his front room armed with a knife.

They fought but just when it seemed that Ric would be beaten, Sam, who had been hiding out in the annexe, entered the room and hit Johnny over the head with a cricket bat. He was rushed to hospital and given a slim chance of survival but he managed to come round and whisper the words ‘under the bed’. Before he could explain what he meant, he arrested again. After Jack told her what Johnny had said, Sam administered an overdose, causing Johnny to have a major heart attack and die.