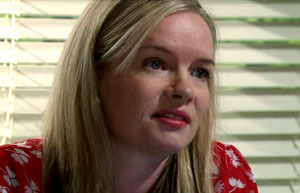 She was also the Doctor Aden went to when he was worried that he had contracted HIV from Cassie’s blood during their car accident. On this occasion Doctor Clayer had good news but was shocked when on telling Aden he was HIV negative, he burst into tears. fer some persuading he admitted that his grandfather had done things to him but when she tried to refer him to a therapist he became angry. He insisted he wasn’t some ‘weakling sicko’ who needed help and threatened to sue her if she told anyone his business, before storming out.