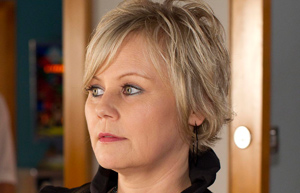 Jill was first seen when she turned up at Noah’s and asked Alf about local hotels. She then shared a drink with John and it wasn’t until she turned up at the caravan park that she was revealed to be Romeo’s mother. Romeo was less than happy to see her, since she had been returning his letters unopened and had been in town for days before seeing him. Jill responded by going back to Noah’s and getting drunk. Alf and Marilyn took her back to the house where she passed out on the sofa and Romeo spent the night looking after her.

The next morning, Jill told Romeo that she had received a payout from her husband’s death and was rich. Romeo was disgusted: Jill had killed her husband when he was beating Romeo but Mink had taken the blame and Jill had done nothing to help either of them. Jill gave him a cheque for $50,000, saying she would do the same for Mink, but he ripped it up and gave it back to her.

Jill continued to make a play for John, despite him telling her he was with Gina. Gina began to get upset that Jill was always with John when she saw him, despite John trying to convince her it was innocent, and it wasn’t helped when Jill kissed him in Noah’s just as Gina walked in. Unable to connect with Romeo, Jill started drinking heavily, eventually turning up at school drunk. Miles and Romeo took her home where Romeo told her he wanted her out of her life but when John told him he’d watched his father drink himself to death, Romeo told Jill to stay and sober up.

When Jill ran into John at the gym, she went for a drink with him, ignoring Miles’ attempts to get her to go home to Romeo. She went back to John’s place where they shared a dance and a kiss but were interrupted when Gina turned up. John got Jill to hide in the next room while Gina was around, where she started drinking from a hip flask. When John went to check on her, he found her passed out drunk. He took her for breakfast at the Diner the next morning, where Romeo saw her and realised she was hungover.

Irene ambushed Jill at the house and gave her a lecture about being a pathetic drunk. Jill accused Romeo of putting her up to it and complained to Miles that she was being victimised. John told her he couldn’t spend time with her until he knew what was happening with Gina. Jill went back to Irene and told her she wanted to change but didn’t think she was strong enough. She apologised to Romeo and tried to build bridges.

Miles arranged for her to move into the house and offered her a welcome dinner, while Marilyn offered to help her detox. Irene gave her a card from an AA group which she didn’t seem comfortable with but Romeo saw her with it and was pleased. She ran into John at the gym while considering signing up for a Pilates class and joined him for a juice but they were interrupted by Romeo, who was annoyed Jill hadn’t turned up for the dinner and accused John of getting her drunk. Jill convinced him she hadn’t touched alcohol and got him to apologise to John and invite him to the dinner. However, Miles had invited Tony and Rachel and when Tony saw John with Jill, he accused him of cheating on Gina and the pair got into a fight. Jill took John home where they slept together.

When she ran into Gina at the gym the next day, Jill attempted to cover for John but he spoiled the effect by coming in and returning the watch Jill had left at his. Gina told Jill she wouldn’t come between her and John but wouldn’t turn him away. Romeo was worried, feeling Jill wasn’t in the right place to be in a relationship. Jill bought some sexy underwear for a date with John and they spent the night together again but afterwards he admitted he was still in love with Gina and felt they should stop, although he confirmed he cared for her as a friend.

Jill remained optimistic and stayed sober. She was pleased when Romeo wanted to spend time with her on the beach, only to find he’d been keeping her out of the way so Gina could get back with John. She told John about the collusion but he still chose Gina. Jill was furious with Romeo, downing a glass of wine and telling him she was leaving. Marilyn convinced her to stay and she spent another night passed out on the sofa. Irene warned her she could lose her children and Jill considered going to AA, with Romeo offering to go with her. However, the next day Romeo got up to find Jill had left during the night, leaving him a note. When Mink returned to town the following year, she noted that she’d run into Jill who was now penniless again.