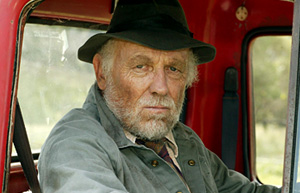 Bruce was first seen aiming a shot gun at Martha and Jack whist they were on a picnic. What they didn’t know was one that Bruce was the owner of the land they were ‘trespassing’ on and two, that they should probably get out of there as soon as possible! Bruce fired the gun into the air and afterwards speedily drove off.

When Annie, Bruce’s granddaughter went to hospital, Sally asked what sort of education she received. Bruce said that she was home taught, studied the bible and worked hard on the farm. Sally started to get concerned that perhaps Annie wasn’t getting an education at all.

In Annie and Geoff’s parent’s wills, there was information on what should be done in regards to their schooling. Money had been set aside for them so there wasn’t much keeping Bruce from sending them to school.

Geoff was a very keen rugby player so when he joined the team and started training, Bruce wasn’t too pleased. As a very religious man, Bruce was keen to make sure Geoff was respectful and did his chores on the farm. But in his eyes since he had started playing rugby and going to school, his duties on the farm weren’t being taken care of properly.

Bruce was very protective of his grandchildren especially Annie. When her and Lucas became friends, Bruce wasn’t at all happy. When Annie was tired after working on an assignment she fell asleep on Lucas’ bed. After raging through the Hunter house to find out where his granddaughter was, Bruce made a threat against Lucas and said that he would come after him with a shotgun if he didn’t stay away from Annie!

Things with Geoff often resulted in Bruce and Tony having a few words over his future in the rugby team. When Tony found out that Geoff was ploughing fields in the middle of the night, he was horrified. He made sure that Bruce knew what he thought of his behaviour towards his grandson, before assuring Geoff that he would coach him and make sure that he continued to play in the team.

As if things weren’t crazy enough at the Campbell’s farm, Bruce locked Annie in her room after finding a magazine in her bag, which he didn’t want her reading!

Bruce was also questioned over the attack on Tony, but had an alibi and was cleared as a suspect.

Bruce continued to work away on the farm, and unbeknownst to Annie and Geoff, was also dealing with heart problems.

Geoff took matters into his own hands and poisoned some of the sheep on the farm. Bruce was appauled when he found out…and that was even before he knew Geoff was responsible. Fearing that it might happen again, Bruce stayed up late at night and watched the farm to see if anyone was hiding around there. He saw someone running and was quick to fire his shotgun at them. He was ashamed when he saw that Geoff was the one he had shot. He knew he was responsible, having seen the box of rabbit poison which was next to him. Bruce kicked Geoff out of the Campbell’s farm, causing massive tension between them.

With Geoff having found a home at Tony’s, it was up to Annie to convince Bruce to sell the farm and stop working. But she didn’t succeed. Bruce was determined to keep working on the farm and he wouldn’t let anyone, not even his own grandchildren, tell him he shouldn’t.

Bruce’s heart soon made that decision though, when he started to have a ”dizzy spell” as he put it. Sally found Bruce collapsed at the Campbell farm and he was soon in hospital having just suffered from a heart attack. Bruce still didn’t want Annie and Geoff to know about his severe heart problems though, and asked Rachel Armstong not to tell them of his condition.

He returned to the farm but yet another drama ensued, when he held a gun pointed straight at Annie and Lucas. They were locked in her bedroom and when Geoff found out, he went into the Campbell farm house to rescue them. After a showdowm which involved Geoff pointing a rifle at Bruce, Annie and Geoff were finally free from the farm. With the kids gone from the farm, Bruce then realised what all his actions had led to and broke down in tears.

With Annie and Geoff staying at different places, Bruce was having to do more work on the farm. His heart condition wasn’t improving and when Annie found out that he had been admitted to hospital since her and Geoff had left, she wanted to see him even more than she did before. Geoff was against the idea and so was Bruce, saying that he didn’t need them as he had hired someone else to look after the farm. That ‘someone’ was Michael A.K.A Jonah. Annie and Geoff didn’t have a clue about who Michael was and were shocked, when they found out about his actions when he was ‘Jonah’. After trying to prove that he was a changed man, Annie and Geoff were happy enough to have him stay on at the farm and continue working there.

The first signs of a turnaround in Bruce’s attitude, came when Martha and Michael were trapped in the mineshaft. Bruce seemed proud of Geoff’s efforts to go in and help the other rescuers.

Annie was starting to feel homesick again and wanted to return to the farm. Bruce was starting to return to his old ways though and said that he didn’t want her or Geoff living under his roof. Annie didn’t take his decision well and was taken to hospital after spending a cold night out on the farm. Bruce insisted that he had work to do at the farm and so left the hospital not long afterwards. Back at the farm, Bruce told Michael that he knew he didn’t have long left. Bruce returned to the hospital to see Annie which helped lift her spirits. He slowly came around to the idea of having both Annie and Geoff back at the farm again.

Geoff’s rugby was really starting to take off and he wanted his grandad’s support at one of the important matches. Bruce could really see that rugby made Geoff happy and showed up just when Geoff needed him the most. After the match, Bruce congratulated Geoff on playing so well and encouraged him to continue doing it, if it’s what he wanted to do.

Back at the farm the same afternoon, Annie, Geoff, Martha, Lucas and Michael were all helping out with various jobs. After a smile from his grandson, Bruce collapsed on the farm and died. Shortly after his death, Michael told Annie and Geoff that Bruce had made him Annie’s legal guardian and guardian of the farm.

His funeral was held a few days later, where Geoff commented that not only was Bruce his and Annie’s pop, he was also their mum and their dad.