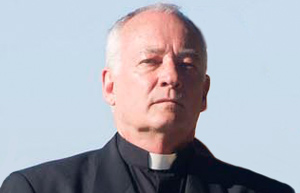 When Melody was struggling to cope following her release from the hospital, Geoff thought it would be a good idea for her to talk to Father Bryan from the church. However, when they told Christine she was less than impressed but Melody insisted she need to talk to him.

When Father Bryan arrived at the house he was keen to start talking to Melody but Christine swiftly ushered him away for a word in private. In the kitchen Father Bryan was clearly upset at something Christine had talked about (We later found out that she had suggested an exorcism). Father Bryan said it was misguided and extreme and he refused to play any part in it. Christine suggested he should talk to Melody another time and he left saying he would be back tomorrow.