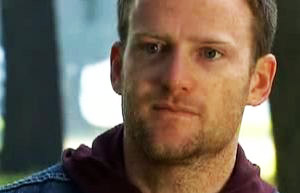 Rusty Bolten wasn’t in town for a social visit. He was trying to track down Sam Tolhurst. First appearing in the Surf Club, Rusty asked Colleen if she knew anyone by the name of Kylie Deeks. He also showed her a photo of her and although Colleen thought there was a similarity between her and Sam, she said she didn’t know who she was and walked off. On the night of the hospital ball, Rusty managed to find Sam’s address on the staff computer. He then went around to the Hunter house where she was living at the time. Kit was there and told him that she would be at the Surf Club attending the hospital ball. He waited outside the Surf Club until he saw her. When he did, he phoned someone to let them know that he had finally phone ‘Kylie Deeks’.

Rusty found Sam whilst she was on a picnic. He confronted her, befores she gave chase and ran off into the bush. She managed to get away from him from a while but he eventually caught up with her. Sam told Rusty that he could have whatever he wanted, she just wanted to go. A few moments later, Jack and the police turned up. Sam was relieved when her ordeal was over and watched as one of her ex husband’s henchmen was driven away by the police.