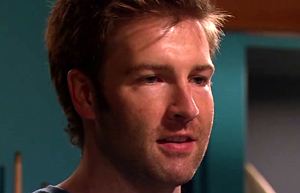 Russal was a drug dealer that Belle had dealings with after becoming addicted to prescription medication. Unable to pay him what he asked, Belle gave him a necklace that Aden had given her as surety. When she turned up with the money, he told her to keep it since he had already pawned the necklace. A short time later, after Belle had gone through withdrawals, Russal turned up at the Diner to offer her goods but she turned him away. Aden later saw Russal at the surf club and noticed Belle ringing his phone but Belle explained she was just telling him to stay away from her. Aden later caught Russal dropping off a “free sample” on Belle’s doorstep and sent him packing.

While Belle was in rehab, Aden saw Charlie questioning Russal and letting him go because of a lack of evidence. Aden later saw Russal doing a deal outside the surf club and, unaware Alf had already called the police, attacked him. When Charlie arrived, Russal managed to run off. Charlie later told Aden that they’d caught Russal with drugs on him and he was going to jail.