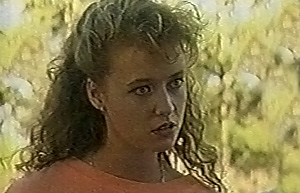 Vicki was a schoolgirl who was primarily used to torment the main characters. She first hassled Carly about repeating year twelve and accused her of being a drug addict after Celia mistakenly spread roumers about her having to go cold turkey. She gave Carly more grief when her relationship with Andrew was revealed.

The next person Vicki abused was Viv Newton who she bullied for being Fisher’s pet. Steven and Dodge tried to get revenge on her by filling her locker with a garbage bag full of coloured water but the trick backfired when the awter landed on Fisher. Viv owned up but Vicki overheard Fisher letting her off with it and warned her that she was going to pay because Viv’s prank ruined her autographed photo of INXS. She continued tormenting Viv and was furoious when she realised that Viv was planning to go to the school dance with her crush Matt. Vicki warned Viv that if she wanted friends she’d stay away from Matt.

She teased Carly over her job at The Diner and her past as an alcoholic and Carly decided to get revenge. After Vicki asked Matt to the dance Carly set her up so that her date at th dance turned out to be Martin rather than Matt, who attended as Viv’s partner.

She tried to split Steven and Viv up by sending him a letter from Viv breaking up with him and sending her a letter from Steven telling her that he was seeing a new girl called Sarah. She developed a crush on Grant Mitchell and continuously pestered him for extra tutoring. Grant confided in Carly that he was worried one of his students had a crush on him and Emma overheard the information and used it to taunt Vicki. Furious Vicki plotted her revenge on Grant and went round to his caravan. She later rushed into the Fletcher house sobbing and saying that after she asked him for tutoring, Grant tried to touch her.

At school Fisher tried to get the truth out of Vicki but she insisted he was guilty. When Emma threatened her she reported her and when confronted by Emma and Viv the next day, she threatened to strangle her. Emma dropped a milkshake on Vicki’s head and later gave her windsurfing lessons and refused to let her back on the board until she admitted the truth. Vicki was caught by a current and dragged under the water. Grant came to her rescue but Vicki warned him that he’d be in trouble when the cops hear about him touching her, despite Emma pointing out that he had just saved her life.

The next day at school the whole class refused to talk to her and she wasn’t picked for a team during PE. She ran away and was kicked out of the general Store by Alf and was found crying by Fisher who got her to admit what had happened. In Grant’s caravan she admitted that she had made up the allegation as revenge for Grant talking about her but Grant insisted he never mentioned her name. Grant was allowed back to work and asked Fisher to go easy on Vicki, saying he felt sorry for her. Fisher later wanred Emma and Viv that the harrassment of Vicki had to stop.

When we next saw Vicki some 50 episodes later it was clear that she still hadn’t forgiven Emma for the Grant affair. Vicki challenged Emma to $50 bet over the outcome of their exams and went out of her way to make Emma seem thick. Emma set Vicki up, causing a bucket of water to pour on her head and Vicki plotted her revenge by picking a fight with Emma which was seen by Fisher. He warned them that if there was more fighting they’d be expelled so Vicki used her cousin to call Fisher out of the office as a diversion while she stole an exam paper. When Fisher realised the paper was missing he ordered a locker search and the paper was found in Emma’s locker leaving Fisher to expel Emma.

Vicki continued to torment Emma, setting her up so that Fisher saw Emma attacking her. Emma retaliated by pouring salt all over Vicki so Vicki decided to get revenge by stealing Emma’s boyfriend Paul off her. She chatted him up, offered him piano lessons and took him to the movies, causing him to stand Emma up but she didn’t realise that Paul was only going out with her to prove that Emma was innocent. Vicki snuck into school at night and spraypainted graffitti about Pippa and Fisher all over the lockers and planted the spray can in Emma’s lockers.She later picked a fight with Emma in The Diner so that Pippa overheard that it was Emma who had sprayed the graffitti. Vicki bullied Marilyn and was pulled up by Fisher who began t suspect that she might have been behind the exam paper theft.

Vicki admitted to Paul about how she set Emma up and Paul used her address book to track down the cousin who created the diversion for her. Her cousin Anna went with them to Fisher and admitted the truth. Fisher questioned Vicki who continued to deny it but the threat of the police getting involved led to her confessing. Vicki was expelled from school and not seen again.