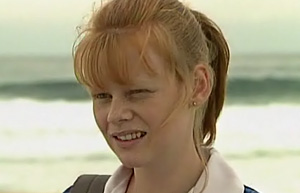 Sandra was in Steven’s class at school and dropped her books in an attempt to get him to notice her. Steven was initially uninterested but when they began talking about the science project and how it got her away from her violent father, he began to warm to her. When her father lost his job he became increasingly violent and hit her on many occasions. She confided in Steven who told Tom and in Ailsa but both said there was little they could do without proof.

Her father beat her again after being accused of poisoning Nico’s cow and Sandra confided in Steven who admitted he liked her and the two almost shared a kiss but were interrupted by the bell. Steven invited her to his birthday party and she made up an excuse to go but when she returned home she found a note saying her mother was in hospital and confided in Ailsa that her Dad must have bashed her mother for giving her an alibi. Ailsa told Sam that Sandra was studying at hers to stop him hitting her.

Sandra asked Steven to cheat for her in a test because she was scared her father would beat her if she failed it and she was angry with him when he refused. When her father cancelled an eagerly awaited holiday because he didn’t do well in her history test, Sandra tried to convince her mother to leave. Sandra got mad at her father and stromed out. She talked to Ailsa who told her again that they couldn’t do anything without proof. Sandra headed back home and deliberately got beaten up but her father knocked her unconscious. When Alf and Ailsa arrived he said she had fallen off a chair.

In hospital she refused to let her father in and was told by the police that they could arrest him if her mother testified too but Kerry refused. Steven cheered her up by bringing her a Walkman in hospital and they shared a kiss. She was tricked into leaving hospital by her mother who told her they were going to run away but on arriving home she was promptly locked in her room and a note delivered to Steven saying she had moved away. Kerry helped Sandra escape though and she ran to Ailsa who sent Bob Barnett to Sandra’s house. After an hour of hearing nothing Sandra took off towards home and arrived in time to see her father armed with Barnett’s gun and holding Kerry, Barnett, Steven and Tom hostage. She told her father how much she hated him, riling him and a shot was fired.

Kerry turned out to be the victim of the gunshot and Sandra attended her funeral three days later. She asked Ailsa and Tom and Pippa to foster her and they both refused but a foster family was found for her in the city and after a last date with Steven she departed the bay.

In 2000 when Steven returned to the Bay, he mentioned how whilst he was at University, he had searched for Sandra, but had been unable to find her. Pippa had heard that Sandra had changed her name to prevent her father from finding her when he was released from prison.