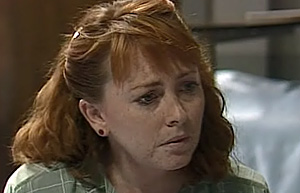 Appeared on a number of occasions being beaten by her violent husband Sam. She got on well with her daugter Sandra and after a chat with Pippa agreed to give Sandra an alibi so she could attend Steven’s birthday party. Sam realised that Kerry was lying and badly bashed her; by the time sandra returned from the party though there was a note saying that Kerry was in hospital. She recovered but the beatings didn’t stop.

When Sam cancelled the holiday Sandra lost her temper and he beat her so badly she ended up in hospital. The police told her they could press charges if Kelly agreed to testify but she was too scared. Kerry turned up at hospital to tell Sandra they were running away but it turned out to be just a trick to get her to come home. Kerry took a huge risk in breaking Sandra out of the house and received a beating for her troubles but Sandra had gone straight to the Police and Bob Barnett turned up to witness Sam beating her. In the ensuing chaos Sam managed to grab Barnett’s gun and held them both hostage.

Tom and Steven turned up looking for Sandra and then Sandra herself turned up accompanied by Ailsa and told her father how much she hated him. Riled, Sam fired a shot. Kerry was revealed to have been the victim and her funeral was held three days later.