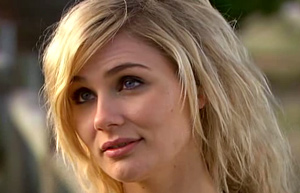 Nina arrives on a stretch of road leading to Summer Bay as a passenger on Liam’s motorbike. They kiss before heading to the Pier Diner where Nina and Liam arrive to see a surprised Bianca and Vittorio who are having lunch. Liam whose arm is draped over Nina’s shoulder mentions to Nina that Bianca works at the High School before Liam introduces himself to Vittorio. Vittorio mentions that he is Bianca’s fiancé and both Liam and Nina congratulate him. Liam then introduces his girlfriend Nina to Bianca and Vittorio before giving her a kiss on her head.

They are all seated at Angelo’s and Nina asks if they aren’t intruding so Vittorio exclaims that they aren’t. Vittorio asks where Nina she is from, she says that she’s originally from Port Augusta but she’s been backpacking for the last year around Australia – Cairns, Byron Bay, Broome and the usual places. She says that Summer Bay has been more of an unexpected detour. Vittorio asks Nina how she met Liam and she says that she was busking on a street corner where Liam heard her and Liam replies that she has “a voice of an angel”. Liam used to get his coffee at a café every morning and he would hear her sing so they got talking and they hit it off. Nina and Liam come back from the bar with some drinks to toast the happy couple on their impending wedding.

Nina walks along the beach with Liam hand in hand when she discusses Bianca and asks him if he still loves her. Nina comments that they aren’t married and that Liam can speak his mind. He says that he doesn’t know what he feels, he says that it won’t be a problem and he asks if Nina will leave because of the situation. Nina intends to stay but she has one condition: that if Liam realises that he loves Bianca then he needs to let Nina know. Nina and Liam end up kissing while Bianca and Vittorio stroll nearby.

Liam is waiting for Nina at the Pier Diner when Vittorio turns up and implies that Liam has brought Nina to the Bay to make Bianca jealous. Nina arrives and asks if Vittorio will be staying for dinner but he says that he has lost interest and leaves them alone.

Nina comes to visit Liam at the school so that she could collect keys from him as she has been locked out. They kiss in front of Bianca, with Romeo looking on at a distance, before Nina says hello but forgets Bianca’s name and then disappears.

Nina waits at the Pier Diner for Liam when Romeo appears. She gets Romeo’s attention and asks if he has seen Liam. He says that Liam might have landed himself a detention as he’s been acting out lately and Nina adds that he can be kind of a bad boy. Nina says that she likes bad boys, she asks Romeo if he’s into bad boys and he replies that he isn’t into good boys, bad boys or boys in general. Nina asks Romeo if he’s a bad boy and he say he doesn’t think so. Nina asks how old Romeo is, he replies that he’s eighteen. Liam shows up and he apologies for being late, she says that she was getting to know Romeo a bit better and then she goes to order something as she is starving. When Nina was out of hearing range Romeo mentions to Liam that he thinks that Nina was trying to hit on him. Liam says that even though he is dating Nina they aren’t serious about each and it is more of a casual relationship.

Nina and Liam have a quiet moment together when Bianca walks in. Nina talks about how it’s a nice day to collect rubbish with a bunch of school kids, which is for a good cause and that she is really looking forward to it. Liam has invited Nina and she hopes that the school didn’t mind. Bianca mentions that she has invited Vittorio.

Nina, Bianca and April collect rubbish on the side of the road while Nina talks about travelling around Australia as it is so big and that she would have to get a motor scooter to see it all. April then points out that Bianca arrived in Summer Bay on a motor scooter. Nina confesses that she stole a car from her ex-boyfriend but he made her give it back. Bianca also stole a car off an ex-boyfriend and then Nina exclaims that he probably deserved it. April realises that Nina sounds exactly like Bianca and Nina says that Bianca is a wise woman. Nina then starts talking about “Lord of the Flies” saying that it’s all about men, April exclaims that it’s all about boys and Bianca exclaims that men are just tall boys and the sooner she realises that the easier they will be to handle.

April, Nina and Bianca stand on the side of the road observing Liam and Vittorio. Nina exclaims that they must be having some sort of alpha male episode as they work so hard to pick up all the rubbish. April can’t believe that Liam can be so competitive and Nina says that once he gets into something then he can get really involved in it like his song writing. Bianca then goes off on a tangent talking about Liam before realising what she has done and walks off with April. Nina continues to observe Vittorio and Liam before she orders both men to take a break, handing Liam a bottle of water and tells Vittorio to stay put while she goes to get him some lunch. Vittorio notices that Nina is quite bossy as well as pretty. Liam says that she likes to keep him on a leash as it makes her feel good.

April and Bianca talk about Nina’s qualities – Bianca points out that she is beautiful, funny and has an excellent attitude towards men so April points out that Nina is also opinionated, feisty and a little bit full of herself so basically she is pretty much like Bianca. Bianca thinks that Liam is dating Nina as she is a substitute for her and April agrees. April says that he can’t get the real thing so Liam’s dating an imitation. Nina and Liam walk by as Bianca and April are on the beach getting ready for a swim. Nina finds it strange that Liam doesn’t want to go into the water after a hard days work. Nina quizzes Liam about him and Bianca, if they go together and says that he doesn’t and that he is with Nina. Nina reminds Liam about the talk that they had, how Liam looks at Bianca and that she feels that it is time for her to move on. Nina says that Liam is a great guy, that she doesn’t mind being with someone that isn’t serious but she didn’t like being the “other woman’. Nina says goodbye to Liam, as she wants to go alone to collect her stuff and then to leave Summer Bay. Before she goes Nina says that Bianca is a lovely girl and wishes Liam the best of luck.