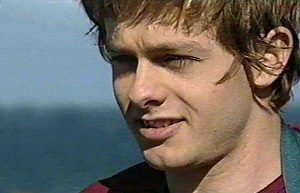 Miles, Alex’s childhood friend, came up to stay with him for a holiday just before he left for Italy as part of his Adriatic languages course at university.

Miles bumped into Brodie the next day whilst walking along the beach, but romantically he forgot to ask for her name. Later though he went to check out the caravan park where he again bumped into Brodie and arranged to have a date with her, unaware that Brodie had just recently broke up with Alex. When he told Alex it was the drop dead gorgeous from the caravan park Alex thought it was Dani. Whilst at the diner that night Vinnie tried to warn them off each other before Alex found out, but as fate would have it Alex walked in at that moment. Brodie ran out the diner.

Alex however gave Miles permission to go after Brodie and they went out to see a film later that night, sharing a kiss when they got back to the caravan park.

A few days later Miles was preparing to take Brodie out on another date, this time to go bowling. With Miles not knowing where the bowling alley was, Alex offered to take them there and brought along his new “girlfriend”, Nina. Alex spent the whole night trying to impress Brodie and after being dumped by Nina.

On another of his and Brodie’s dates, Miles told her that he was going to be leaving for Italy in a few days, he returned to the diner where Alex was. Alex started mocking him and the two had a fight and decided to spend a night in a caravan.

Just before he left Alex apologised to Miles, and after saying goodbye to Brodie he left for Italy. Over the next couple of months Brodie and Miles wrote and e-mailed each other. It was through this that Miles announced to Brodie that he was returning to Australia for the formal.

On his arrival he gave Brodie a necklace as a present. As the formal was fancy dress Brodie and Miles dressed up as Cleopatra and Marc Anthony respectively. Alex offered to drive them home and it was whilst doing this he hit a pothole and hit a tree. Alf was first to find the car and called for help. Despite Charlotte’s best efforts Miles was pronounced dead at the scene.

Miles then appeared in Brodie’s dreams telling her to let go of him and after a few weeks of mourning she finally did. Brodie had a bench erected in Miles’ memory at the headland and Alex was found not guilty at a coroner’s inquest into Miles’ death.