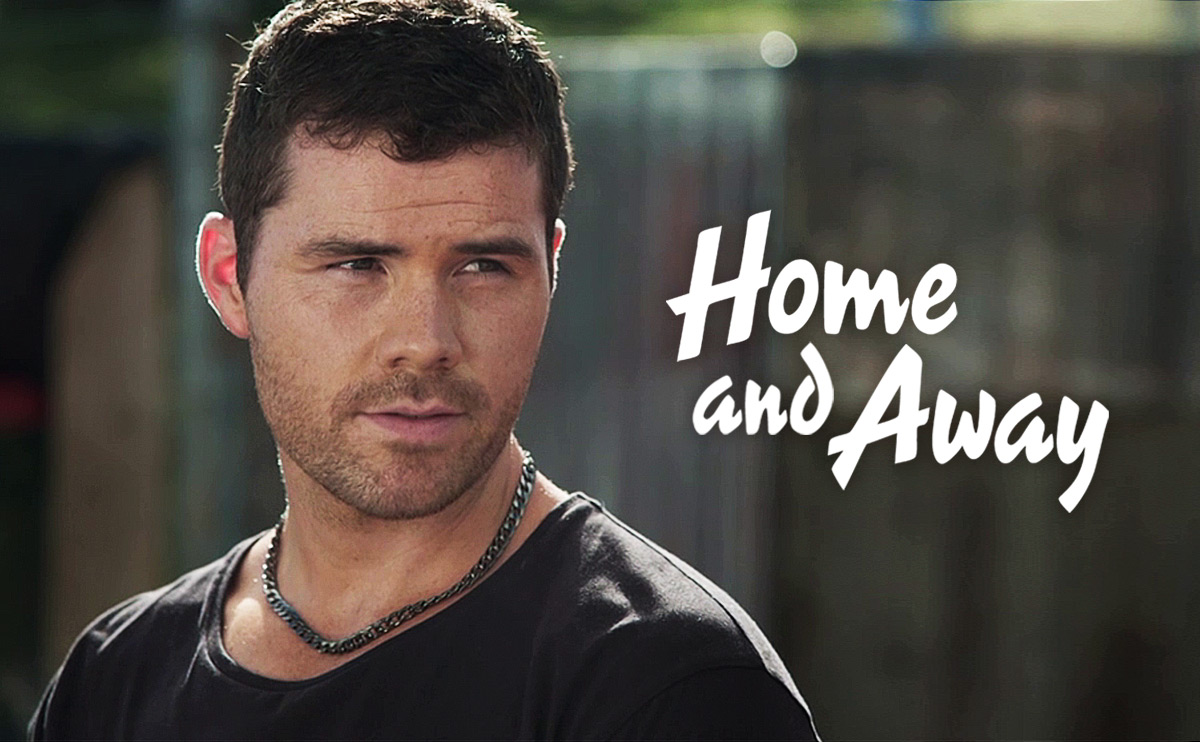 Coming up this week on Home and Away in Australia, Tane and Chloe are both in danger as Tex’s sinister connection to the Parata family is revealed.

Tex Wheeler (Lucas Linehan) has been a knight in shining armour since his arrival in Summer Bay a month ago, but so far we’ve learned very little about him. 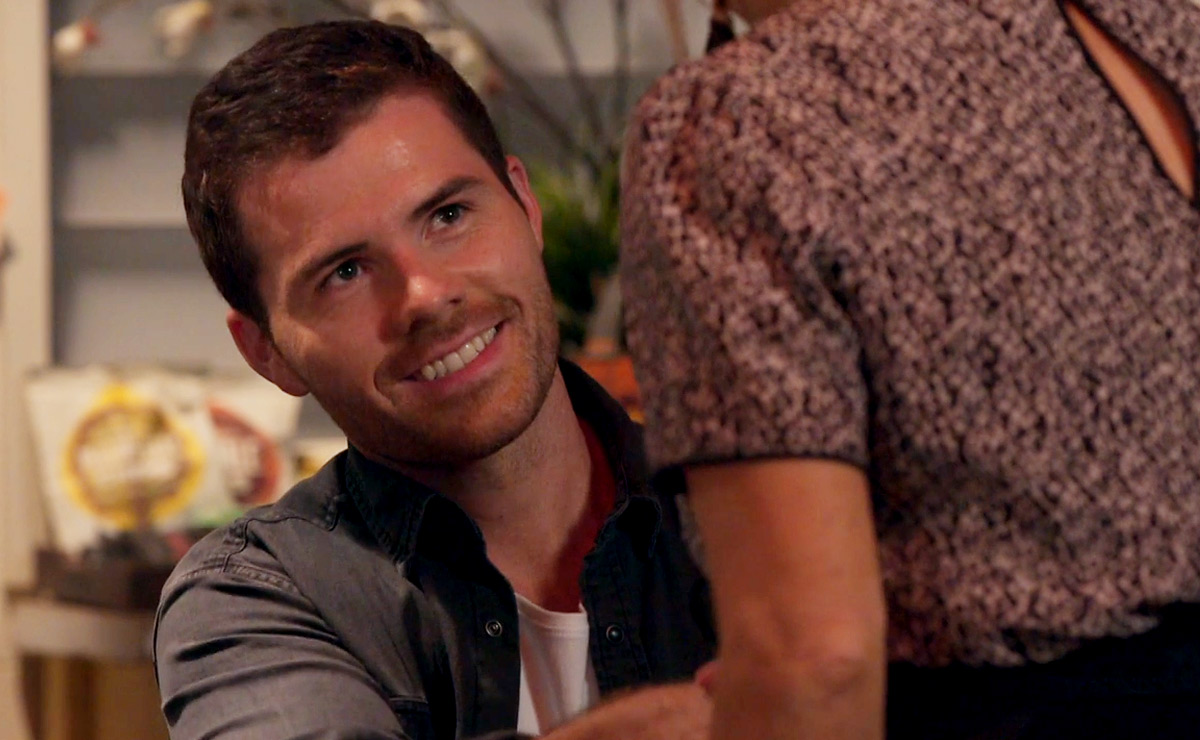 Tex answered Marilyn’s (Emily Symons) advertisement for a handyman to help out at the bait shop and caravan park, after she was left to run them as Alf (Ray Meagher) joined Roo (Georgie Parker) and Martha (Belinda Giblin) in Merimbula whilst they recovered from their recent kidney transplant.

Although Maz has sometimes had to crack her whip with Tex, as she became increasingly frustrated at his apparent lack of work ethic, she’s ultimately been impressed with his handiwork which, so far, has all been occurring off-screen. 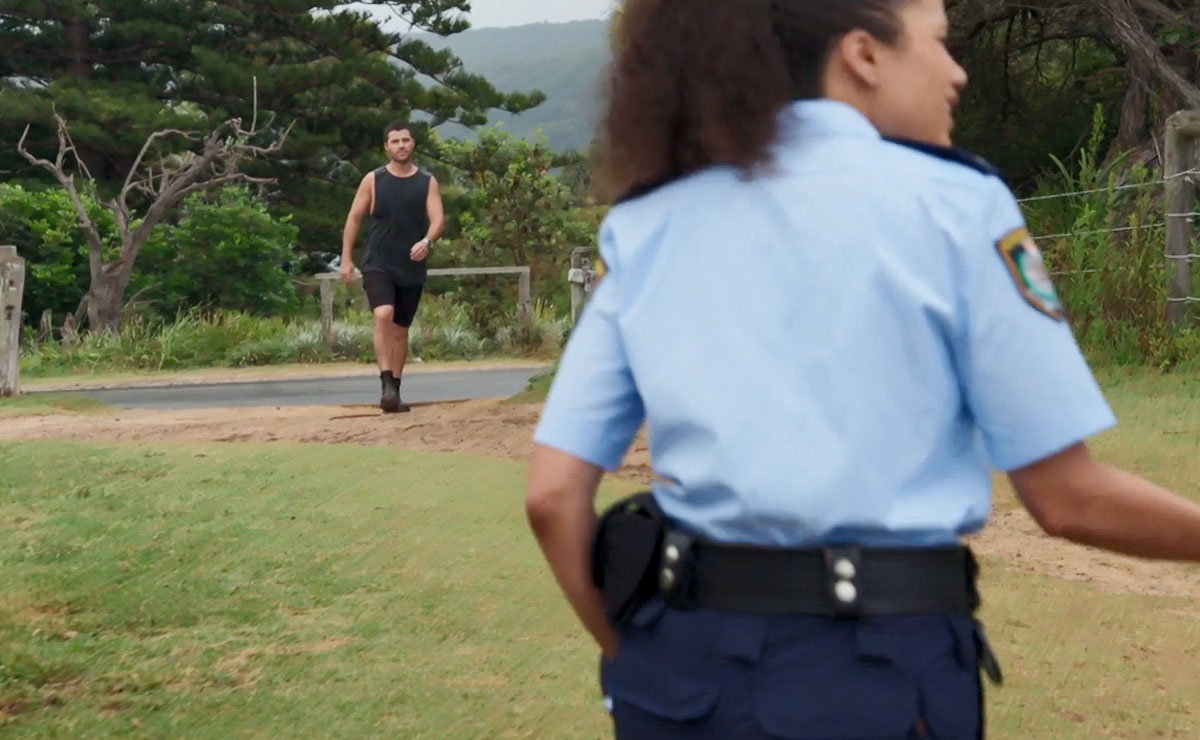 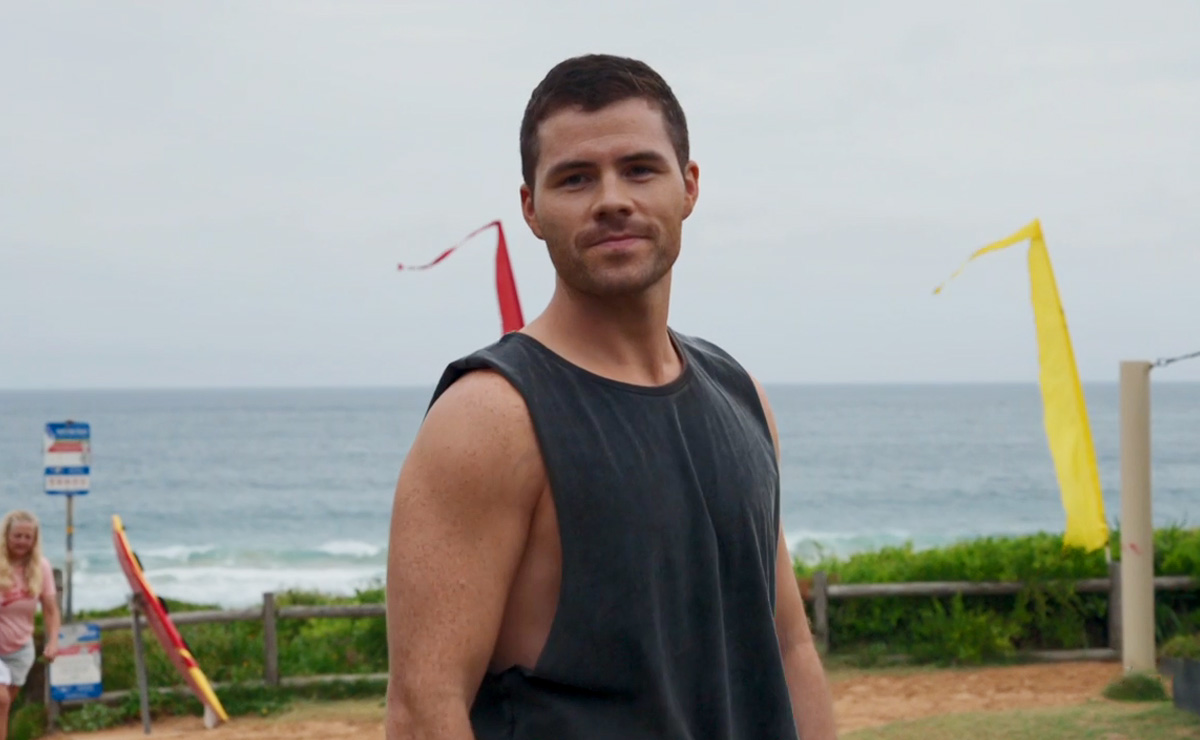 Our only real glimpse into Tex has been in his pursuit of local cop Rose Delaney (Kirsty Marillier), who he was eyeing up on first sight outside the surf club.

He later asked her for a drink, which she initially declined, but after bumping into him again she agreed to meet up that evening at Salt. 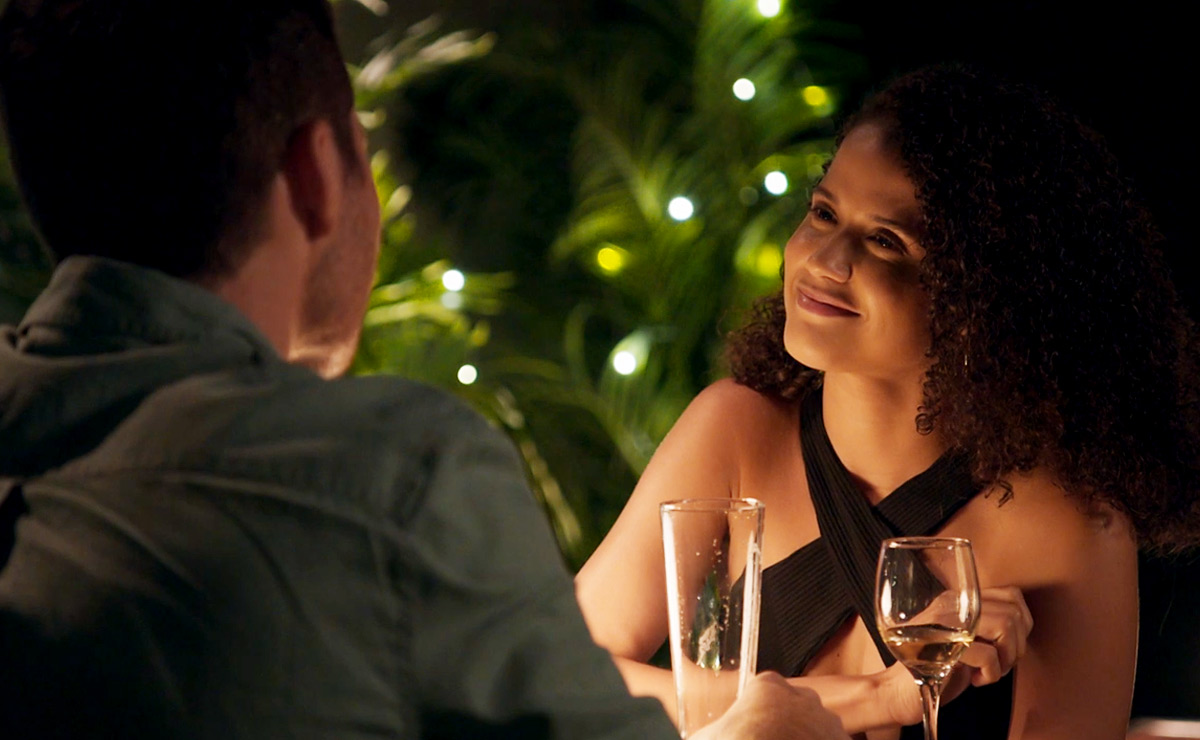 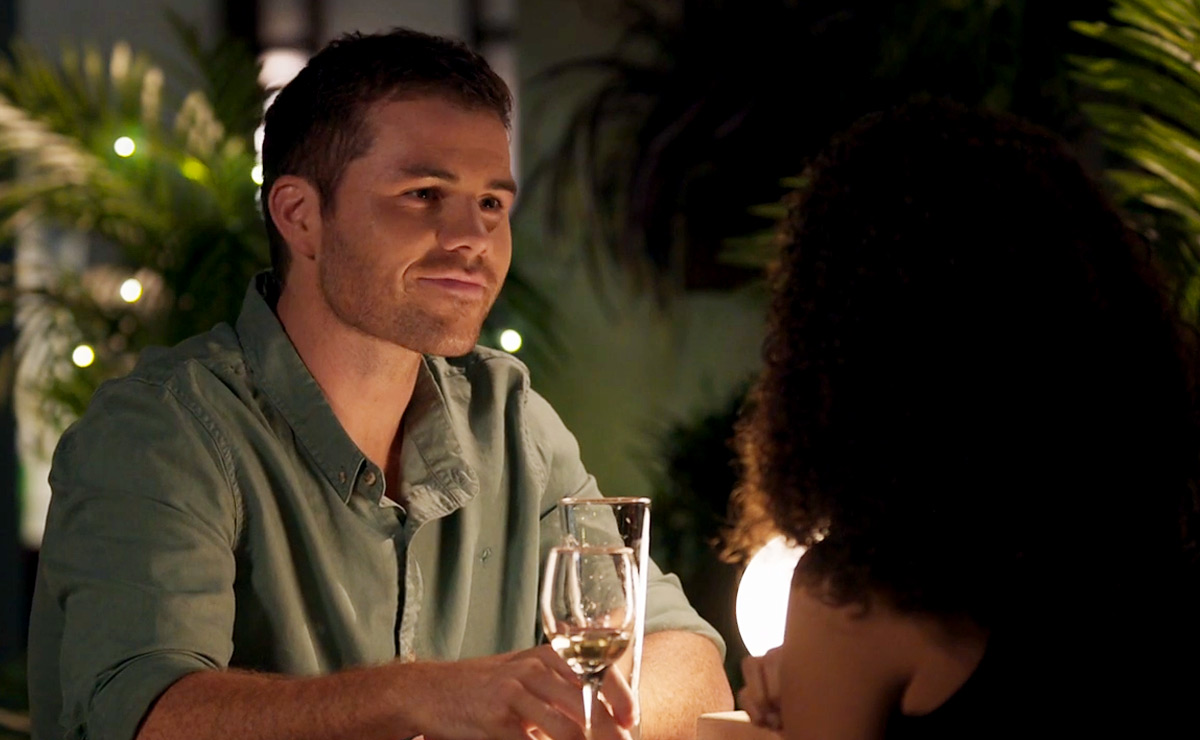 Having realised that she was in love with Cash (Nicholas Cartwright), her step-sister’s boyfriend no less, Rose had hoped that seeing Tex would help her move on, but her excessive PDA with Tex during a family lunch with Cash and Xander (Luke Van Os) didn’t help matters.

Although Tex realised that Rose was using him at the lunch, he didn’t care, and agreed to head out of town with her for a few days to clear her head. 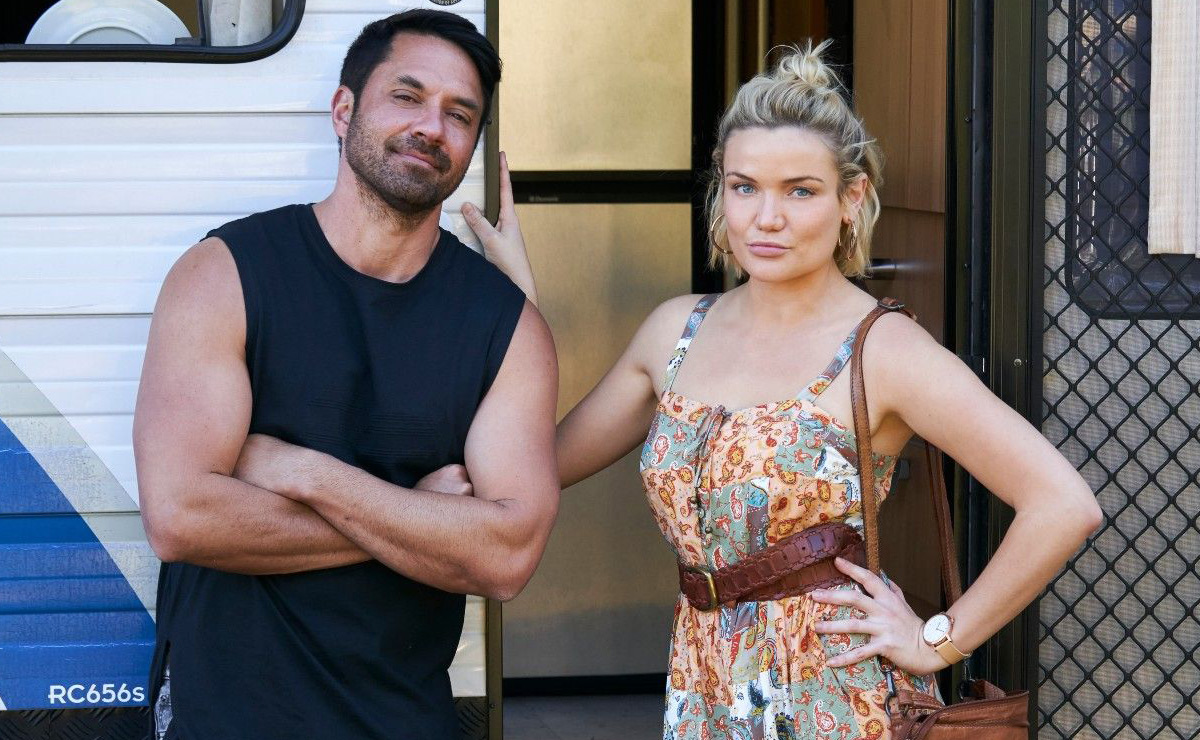 In the meantime, Tex had decided to check out the gym, and in a conversation with Tane (Ethan Browne), he learned that the gym had belonged to his late brother Ari (Rob Kipa-Williams) and his wife Mia. The conversation was interrupted however by the arrival of Tane’s girlfriend Felicity (Jacqui Purivs).

When Roo returned from Merimbula early, Marilyn found herself at a loss as to what to say to Tex—she’d promised him a month’s work.

Roo agreed to talk to him, but it seems Tex knew what was coming, and working his charm, he told Roo that this job has been good for him, helping him to get back on his feet. Roo didn’t have the heart to let Tex go as he flashed her a winning smile, and she and Marilyn got to work on creating a list of jobs for Tex to take on. 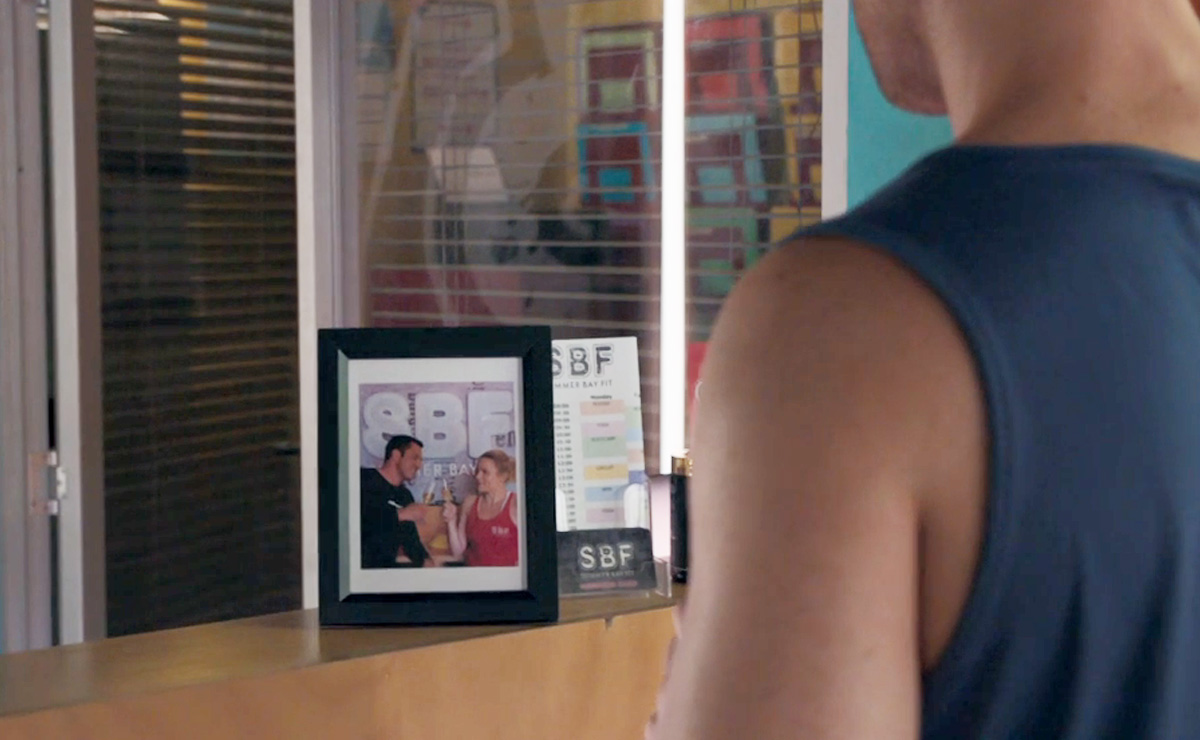 This week, it become clear that Tex has an ulterior, and potentially sinister, motive for being in Summer Bay…

Returning to the gym, Tex gains access to the office and starts going through some of the paperwork, before he eyes up the photo of Ari and Mia that Tane had previously shown him. 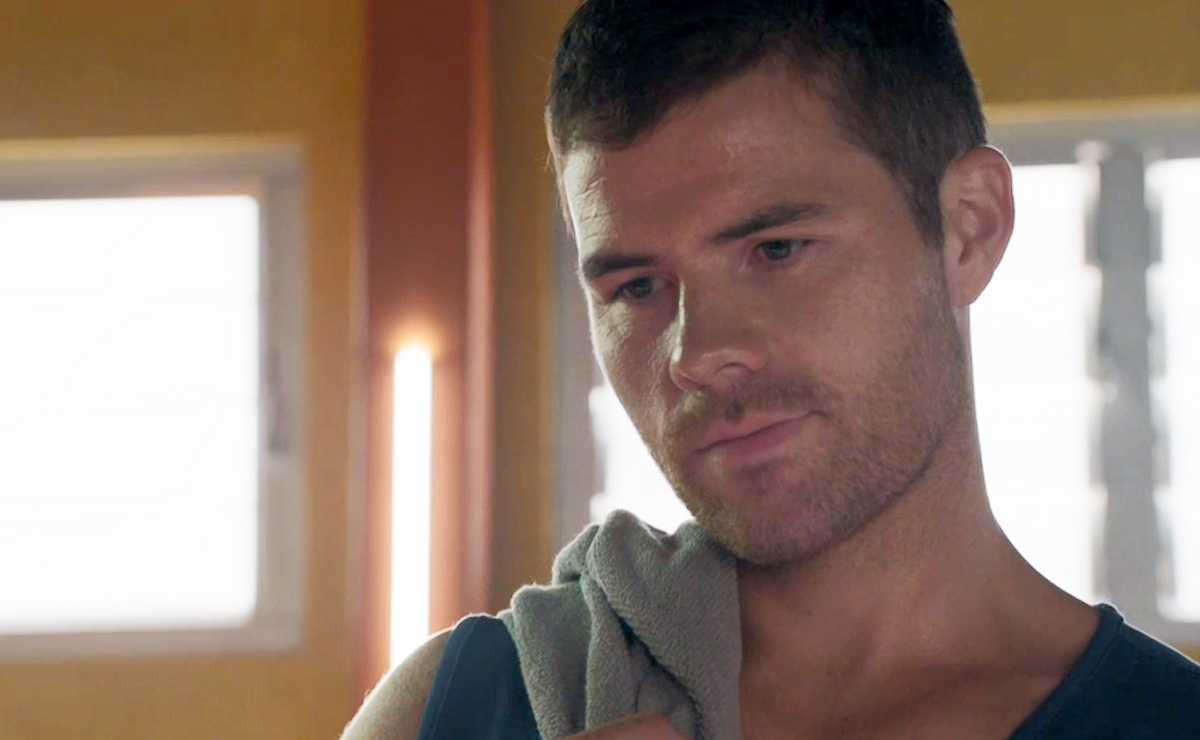 In the promo for Monday’s episode, as we hear Rose explain to a concerned Xander that Tex makes her happy, we see Tex rock up at a biker gang hangout, where he clearly seems at home. 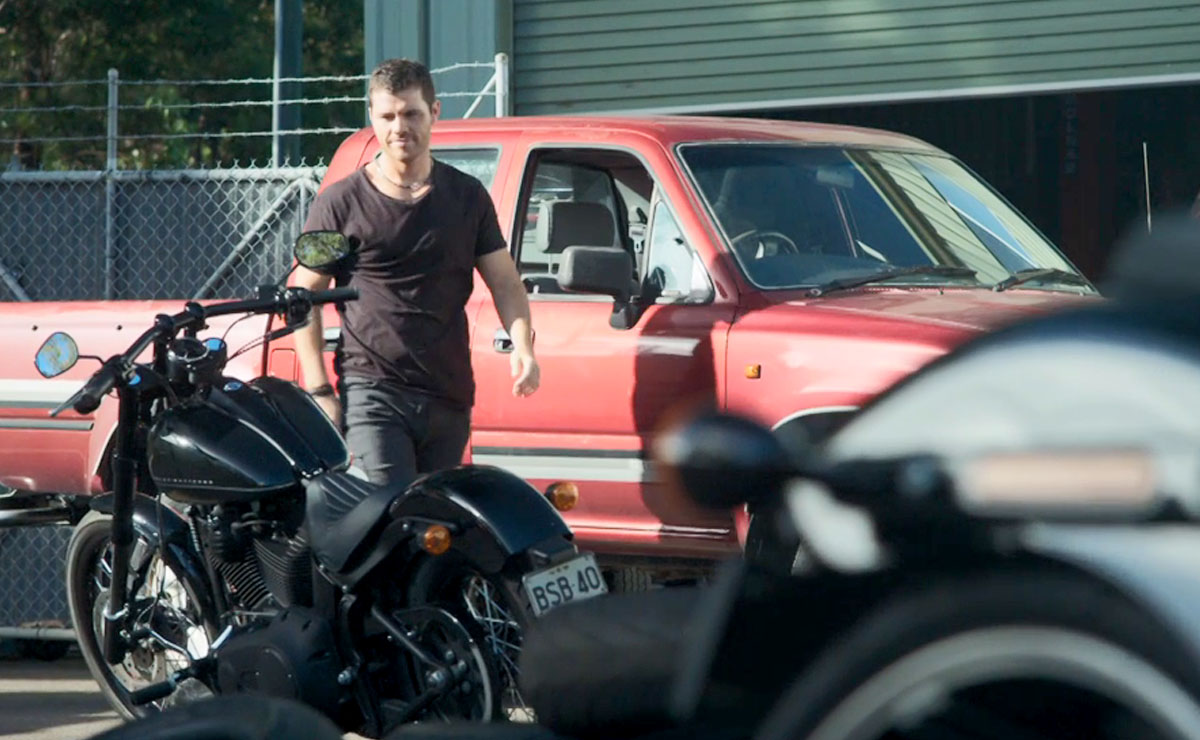 Having swiped the photo, Tex shows it to one of the fellow bikies, who confirms that Ari is the man who they’d been looking for. 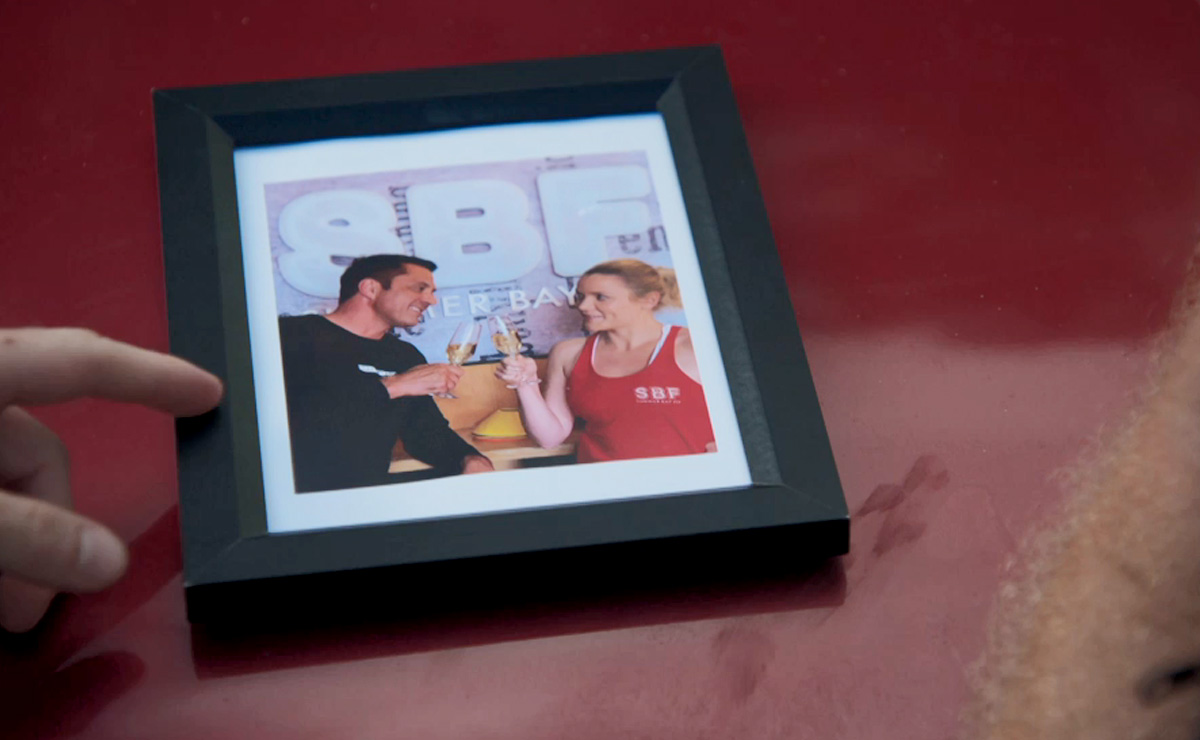 Tex explains that he’s also dating the local policewoman, which is bound to come in handy as his interest is laid bare…

Tex’s friend states that they’re going to get the money back that Ari stole from them! 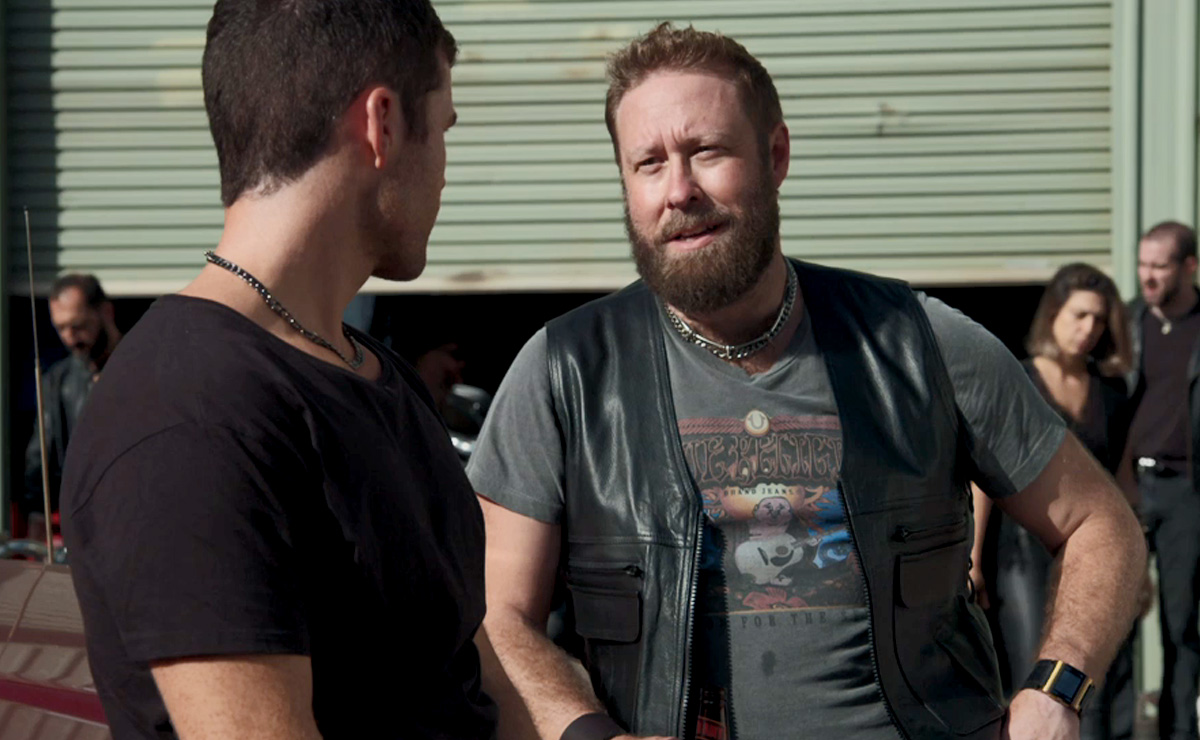 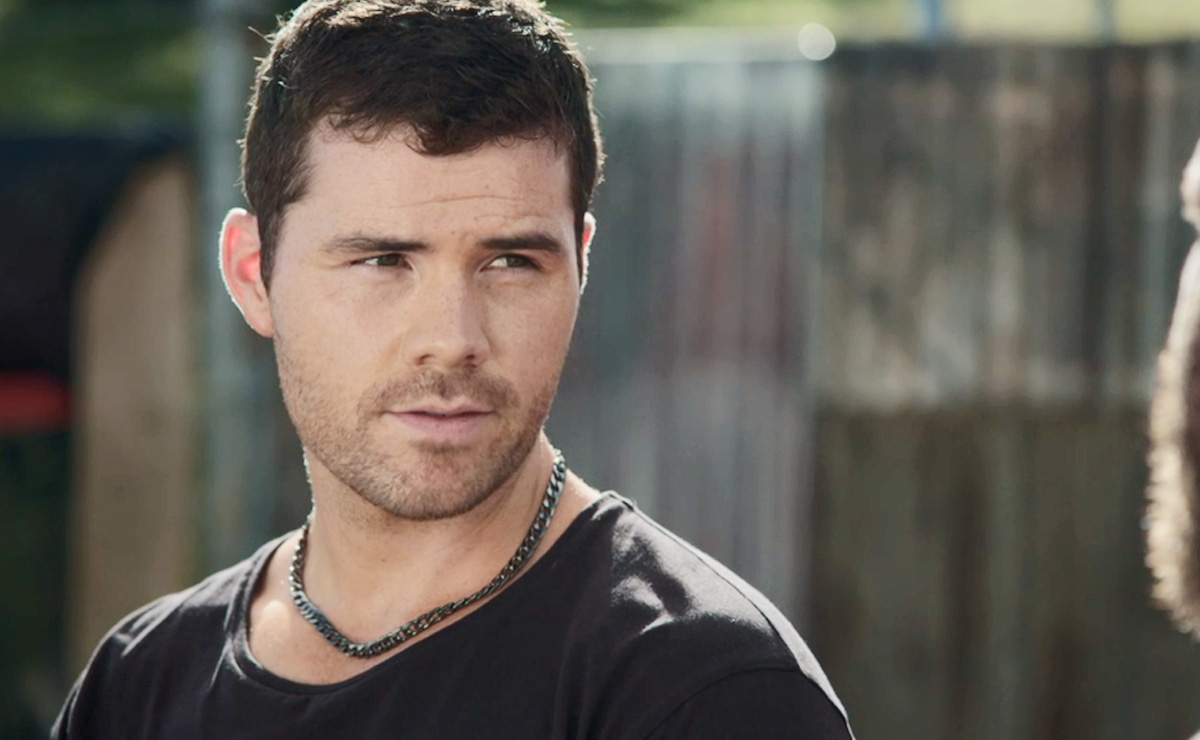 It’s no secret that Ari had spent a decade in jail for armed robbery before his arrival in Summer Bay.

When he and Mia were looking for ways to buy the gym, Mia decided to use money from the robbery that had been hidden away in a lock-up for the past decade. 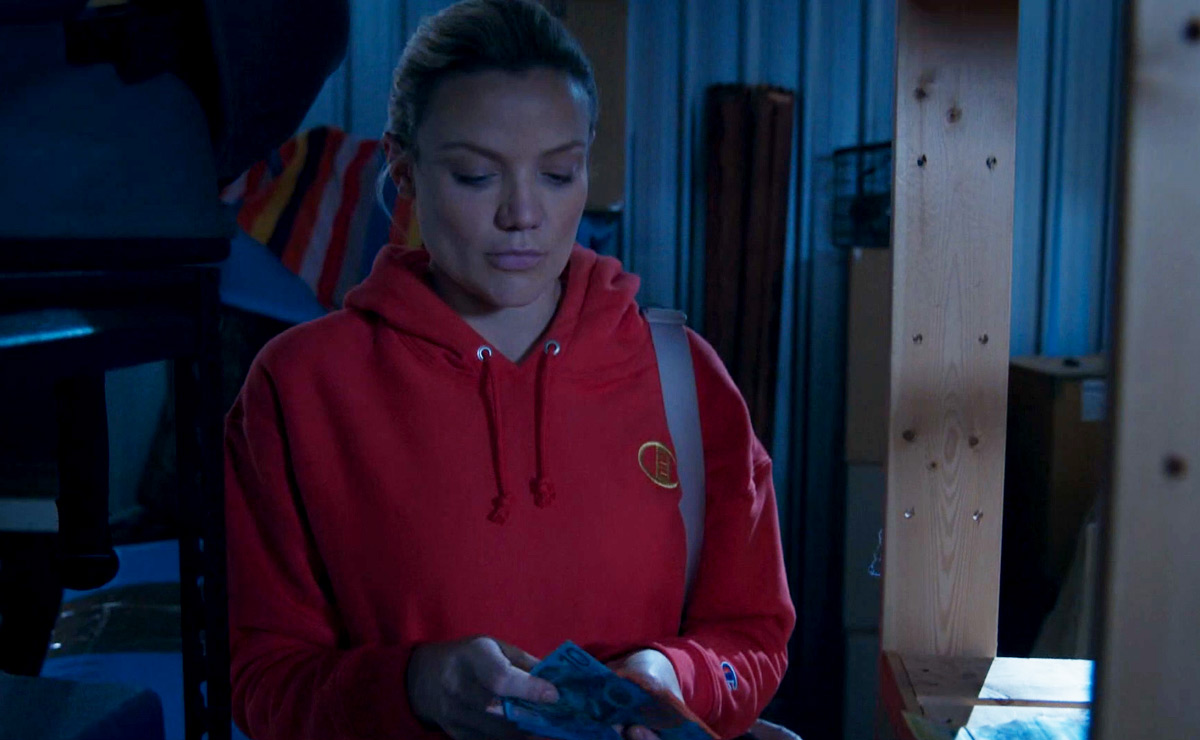 Ari was initially dead against using it—he’d moved on from that life. However, feeling that the purchase of the gym would provide a good foothold for beginning their planned adoption, he reluctantly agreed to launder the money with Tane’s assistance.

Coincidentally, Ari’s stepdaughter Chloe (Sam Barrett) has recently learned about the dodgy cash herself, after she started doing the gym’s accounts and questioned how Ari and Mia had managed to afford to buy it in the first place.

It seems that the bikie gang are determined to get it back, regardless of whether Ari is dead or alive…

Tane is concerned when the photo later shows up on his car, with an ominous note—”Your brother stole our money. We want it back” 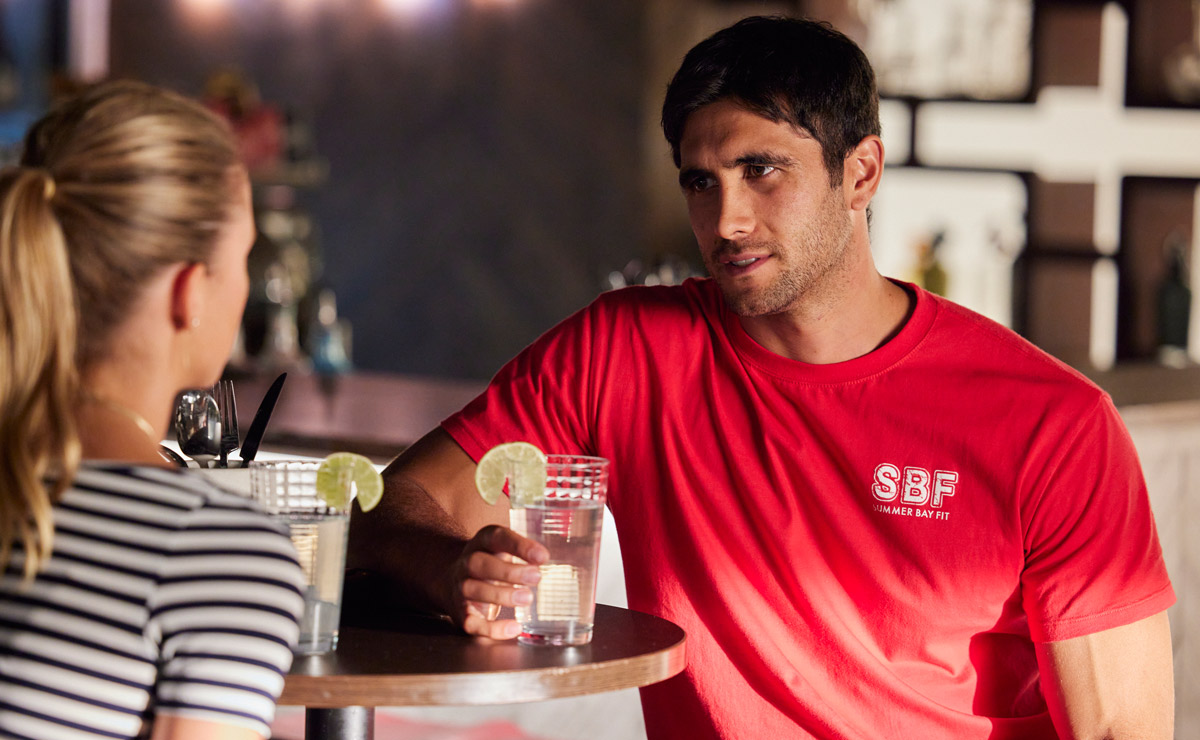 “He’s a bit confused and slightly rattled,” Ethan revealed to Yahoo Lifestyle. “He doesn’t want to jump to conclusions, but he doesn’t have a good feeling about what it means.”

When Tane agrees to meet the gang alone, they place a bag over his head and throw him into the back of a van—what’s Tane getting into? 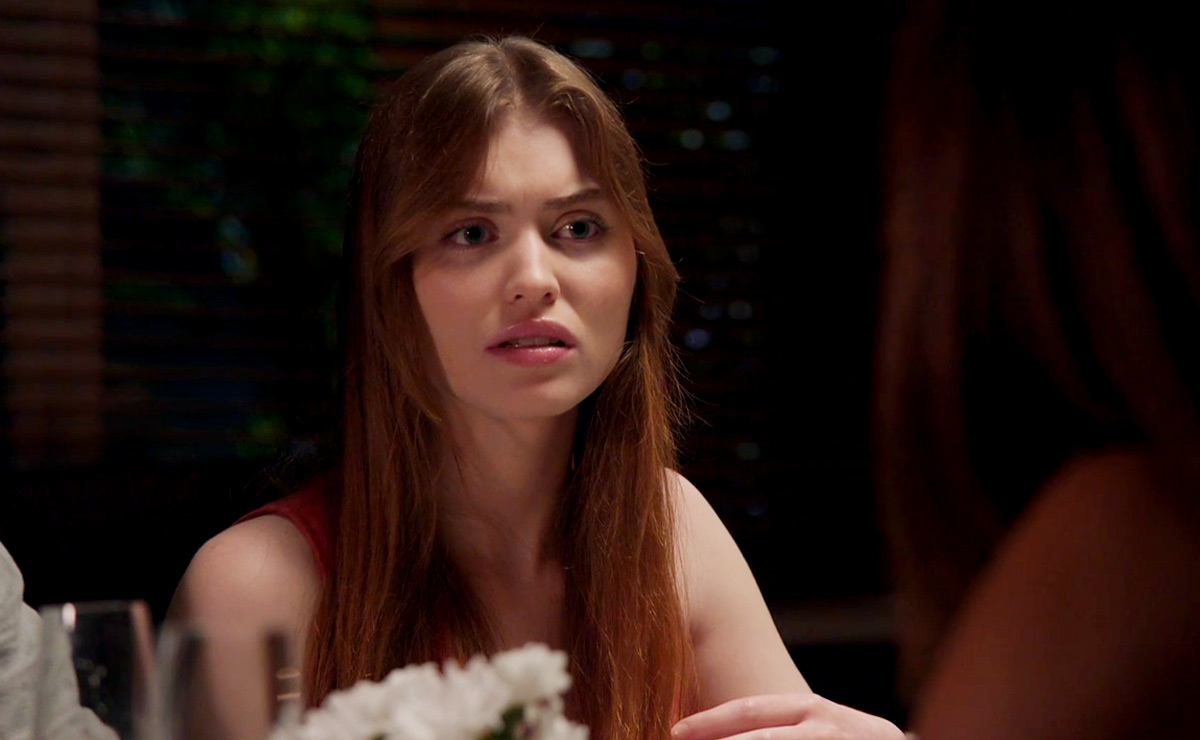 If that wasn’t enough, Tex’s attention then turn to Chloe, when he learns that she is Ari’s stepdaughter. Keeping her under close surveillance, he soon learns where she both lives and works….

“Whānau (family) is everything to Tane.” Ethan added. “His core beliefs and needs revolve around family and taking care of them, so he’ll do whatever he needs to do to protect them. Even if it means putting himself in serious danger.”

Are Tane and Chloe about to pay for Ari’s crimes?

A highly-strung Cash snaps. Ziggy takes the driver’s seat. Is Tex who he claims to be?

Nikau loses the courage for his bravery award. Someone is watching Chloe. Rose gets lovesick for absent Tex.