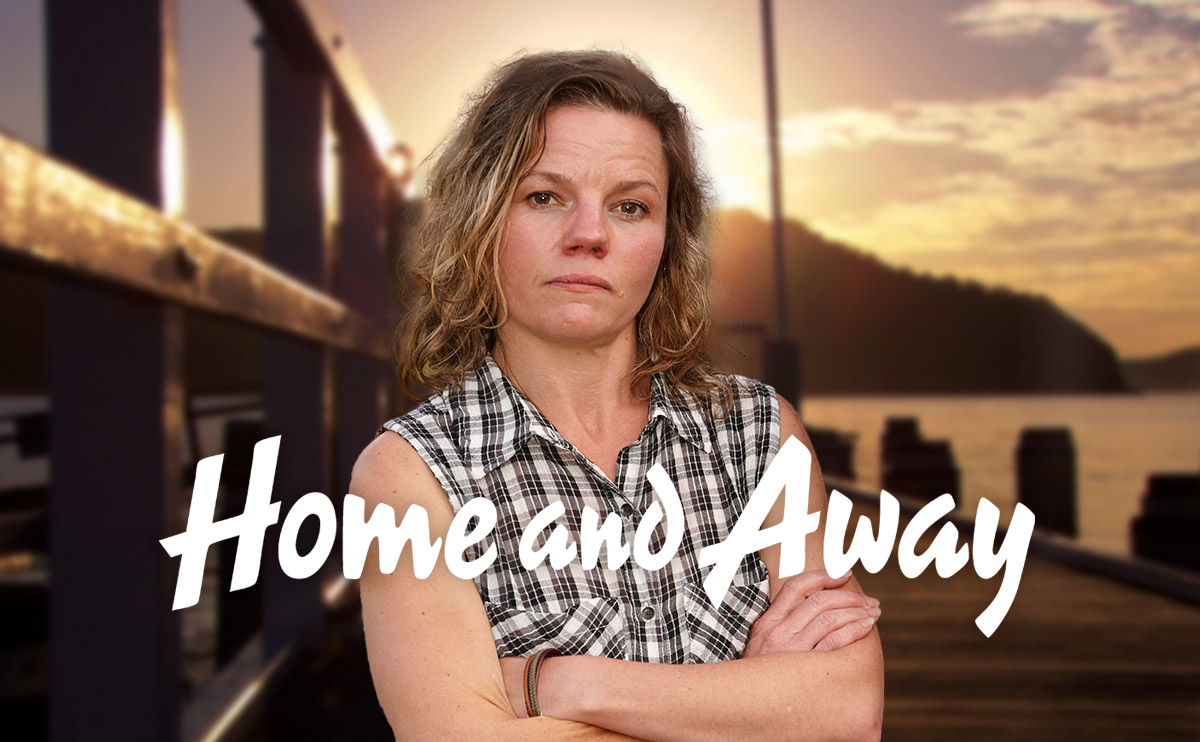 Coming up next week on Home and Away in the UK, Dean’s mother Karen turns up in Summer Bay with a secret, but Dean has a revelation of his own…

As this week’s episodes come to a close, Dean Thompson (Patrick O’Connor) receives an unsettling phone call to say that his mother, Karen (Georgia Adamson), has gone missing. Karen’s neighbour hasn’t seen her for several days, and knowing Karen’s struggle with her mental health—a result of schizoeffective disorder—Dean goes on a mission to find her.

Karen was last seen in Summer Bay back in 2019, when she turned up unannounced having been released from her psychiatric clinic. She was not only shocked to learn that Dean had tracked down his father Rick Booth (Mark Lee), but also by the fact that Dean had a newfound half-sister Mackenzie (Emily Weir) living in Summer Bay. 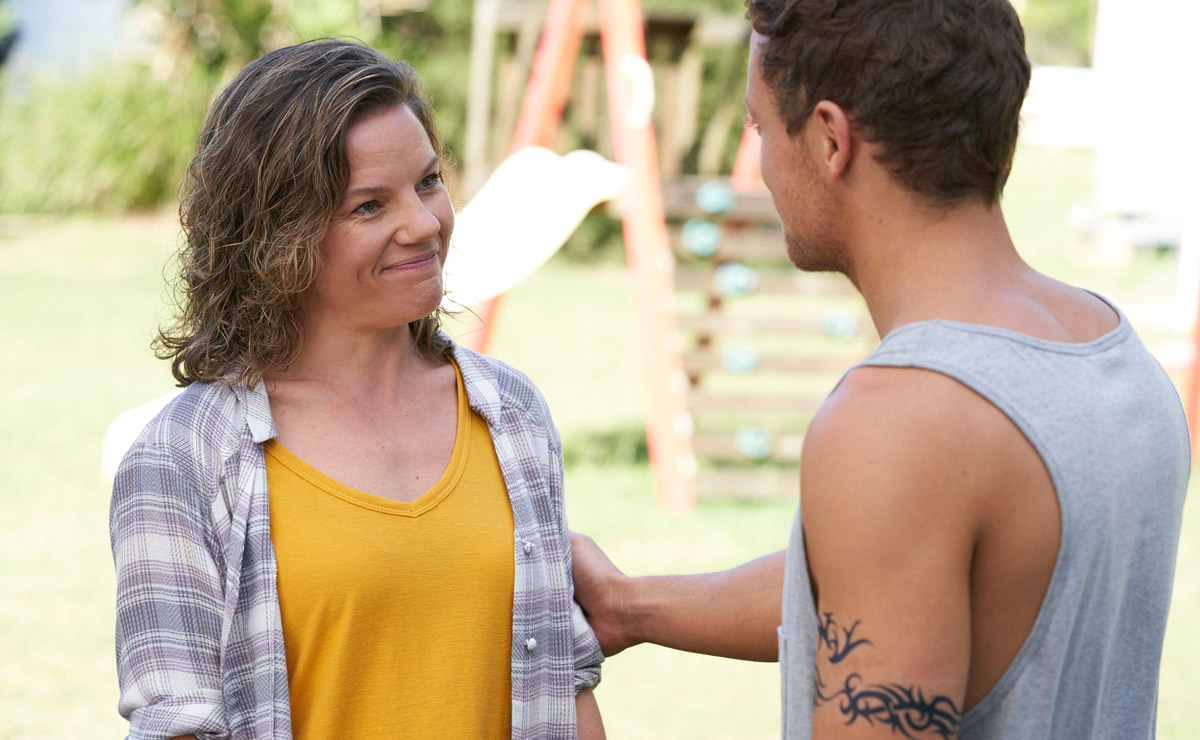 Mackenzie tried to extend an olive branch by offering Karen a job at Salt, but came to regret it when Karen poured a jug of water over John Palmer’s (Shane Withington) head before collapsing. When she left town to take up a job in Reefton Lakes, Dean discovered she had actually checked herself back into the clinic.

Back in the present, Dean continually tries to get through to Karen’s mobile whilst Ziggy (Sophie Dillman) calls the Reefton Lakes leagues club where Karen works—to be told that Karen hasn’t shown up for a few days. Knowing that she also hasn’t checked back into the clinic, and with Karen’s phone later disconnected, all Dean and Ziggy can do is head to Mangrove River in an attempt to track her down.

When they return a few days later we learn that their trip has proved fruitless, with no-one who knows Karen having seen her.

So it comes as something of a surprise to Dean when, as he has a go at John for offering up some unhelpful advice, John meekly points out that Karen is standing right behind him! 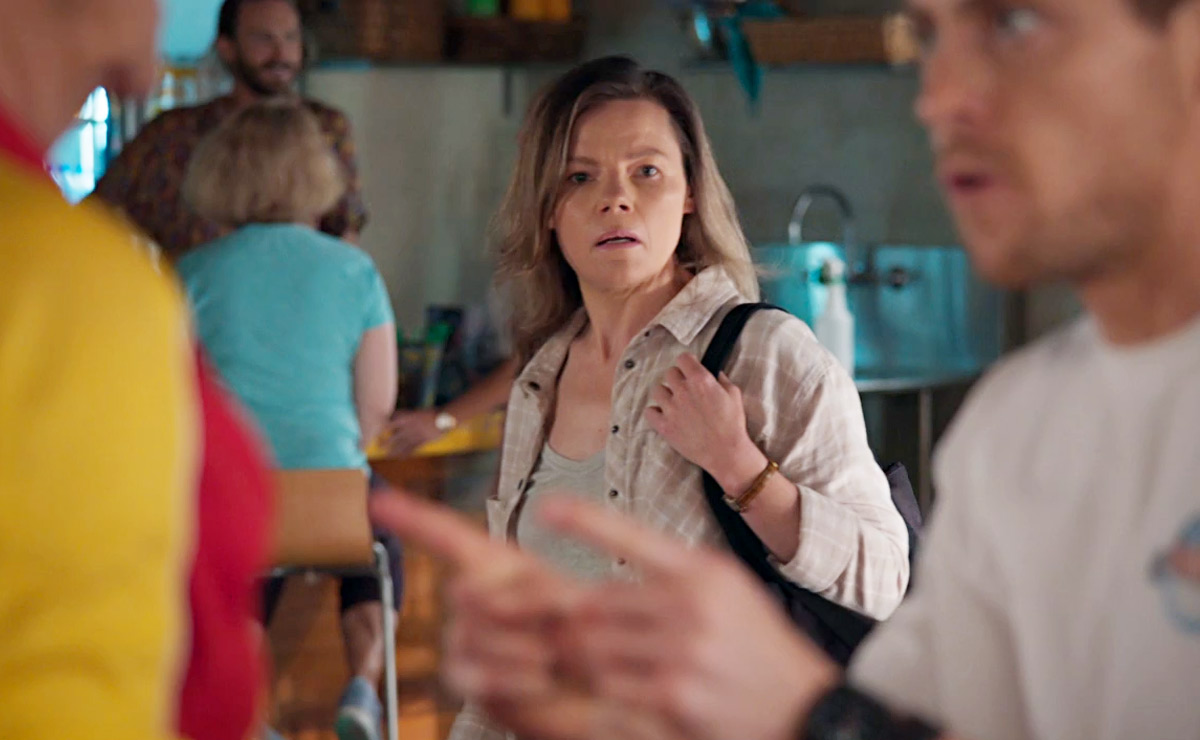 “What the hell is your problem Deano?” she exclaims. “Quit calling me, quit stalking everyone I’ve ever known… what is the big emergency?!”

Storm Karen is back! 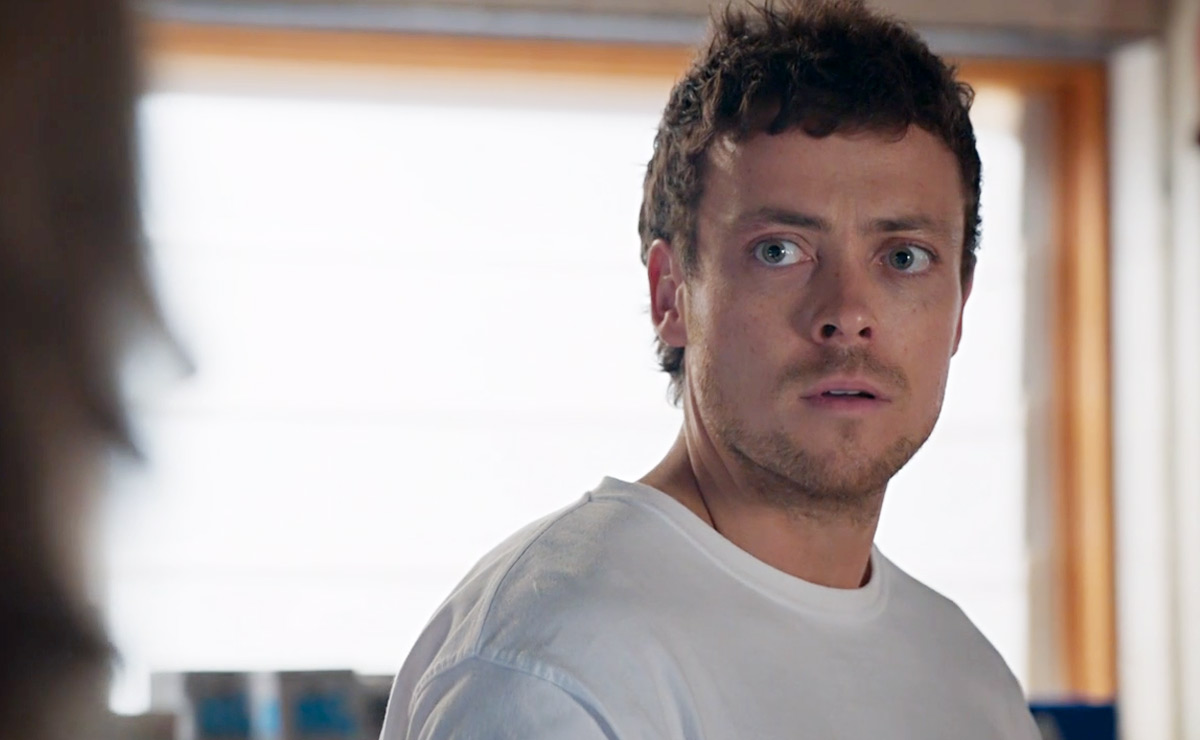 As the two catch up in Salt, Karen is evasive, simply stating that she didn’t feel like talking to anyone as Dean asks why she disappeared.

Dean is initially frustrated at his mother’s vagueness, but he ends up being just as vague when Karen counters by asking what has been going on with him . He quickly remembers that not only does Karen not know about the car accident which nearly killed him, but she also has no idea that she’s a grandmother.

Dean only discovered he was a father himself 18 months ago, when his ex-fling Amber Simmons (Maddy Jevic) arrived in town, revealing that her 5-year-old son Jai (River Jarvis) was a result of their hook-ups back in their Mangrove River days. 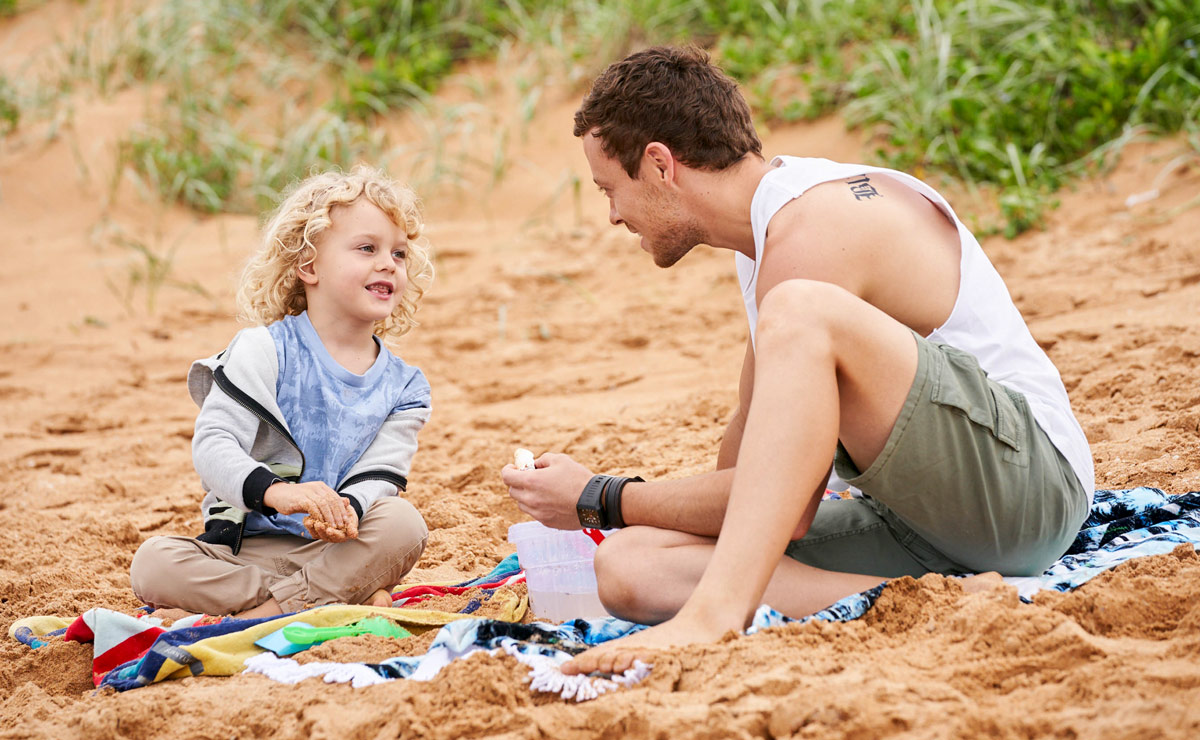 Now 7 years old, Jai has never met Granny Thompson, purely for the fact that Amber has expressly forbidden Karen to be a part of his life. Amber remembers Karen at her worst, and despite Dean’s assertion that Karen is no longer the loose cannon that she once was thanks to her treatment, Amber refused to budge.

It broke Dean’s heart knowing that he’d have to lie to his mother, but he had no choice as Amber threatened to cut him out of Jai’s life completely if he didn’t comply.

As Dean quietly offloads to Mac about his dilemma, she observes that he and his mother are just as bad as each other when it comes to keeping secrets.

John nearly drops Dean in it when he mentions all the ‘drama’ that has been going on, but it’s soon forgotten as Karen receives an unwanted phone call. She demands to know how the caller got her number, and is shaking in anger as she complains about the situation she’s been put in. 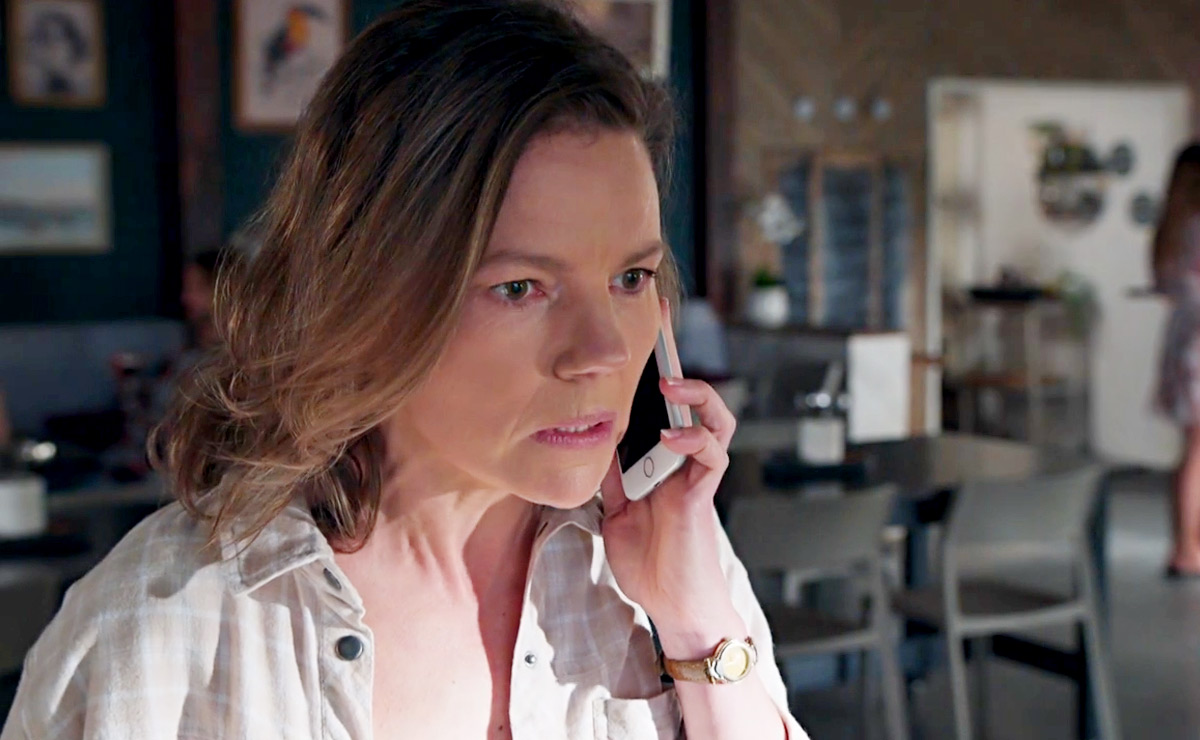 Karen warns the caller to leave her alone and hangs up, but Dean has heard everything… he fears the worst as he asks whether his mum is in trouble, and she admits that she is on the run from a guy named Brett.

Dean demands she tell him everything! 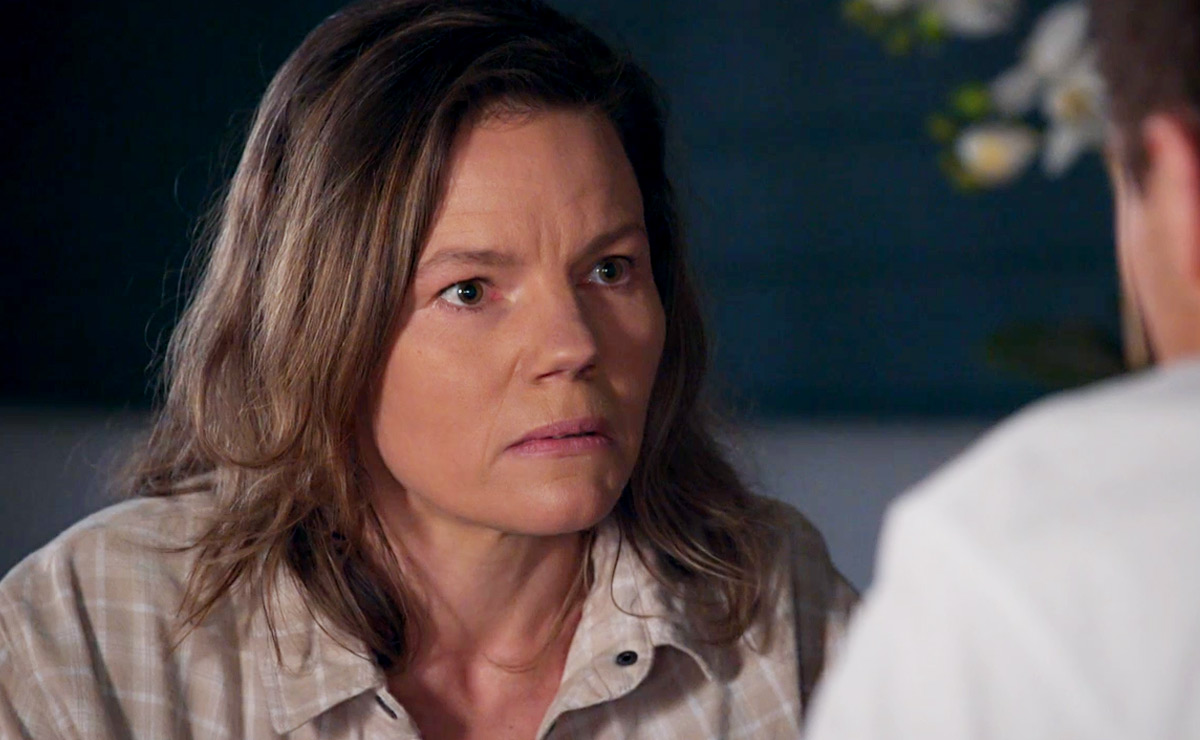 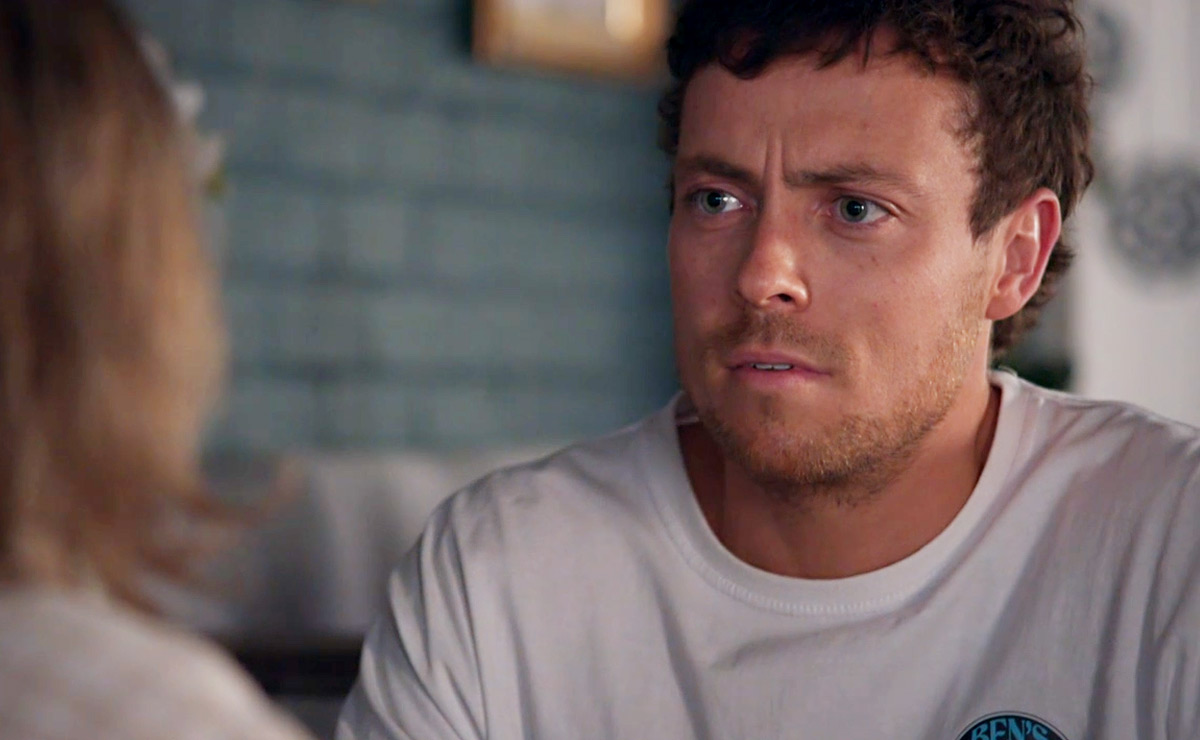 He’s floored when Karen then reveals the real reason why she’s on the run…. Brett has asked her to marry him!

She goes on to explain that she met him at the leagues club and, much to Dean’s surprise, has been seeing him for about a year. But whilst Karen explains that Brett is the perfect gentleman, she claims that she’d probably just break his heart. 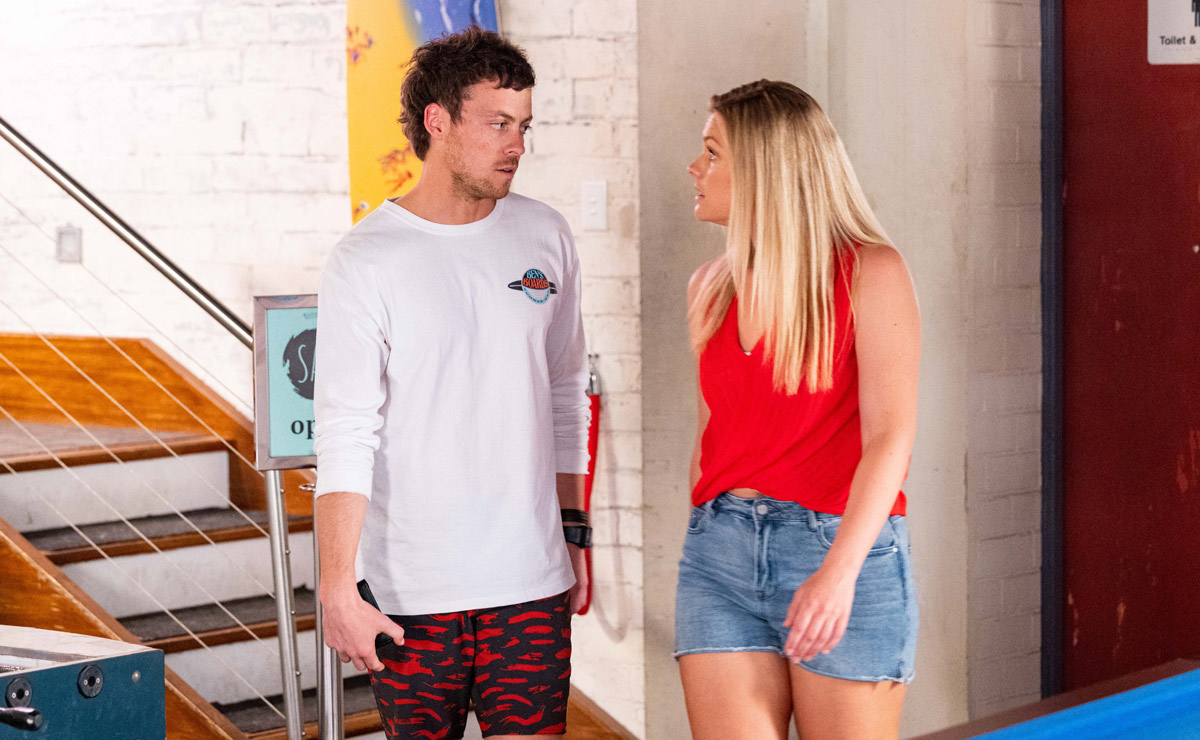 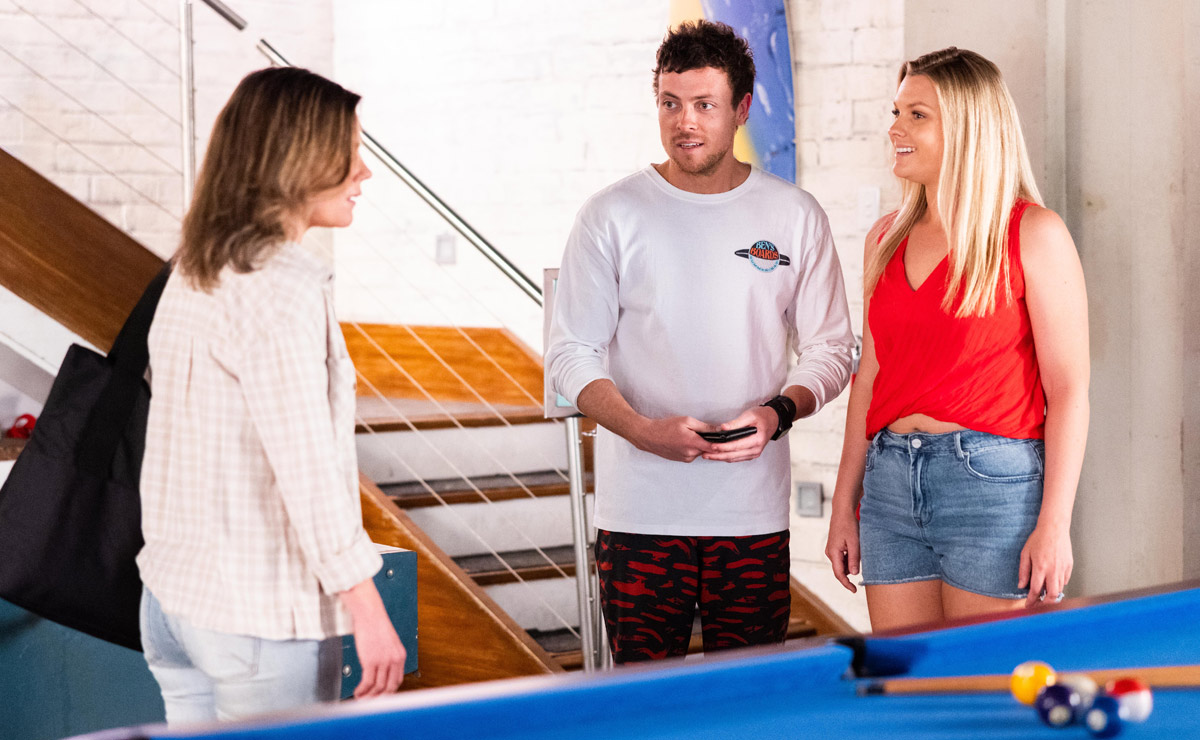 Ziggy nearly blows Dean’s secret when she comes close to mentioning Jai, and Dean manages to change the subject just in time.

However, when they agree to let Karen stay with them at the farmhouse, they suddenly realise that they’ll have to give her Jai’s room… and it’s full of his stuff! 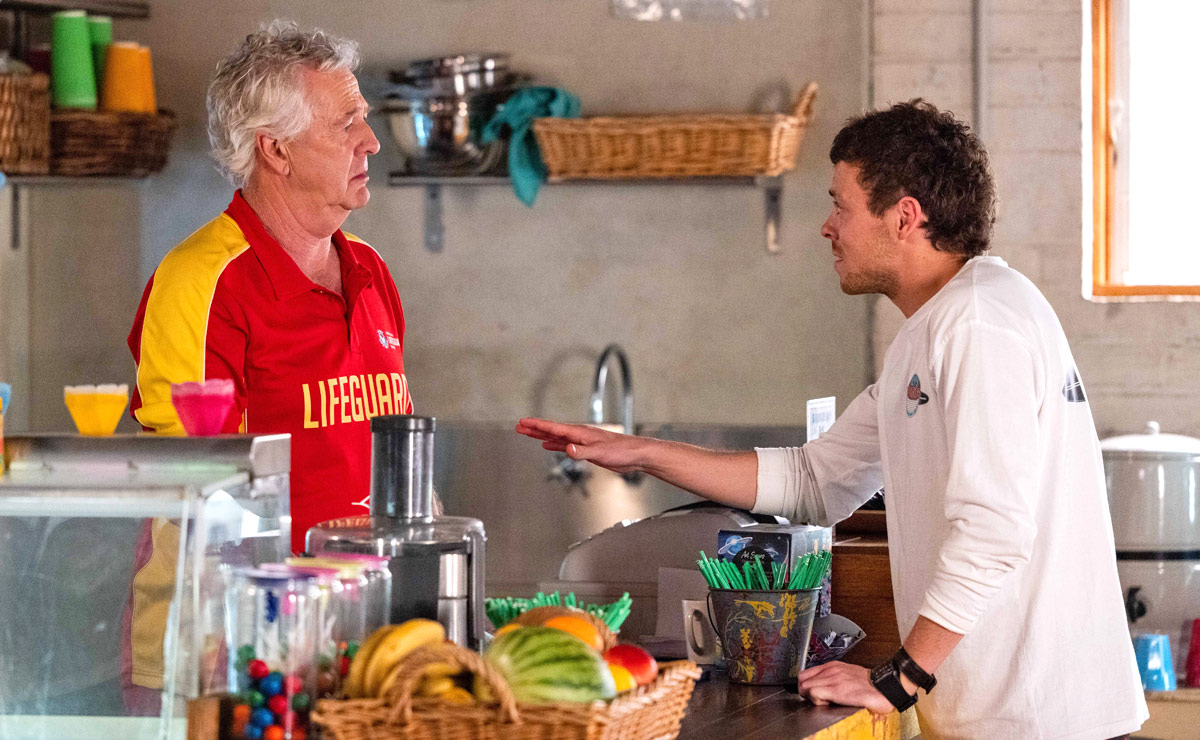 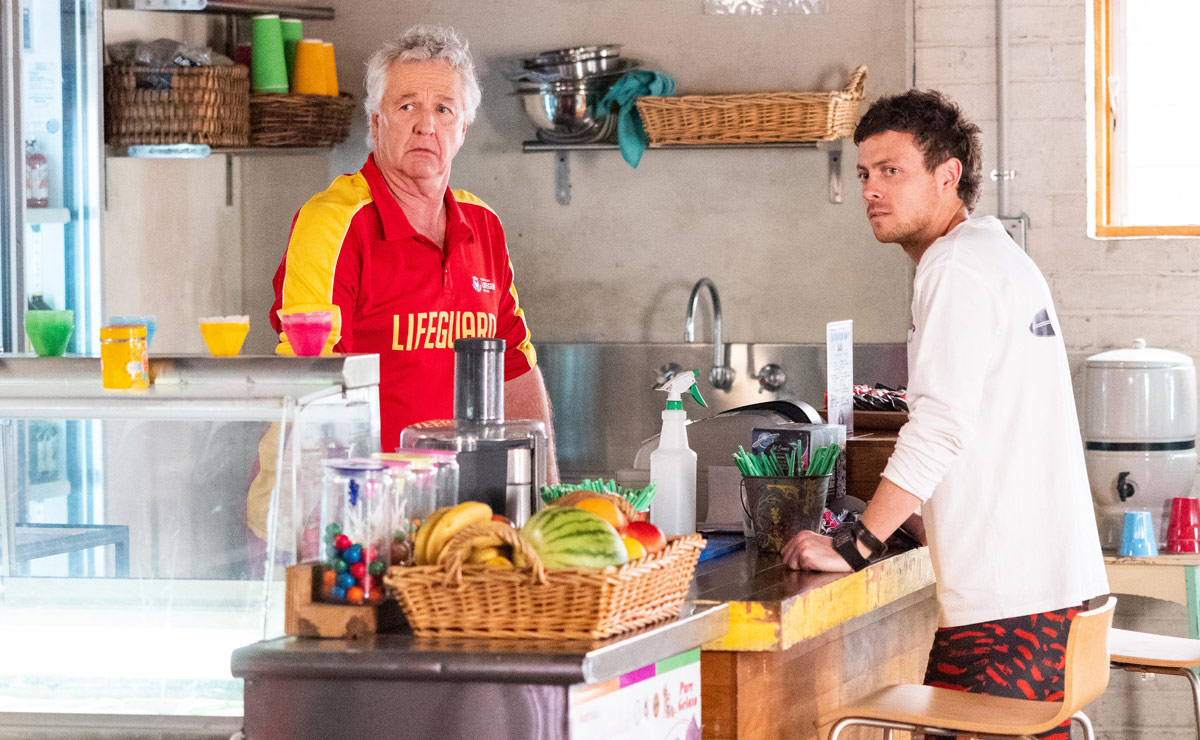 Dean quickly enlists John (with the help of $50) to help distract Karen, as he and Ziggy rush back to the house to remove all traces of Jai. 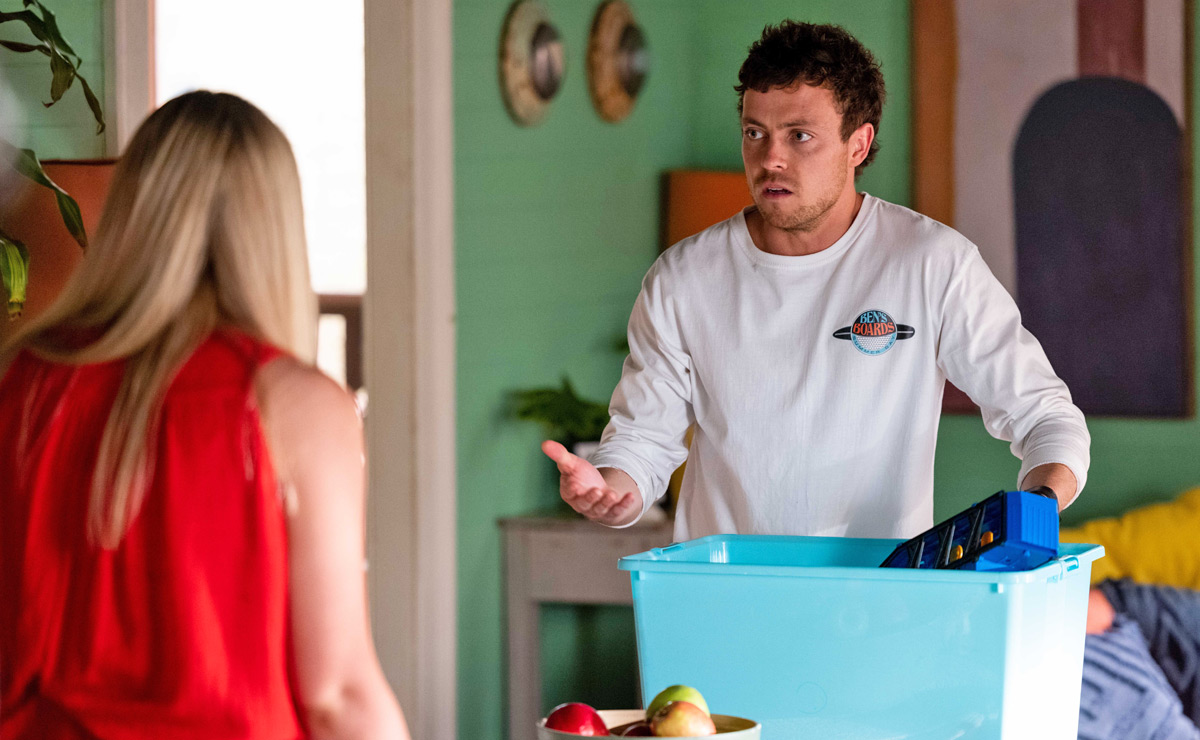 But as a bemused Karen has a drink with John in the diner, his dubious claim that he enjoys her company is enough to make her realise that Dean put him up to it—and she demands to be taken to the farmhouse immediately. 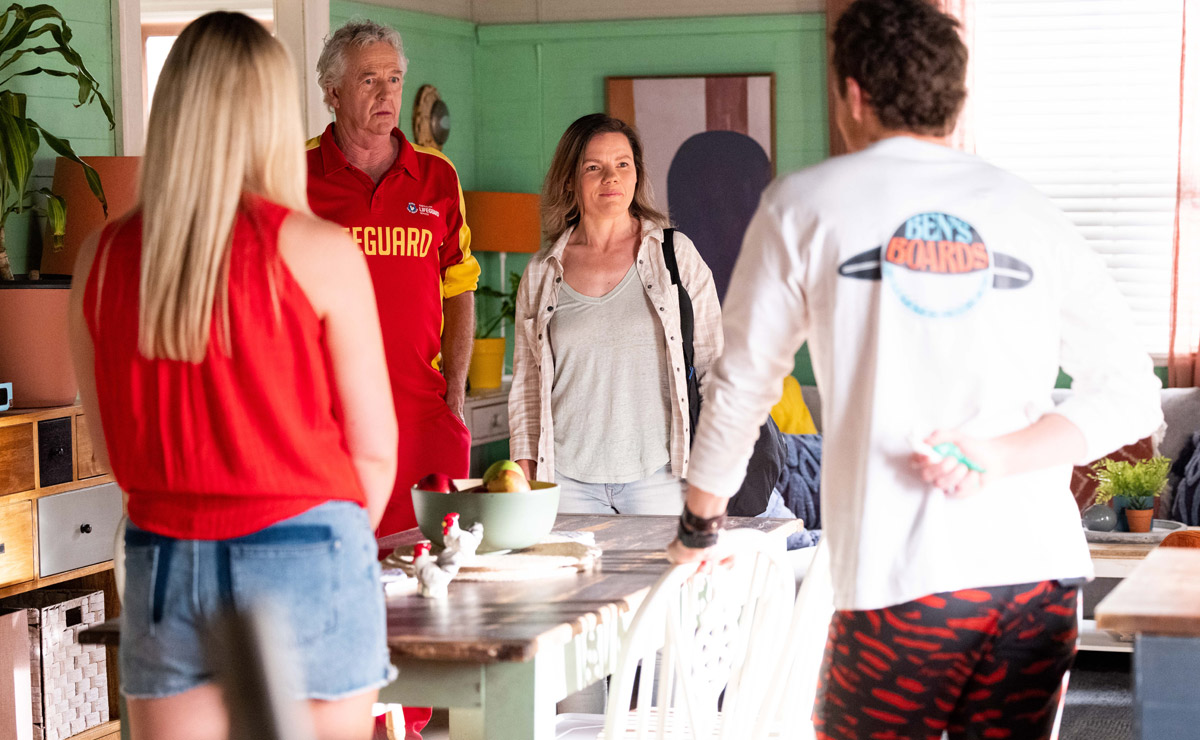 Dean and Ziggy have completed the clearout just in time, but they fail to notice that a photo of Dean, Amber and Jai has fallen under the kitchen table. 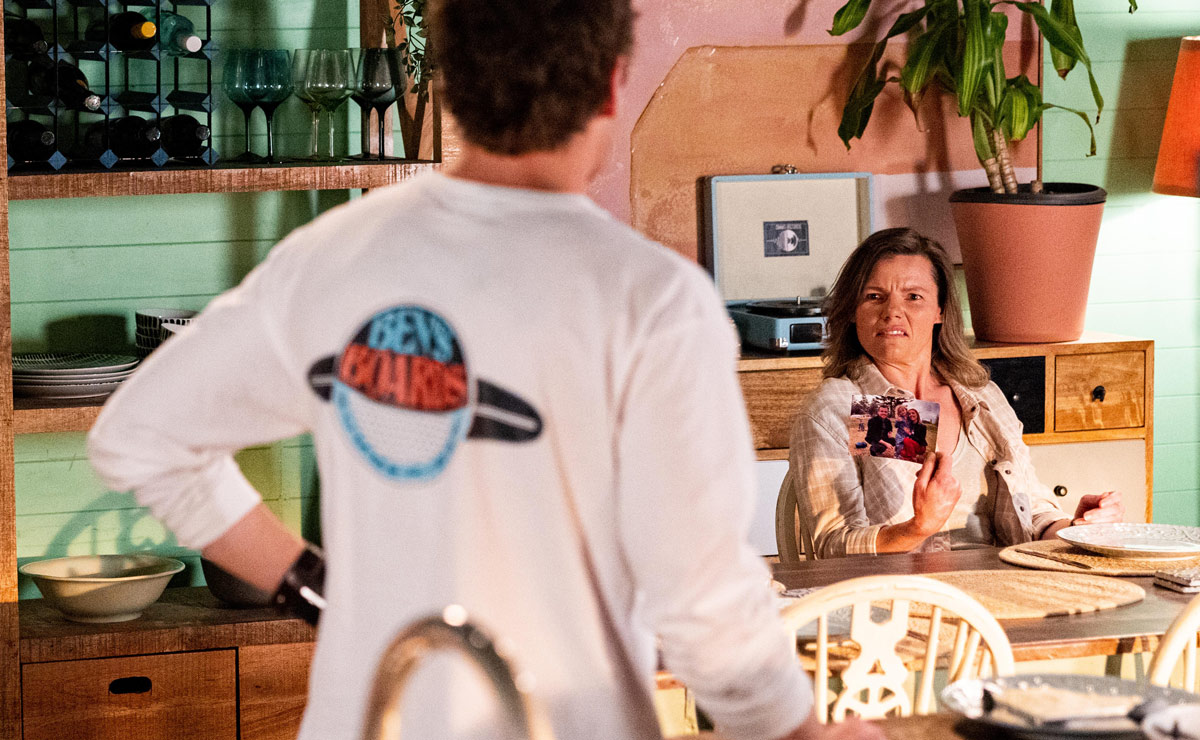 When Karen later picks it up, she wonders what why Dean is looking so chummy with “that skank” Amber, and who the child is.

Ziggy starts concocting a story but Dean knows the game is up, he has to tell Karen the truth…. she is a grandmother. 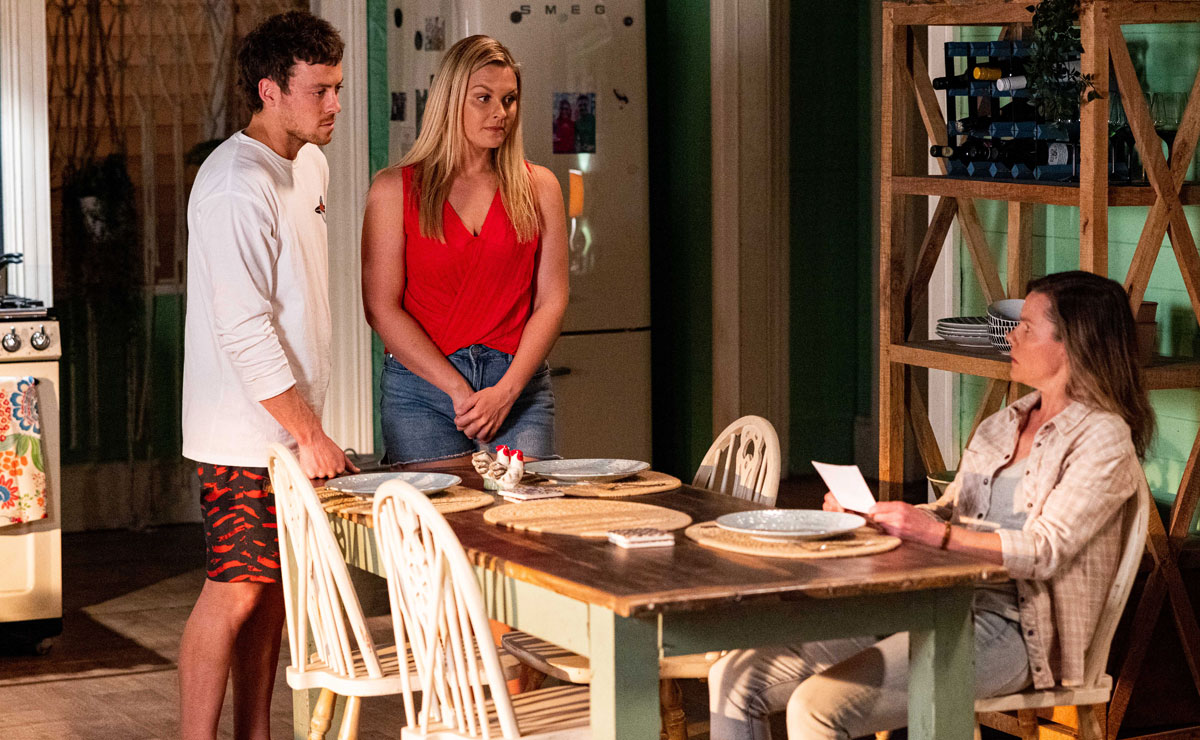 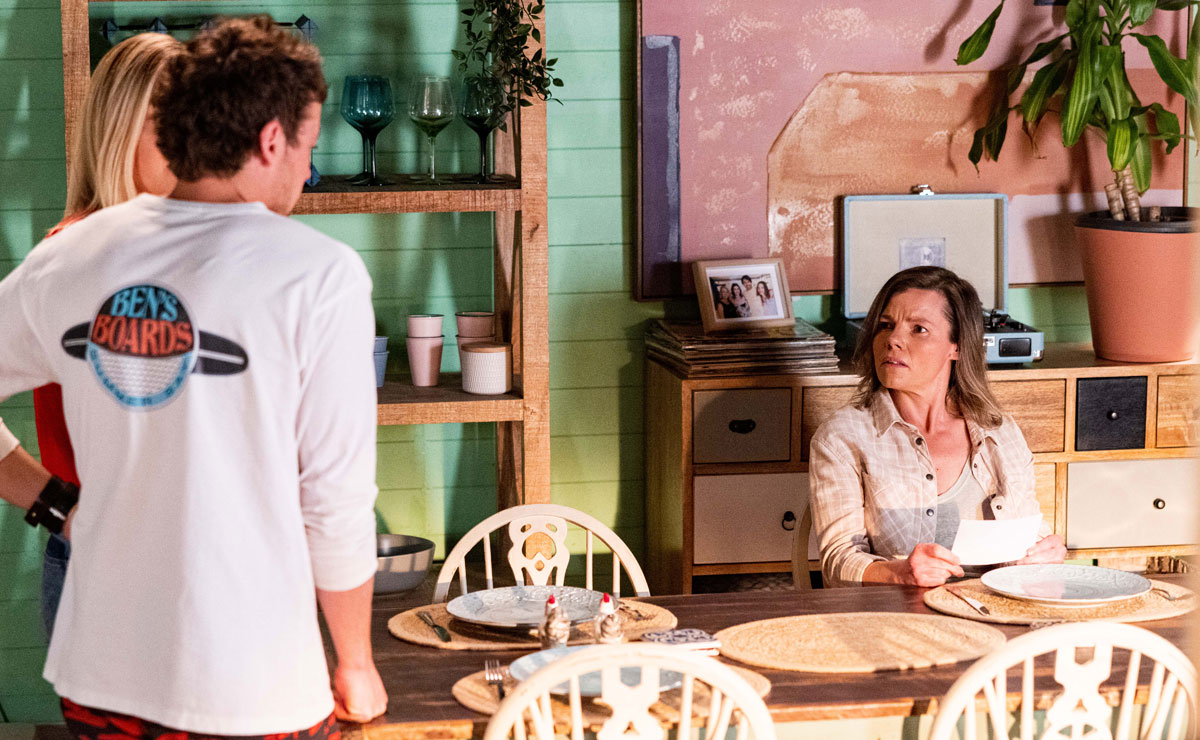 When Dean then goes on to tell a shocked Karen about Amber’s ultimatum, her reaction surprises him. Rather than kick off, Karen calmly says she’d have done the same thing.

She knows that she was a mess back in the days when Amber knew her, and doesn’t blame her for wanting to keep Jai away. 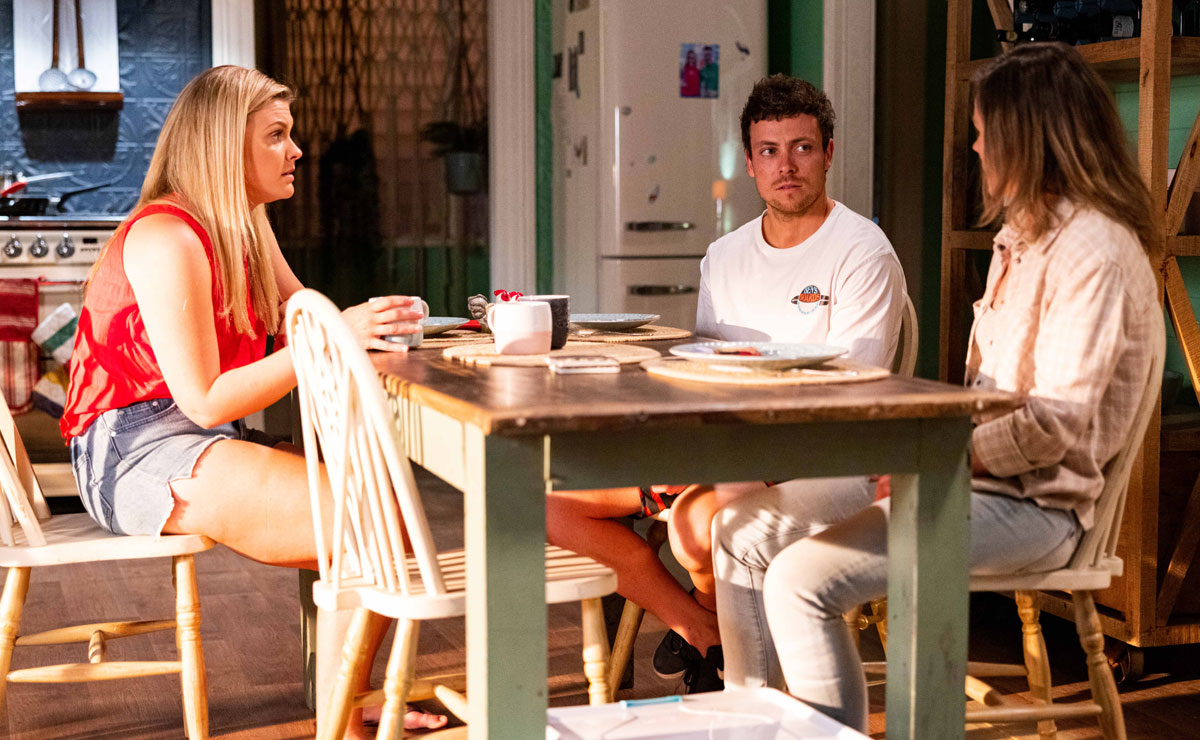 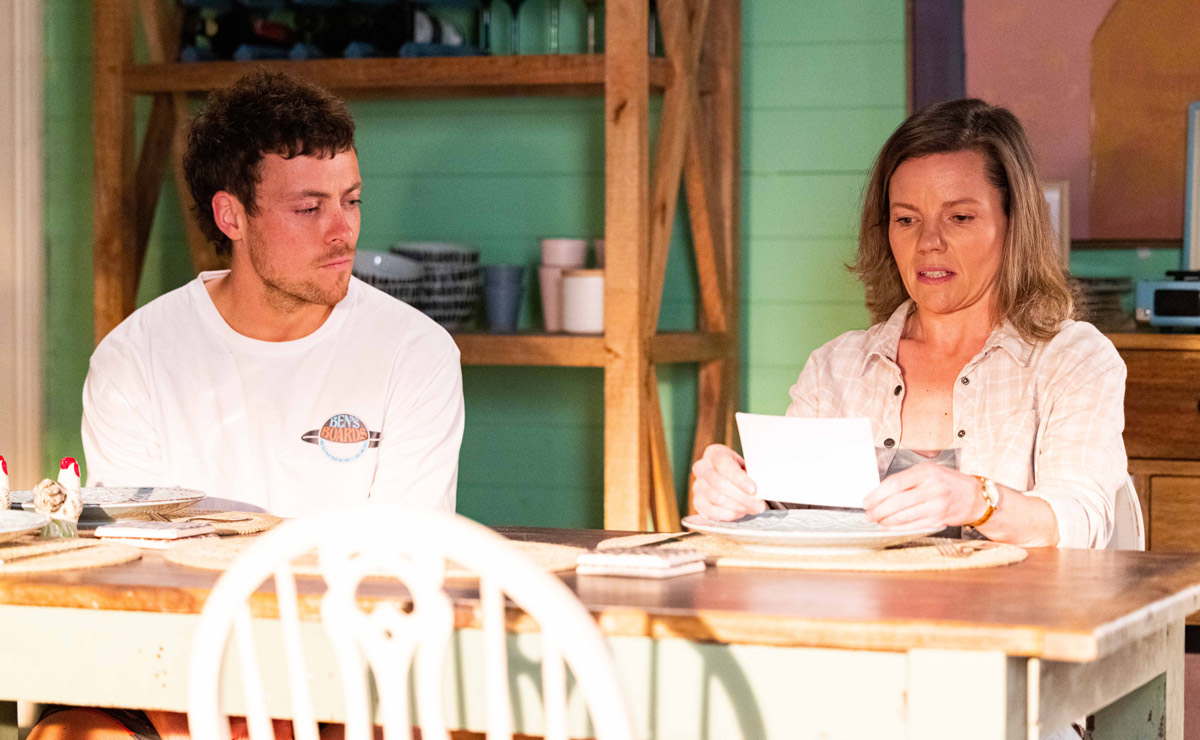 Karen wistfully comments that Jai would be much better off without her presence in his life… as would Brett. 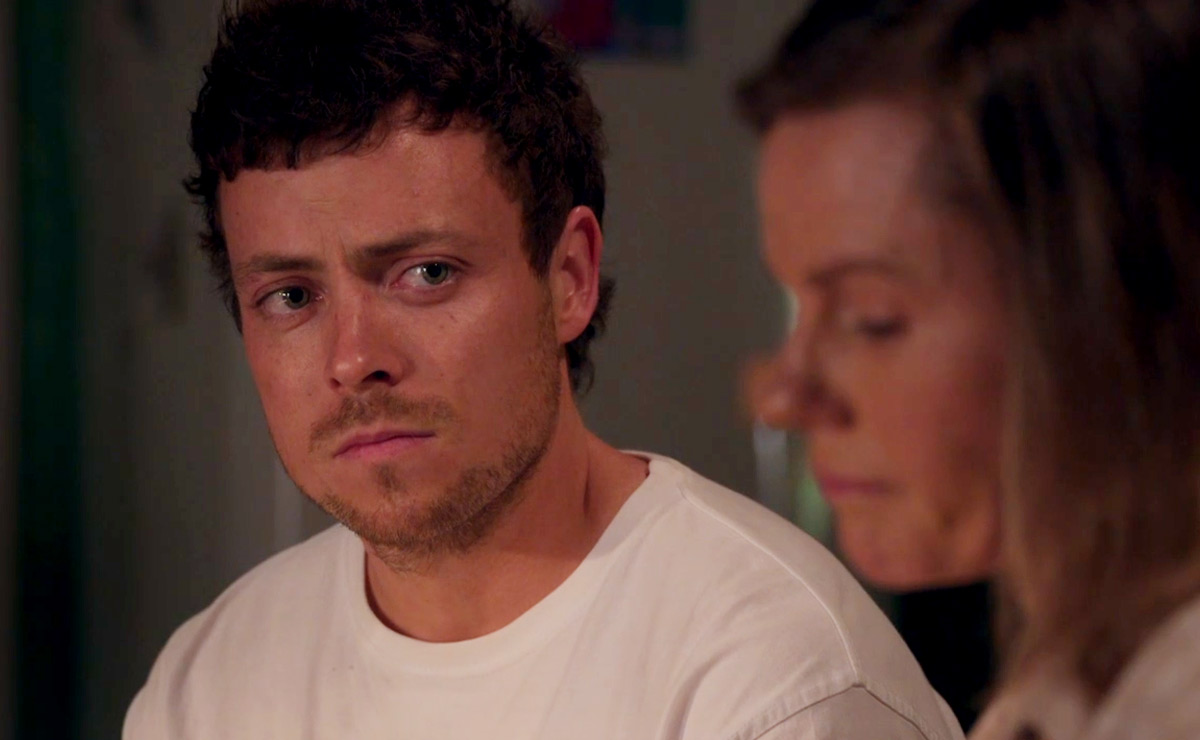 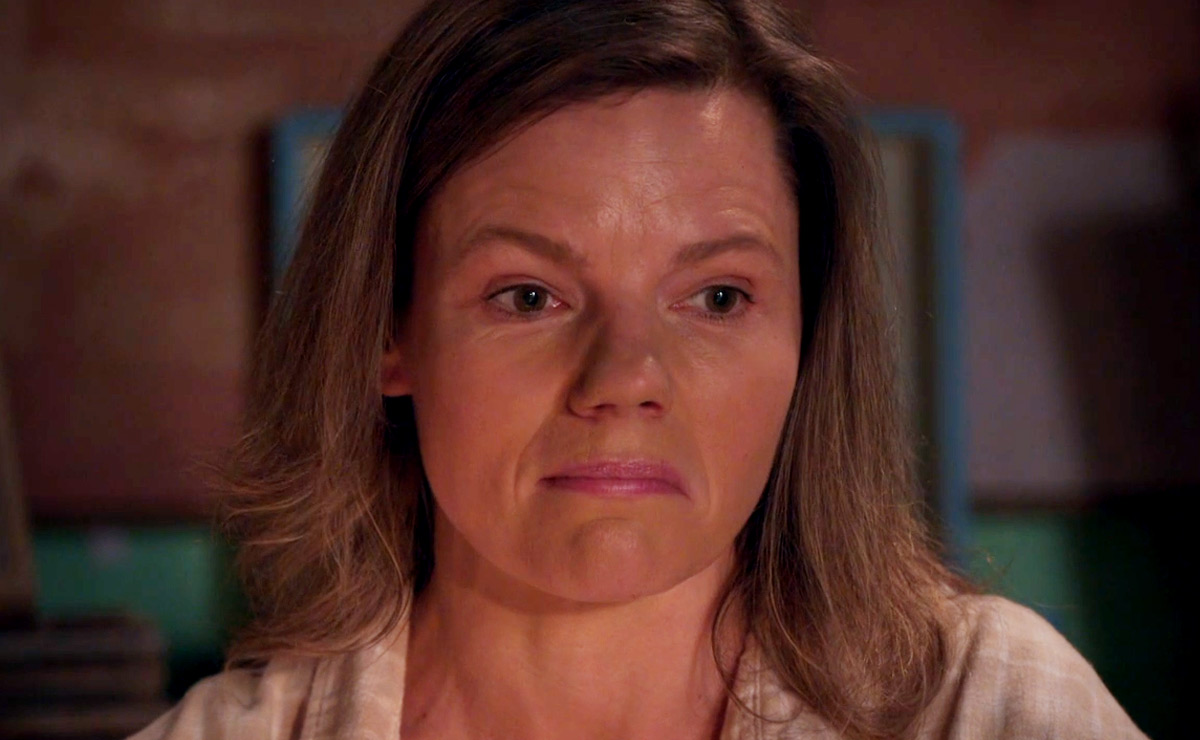 Both Dean and Ziggy are heavy-hearted as they watch Karen go to her room and shut the door—they weren’t expecting this.

With Karen clearly at a very low point, will Dean and Ziggy be able to help her regain some self-confidence?