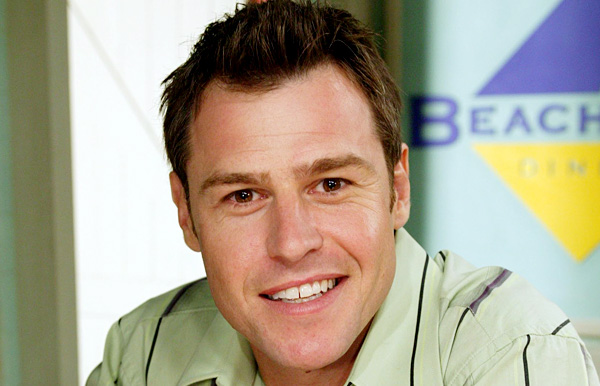 Hugh first arrived in 2006 as a childhood friend and at on stage, boyfriend of Rachel Armstrong. Rachel invited Hugh for lunch at Leah’s place, and he immediately took a shine to her. Upon finding out that her and Dan had broken up, Hugh subtlety asked Leah out on a date. She declined but later on, went on a lunch date with him. They ended up kissing at the Surf Club, which Dan saw.

Leah later admitted that she did like Hugh but didn’t feel that there was really anything there. From then on, Hugh just sort of disappeared supposedly never to be seen again…until 2007 that is.

Hugh returned to the Bay and Rachel was ecstatic to have her old friend back. Rachel let him know that Dan and Leah were back together but Hugh was quick to remind her that they weren’t together for very long. He also said that he had just ended a relationship that didn’t work out.

Kim and Rachel were going through a rough patch in their marriage when Hugh arrived so as any friend would do, he often listened to Rachel when things weren’t going too well. He even organized a picnic for them!

When Rachel saw Hugh and Nurse Julie joking around at the hospital she hatched a plan to get them to have dinner together. She organized lunch, which in the end turned out to be very uncomfortable for both of them. They both knew it was majorly obvious that Rachel was trying to set them up.

After they had breeched the uncomfortable stage, Julie asked Hugh whether he still felt something for Rachel. He said that he didn’t and Julie apologized for asking.

Later on at the hospital though, Hugh got edgy when Rachel asked him about the dinner. Rachel was shocked at his reaction and when she asked him why he reacted like that, he said that he was still trying to get over his break up with this girlfriend….or that’s what Rachel thought.

With baby Archie being born, the strain on Rachel and Kim’s marriage was undoubtly showing, but they were managing to pull through…just.

When Rachel found out that Hugh was looking for somewhere to stay, she was quick to say that he could stay with her and Kim. He was unsure at first, but then accepted her offer.

A few days later and Hugh and Rachel attended a medical conference which ended with a not so sober Rachel talking about herself and Kim. She even said that she thought her and Hugh were more suited than her and Kim.

The next day, Hugh left Rachel at the conference so that she could recover from the previous day. Upon receiving a phone call from Rachel, Hugh said that he had to get ready to carry out an operation in theatre, although from the expression on Hugh’s face, that wasn’t what was actually happening.

When Rachel had returned from the conference, Hugh told her that he was moving out. This came as a shock to her but she quickly managed to convince him to stay.

Rachel then found out that Hugh didn’t really have an operation to carry out earlier that day, which left her unsure about why he didn’t tell her in the first place.

Things between Hugh and Rachel carried on getting pretty weird. Rachel spoke to Brad and asked him why he thought he was acting that way. He brought up the fact that maybe he still liked her, but she wouldn’t hear of it.

To try and relieve some of the tension, Hugh organized a boy’s night out with Kim, Tony and Ric. They could quickly see that a woman seemed interested in Hugh. He went over to see her which led to them talking.

The next day, Rachel got the fright of her life when she found Ingrid, the woman that Hugh was talking to the night before walking into her kitchen. She explained that her and Hugh got along really well and well, there she was.

Rachel wasn’t pleased and didn’t think Hugh was like that. They had a bit of an argument which later saw Hugh looking for somewhere else to live. It just so happened, that Martha was looking for a new flatmate.

Ingrid and Hugh spoke on the beach later that day, and he admitted that he was ’emotionally unavailable’.

After his chat with Ingrid, Hugh then told Rachel that he had found a new place to stay and that he was moving out.

With Hugh now living at Martha’s you would think that Rachel and Hugh would have been getting on better, but due to them having to work together that wasn’t the case.

After another argument with Kim, Rachel turned up at the Diner flat to talk to Hugh. When Rachel asked him why he was being so awkward around her he finally admitted his feelings towards her. She was shocked and was quick to tell him that he was just feeling that way because they used to live together and were still having to work together. After insisting that they were just friends, Rachel left the flat leaving Hugh wondering how she felt.

Martha and Hugh had a chat and he opened up to her about how he wanted to know how Rachel felt, one way or the other.

A few days had passed and after another few hundred arguements with Kim, Hugh asked Rachel if she would like to have dinner with him and Martha. She went but then she felt that she needed to speak to Kim so she headed back home. But after finding out that he was having a poker night with some of his mates she went back to the flat to speak to Hugh.

Hugh told Rachel that she could stay as long as she needed. She took him up on the offer and went for a nap in his room. A while later and Hugh could hear Rachel crying. She was obviously upset about how her and Kim kept fighting with each other and wondered how they were going to sort things out. After trying to comfort her, Hugh and Rachel kissed.

After waking up, Rachel said that she had to go. But High insisted that they needed to talk about what had just happened. Of course, Martha came in just at that moment.

The next day, Martha and Hugh talked about what happened and Jack from a distance was watching them and was clearly thinking that they were an item. But Martha assured Jack that she was just being a good friend and a good flatmate.

Even though Hugh wasn’t living with Rachel and Kim anymore, he still had to work with her. Hugh was congratulated by one of the nurses at the hospital on being given the chance to work in South Africa. He told her to keep it quite as he didn’t want anyone to know, especially Rachel.

Rachel and Hugh had an argument over the treatment of a patient who Hugh felt was being cast aside, because baby Archie needed to be treated at the same time.

Nurse Julie told Rachel about Hugh’s posting to Johannesburg, after he tore up an incident report relating to the previous matter with the patient. Rachel was surprised and Julie was also surprised that Hugh hadn’t told her, seeing as they were such good friends.

After giving Rachel an ultimatum of choosing what she wanted to do by a certain time, Hugh left Summer Bay for Johannesburg by himself, after waiting for Rachel to make a decision.