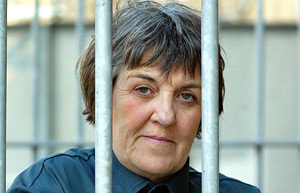 The first mention of “The Guv” came when Dani was serving time in prison and she and her cellmate Georgie were told that the prison top dog was being released from solitary confinement, and liked to make new girls feel welcome. Dani had her first meeting with the Guv shortly after when she accidentally sat in her place in the yard. Despite her intimidating behaviour, the Guv seemed to take a liking to Dani, dubbing her “princess”, and decided that she wasn’t the sort of girl who belonged in prison and had a chance of making a good life for herself outside. When Dani stumbled into the middle of an escape attempt and the subsequent investigation seemed set to ruin her chances of an appeal, the Guv lent on the real culprits to admit Dani hadn’t been involved, securing her release.

Dani continued to correspond with the Guv and mentioned to her the troubles she’d been having with Felix Walters. She soon had cause to regret this when someone put Felix in hospital and the Guv then wrote to her saying it had been sorted. Dani visited the Guv who admitted she had ordered the attack. She ended up having time added on to her sentence.

Some months later, the Guv contacted Dani asking her to come and see her in prison. Rhys insisted on going instead and returned with some surprising news: The Guv was dying from a heart condition and had been working on her autobiography, which she wanted Dani to write for her. Their plans hit a setback however as the manuscript was destroyed when Eric Dalby and Wazza Stevens set fire to the kiosk. Dani and Scott decided to go and tell the Guv what had happened in person and learned she had been moved to a hospital in the city. They were shocked to see how frail she had become and Dani agreed to help her reconstruct the manuscript. As the pair left her room, the Guv quietly told a concerned Scott that she would never deliberately hurt Dani.

Dani decided to try and get the Guv early release on compassionate grounds and asked Morag for help. Morag was shocked when Dani told her the Guv’s real name was Viv Standish, as was Alf when she told him: Viv had been his first girlfriend. Alf explained to Dani that Viv’s family used to come to Summer Bay every summer for their holidays. Since he was Protestant and she was Catholic, their families disapproved, but they got engaged when they were eighteen…only for her to never come back. He didn’t hear from her again until fifteen years previous when he read she had been jailed for embezzlement. (Colleen remembered that Viv was also a former Miss Groper…but claimed competition was thin on the ground that year.)

Dani visited Viv and told her about Alf and that he wanted to see her again. Viv refused to let Dani include anything about her and Alf in the book, saying it was about her life in prison, but agreed to be transferred to hospital in Summer Bay so she could see him. Morag arranged it and Alf and Viv had an emotional reunion, although Viv put off telling him the reason she never returned to the Bay. When Dani noticed a locket Viv was wearing, she explained she became hard when she went to prison to stop anyone taking it from her and that only Alf should see what was inside: a lock of hair.

Morag arranged day release for Viv and when Dani presented her with the completed manuscript she asked for one last favour, writing up some extra notes she gave her. Alf took her for a trip on his boat and then to the pool where he had proposed to her. There Viv gave him a short story Dani had written based on the extra notes. Viv had become pregnant and had Alf’s son. Afraid of what their families would say, she had had the boy adopted locally, keeping only a lock of hair. (The information ultimately led to Alf finding out that Ric Dalby was their grandson.) Alf forgave her for keeping it from him and, having finally made peace with her decision, she died in his arms not long after.