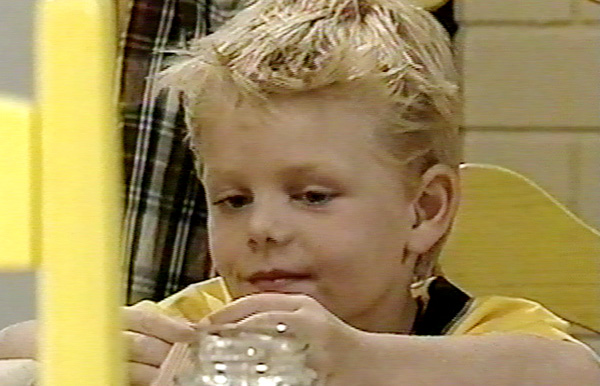 Riley and his older brother Braydon were the two children of Kelli, a single mother that Alex Poulos became involved with. Kelli brought the boys to the park to spend time with Alex and VJ, who she believed was Alex’s son. Even when she found out the truth, the families continued to see a lot of each other, with Leah taking VJ to play with Riley and Braydon, until Alex and Kelli broke up.

A few months later, Kelli’s estranged husband Jason abruptly moved himself back into the family home. When they realised he was being abusive, Alex and Charlotte convinced Kelli to take the boys and go and stay with Leah. Kelli was afraid that Jason would still be part of their lives however, and was scared when Riley and Braydon went missing while she was with Alex and turned up with a lollipop each, having apparently been with Jason. She was forced to back down when Jason insisted on spending time with his sons but not long after Jason was arrested for robbing the Drop-In Centre, leaving the family free of him for good.