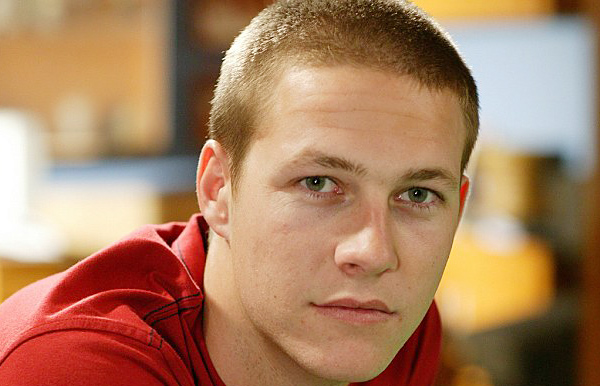 His first appearance on screen was to make an excellent suggestion for the Dan Baker Tribute and we were left thinking that the new boy might actually be a good one. His subsequent pursuit of Nicole, despite her being with Geoff left viewers starting to turn against him but it was when he turned his attentions towards Kirsty that viewers really started to turn against him. Enlisting her as an English Tutor, he made his feelings for her plain but when she rejected him he got his father involved to bully her into resuming tutoring him.

When his father overheard him bragging to his mates about having a sexual relationship with Kirsty, he was too cowardly to put things right. Kirsty’s attempts to persuade him to do the right thing did no good but she was the alibi he gave the police for where he was at Roman’s accident. Unfortunately Kirsty was too scared to admit the truth, causing an angry Trey to lash out and Miles to hit him in defense of Kirsty. With a dislocated shoulder and a father hell bent on revenge things spiraled out of control for Trey.

Jai found a picture of Trey from his old school and in a conversation with Miles he revealed that he was bullied at his last school for being fat and that his father was a hard man to talk to. Convinced by Miles to do the right thing, Trey remained a pariah with the town but found a kindred spirit in fellow outcast Nicole. After realising that they had a lot in common, Nicole invited him round but her father Roman kicked Trey out. Nicole decided she didn’t care what Roman thought and kissed Trey but they agreed to take things slowly. He angered Xavier by repeating what his father had said about Hugo being a liar but later apologised.

They were interrupted kissing by Ruby and after she made a joke about his body a furious Trey ran out on Nicole. For several days he refused to speak to her and went out of his way to either avoid or upset her. Eventually he realised he was angry with the wrong person and explained to Nicole about his body insecurities. She told him she thought he was hot and they got together.

When Nicole started having trouble with Gardy’s presence in the house, she turned to Trey, who helped give her the strength to tell Roman what was going on. Feeling lonely, Nicole told Trey she wanted to sleep with him and they went back to his place but were interrupted by a masked Gardy, who invaded the house to try and enlist Trey’s mum’s help in robbing the bank where she worked. Roman arrived to rescue the trio but didn’t let them know who was responsible. Still feeling abandoned, Nicole slept with Trey just before Charlie arrived to tell them about Roman’s involvement with Gardy. Trey went with Nicole to the police station but she told him to go home.

When Roman was arrested and Nicole ended up living with Miles, neither Kirsty nor Jai wanted Trey into the house but Nicole was becoming increasingly dependent on his support, sneaking him into her room. When he helped her record some footage for Jai’s entry in the town film festival, he failed to tell her the camera was still on while they were having sex. He tried to delete the footage but Jai ended up seeing it and agreed to give him the recording to get rid of. Ruby told Nicole about the footage and when Trey admitted he had considered using it to prove they’d slept together she slapped him and then turned to Geoff for comfort. Feeling humiliated, Trey arranged for the footage to be shown at the festival.

With Nicole refusing to see him and Kirsty threatening to press charges, Trey’s father suggested he apologise to her in front of the whole school. However, the event turned into another humiliation that left neither Nicole nor Trey happy as his father labelled him pathetic and Jai and most of the other students threw rubbers at him. He began compiling a list of everyone who had upset him. Several students, notably Ruby and Annie, wanted him banned from the memorial trek but Nicole felt sorry for him and said she was all right with him coming along.

When he found out what Nicole had done, Trey misinterpreted her intentions and tried to kiss her only to be rewarded with another slap in front of everyone and another telling off from Kirsty and his father. The final humiliation pushed him over the edge and he set up a landmine underneath the bus containing his father, Kirsty and the other students, set to go off if they stepped off the bus or after a certain time. Unaware everyone had survived the explosion, he begged his mother not to turn him over to the police and she smuggled him out of town to the city.

After a short time on the run, Trey realised he wanted everything to be over and went to see his father in hospital with a hyperdermic. Fortunately, Kirsty was there and finally realised just how broken Trey was, telling him that not everything that had happened was his fault and holding him as he broke down in tears. He was taken into protective custody and institutionalised.