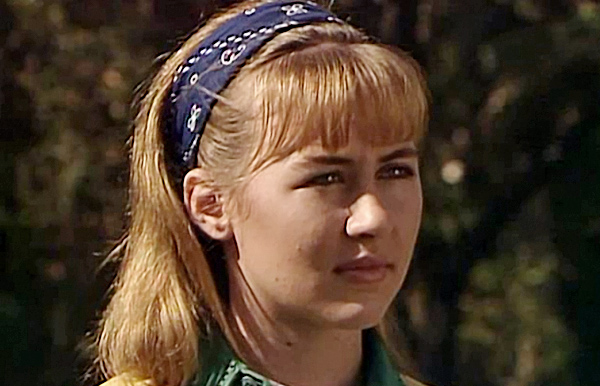 Viv was a runaway who was befriended by Steven and Dodge in the city. They bought her back to Summer Bay and hid her away in a shed to save her having to go home to her abusive father. When caught by Tom, they lied that Viv was Lance’s cousin but a scared Viv ran away and was rescued and bought back by Bobby and Steven. When Viv refused to talk to Tom and Pippa, Lance explained the situation to his Mum Colleen who agreed to lie for Viv and signed the enrollment form for school, stating herself as Viv’s guardian.

Viv’s father turned up at school and charmed everyone. Viv and Steven explained what he was really like to Andrew Foley but her father got round her by using her sister Tammy, to guilt her into coming home. Back at home, Viv was punished and locked under the stairs but Tammy let her out and she called Steven for help. He and Bobby came to rescue her and Reverend Newton reluctantly allowed Viv to leave but she and Bobby snuck back in to rescue Tammy and locked Reverend Newton under the stairs.

Bobby took Viv and Tammy to Mr Fisher’s house where they met Howard West, the department representative and he explained that Viv and Tammy could either go to a children’s home (with a chance of being separated) or stay with their father, with supervised visits from the department. Tammy chose to go back to her father but Mr Fisher offered to keep Viv. Viv settled in the bay and tried to get a job but her first attempt as a cleaner saw her mistakenly locked in a cupboard with Steven and even a kiss couldn’t erase the memories of her past abuse.

She was bullied at school for being Fisher’s pet and despite trying her best to cause trouble Fisher continued to let her off. Eventually she asked him for a detention and was delighted when he obliged. Matt asked her out but school bully Vicki Baxter threatened her not to go out with him. Carly intervened to set Vicki up and Viv went to the dance with Matt but she really still wane Steven and asked him out again, only for hi to knock her back. When Emma defended her to Matt a new friendship was born but a night out clubbing when they were supposed to be at the teens disco saw Viv roll in drunk at one am with Fisher waiting up for her. He banned her from seeing Emma but Emma refused to stay away.

She copied Emma’s style of dress and helped her cheat to be enrolled at school but they got into trouble when they hitched a lift with two guys who quickly got heavy with them. They were rescued by Steven and Alf and Steven gave Viv a lecture about her actions. They began spending time together again though but Viv became convinced Steven wanted to sleep with her and accused him of it every time they were alone together,causing Steven to back off. Emma let her drive Alf’s car but they crashed it into RevHead’s car and were threatened with paying for the damage. With Bobby’s help they managed to get one over on Revhead and Viv turned her attention back towards Steven. She tried to seduce him and finally succeeded but their romantic swim was interrupted when a shark entered the water and Viv only just warned Steven in time. He bought her a locket and instigated a romantic night alone but Viv accused him once more of trying to sleep with her but the locket won her round.

When Fisher was arrested for murder Viv asked Tom to take her in but The Department had other ideas and tried to take Viv away so she and Steven ran away instead. Hiding out in the bush, Steven was injured falling off a cliff and Viv was trapped and unable to go for help. They were rescued by Fisher, Adam, Tom and Bobby but Viv was still taken away, only to be returned the next day after Fisher was cleared. Thanks to Vicki Baxter’s meddling Steven and Viv both thought the other was seeing someone else and they split up before realising that they’d been tricked and reuniting. After some difficult times in the aftermath of Tom’s death, Viv treated Steven to a picnic but it was ruined by the news that her sister Tammy had run away. Steven and Viv searched for her only to keep missing her but she eventually turned up at Mr Fisher’s. Viv offered to go into care with Tammy, infuriating Steven so they arranged a last night out in the city together. They were late returning and almost missed the welfare department’s visit but arrived just in time. The welfare lady introduced Viv’s mother and after a heart to heart Viv and Tammy forgave her and agreed to live with her in Queensland.