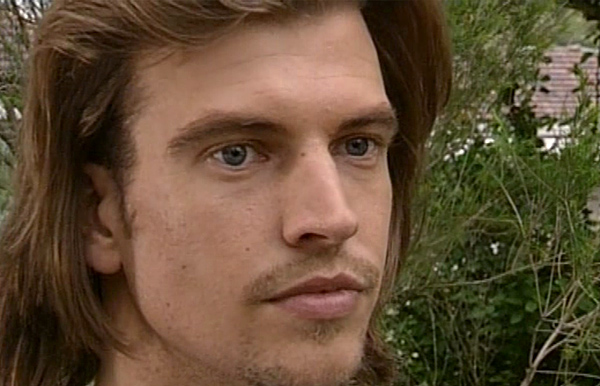 Although he wasn’t seen until 1995, Travis was born and grew up in Summer Bay and Steven remembered going to school with him. He was absent from the Bay at one point prior to his debut since he served a tour of duty in the army. He was first seen talking with Ailsa in the aftermath of the train accident that killed Laura Bonnetti. He formed a bond with Laura’s boyfriend Curtis afterwards and helped him get over his drink problems.

Travis renewed his acquaintance with old school friends Rob Storey and Donna Bishop and gave Donna a place to stay after her boyfriend Andrew beat her. Soon after, he and Donna started dating.When Donna’s brother Gus came to stay and caused trouble for most of the town, Donna persuaded Travis to go travelling with her and he ended up renting the house out to Steven and Kelly. However, he returned not long after explaining that he and Donna had split up and moved back in with them. Steven had no objections to his presence but Kelly was less keen on the idea.

Travis ended up in the thick of it when Dodge returned to town intent on getting revenge on Steven. He accidentally destroyed evidence that Dodge had faked his own death and he and Shane arrived on the scene just too late to stop Steven and Dodge falling off a cliff in a fight. He did, however, manage to rescue Kelly, who Dodge had kidnapped and left tied up. The incident caused the sexual tension between them to come to a head and they embarked on a relationship.

Things didn’t stay quiet for long as when a group of thugs started threatening Shane, they ended up hijacking Travis and his boat. Realising that things weren’t looking good for them, Travis and Shane decided their best bet was to jump off the boat into the water, where they were fortunately rescued. The incident caused Travis a few problems some months later after he’d bought an expensive plant.When a policeman turned up looking for Travis to give evidence, Curtis and Jack assumed he was after the plant and it was illegal and so burnt it to get rid of the evidence.

Travis picked up his first stalker in the shape of Debbie Salter, who he met when he caught her son pinching vegetables. She tried to kill Kelly by planting a funnel web spider in her bed and Travis ended up taking out a restraining order against her. He received another blast from the past in the shape of Stephanie Mboto. While stationed in Africa, Travis had had a relationship with Stephanie’s sister Kibiri but had been unable to prevent her being shot and killed.Stephanie had also been wounded in the incident and Travis and his commanding officer had arranged to have her smuggled out of the country. Stephanie ended up moving in with Travis and Kelly, giving him his first taste of parenthood.

Travis decided to propose to Kelly but offended her modern sensibilities when he asked her father for permission instead of her. He eventually asked her directly and she accepted. Soon after, she was offered a job in the city and Travis agreed to go with her. Shortly beforehand, his old mentor Pat O’Connell was lost at sea during a storm and even though Alf called off the search, Travis and Curtis went out anyway and managed to rescue Pat and his sons. Travis confessed the incident left him feeling useful for the first time in ages and Kelly realised he wouldn’t be happy in the city. She left without him, leaving only a farewell note, and he quickly accepted her decision.

Travis’ house quickly became a bachelor pad when he invited Jesse McGregor and Lachlan Fraser to move in with him. However, he wasn’t single for long as he fell in love with Rebecca Fisher. The pair ended up getting their own flat and moving in together and after hearing a story about a couple who got married without telling their friends they were going to do it, they decided to do the same. In the 1997 finale, Travis and Rebecca invited most of the Bay to join them on the beach, telling only Don and Marilyn what was happening, and had a simple wedding surrounded by those closest to them.

They didn’t have much time to enjoy their marital bliss though as Pippa had decided to go away and asked the couple to look after the caravan park and foster children Tiegan, Justine and Sam. Travis’ world was further rocked by the arrival of his older brother Joel, who he hadn’t seen for seventeen years, with wife Natalie and children Tom and Gypsy. Travis had never understood why Joel left but remembered there had been an argument between them and their father that night. Joel eventually admitted that their father had sexually harassed Natalie while he was her swimming coach. It probably wasn’t the best time for Sally’s boyfriend Tim to develop an extreme jealous streak and, when he saw her hugging Travis, spread the rumour that Travis also liked young girls. When he found out where the rumours came from, Travis forced Tim out of town.

Travis and Rebecca had a rocky start to their role as foster parents; the kids weren’t used to having a young and affectionate couple looking after them. Sam in particular had a hard time adjusting and ended up going to live with Don. They had even less luck with crisis care children; one girl, George, on hearing how strong their relationship was took delight in acting up with Travis and playing the victim with Rebecca, starting an argument between them, and when they were asked to look after a baby, Abby, they spent all night trying to get her to stop crying, with all three of them ending up passed out exhausted on the sofa.

Their parenting skills were called into question in a more serious way when they gave Justine permission to have her boyfriend Vinnie stay over. Several parents thought that such a liberal attitude made Rebecca unsuitable to teach their children but fortunately Joel stuck up for them and persuaded a meeting they had the right to choose how to bring up their children. When Pippa’s boyfriend Ian arrived with the news she wasn’t coming back, Travis and Rebecca were initially put out but eventually realised they would miss not having the children around and were glad when Justine asked to stay with them.

Travis inevitably became involved when David DiAngelo, a man Joel had once arrested, started targeting his brother’s family, rescuing Gypsy from a fire at the family’s home and helping find Natalie when she was kidnapped. Afterwards, he invited them all to move into the caravan park with him, Rebecca and Justine (and Tiegan before her departure). He and Joel went on a fishing trip to get over the incident and met two women, Brooke and Mara. Brooke was shocked to see Travis was the spitting image of her late fiancé David and ended up following him back to the Bay, insisting she was in love with him. She soon came to her senses but when she mentioned David’s father was a fisherman named Jack, Travis realised his father had had another family. He tracked down David’s sister Claire and, finding her down on her luck, invited her to stay with them. However, Claire was resentful of the fact that Travis had inherited their father’s house and business while she and David had had nothing and ended up stealing from him. Joel insisted on reporting it but Travis refused to press charges and even let her keep what she’d taken. However, it wasn’t enough to stop her leaving town.

However, Travis and Rebecca were still not entirely happy with the life they’d fallen into and when they had the opportunity to work on a tall ship they jumped at the chance. Their guilt was assuaged slightly when Joel and Natalie agreed to stay on to look after Justine and recent addition Peta and they made a quiet exit from the Bay.

In 2002, Don received news that Travis and Rebecca had had a son but no further details were given.