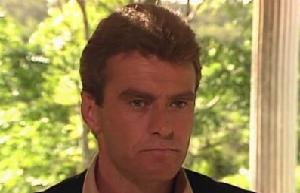 Scott was Floss and Neville’s son from whom they were estranged. From conversations about him we gathered that he worked overseas and rarely saw his son Ben. He was first seen on home and away when he turned up at Floss and Neville’s caravan looking for his son. He was furious to see who was looking after his son and dragged Ben away rather than let him be bought up in a caravan like he was. At home Ben gave his father a hard time and Floss and Neville turned up camping on his lawn and refusing to move until he let them see Ben.

On mothers day Neville attempted to persuade Scott to call Floss or send a card but he refused. Neville was insistant though so Scott returned the next day with his wife Anna and son Ben and they spent the day playing frisbee on the beach.