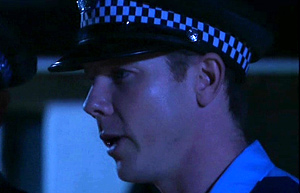 Mike Jones was one of the police officers assigned to Yabbie Creek Police Station.When Sarah Lewis escaped from the pyschiatric institute, he was assigned to keep an eye on Scott and Dani while Peter tried to get all those she might go after to a safe house.He was on guard outside their house with Constable Rice when the couple apparently left for the airport but failed to notice that it was Sarah, not Dani, in the car with Scott, with Dani left tied up inside.

When Rhys arrived at the house to say goodbye, Jones failed to recognise him and insisted on seeing proof of his identity.While they were talking, Dani managed to attract their attention by turning on the stereo inside the house.While Rhys untied her, Jones attempted to contact Peter at Leah’s house, where everyone was hiding, but failed to get a reply.Dani realised Sarah was there and ran off with Rhys.Jones and Rice followed in their patrol car but were delayed at a busy intersection.Since their car was seen arriving on the scene as shots rang out inside the house, Jones was probably present when Noah and Sarah were killed but what action he took, if any, is unclear.