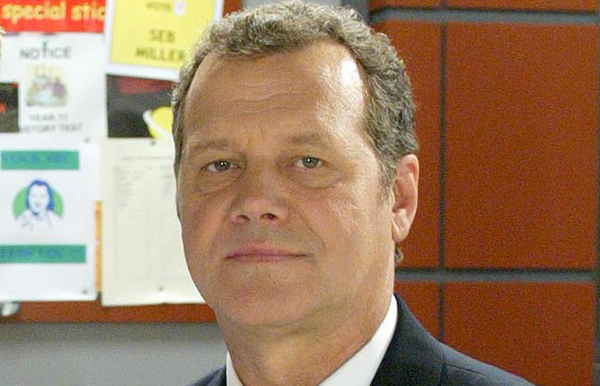 Barry Hyde became Summer Bay High’s new Principal at the beginning of 2004, soon followed by his son Kim, also a student at the school who he didn’t have a good relationship with, to say the least.

Barry soon put his mark on the school bringing in many strict rules and dress codes that saw many students in detention, he was quickly nicknamed Jekyll. One of his bigger early stunts was to make Max and Henry having a boxing match in the hall, after he caught them fighting, despite Beth’s objections. His run-ins with Irene, who was dealing with the aftermath of Hayley’s accident caused Irene to quit her job. The students were also disgruntled and grafittied the school, trash his office and tried to spook him amongst other things.

Possibly Barry’s lowest point came when the students rebelled against him and organised a lock-in, demanding that he changed his attitudes towards them. Whilst in the school during the lock-in Kim found out that he had a child, Charlie, and that his father had been keeping it from him. Kim left the lock-in to attack his father over this. When the school reopened on the Monday Hyde walked into find that only Jade Sutherland and Seb Miller remained. Both ended up excluded in their HSE year.

Barry and Irene had grown closer after the initially frosty first meetings between the two and the pair organised at a date. At the time it went no further.

As a plan to create more disciplined students, Barry organised a student trip to the bush for team building and war games. Whilst out in the woods though he was shot with one of the guns by Duncan Stewart, damaging one of his eyes and he needed to be transferred to the city for surgery, leaving the bay for a couple of months.

When he returned from the city he came with Brooke and Charlie. Whilst Kim thought that his father was doing a good turn for him for once, what Barry was actually trying to do was get Brooke and Charlie out of Kim’s life forever. Sally cottoned on to this and was angry at Hyde for using her, as well as baby Pippa, but a bigger shock was to come. Charlie wasn’t Kim’s son and the loss of a son and a grandson helped bring Kim and Barry closer together.

However, it wasn’t long before they were at each others throats again with Barry not allowing him to perform at the Noah tribute concert as he wasn’t a student of the school. Kim rejoined the school so he could perform, however it ended up that Barry was one of the star performers. After Kirsty’s promised superstar band, Eskimo Joe, deal feel through it was left to Barry and Kit to close the show.

The relationship between Kim and Hyde gradually improved, they went on a camping and Hyde had became less dictorial than he had been at the start of his time in Summer Bay. He even began growing close to Beth Hunter, worrying Kim and Robbie that their parents might be having an affair. There was nothing there, but Barry and Beth played along as to get one over on them.

Barry, also had to deal with the addition to the school of Ric Dalby, a student he only let join because of his swimming skills and the bad relationship he had with the Hunter kids, that often led to trouble at school.

In the new year, Barry and Irene grew closer, Barry being there for Irene when she was distraught when Kirsty and Kane left and they soon started a relationship, including some embarrassment when Hayley and Kim caught them coming downstairs. No sooner were they together, than Irene had to leave for jury duty in the city leaving Barry in charge of the house.