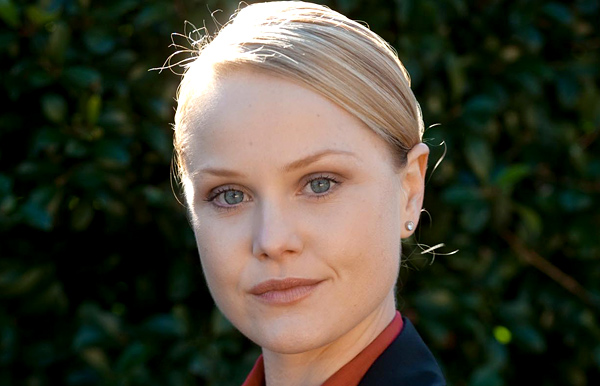 Detective Graves was a trainee who accompanied Robert Robertson when he returned to town to investigate Penn Graham’s disappearance. Robertson explained that she was a child prodigee who had finished school at fifteen and was the youngest ever graduate from the police academy, prompting him to nickname her “Doogie”. She accompanied him to Penn’s hotel room where they met Charlie and looked over the crime scene. During a solo investigation, they found a pair of sequins behind the wardrobe. Graves accompanied Robertson to the Diner where she caught the attention of Dexter and later joined Robertson in interviewing Alf and Nicole. When Charlie filled Robertson in on the fact Alf had had an affair with Penn’s mother Tulip years earlier, Robertson called him in for another interview and instructed Graves to put a mark on a board every time one of them lied. She put several up during Alf’s denials about the affair… and one up for Robertson when he left the room and claimed he was just getting a juice. She also searched through Nicole’s clothes but found nothing that matched the sequins.

Robertson sent Graves to get him a coffee from the Diner while he interviewed Miles but she was waylaid by Dexter, and when Robertson calculated that she had taken too long to return he sent her away. Dexter then came to the station to ask her out and she turned him down, which was witnessed by Robertson, who needled her about it while they kept surveillance on Tulip’s grave and saw Alf laying flowers there. They received confirmation from forensics that someone had died in the hotel room and conducted interviews with Angelo, Will and Nicole; after the latter, Graves admitted that she liked Nicole. She also helped talk to Marilyn.

When Dexter turned up at the station with a bunch of flowers and a dinner invite, Robertson told Graves to agree as long as he made it a double date with Romeo and Indi. During the dinner, Dexter realised he didn’t know her first name and she told him to stick to Graves. She attempted to question Romeo about Nicole but he quickly cottoned on and left, taking Indi with him. Left alone, Graves and Dexter bonded over their shared experience of being the lonely bright kid at school and went for a walk on the wharf together but when Dexter asked her out again Graves admitted the real reason she was there. When Dexter bombarded her with texts, Graves told him to stay away from her but Sid ended up giving her a stern warning about using him and threatening to report her.

With the investigation having hit a dead end, Robertson and Graves prepared to return to the city but things changed when Penn’s body was found washed up on the beach. When Charlie asked Graves how she handled Robertson’s ramblings, she explained that she only listened to every third word. She and Robertson checked over the knife inventory from the bait shop and suspected a mezakano knife was missing. She went to the farm with Charlie to ask Sid about Penn’s mental state and was greeted by Dexter doing an impression of a hunchback servant. Dexter tried to prove he was over Graves by flirting with Charlie but Graves pulled him up short by accusing him of looking for an older woman as a mother substitute.

Graves questioned Robertson’s decision to involve them in the search for VJ and Lily when the pair ran away together but Robertson insisted it gave them an excuse to keep track of Will. They tracked down Gary, the driver who had picked the pair up, but they were no longer with him. However, Graves deduced that they would hide near where they parted company with him and found the pair hiding in a nearby garage. Lily mentioned to them that Will had said he had done a bad thing. The detectives questioned him about it while dropping Lily off but he claimed he had been referring to cheating on Gypsy.

However, they continued to question Will, especially when Graves found a blood-soaked apron in the bait shop, until Will told them he thought Alf killed Penn. In the season finale, Robertson and Graves arrived at John and Gina’s wedding reception to arrest Alf for Penn’s murder. Graves was nowhere to be seen when Robertson continued his investigation the following year, so it can probably be assumed she returned to the city.