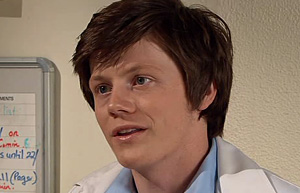 When Amanda began to suspect that Scott was the father of Hayley’s baby, she went to the hospital and met up with Bert. Posing as Hayley, she claimed that the recently deceased Doctor Free was supposed to be giving her the DNA samples from the paternity test so Bert handed them over to her. The following week, he ran into Amanda on the beach, still believing her to be Hayley, and tried asking her out. Anxious not to have her charade discovered, she angrily berated him and hit him with the flowers he’d bought her. Unfortunately for her, the argument was witnessed by Josh West, who then got the whole story from Bert.

Later, pretending to be pregnant, Amanda asked Bert for an ultrasound photo, claiming she had an abusive boyfriend who would leave her if he thought she was pregnant. Bert played along with Amanda for Scott’s benefit, saying she had been given an ultrasound because of a cancellation, but then contacted Josh and told him what she was up to. He later helped out Josh by phoning Scott posing as a doctor and saying there had been a problem with the ultrasound Amanda had supposedly had that morning.

When Flynn realised that Kim couldn’t be the father of Hayley’s baby and that the DNA samples had gone missing, he confronted Bert about it. Bert initially attempted to avoid the issue but on being threatened with dismissal he admitted that Amanda had tricked him.