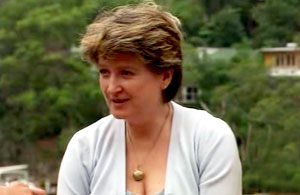 Elaine suffered permanent memory damage following her husband crashing their car whilst he was drunk. Rachel uncovered this when her father came for a visit and soon went with Kim to visit Elaine in a nursing home where it was revealed the Elaine like to paint. A couple of weeks later Kim and Rachel took Elaine out for a picnic along with Robbie and Tasha. However, when Tasha had a nose bleed Elaine walked away and led to a frantic search to find her.

She was eventually found talking to an old lady at a house in the bush, Doris McKinnon who appeard to be quite poorly. After a quick chat Elaine returned to the picnic and then the nursing home.

Elaine then returned for Jack and Martha’s ill fated wedding. Whilst there she received injuries that eventually turned out to be fatal, but not after hope had been regained when she remembered something. Following her death and the helicopter accident Rachel went into a downward spiral.