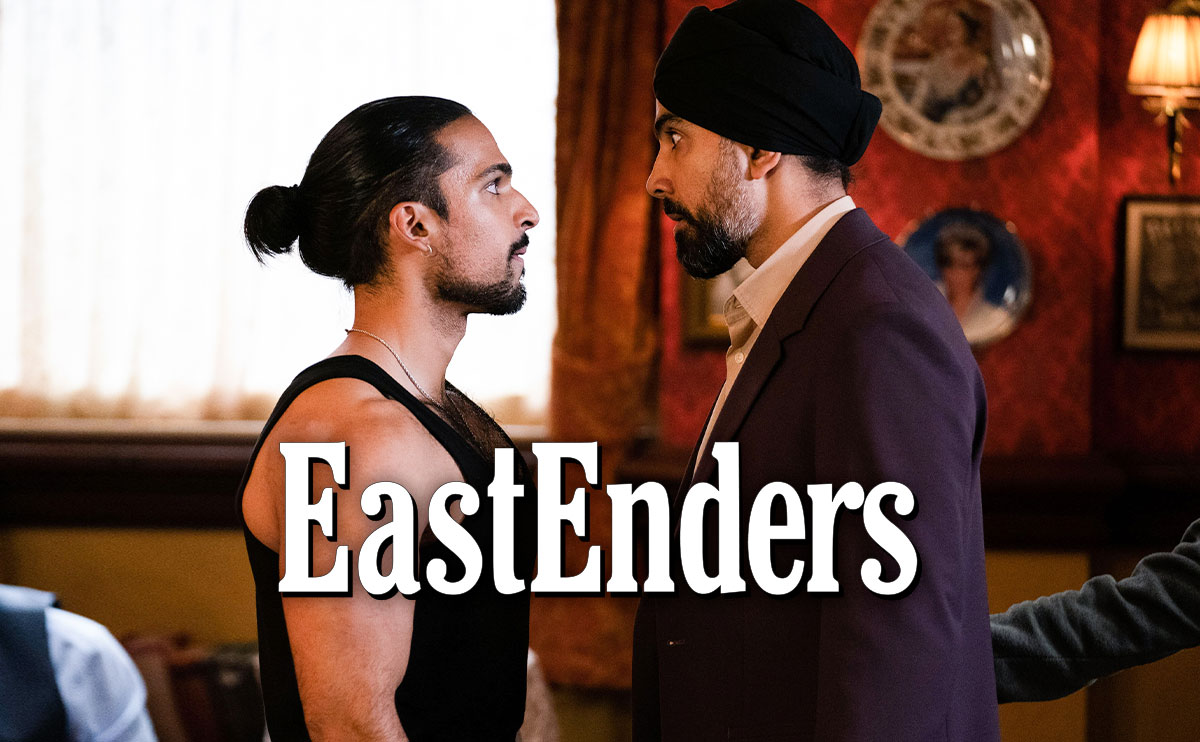 Next week on EastEnders, Kheerat comes close to discovering the truth about what Ravi did, as another revelation leads to a dramatic showdown.

What a few months it’s been for the Panesar family.

It’s only a matter of weeks since Suki (Balvinder Sopal) shared another passionate kiss with Eve Unwin (Heather Peace), leading to the pair getting caught in bed together by Suki’s son Kheerat (Jaz Deol). 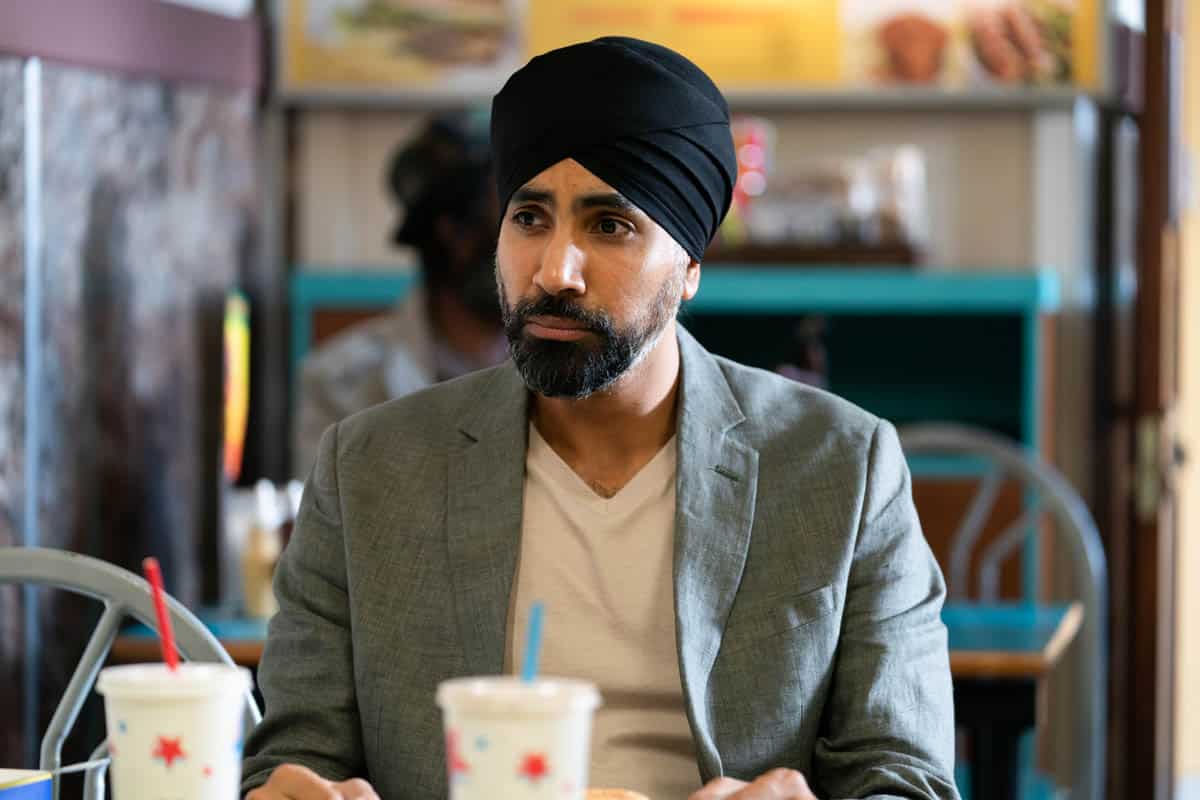 While Kheerat encouraged his mum to be herself, she confessed that she struggled after facing years of emotional abuse at the hands of her estranged husband Nish (Navin Chowdhry). She refused to work on her relationship with Eve, leaving fans worried that ‘Sukeve’ would never become a thing. 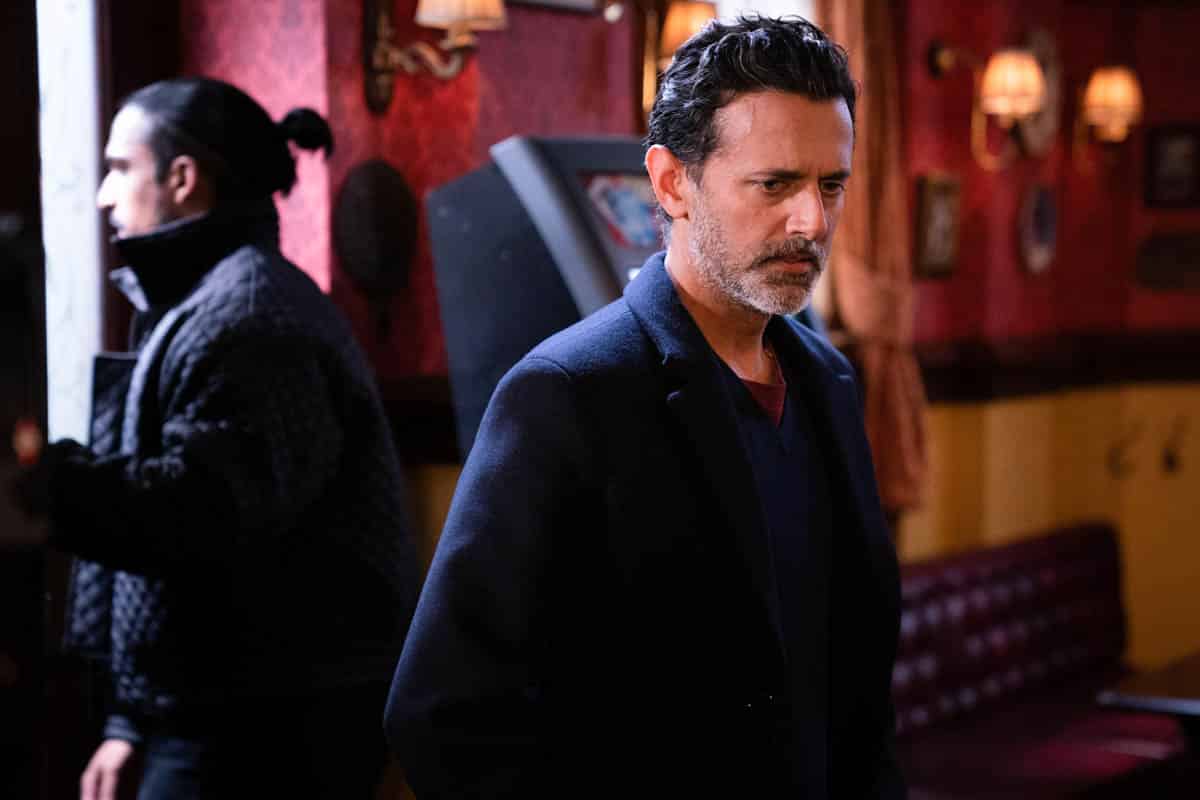 What’s more, with Nish’s 20-year stint in prison complete, he’s back and ready to reconnect with his wife and children. The children believed that Nish had been protecting the family from a break-in when he accidentally killed the robber, so were prepared to welcome him back into their lives, but Suki soon revealed a much darker truth to son Kheerat.

In reality, Nish went to jail for murdering one of Suki’s male friends, who he believed she was having an affair with, so it’s fair to say his estranged wife doesn’t want anything to do with him.

Nish arrived on Albert Square to find Suki gone, having headed to Mumbai for a business trip. Instead, there was an awkward reunion for father and son as Nish and Kheerat got reacquainted, and Kheerat was forced to pretend that he didn’t know the real reason for his dad’s stint in prison. 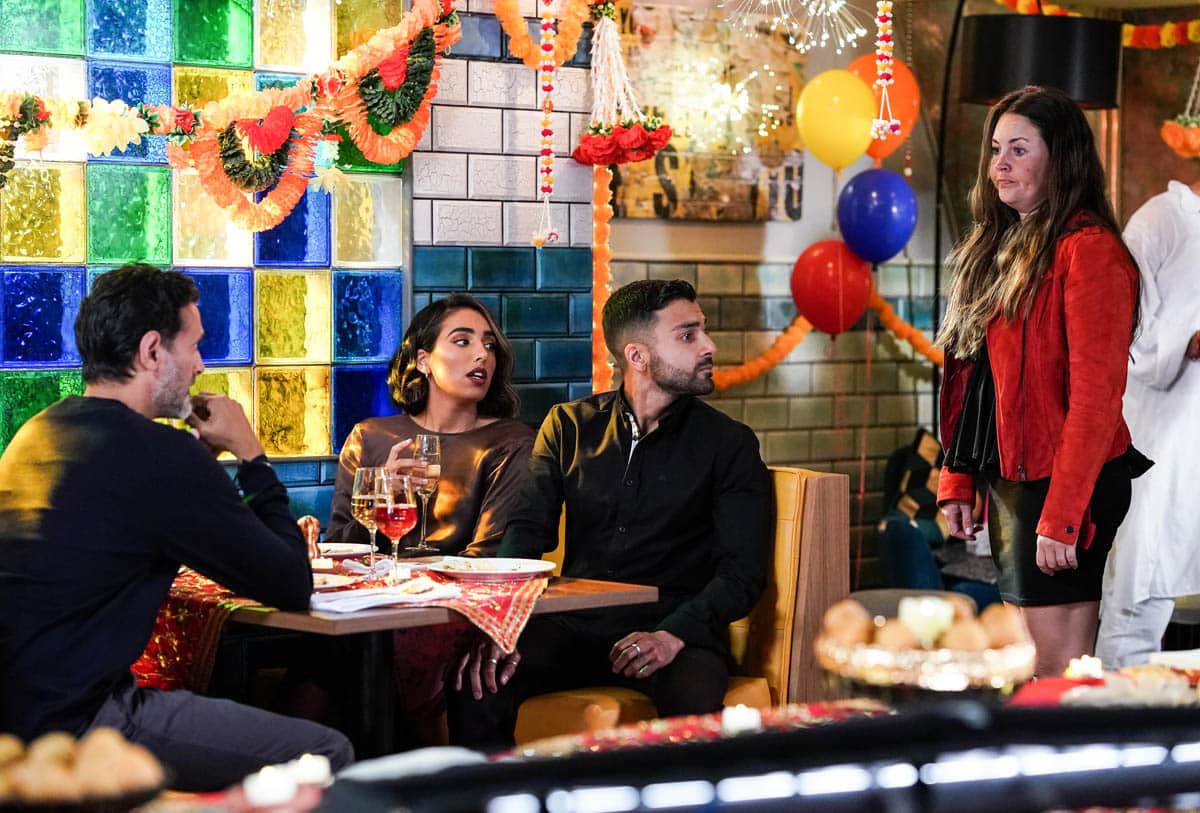 An exhausted Kheerat finally confessed to siblings Vinny (Shiv Jalota) and Ash (Gurlaine Kaur Garcha) the truth about their dad’s time in prison, leading to a very awkward family dynamic.

As if that wasn’t enough, there’s the fact that Suki believes she killed Ranveer Gulati (Anil Goutam) after he tried to sexually assault her. In reality, he was still alive after she hit him over the head with a clock, and it was Ranveer’s adoptive son Ravi (Aaron Thiara) who finished him off shortly after. 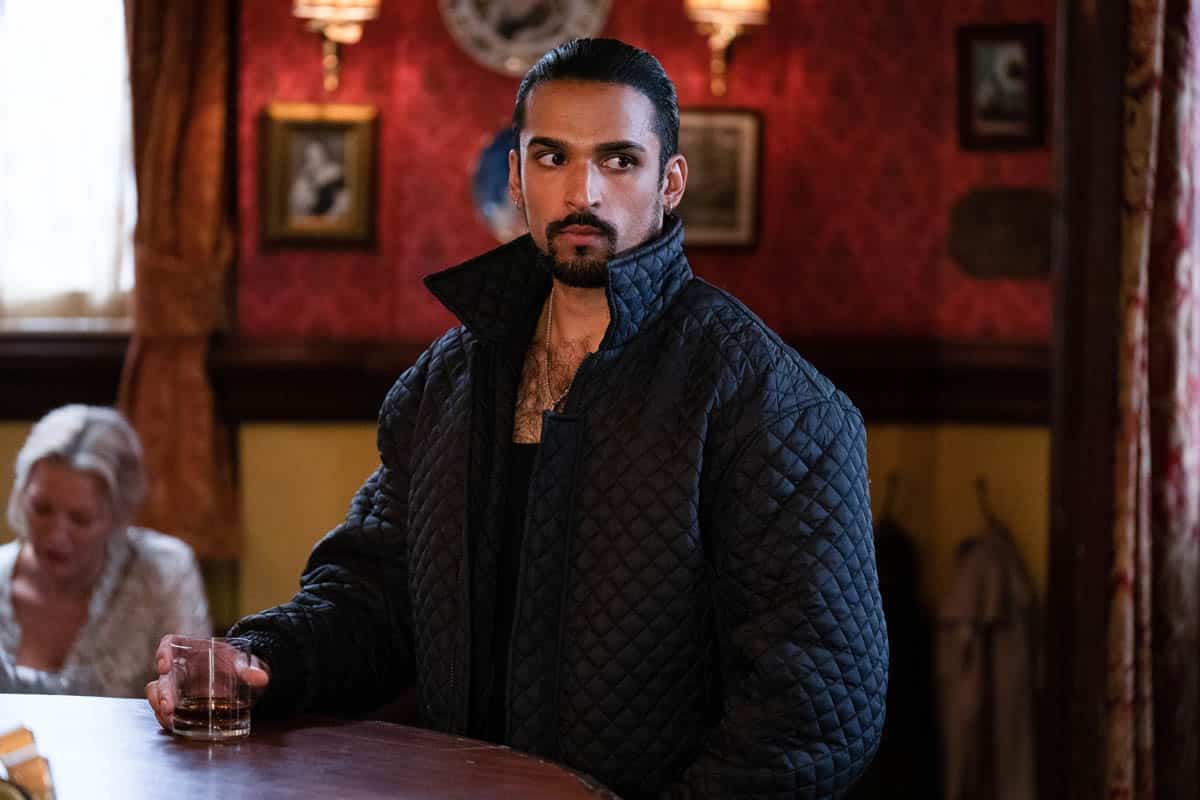 Ravi was already embroiled in a secret plot to steal Ranveer’s cash, alongside Ranveer’s wife Nina (Hersha Verity). After unexpectedly getting caught up in Suki’s drama, Ravi cut up his adopted dad’s body, put it in a suitcase and disposed of it in a nearby river.

Now, Ranveer is missing (obviously!) and Kheerat is growing increasingly suspicious of his uncle’s sudden disappearance. This week, he comes one step closer to discovering the truth as he learns that Ranveer tried to assault Suki, and the discovery of another explosive secret leads to a showdown in the Queen Vic. 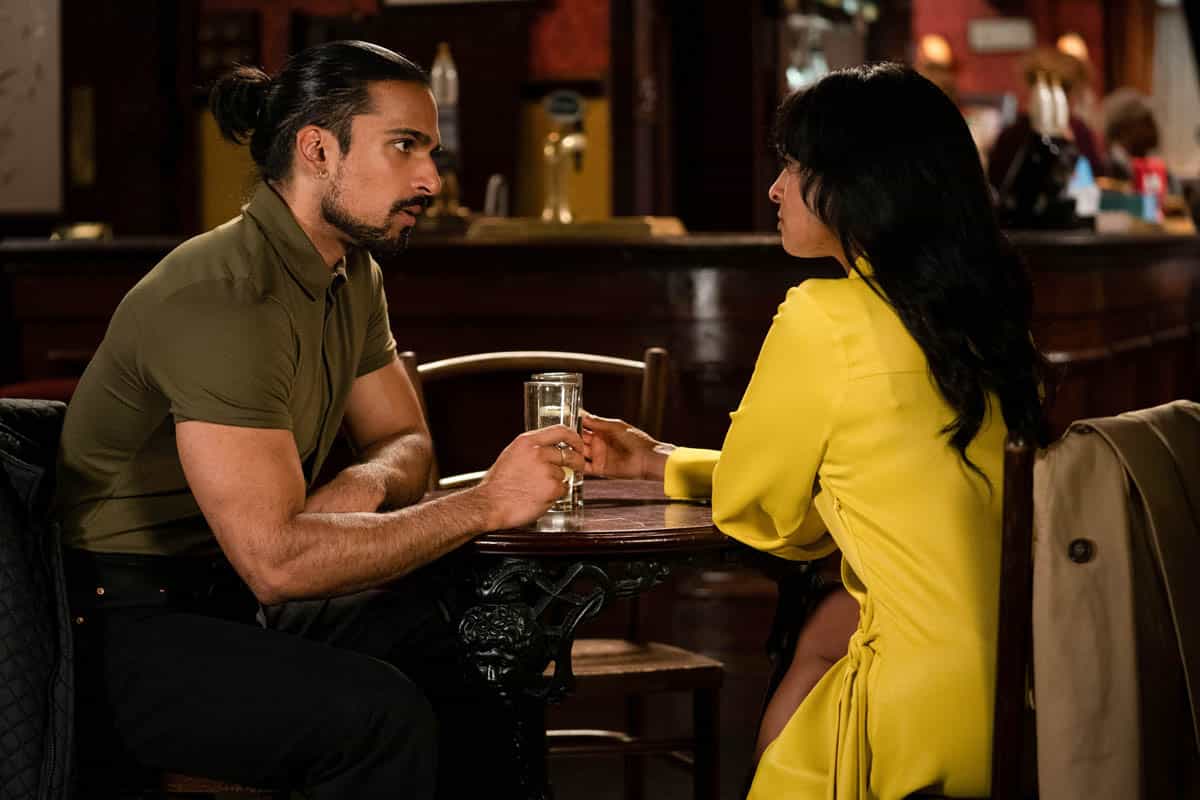 This week, Nina shocks Ravi when she goes to the police station to report Ranveer missing. He can’t believe it – why is his secret lover drawing attention to Ranveer’s disappearance? However, Nina knows what she’s doing – the only way they’ll ever get Ranveer’s cash is if they report him missing.

It all becomes complicated when the police come up to Ravi in Walford East, wanting to know what he knows about his father’s disappearance. With the police snooping around, how long will the secret stay a secret? 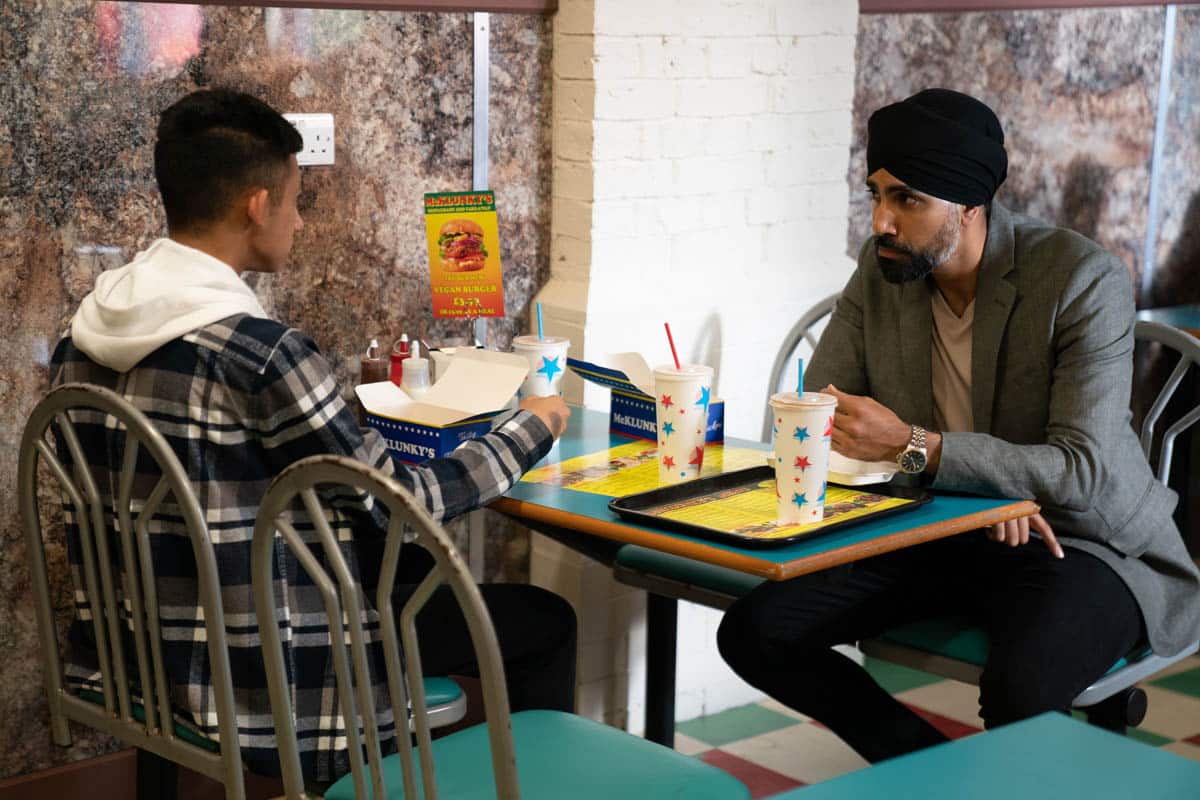 The latest development makes Kheerat even more suspicious about his uncle’s whereabouts, especially as Ravi doesn’t seem at all bothered about where he is.

Wanting to get more information, he sets up Lily Slater (Lillia Turner) to take Ravi’s son Nugget (Juhaim Rasul Choudhury) out for a milkshake, hoping to get the family gossip out of Nugget. 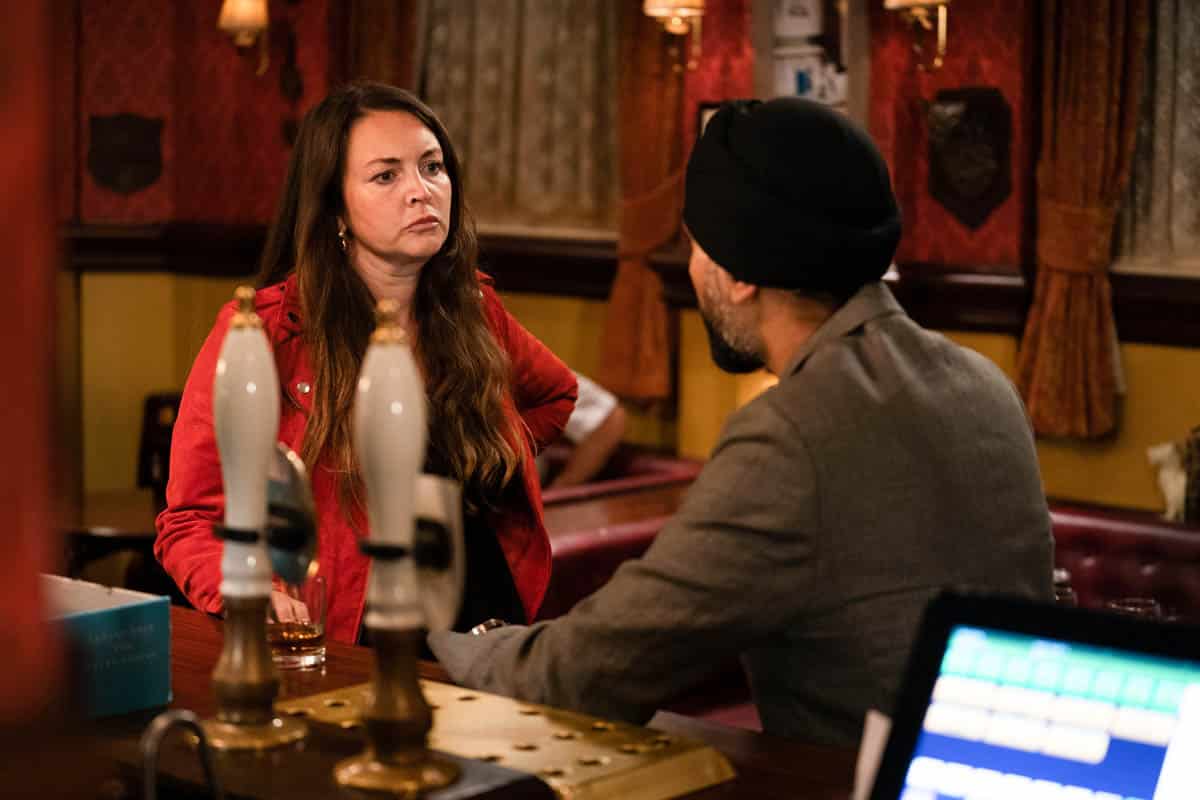 Of course, this just gets Lily’s hopes up that she could be in with a chance with Nugget, and it’s fair to say Stacey (Lacey Turner) isn’t too happy when she finds out what Kheerat has done. She throws a drink at him for lying to her daughter, and it’s clear that it’ll take a lot for these two to make up.

At the Divali celebrations, Kheerat announces to the rest of the family that Ranveer is missing. He later confronts Ravi, airing his suspicions as he tells him he knows that something is going on. 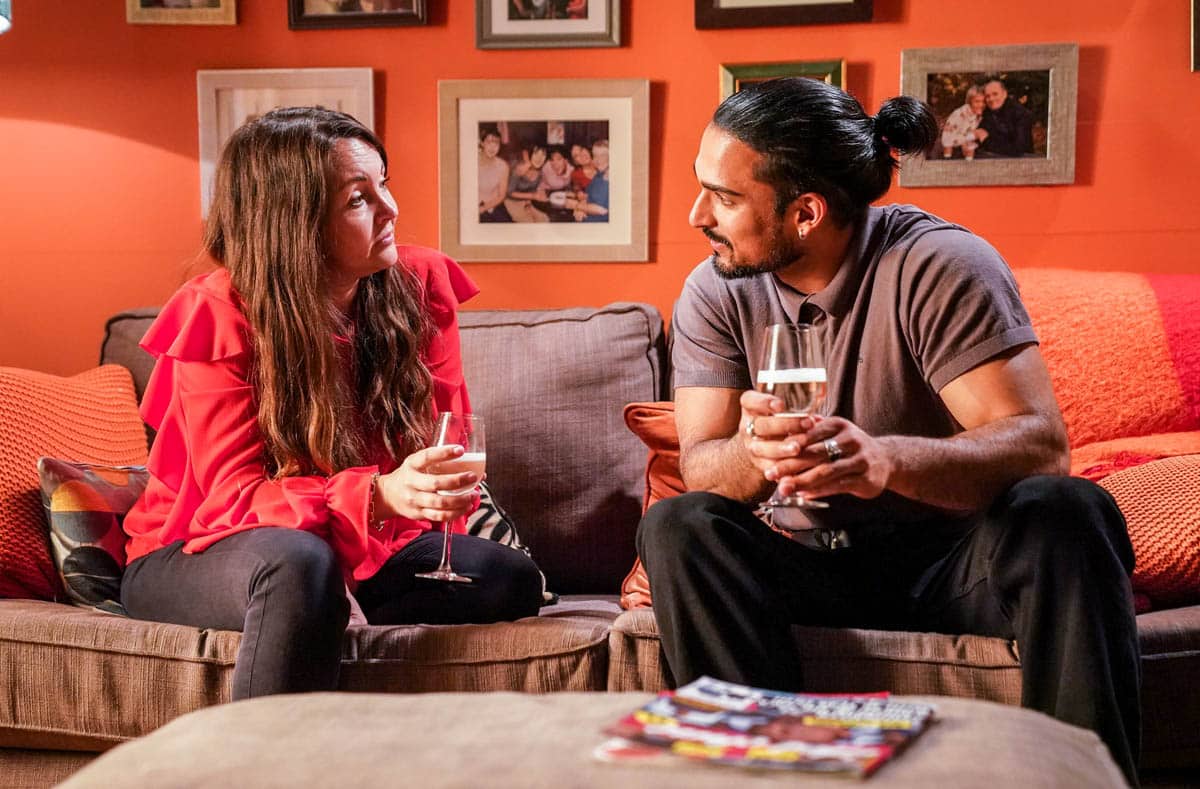 Kheerat may be suspicious of Ravi, but Ravi has no intentions of hiding away. He arranges to meet up with Stacey to “talk business,” but the flirty businessman can’t stop himself from making another move on her.

The pair open up to each other over a bottle of wine, and it’s not long before he leans in for a kiss! 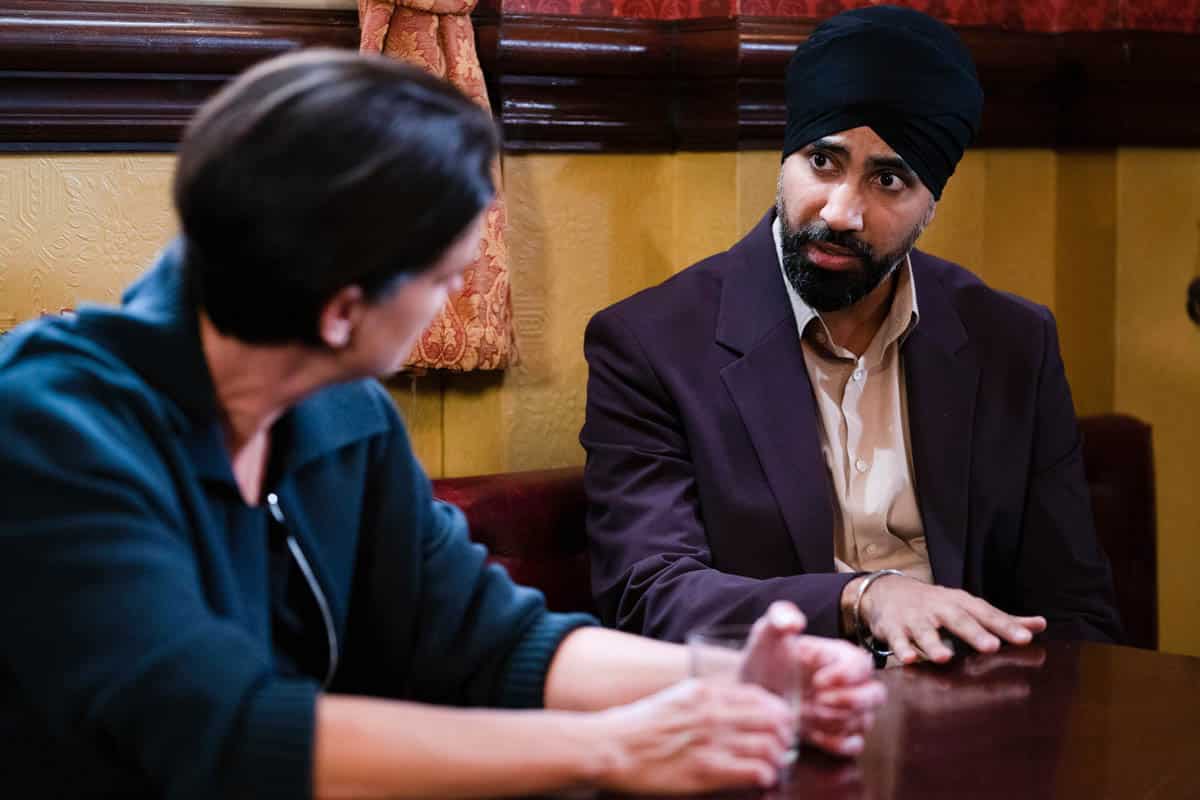 Eve, meanwhile, is still upset about how things ended between her and Suki. She eventually decides that Kheerat should know the whole truth, and opens up to him about what Ranveer tried to do to his mum.

He’s obviously disgusted and shocked – but suddenly the timing of Ranveer’s disappearance starts to make a bit more sense. Did his mum have something to do with it? Or will he figure out the part that Ravi played? 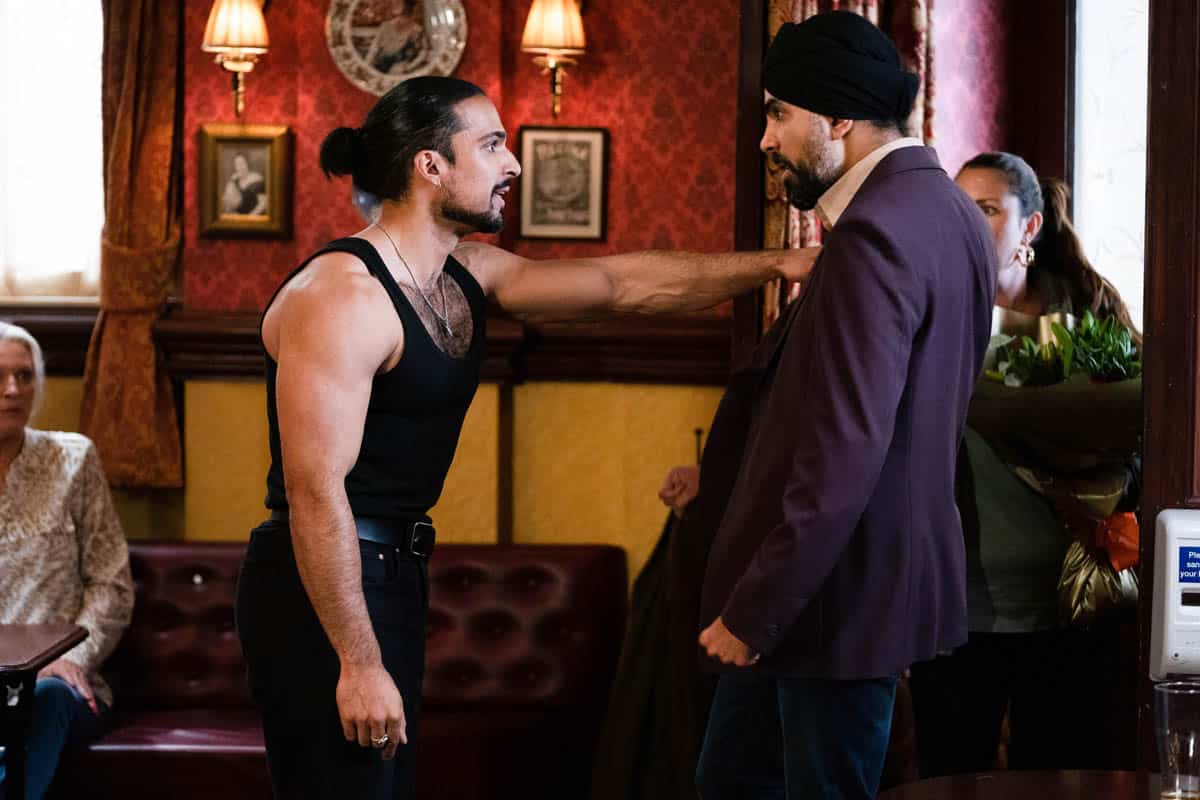 As if one revelation wasn’t enough, a slip of the tongue by Stacey ends with Kheerat discovering that Ravi tried to kiss her. He marches over to the Queen Vic ready to have it out with Ravi, and the two start a brawl which spills out onto the Square. 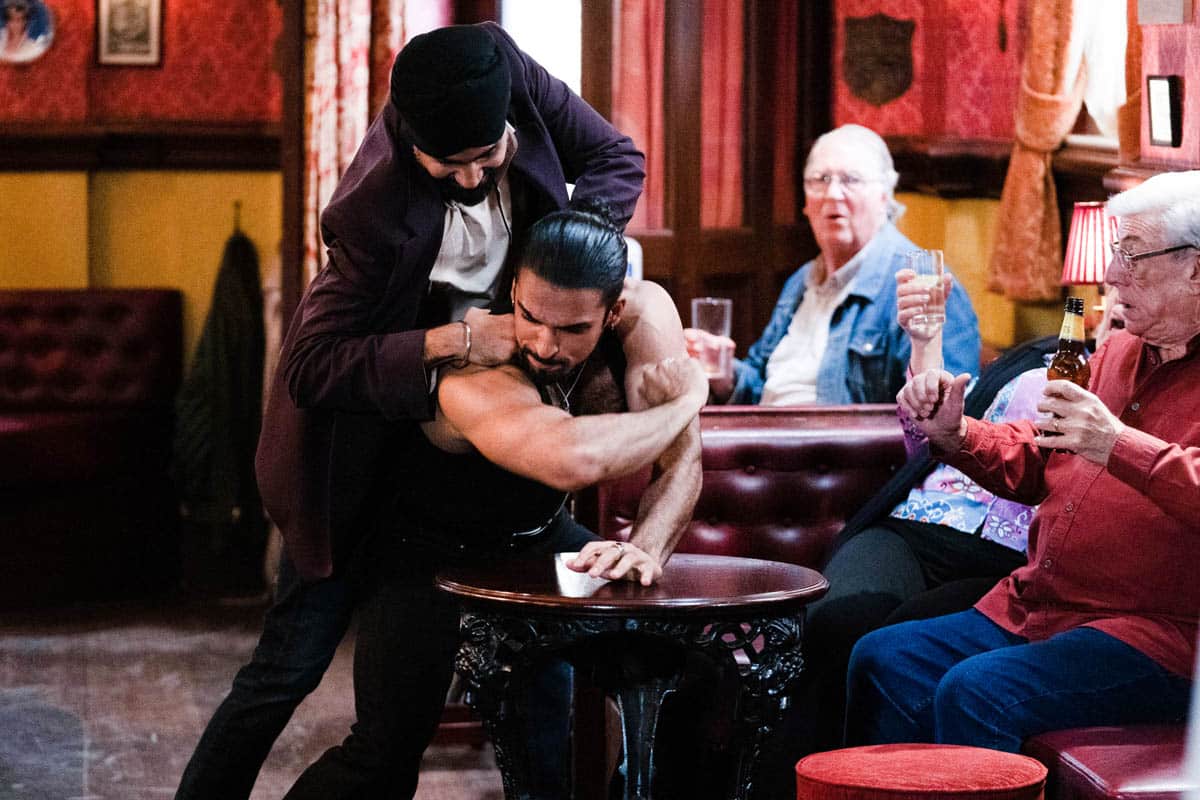 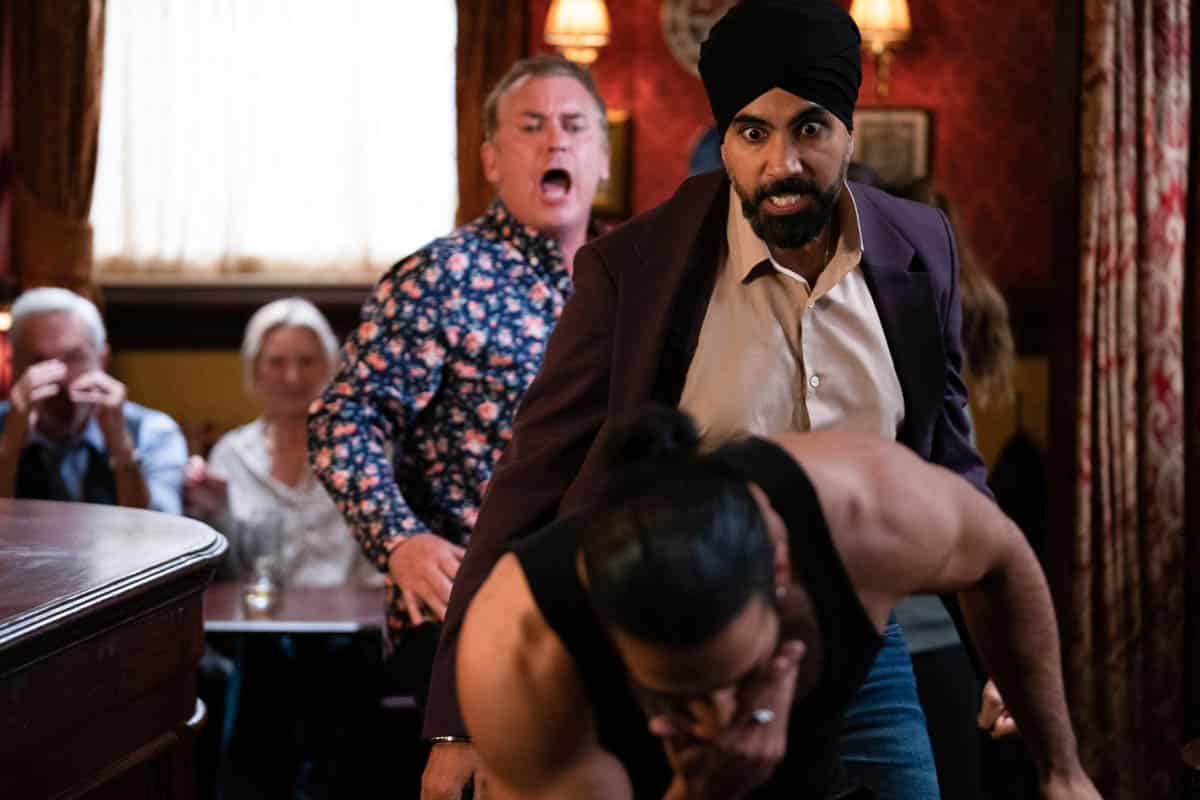 With secrets being revealed left, right and centre, and Suki on her way back to Albert Square, how long until the truth behind Kheerat’s murder comes out once and for all?

Here’s the full spoilers for next week’s EastEnders episodes:

Felix helps Lola and Lexi out after a ripped dress threatens the pageant.

Kheerat learns that Nina has reported Ranveer missing, and decides to use Nugget to get more info.

Lola collapses with a seizure just before Lola’s pageant kicks off.

Felix and Finley ready themselves to move in with Chelsea and Whitney.

Lola gets a worrying diagnosis after her sudden seizure.

Whitney is surprised to learn she’s got two new housemates. Can they all get along?

Stacey is angry that Kheerat used her daughter Lily to get close to Nugget.

Harvey overhears Dotty Cotton talking about him… and it’s nothing complimentary!

Stacey opens up to Eve about her tense relationship with Kheerat, leading to a huge row.

Ravi makes a move on Stacey.

Felix organises a lavish dinner to thank his new housemates.

Kheerat’s attempts to apologise to Stacey and Eve lead to him discovering a huge secret.

A fight breaks out between Kheerat and Ravi.

Harvey goes to the police over Dotty.