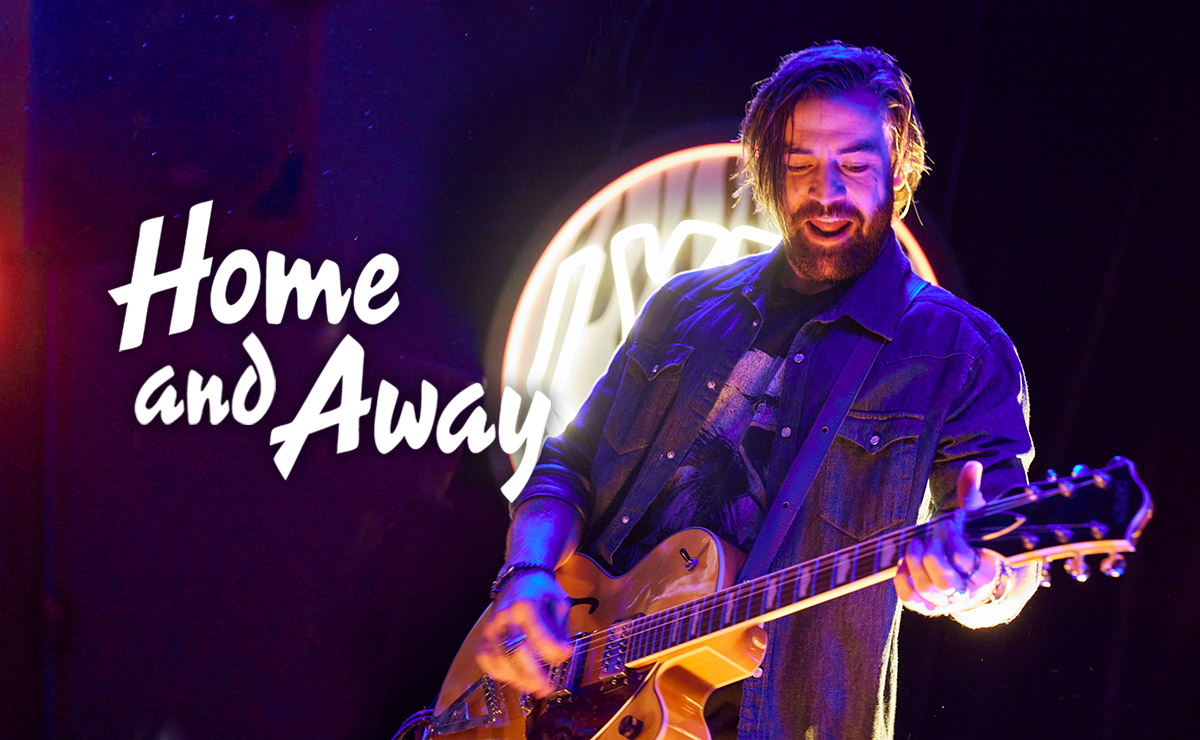 Coming up this week on Home and Away in Australia, Kirby and Theo’s plan to get Lyrik some much-needed publicity backfires, as Remi threatens to quit the band. 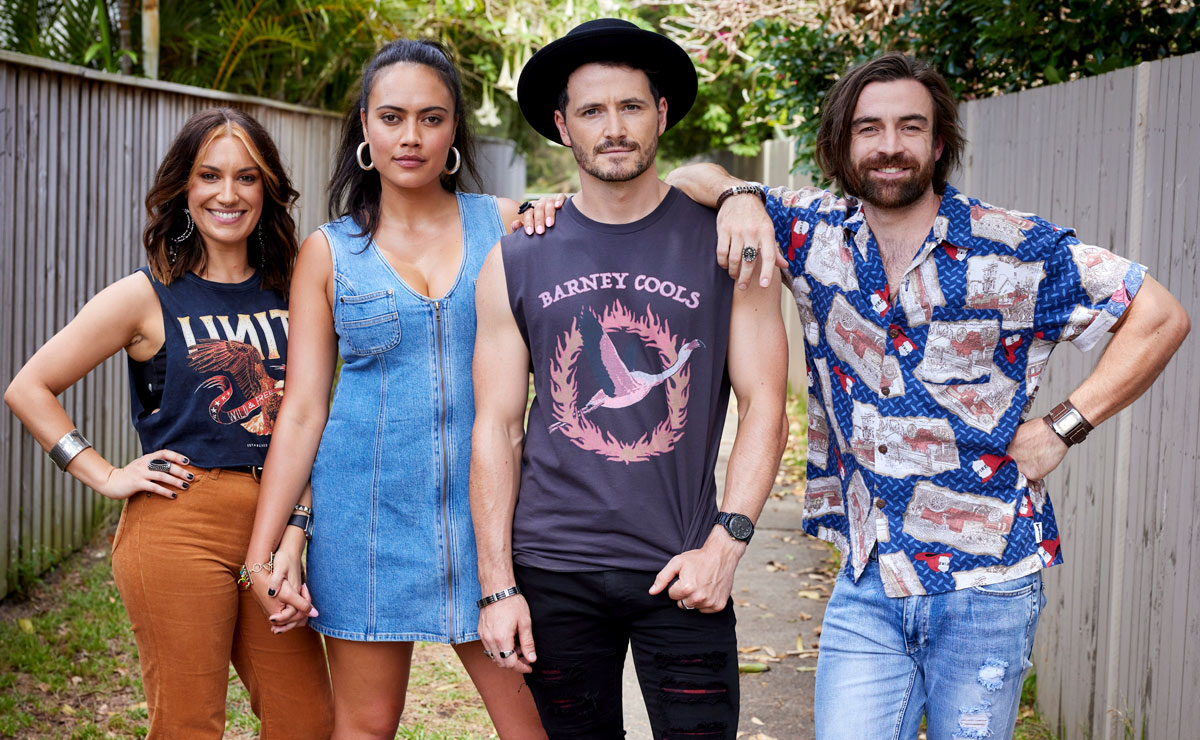 Lyrik have been struggling to market themselves in the wake of Bob’s (Rob Mallett) departure.

While they all agree that they’re better off without their former lead singer, Bob’s ex-girlfriend Kirby (Angelina Thomson) does have to give him one compliment – he was good at marketing. Now it’s on the remaining band members and new member Theo (Matt Evans) to secure gigs, build their following and keep the money rolling in. 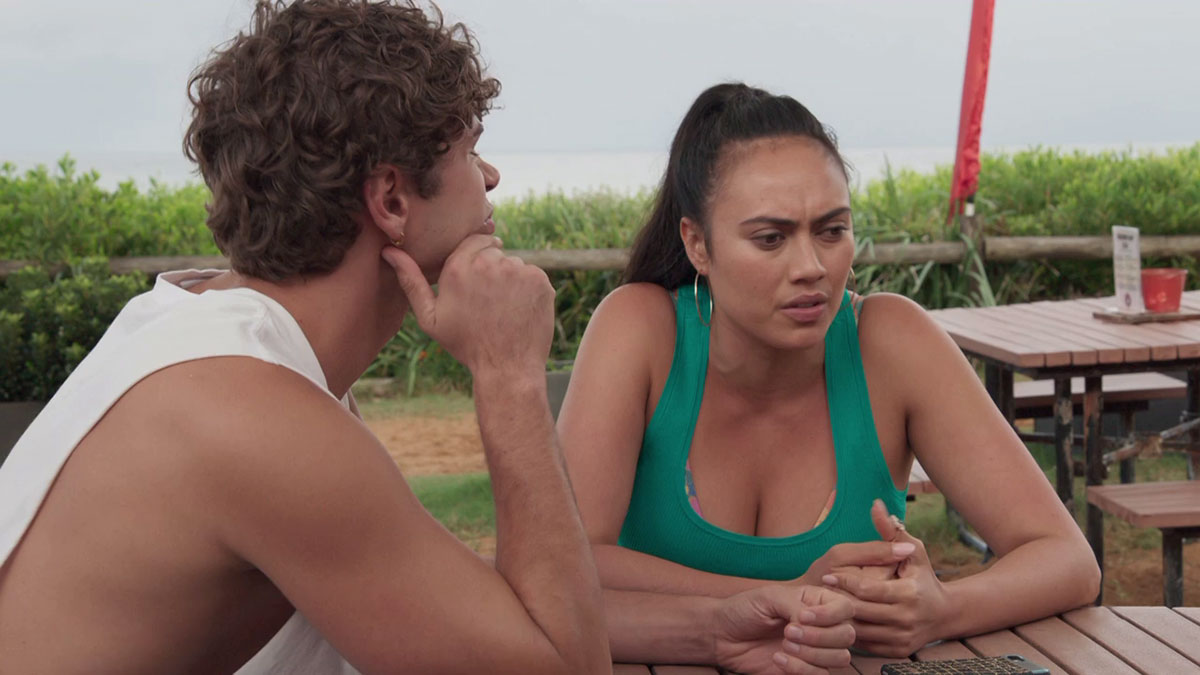 Last week, Theo and Kirby’s ideas – calling a local radio station asking them to play their song; getting a gig review in the the local paper – weren’t big enough or weren’t going to get them the right type of audience, with Kirby pointing out that a feature in the Coastal News would only work “if we want our next gig to be full of pensioners.”

It’s nothing compared to the kind of big, attention-grabbing and often controversial stuff Bob used to come up with. 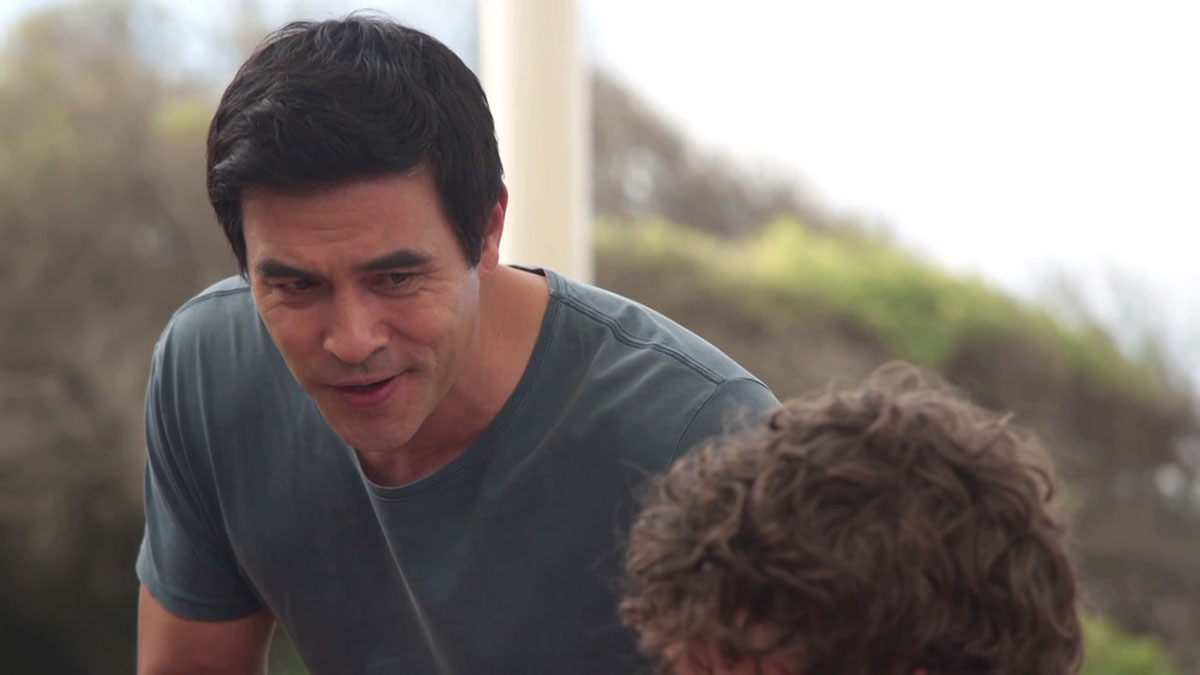 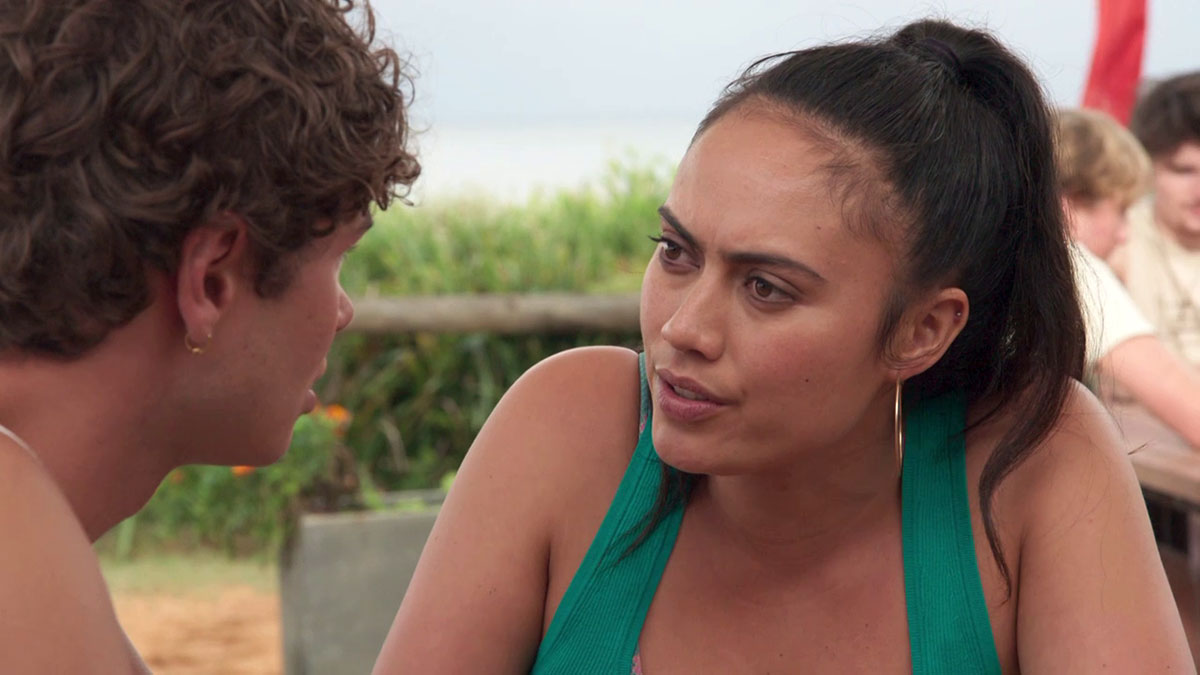 Theo is quick to point out that he used to have a huge online following, but that he deleted his account long ago. However, Kirby pointed out that he could simply reactivate it, and within a few clicks Theo’s tens of thousands of followers were back and ready to be marketed to! 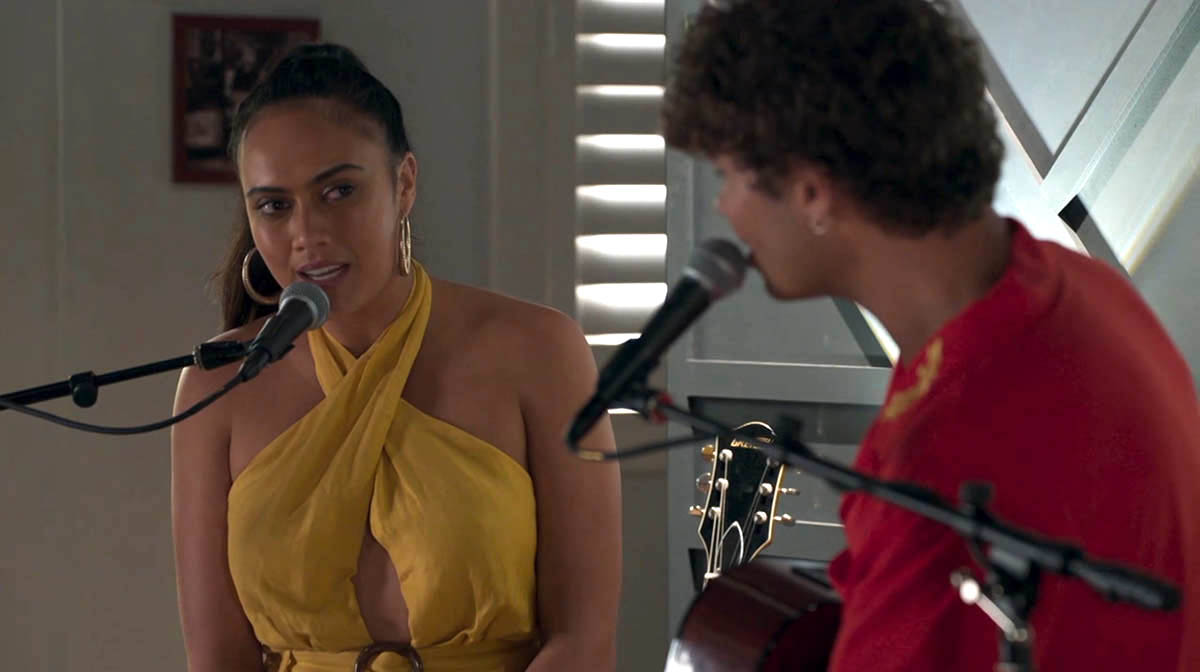 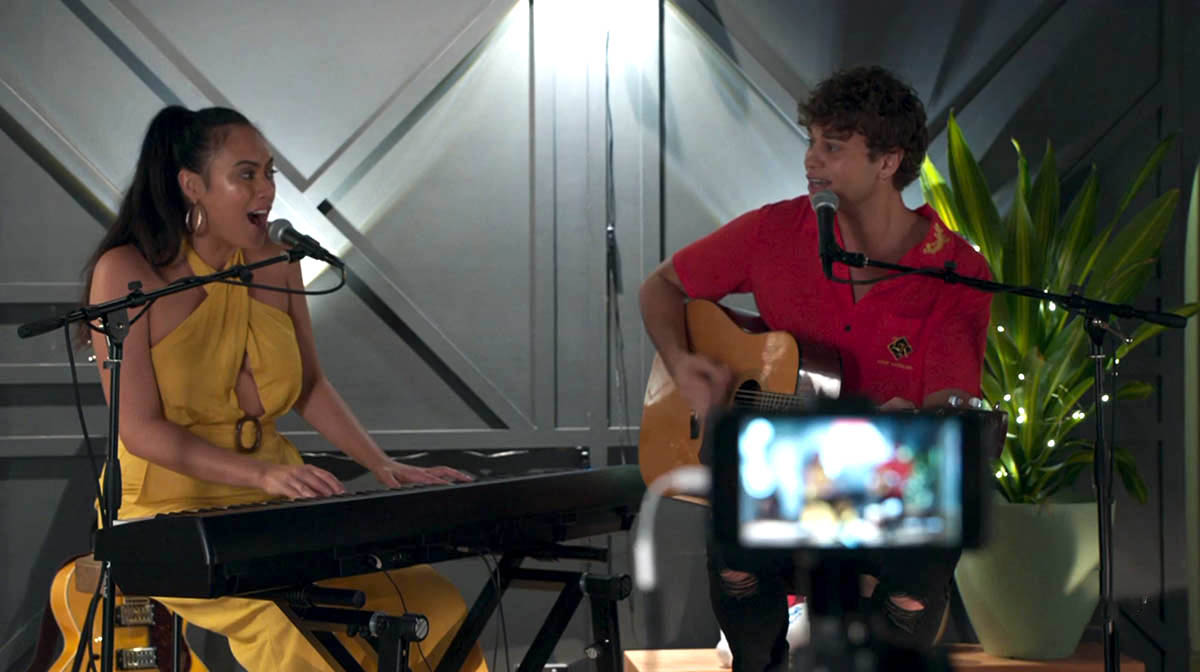 Not wanting to waste a moment, the couple, whose relationship is now out in the open, quickly recorded themselves singing their brand new track, the one which caused them to share a kiss in the first place.

The fact that they didn’t have Remi (Adam Rowland) and Eden (Stephanie Panozzo) with them didn’t matter to Kirby – they weren’t answering their phones, and she wanted the video online as soon as possible. 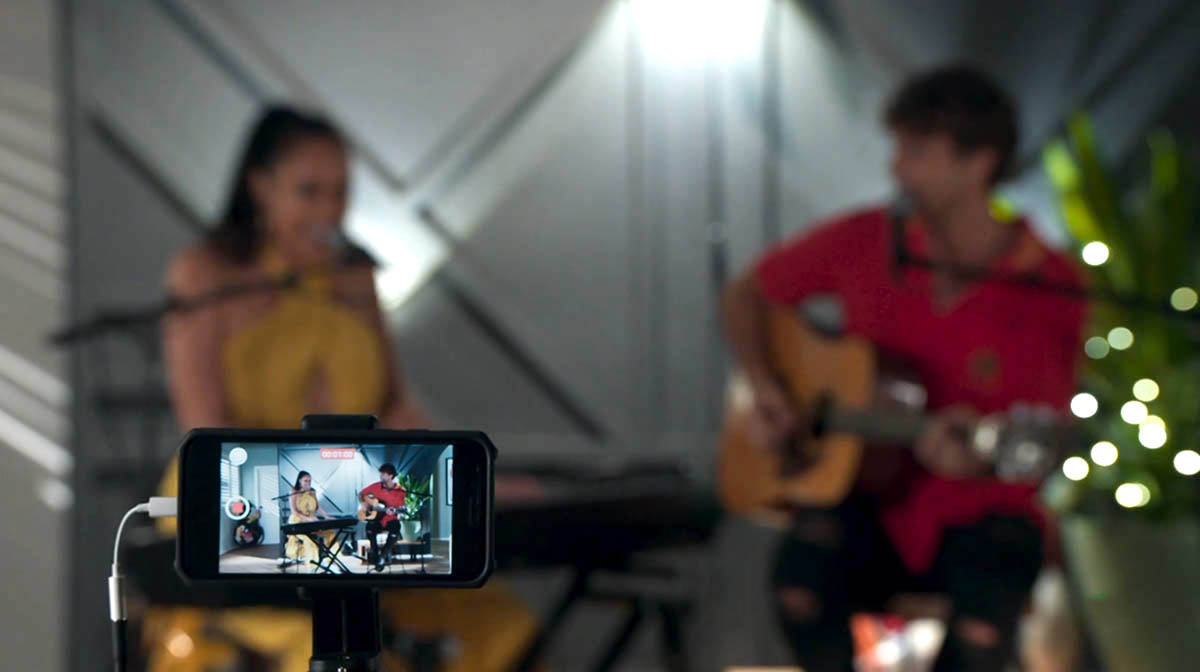 Theo was worried about getting the other band members offside, so double then triple-checked with Kirby that they were doing the right thing. 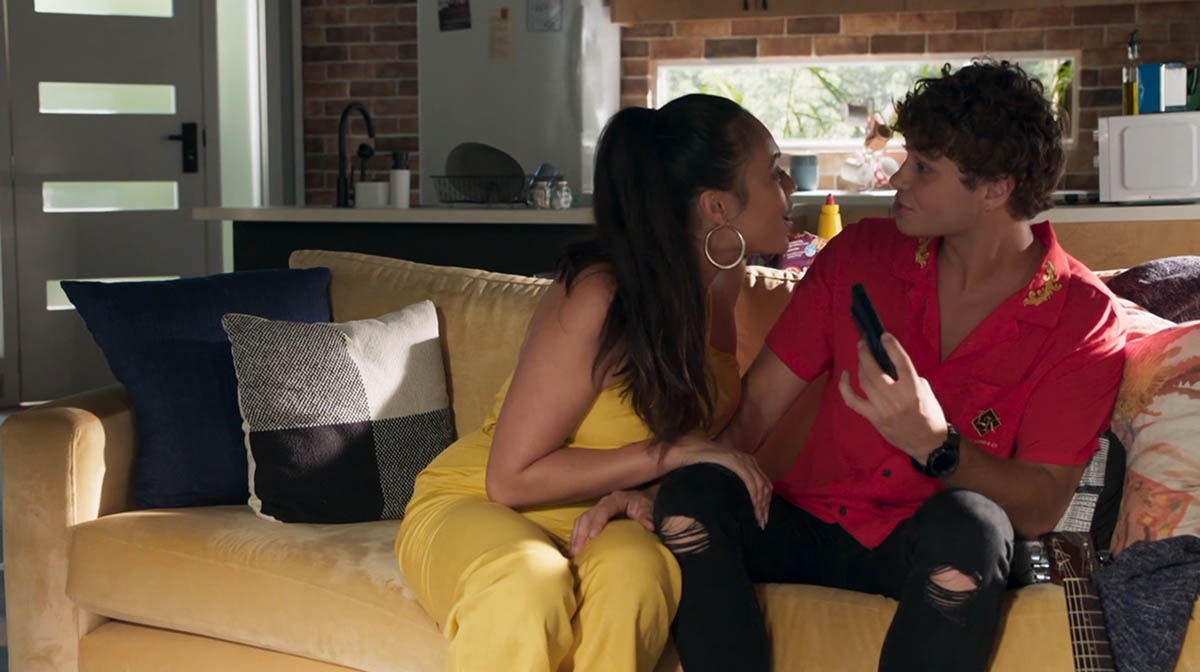 “Wait, just to check one last time… you are sure that Eden and Remi are going to be okay with us uploading this without them in it?” he asked. “And they won’t have a problem that it’s going on my channel instead of the official Lyrik one?”

Reassuring him that the band’s socials were tiny in comparison to Theo’s, Kirby asked him to stop second-guessing it and just post the video, telling him that getting them out to 50,000 people was the best PR they could possibly get.

“Trust me,” she assured him. “Eden and Remi will be stoked!” 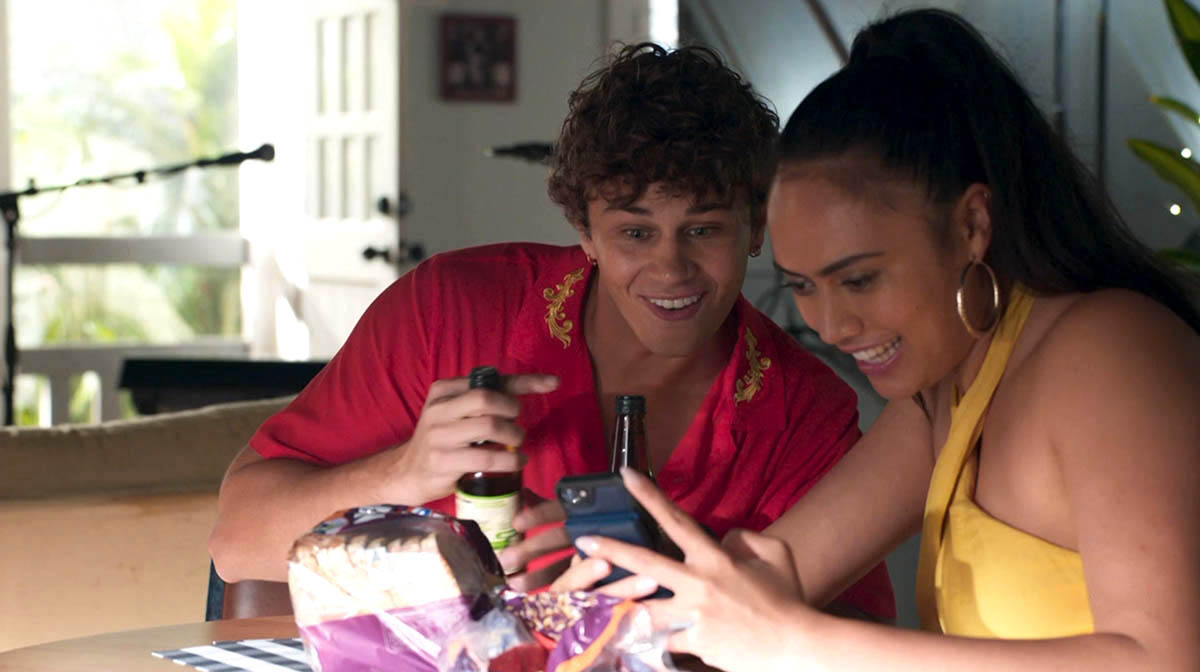 Their plan worked perfectly. Within hours the views were flooding in, and over 2000 of Theo’s fans had watched and shared his new career move.

Before they knew it, Theo and Kirby became the internet’s hottest duo, and it didn’t take long for them to get noticed. 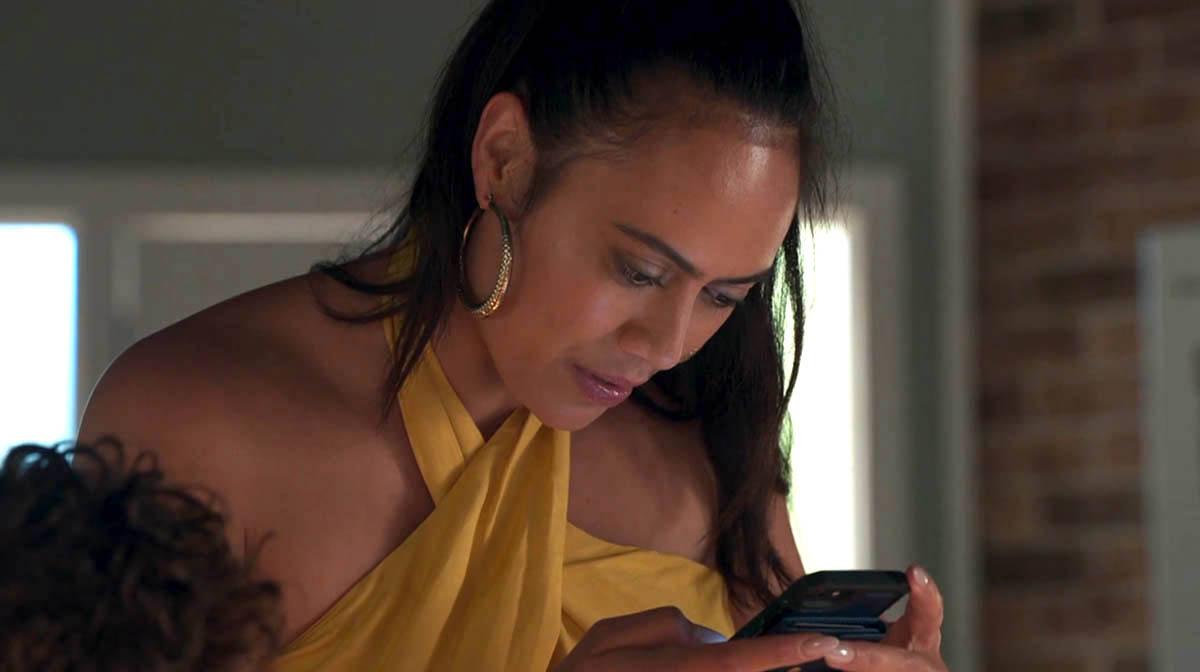 They soon got a DM from Tully Dixon, a music critic from online magazine Music World, and seemingly a big deal. While internet-savvy Theo suspected that it could be a hoax, Kirby reassured him that the guy’s account was verified – he’s the real thing!

The only problem was, Tully was already in the area and wanted to do the interview in an hour’s time!

This week, that hour ticks around quickly, and Theo and Kirby madly rush to try and get the whole band in one place before the important critic arrives. 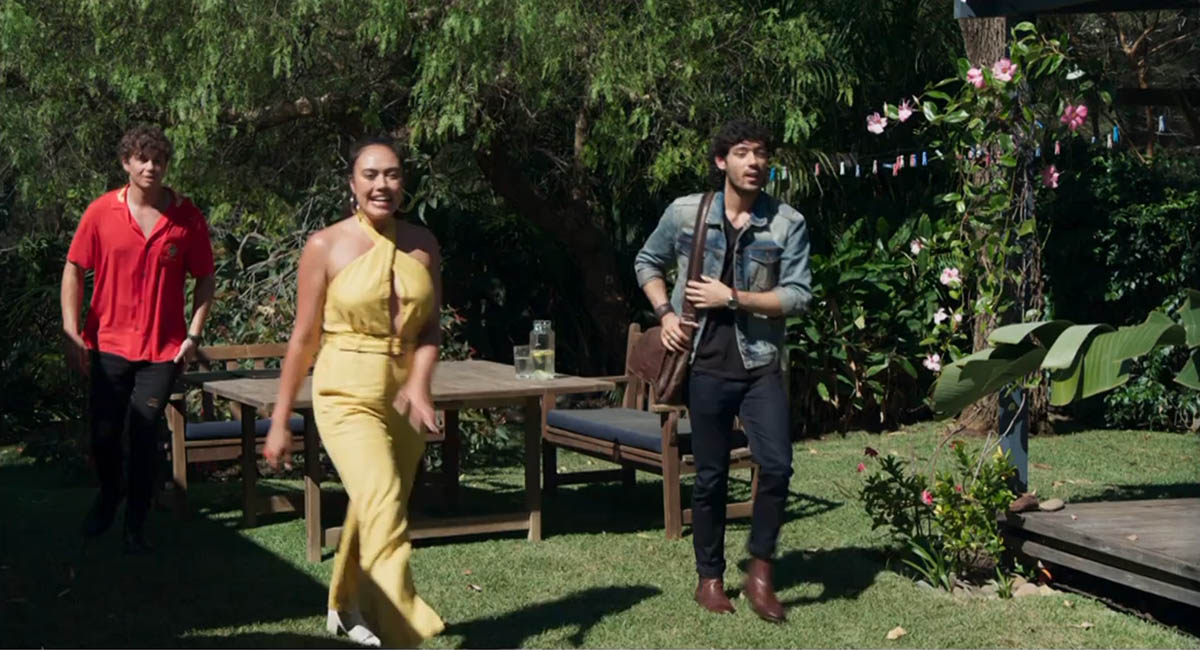 Unfortunately, there’s just not enough time, and the pair are forced to start the interview before they can get hold of Eden and Remi. 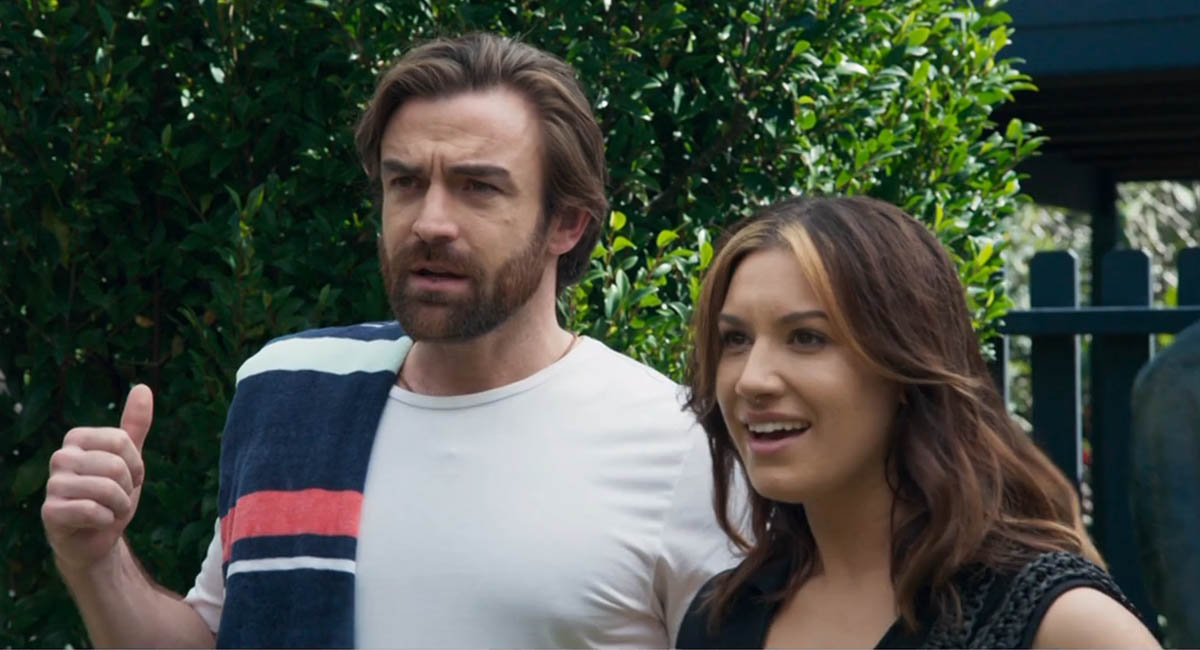 They do eventually bump into their bandmates, with Eden and Remi finally arriving back at the band’s new house on Saxon Avenue, but the interview’s already over – Kirby only just has time to introduce the band to Tully before he makes a swift exit. 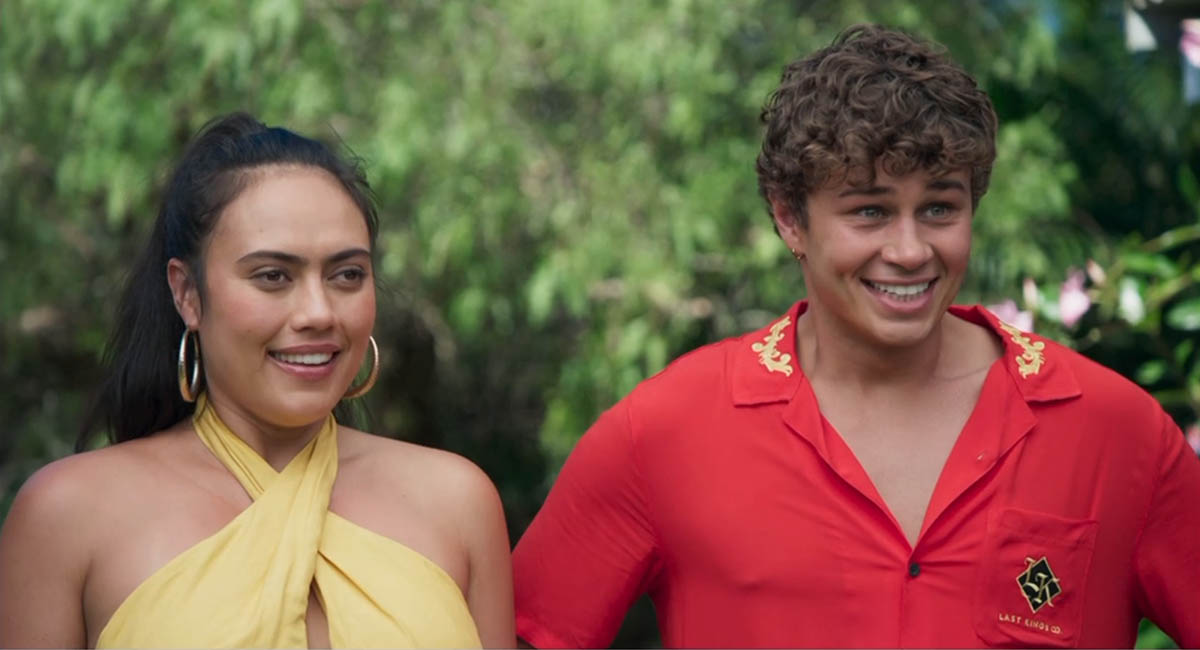 Kirby and Theo can’t keep the smiles off their faces – if Tully publishes the interview in Music World, they’ve got the band the publicity they’ve been dreaming of! 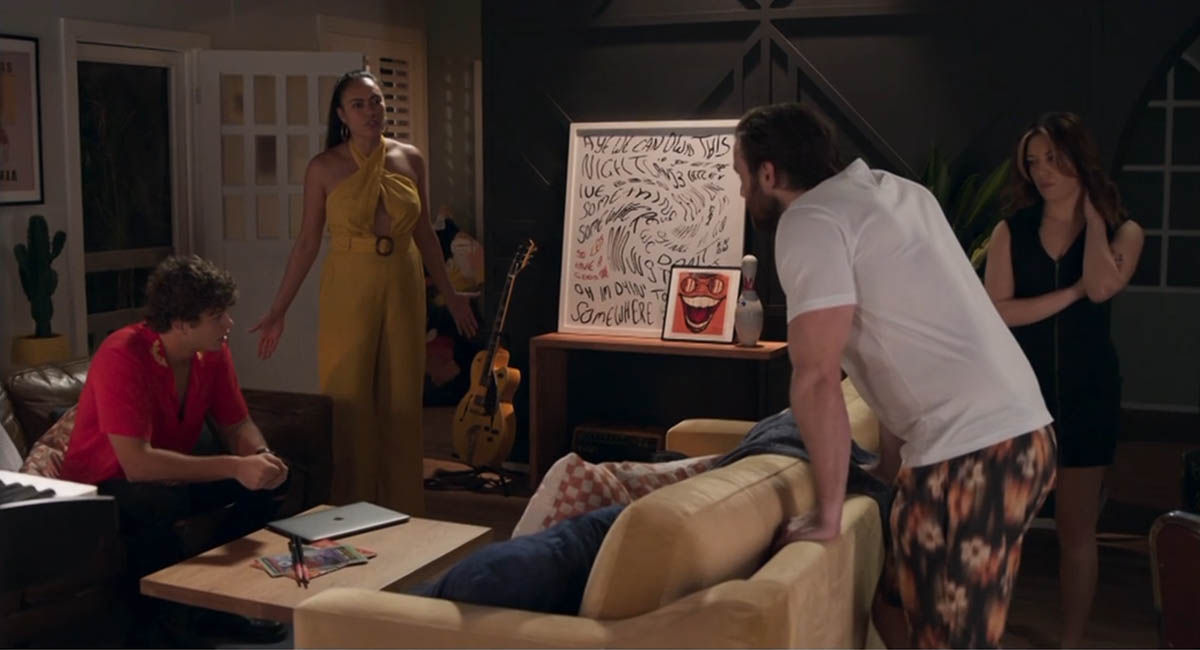 Yet it’s fair to say the band’s guitarist and bassist are far from happy to have been left out of their biggest interview yet.

Even the usually calm Eden is about to lose her temper, frostily telling Kirby, “we should have done it together.”

However, Kirby insists that when a career-making journalist squeezes you in last minute, “you don’t stuff ’em around,” implying that they couldn’t simply have turned him down and rearranged for another day. 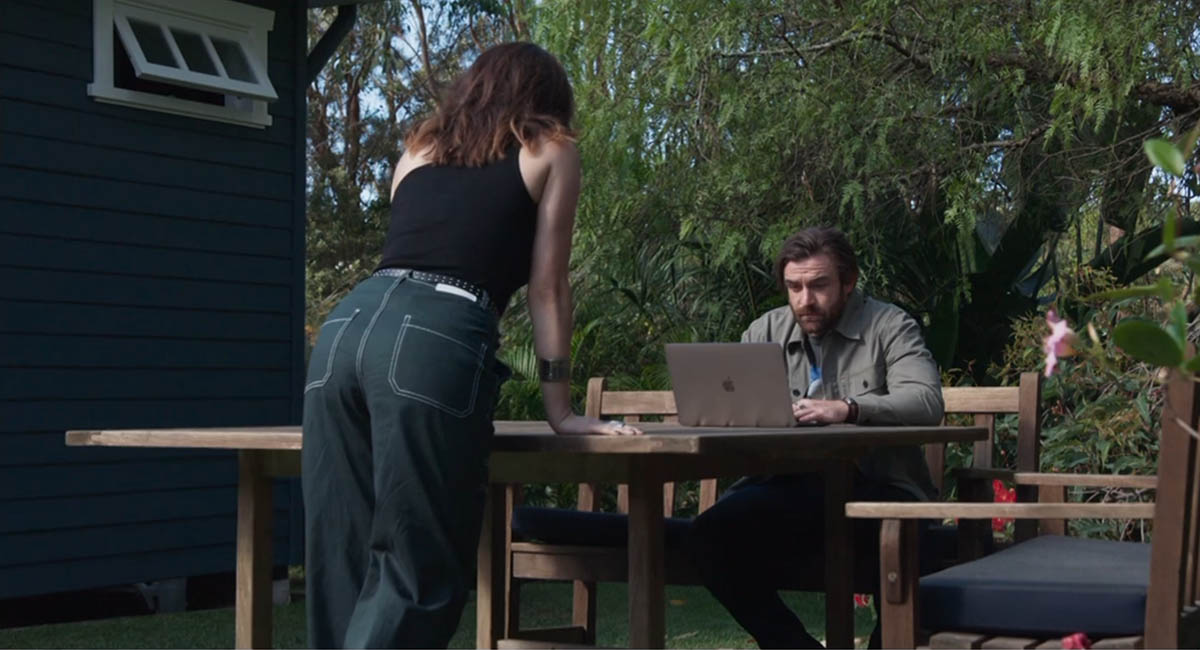 Theo tried to explain that they tried to stall him, but, at least for Remi, it falls on deaf ears.

As he and Eden chat later, Remi refuses to believe Theo’s story, telling her, “we’ve only known this guy for a couple of weeks, and he’s already gone behind our back with Kirby!” 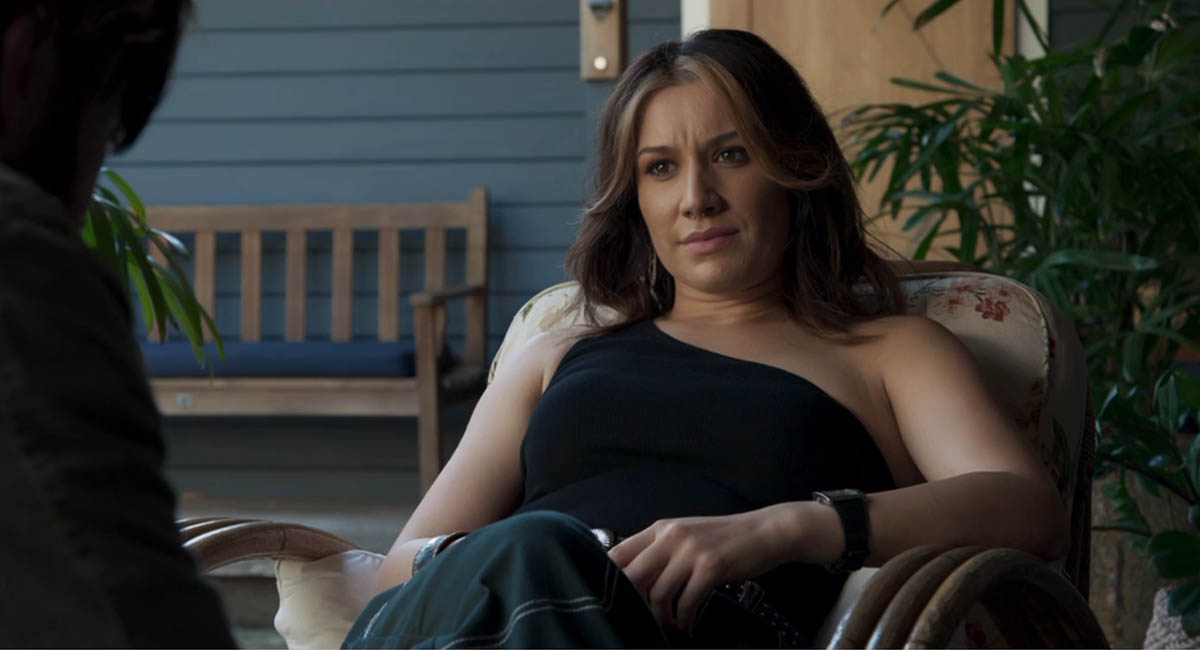 When Eden – who believes Theo when he claims he tried to stall the journo – tells him that they can’t exactly kick their new lead singer out already, it seems Remi has another plan…

“Maybe I’m the one who has to leave.” 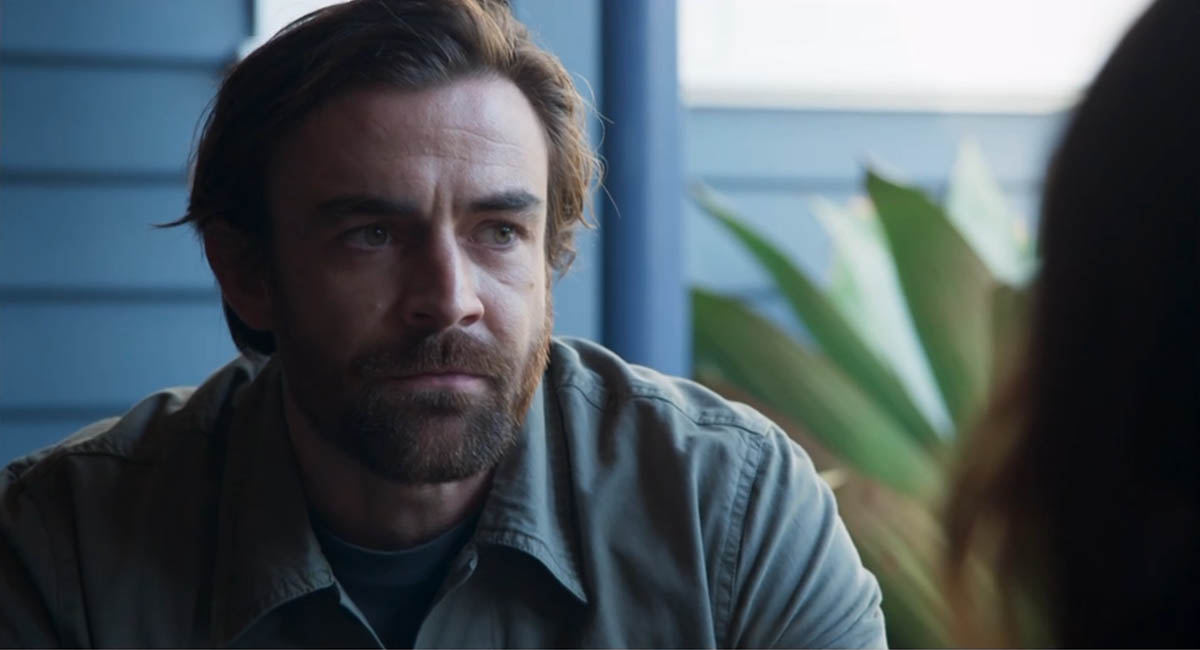 With Lyrik having already lost one member since their arrival in Summer Bay, are they about to lose a second?

And the drama doesn’t end there… 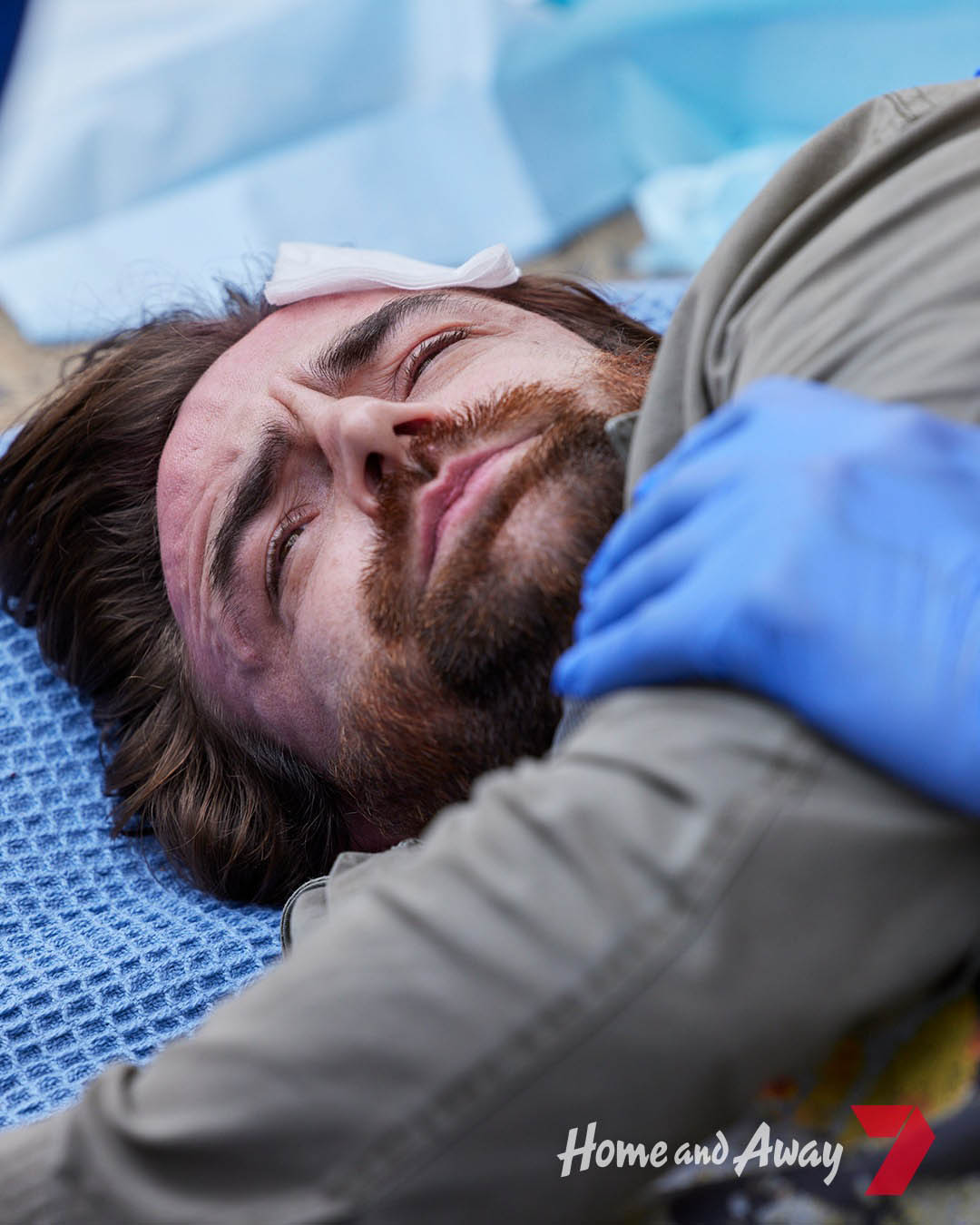 It looks like Theo and Kirby going behind his back are the least of Remi’s worries this week, as he finds himself in hospital after collapsing outside the surf club! 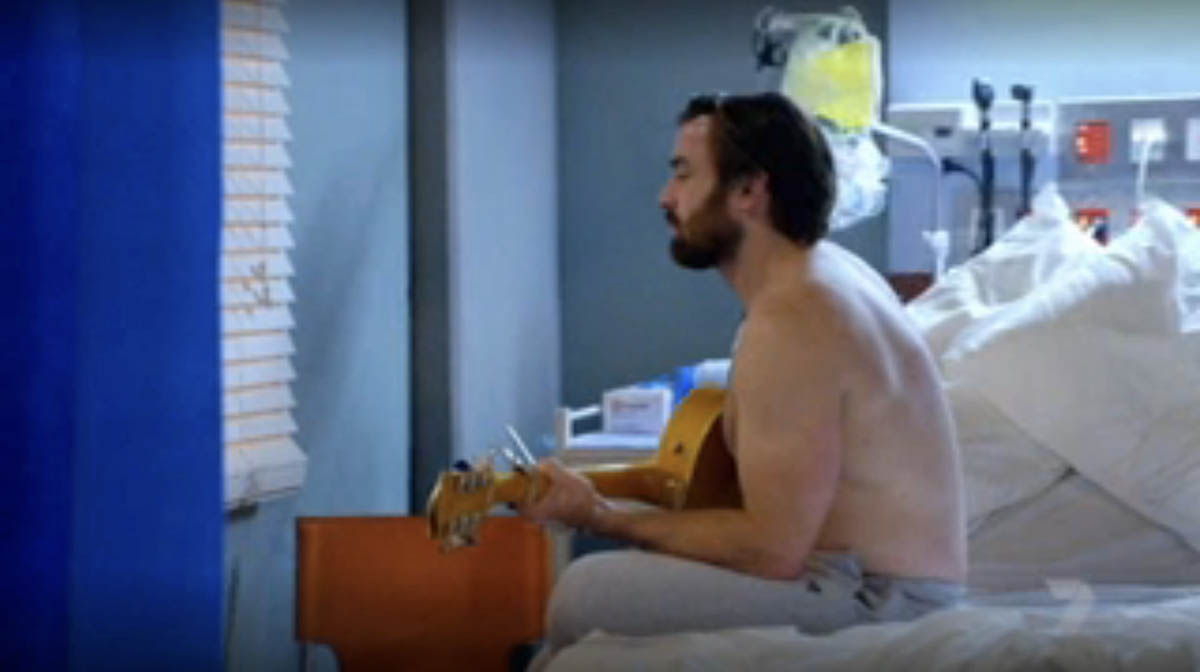 He doesn’t seem too concerned though, as it’s not long before he’s treating his doctors and passers-by to an acoustic performance on his guitar.

Ever the optimist, he even uses his hospital visit as an opportunity to flirt with his favourite doctor, new arrival Dr Bree Cameron (Juliet Godwin). 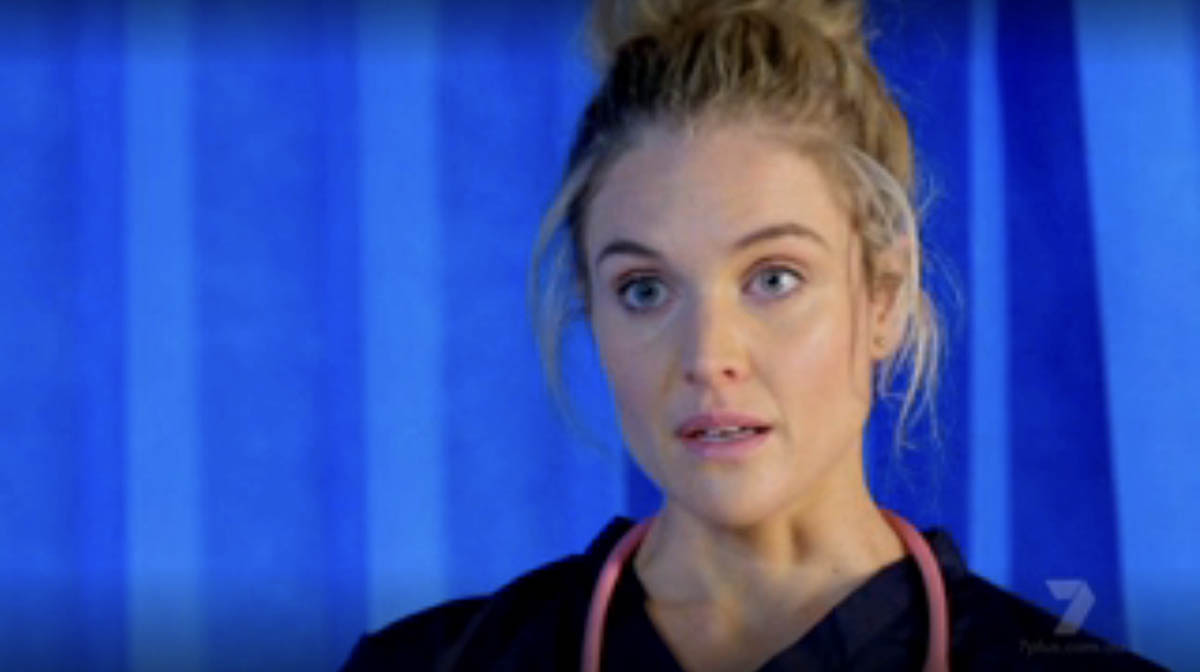 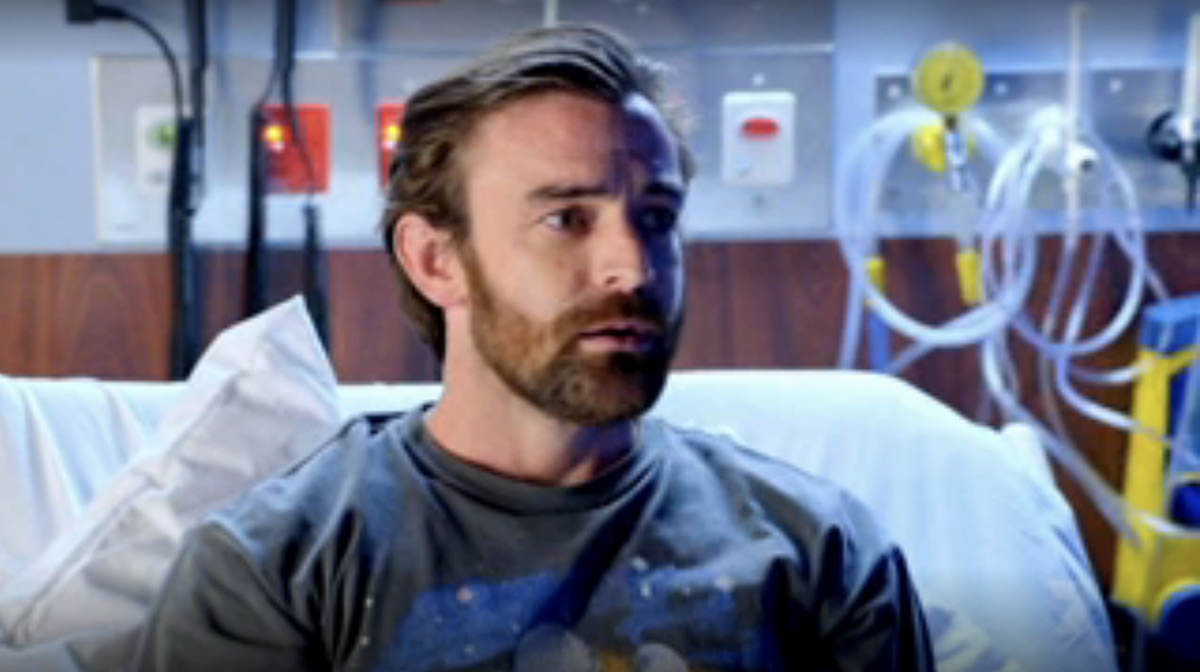 However, he’s about to be put in his place as the new doc reveals something she’s kept very much under wraps until now… she’s married!

As Heather frames Marilyn for abuse, is Maz’s secret daughter about to get her arrested?