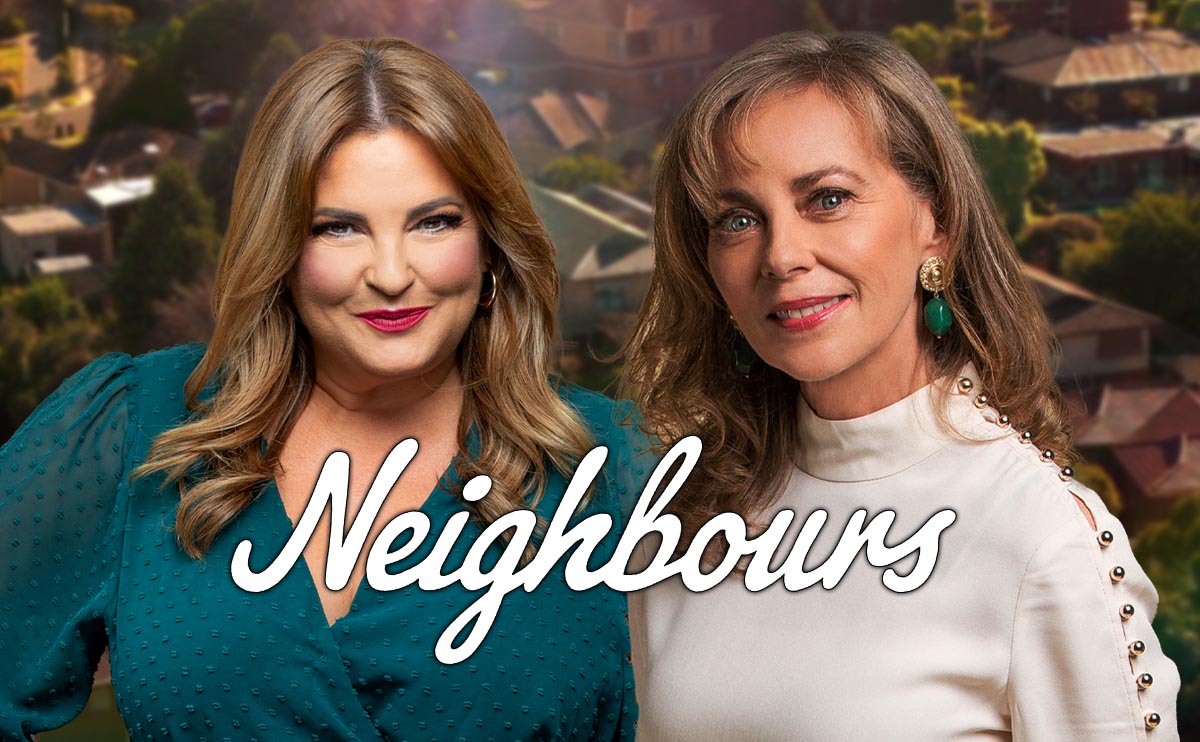 Coming up on Neighbours in the UK and Australia, Jane’s life hangs in the balance after a fall. Meanwhile, a shocking twist could see Terese suffer the same fate that Glen suffered some two decades ago.

Lives are in danger on Ramsay Street, with the drama ramping up as we head towards the end of the year – one through one’s own negligence, and the other through pure psychopathy! 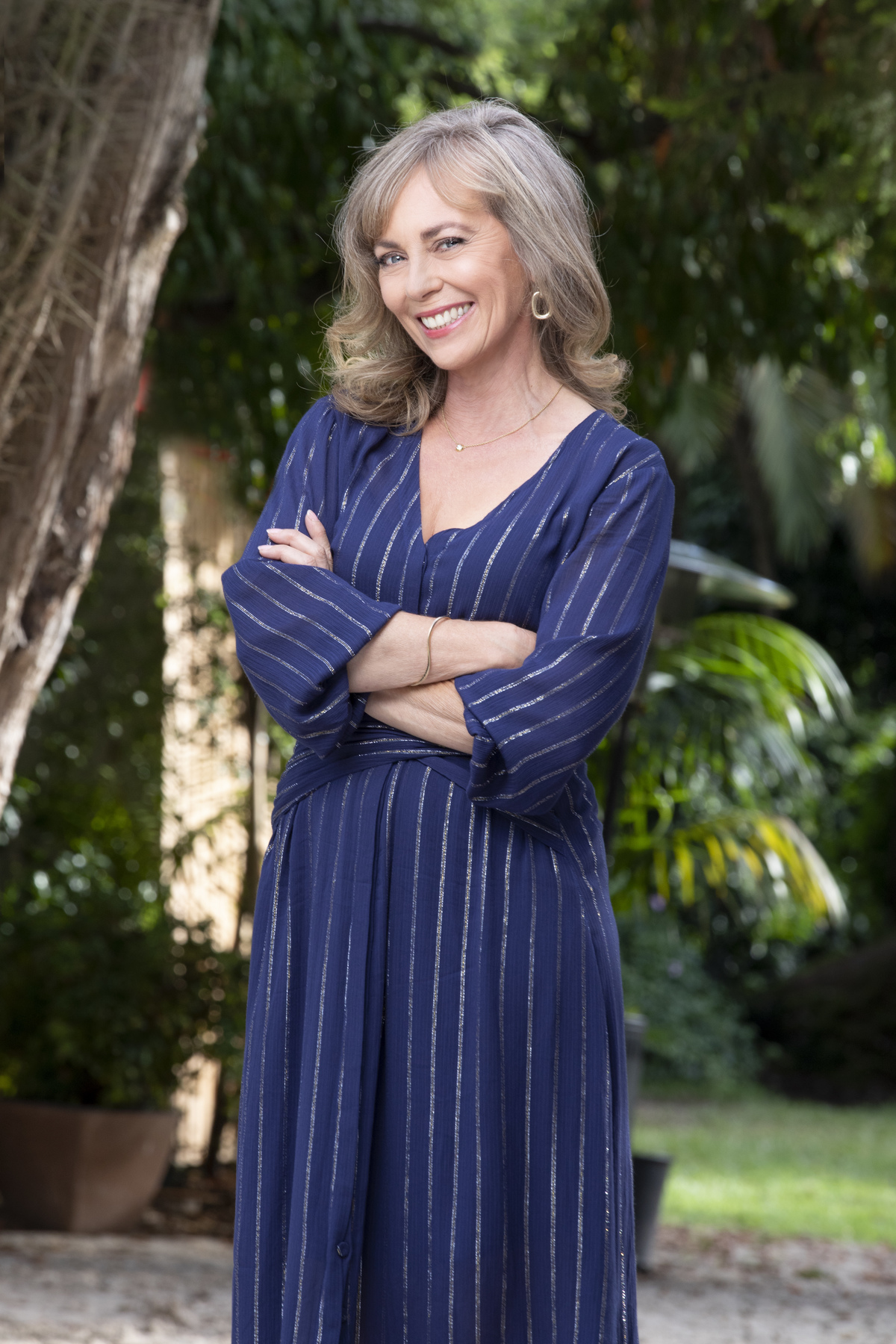 Jane Harris (Annie Jones) has always been a model citizen. After all, it’s how she grew to become “Plain Jane Superbrain” back in the 80s. But over the last few months, it seems she’s lost some of what made her the innocent role model of decades gone by

Not only has she supported her daughter Nicolette (Charlotte Chimes) after she took off with a child that morally wasn’t her own, and blackmailed her friend Paul (Stefan Dennis), but now her biggest betrayal has come out.

For weeks, she’s been spying on her daughter and the fathers of her granddaughter Aaron (Matt Wilson) and David (Takaya Honda).

After putting a video camera in Isla’s (Axelle Austin) teddy bear, Jane sat back for weeks waiting for something to go wrong. 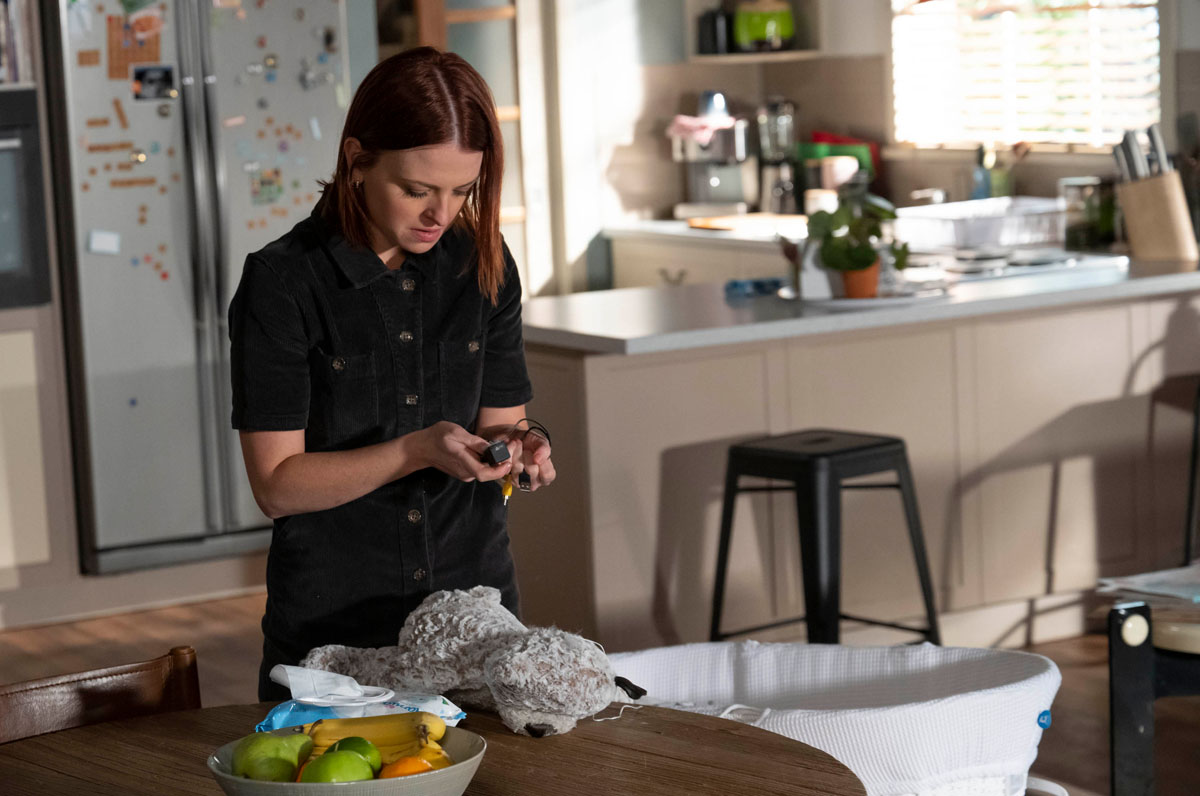 Only in the last week did Nicolette stumble across the find, and naturally she blasted the boys for it, believing that they didn’t trust her. But it soon emerged that Jane was the responsible party.

Confirming she never watched any of the footage, Jane assured her loved ones that she only did what she thought was right. After all, should Nic have run off again, it may have provided clues as to her whereabouts!

When the truth came out, all three were seething, wondering why Jane would do something so reckless that it almost destroyed the fragile relationship they have managed to rebuild over the past weeks. 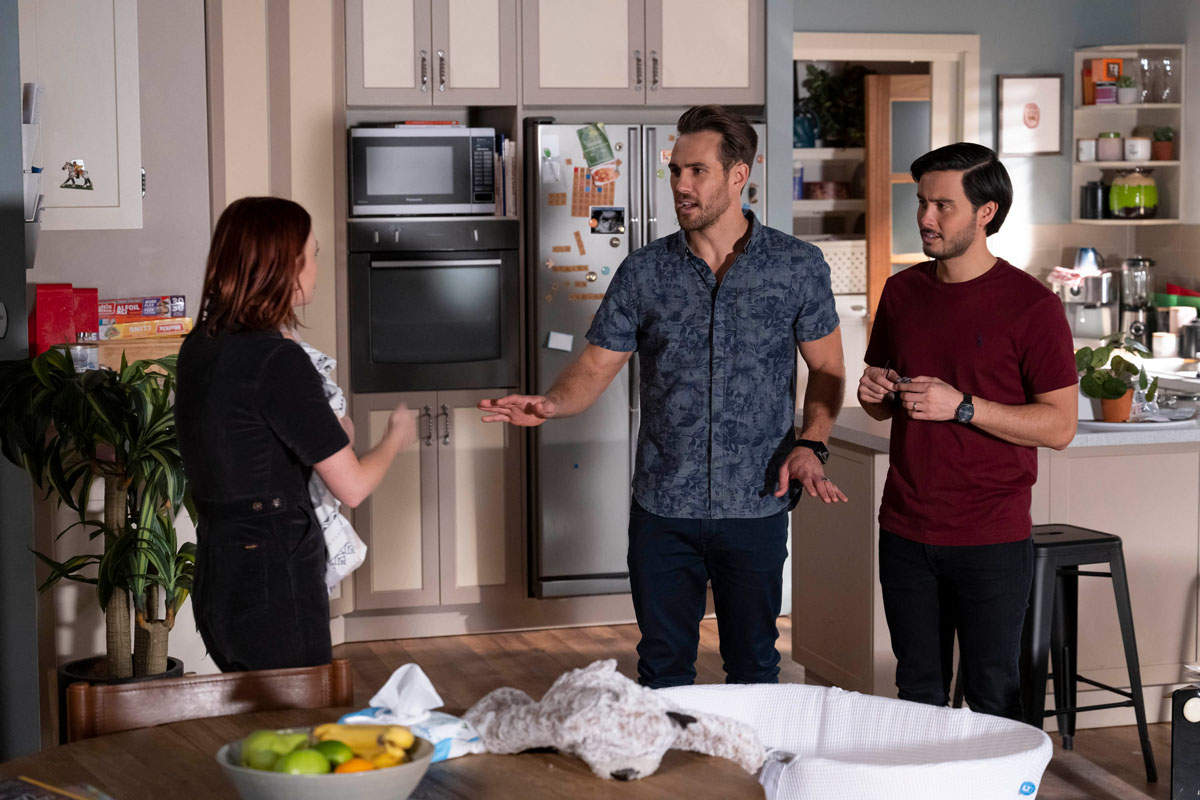 This week, the fallout from the situation continues, with the trio deciding to cancel the naming day they had planned to celebrate their new family unit.

Seeing the drama unfold and feeling guilty for her part in it, Jane tries to insert herself into the situation, urging them to push forward.

It seems that her interference, once again, is enough to send Nicolette into a tizz. Without a second though, the fiery redhead unleashes a barrage of criticism towards her mother, leaving their relationship, once rocky, now unstable once again.

When they decide once and for all to call things off, Jane makes a decision: she’s going to start decorating, hoping that seeing the party all ready and waiting for them will make them reconsider. 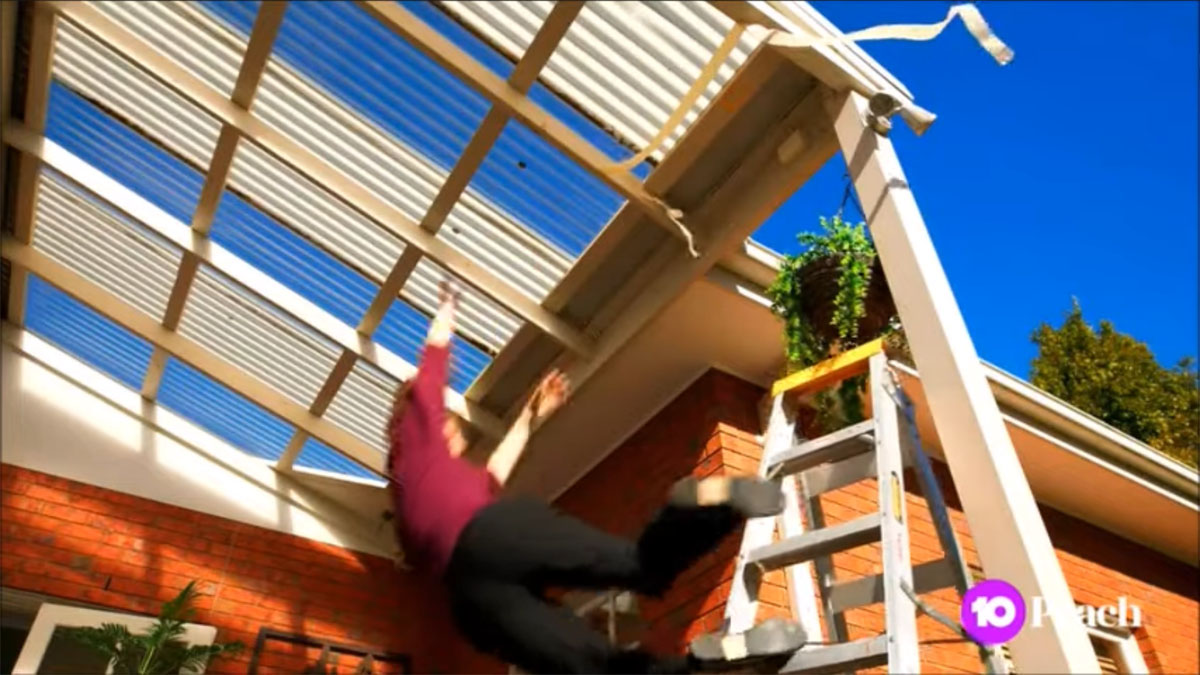 Heading over to No. 32, Jane begins to decorate for the naming ceremony.

Unfortunately, whilst up on a ladder, she overreaches and takes a nasty fall. 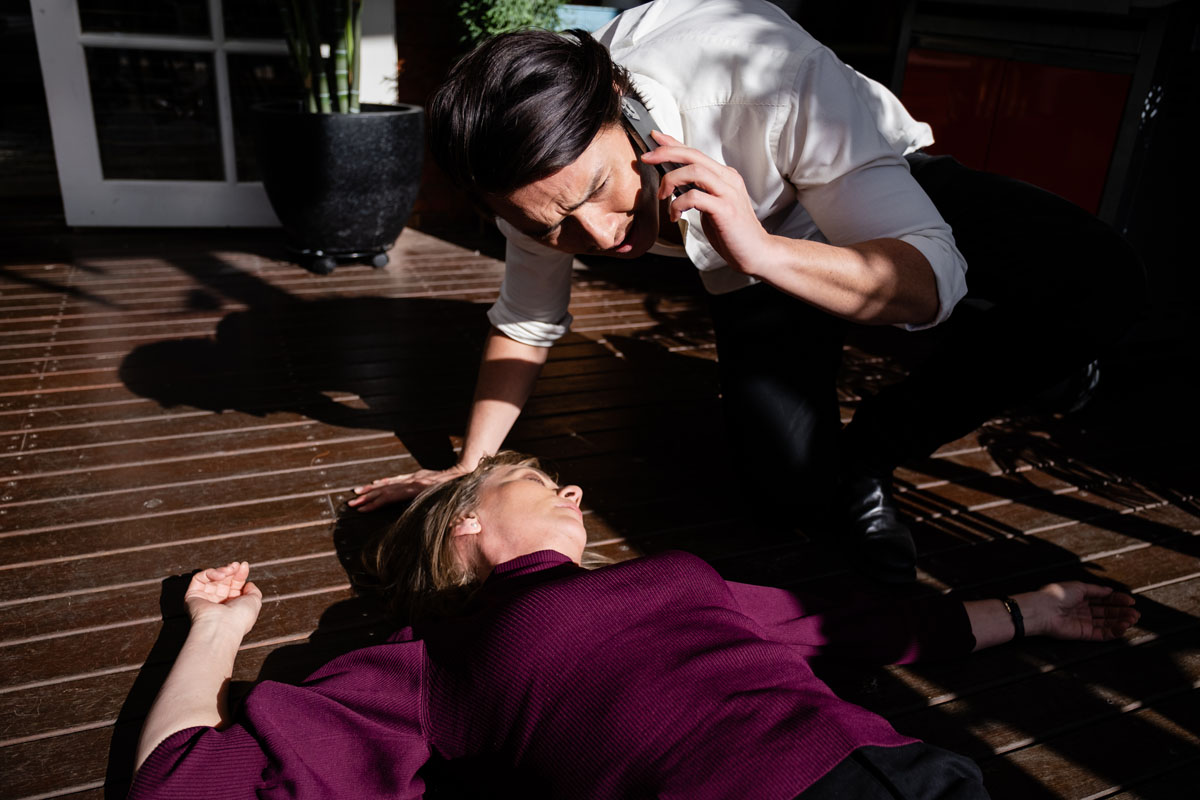 Thankfully, it’s not long before David’s brother Leo (Tim Kano) happens to pop over, and finds her unconscious on the patio of No. 32.

He calls and ambulance and lets her loved ones – including Nicolette – know what’s happened.

In the moment she finds out the truth, it’s as if everything in the past week slips away. All Nicolette wants is for her mother to be happy and healthy.

Rushing to be by her side, Nicolette takes her mother’s hand.

“Can you hear me? Mum?” she asks, hopeful that she will wake up. 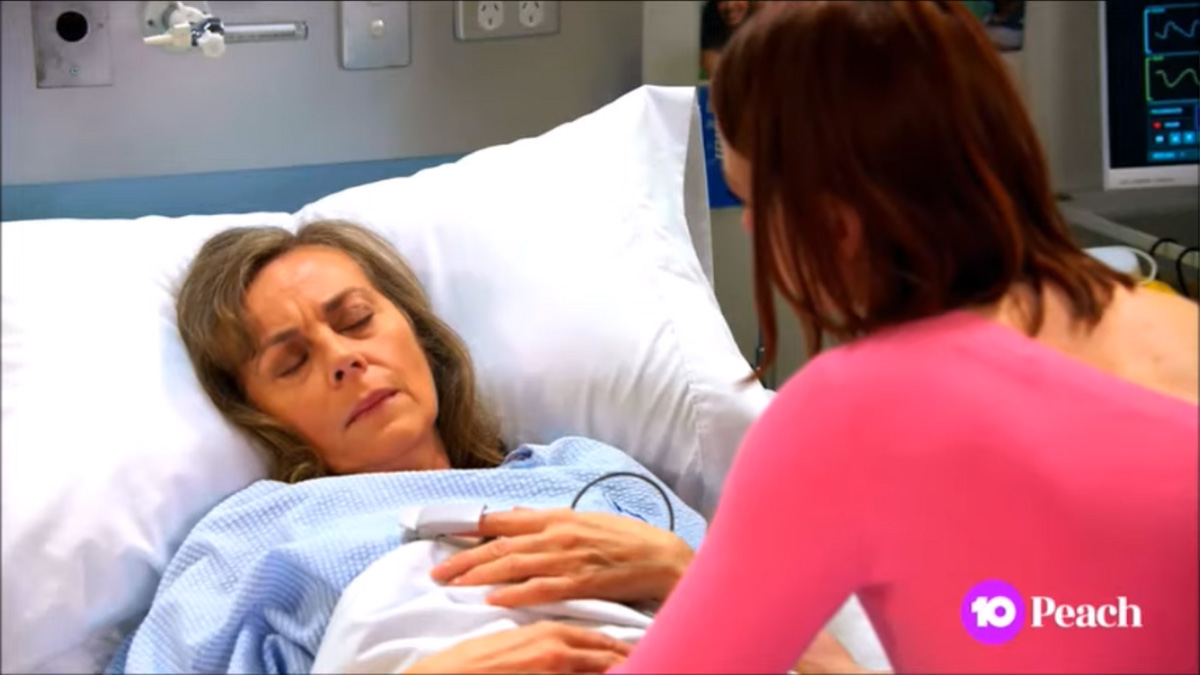 Meanwhile, Terese (Rebekah Elmaloglou) gets a surprise when Glen (Richard Huggett) arrives in Erinsborough, but it’s not the only shock in store. 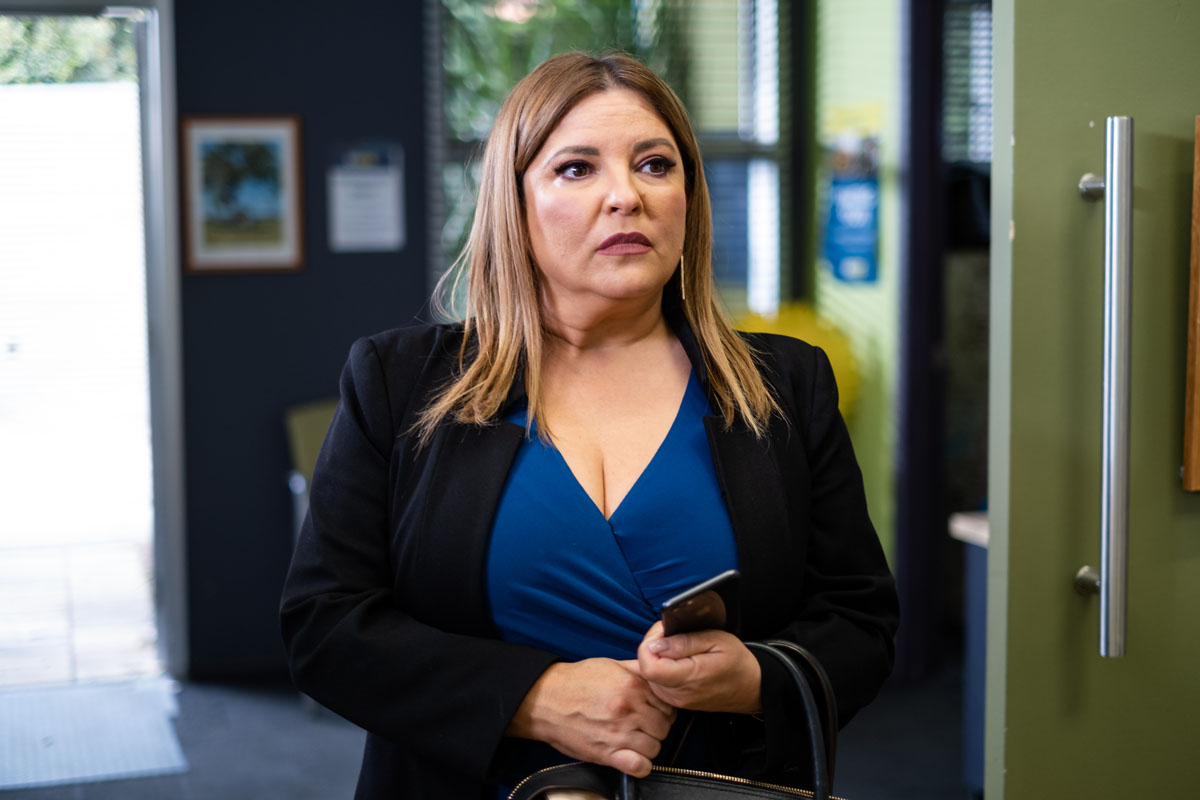 Last week, whilst in Queensland, the pair met, with Glen also making contact with his estranged half siblings Paul (Stefan Dennis) and Lucy (Melissa Bell). Although he was elated to see Lucy, it wasn’t the fairytale reconnection for the brothers.

After all, Paul did do Glen dirty 30 years ago, as explained in the above video from the Neighbours YouTube channel. 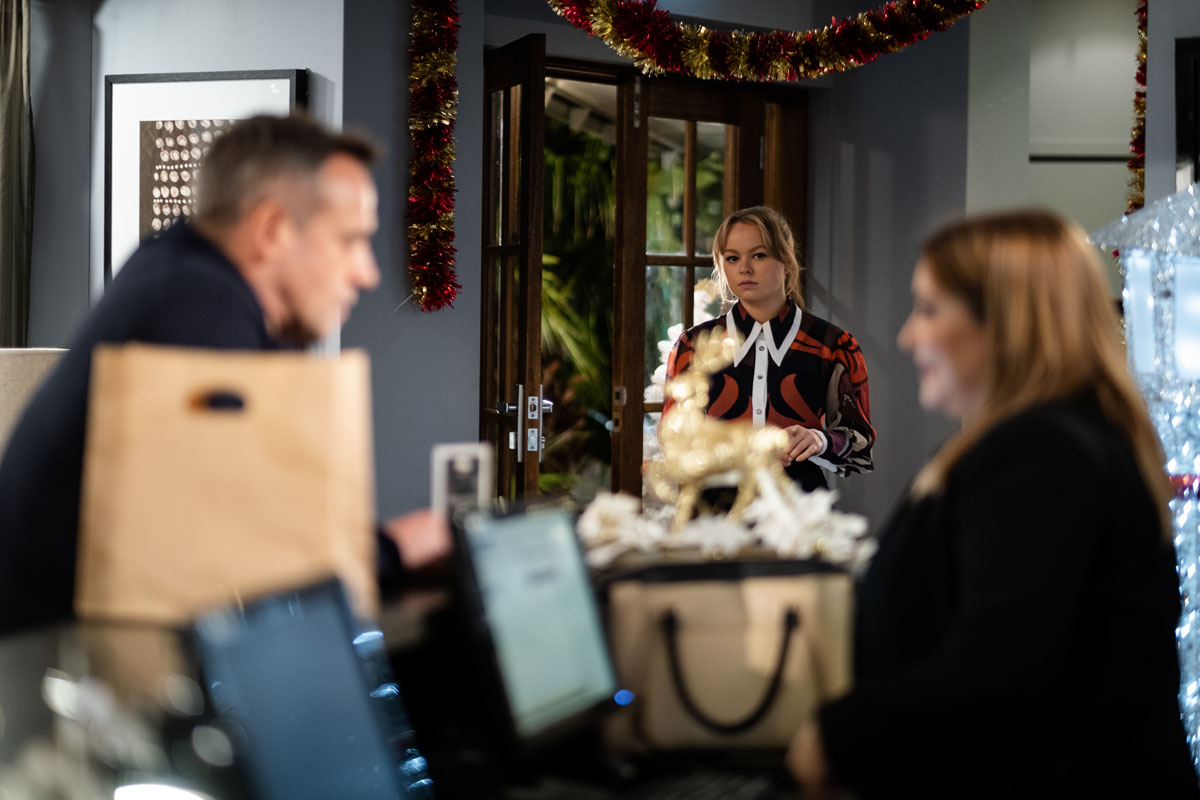 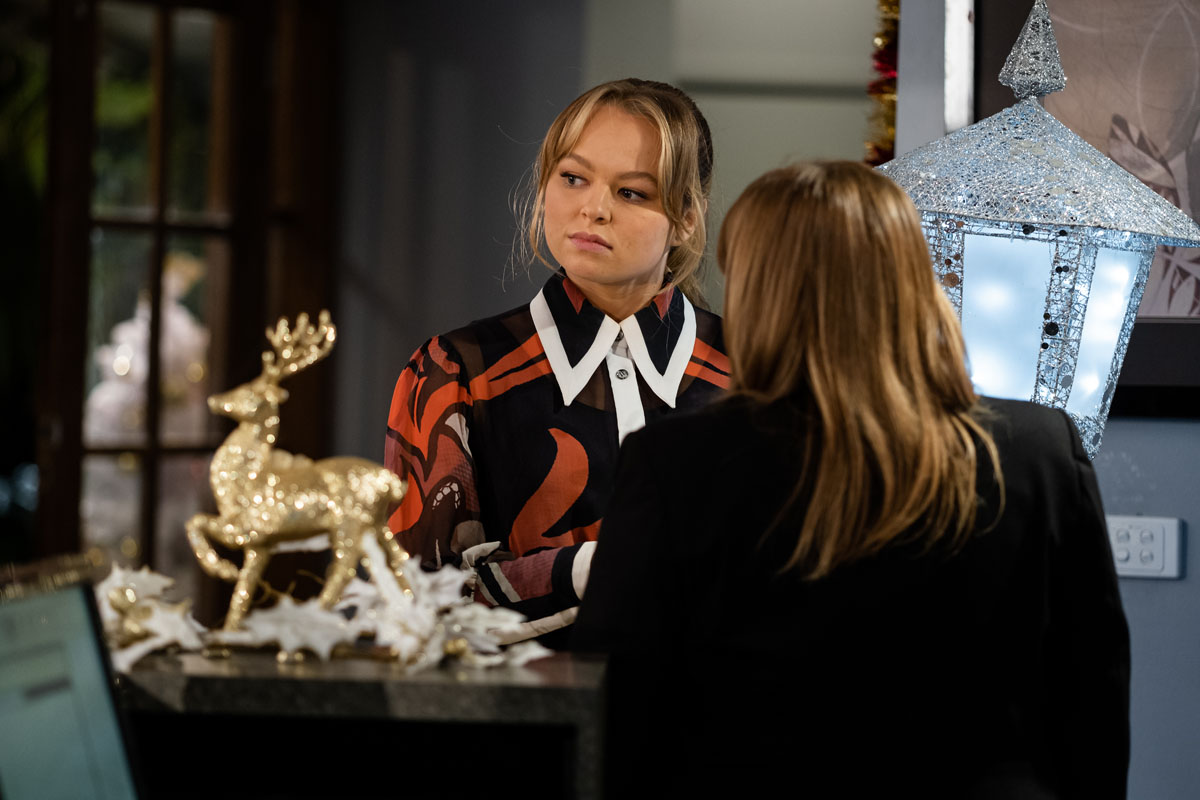 This week, Terese and Glen find themselves reconnecting, much to the chagrin of Paul’s granddaughter Harlow (Jemma Donovan), who obviously wants Terese to reconcile with Paul. 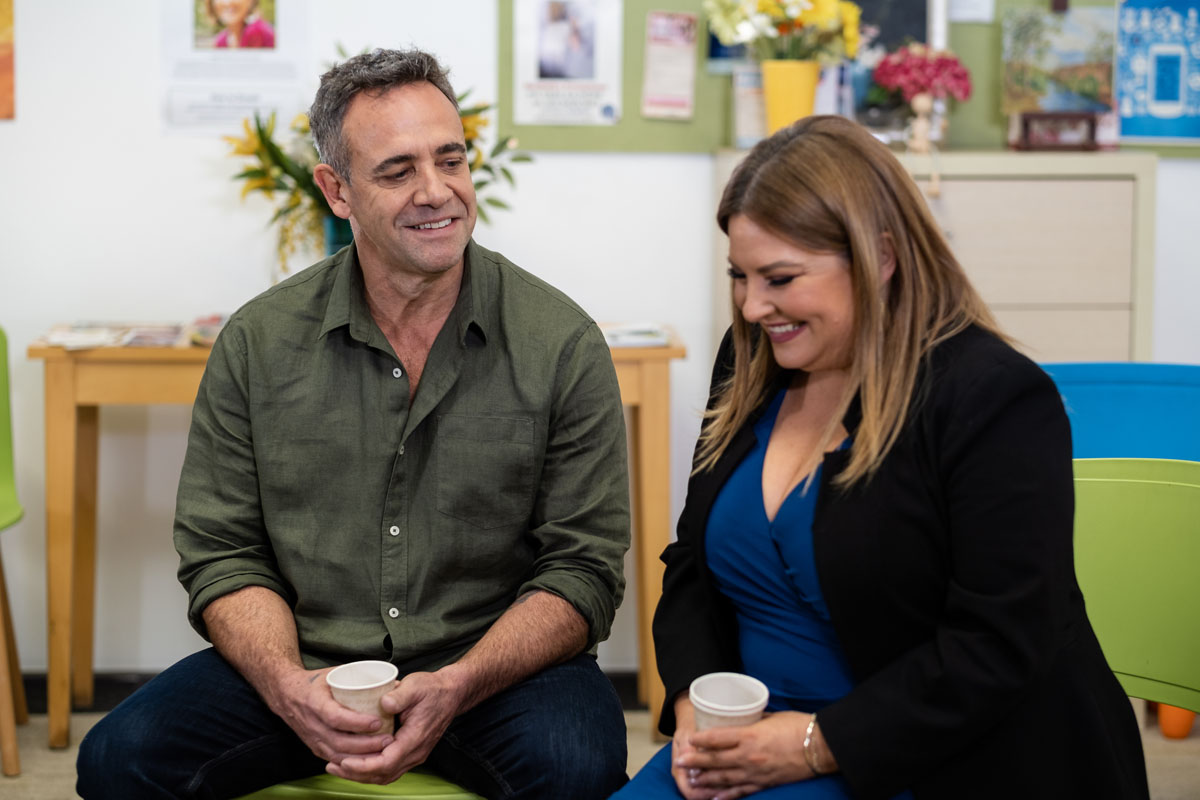 However, when the pair go to an AA meeting together, the bond strengthens even further Terese as realises they have more in common than she thought.

Will Paul find his brother to be his next love rival?

However, perhaps Terese won’t be around to see that happen…

A new promo currently airing on the UK’s Channel 5 has shown a drunken Terese confront Harlow on the roof of Lassters. 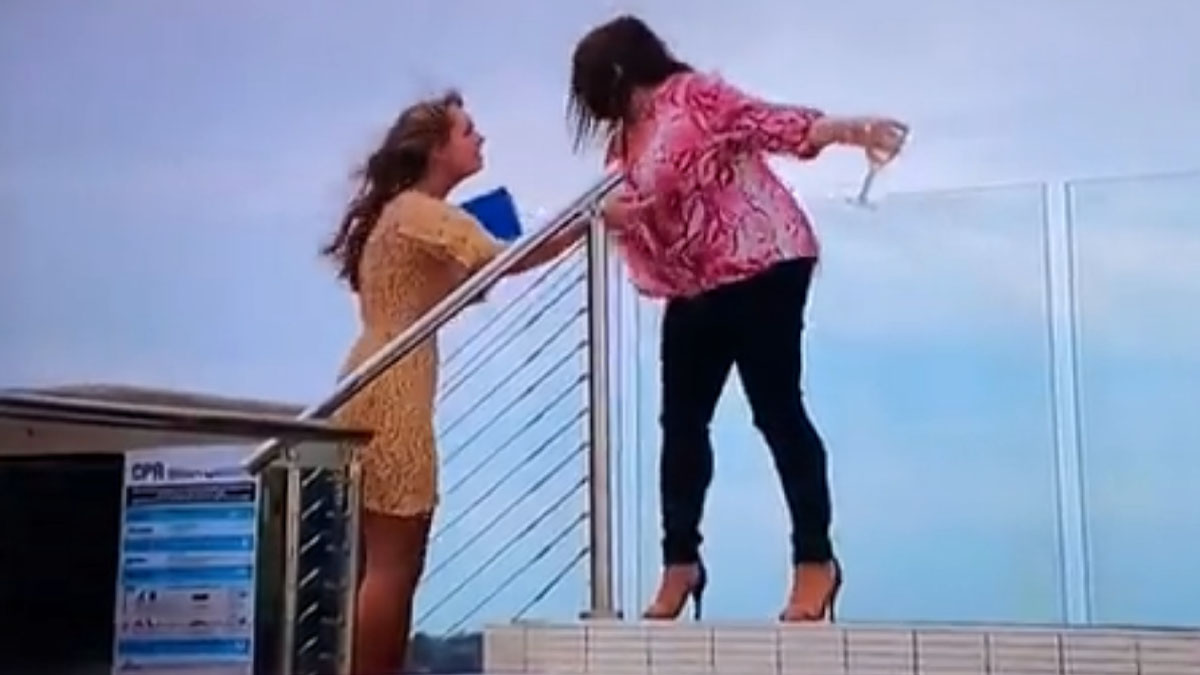 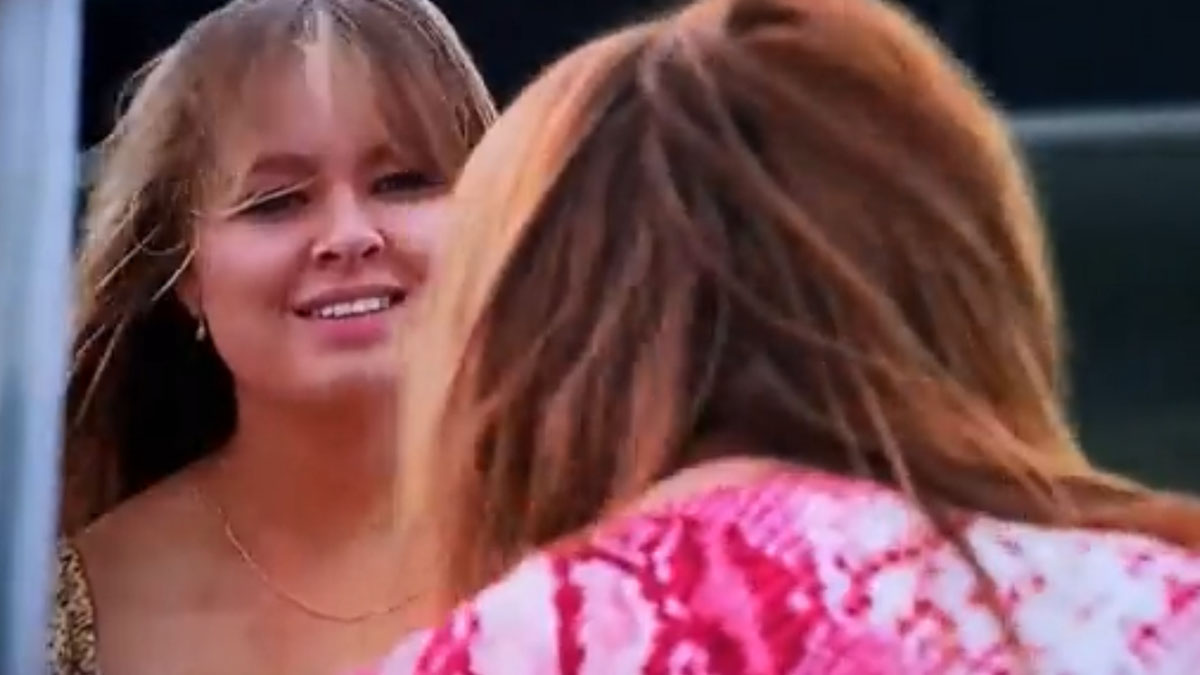 As a voiceover of Chloe (April Rose Pengilly) stating “Harlow might be turning into a psychopath” is heard, we see a shot of Terese holding onto the hotel roof.

Once the promo cuts the black, we hear a haunting shriek of terror. 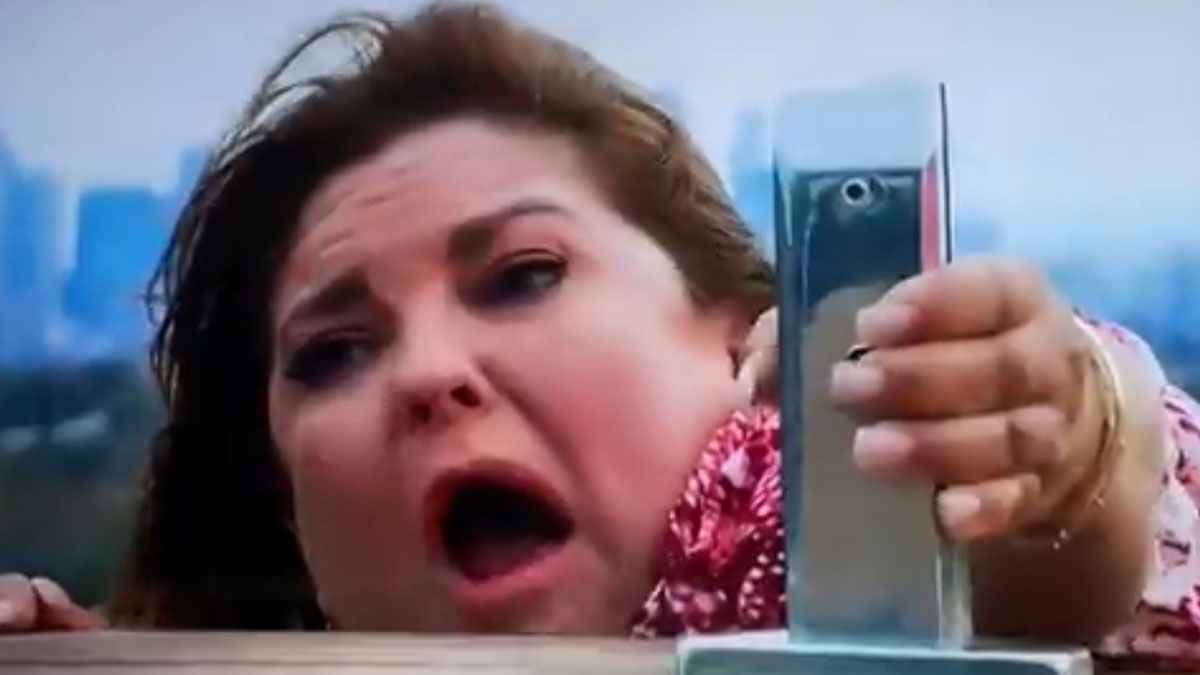 Long-term viewers will remember that a fall from the roof of Lassiters is what left Glen paralysed some two decades prior.

The hotel may have grown dramatically in height since then, now sporting a tower, but it seems Terese may be about to suffer an ironically similar to the fate to the one suffered by her brother-in-law all those years ago!

Australian viewers will see these scenes from Thursday 18th November, while UK viewers will have to wait just a few days more, until Wednesday 24th November.

Kyle’s furious Roxy told Sheila about his cancer diagnosis. With emotions at a high, Sheila comes up with the idea of honesty boxes. A way for them to communicate in a calmer way before they explode at each other.

Amy backs out of telling Chloe that Mick’s squatting when she realises Mick may also have something over her.

Terese returns from Queensland and admits to Susan things would have been much worse if it had not been for Paul’s long lost brother Glen. Terese doesn’t expect she’ll see Glen again, but is she wrong about that?