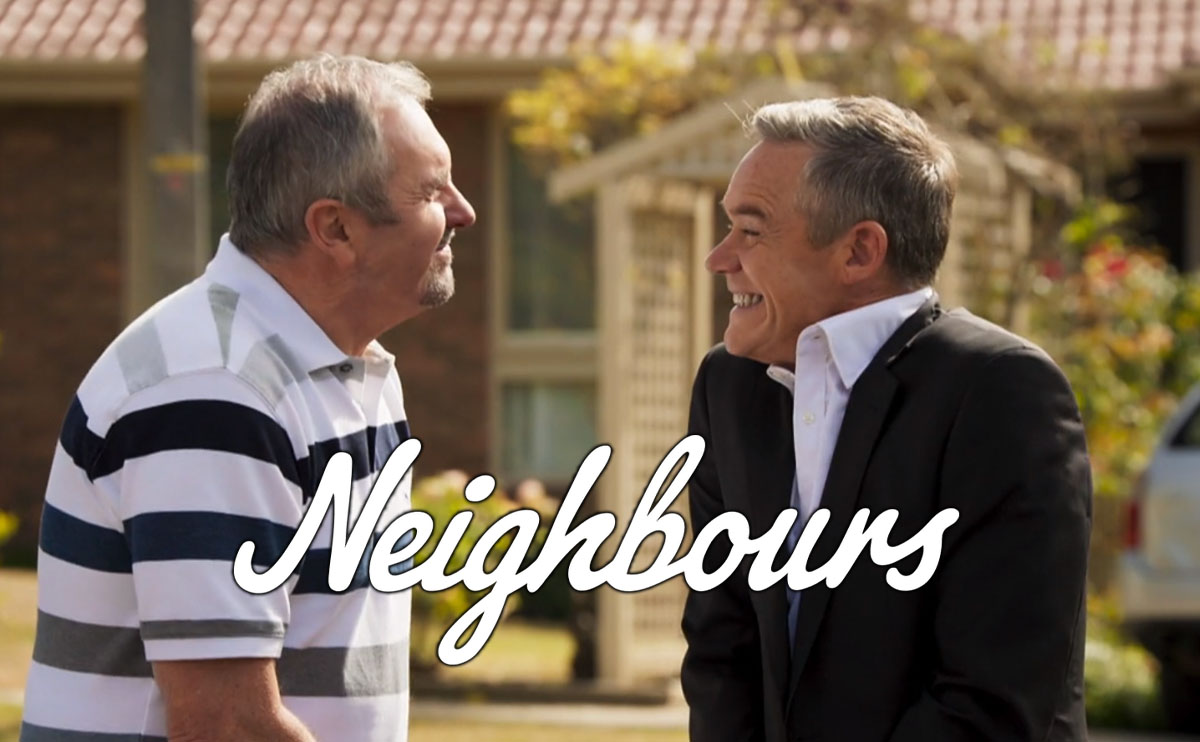 Coming up on next week’s Neighbours in the UK, Karl and Paul form an unlikely alliance against a common enemy. Meanwhile, Hendrix and Mackenzie’s planning a future lands them in an uncomfortable position.

These episodes will air from Monday 14th June.

For years, Karl Kennedy (Alan Fletcher) and Paul Robinson (Stefan Dennis) have never really seen eye to eye. The former, a loyal doctor who holds family in high esteem. The latter, a ruthless businessman who will stop at nothing to service his property and bank account. 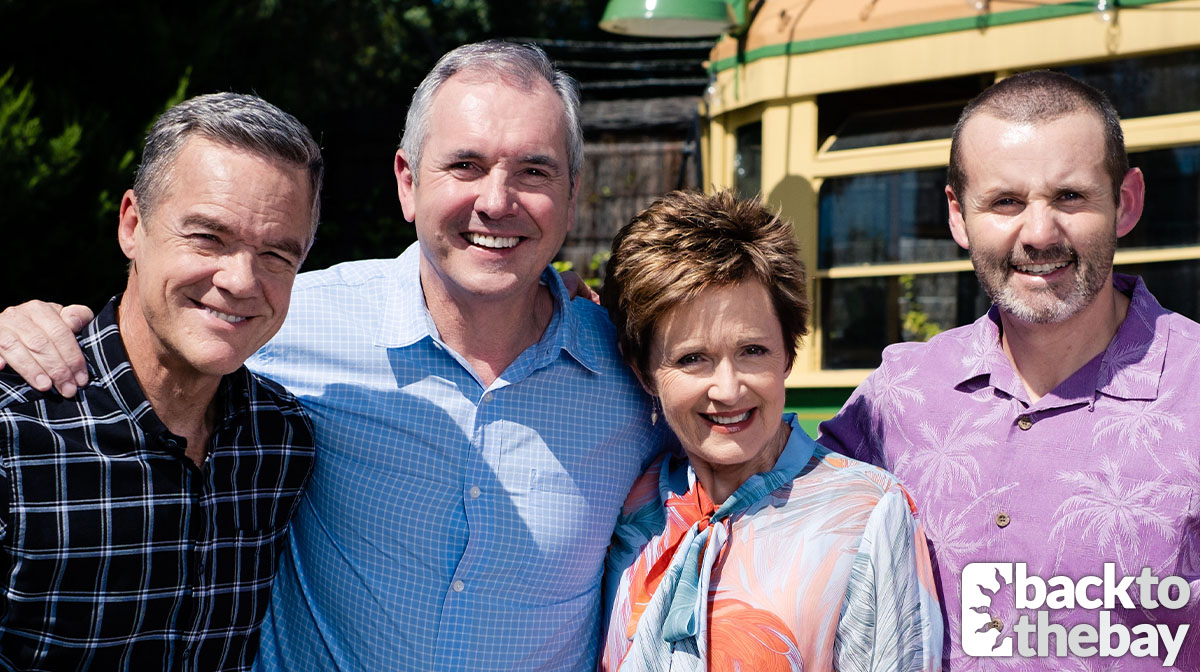 However, there’s an old adage that brings the pair closer than ever before – the enemy of my enemy is my friend. 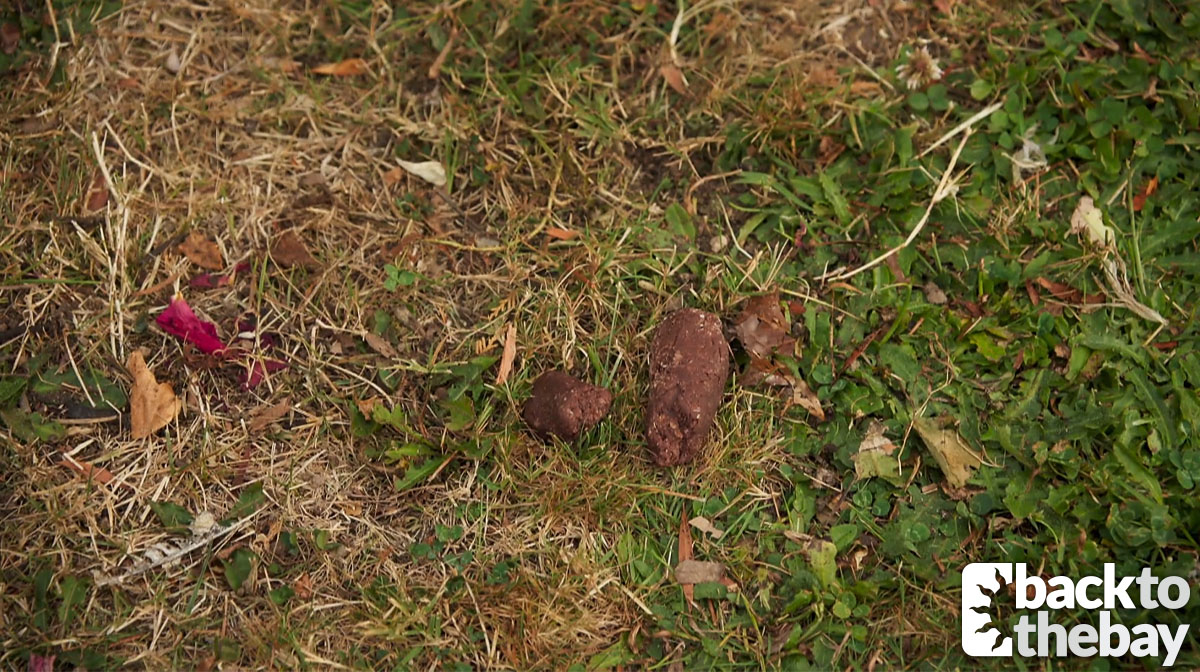 It all begins when Karl stumbles across some dog poo on his front lawn whilst out watering his garden.

Knowing that the only resident on the street that owns a dog is Vera Punt (Sally-Anne Upton), who lives down at little-seen No. 34 Ramsay Street, Karl seethes. When she walks past, he calls her over to give her a piece of his mind. 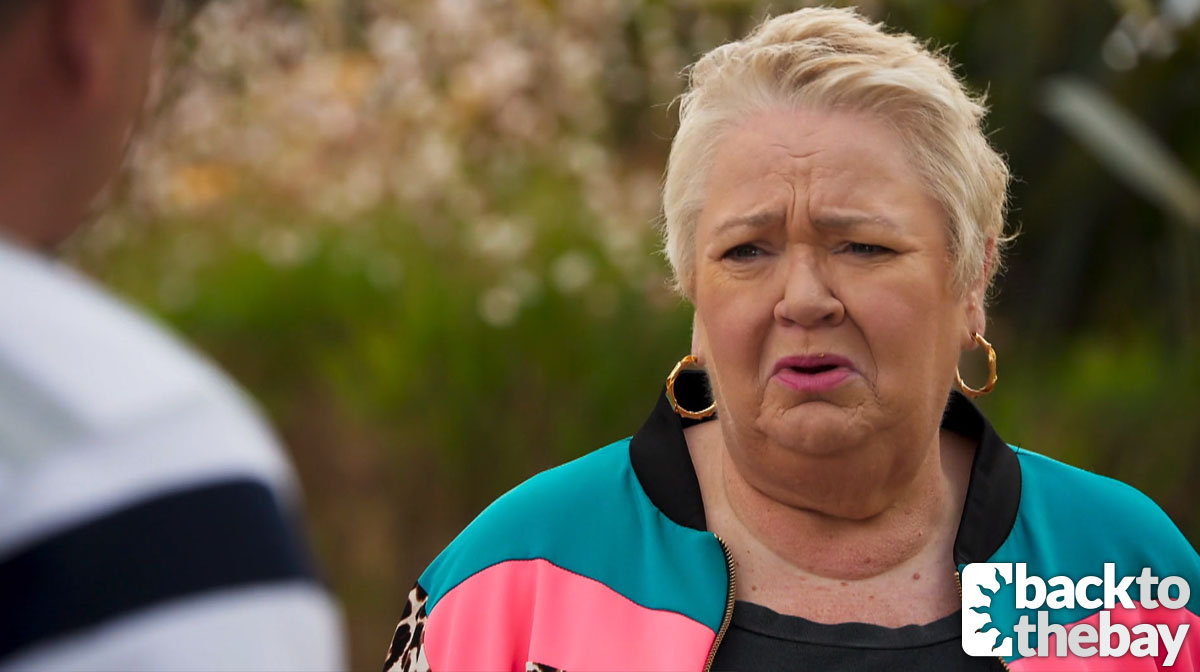 She shrugs it off, unsure of what the problem is, and quipping that maybe Karl should stick to using the bathroom indoors. Although she feigns innocence, it is clear that she knows more than she is letting on. 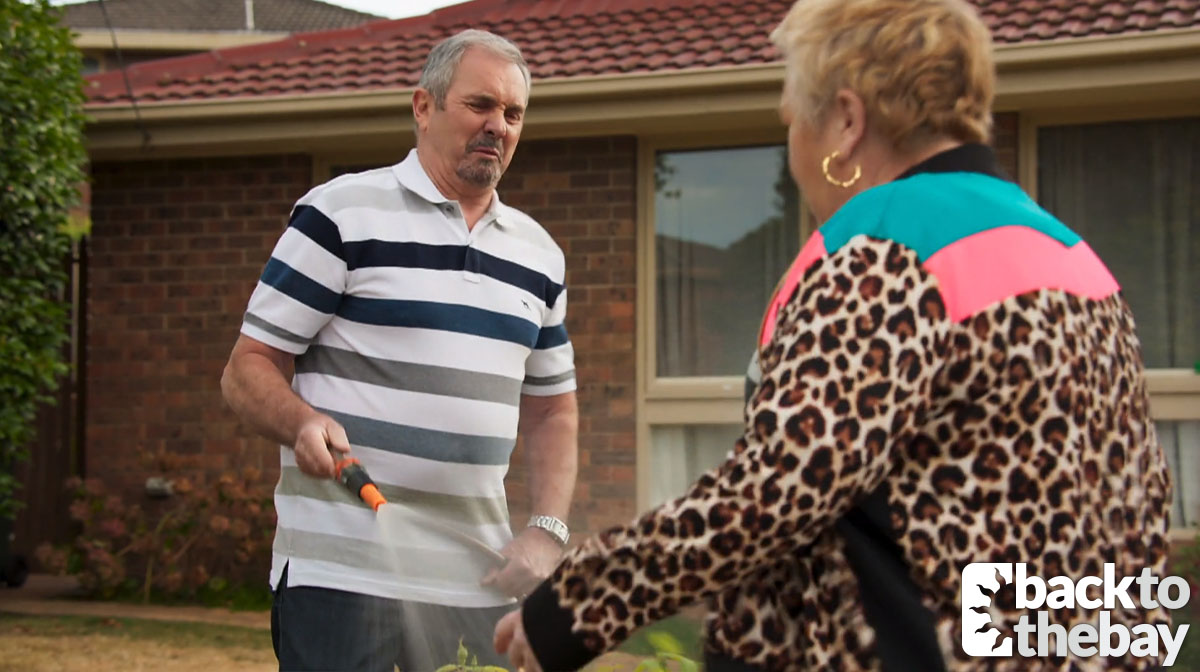 In rage, Karl accidentally lets go of the hose, drenching the unlikable neighbour in water. He is genuinely sorry, claiming it was an accident, but she storms off assuming it was a purposeful act of vengeance.

Not hours later does the resident medico find a big pile of manure on his doorstep.

Karl, furious at his neighbour’s tenacity, marches down to No. 34 with a wheelbarrow full of manure, ready to repay the favour. 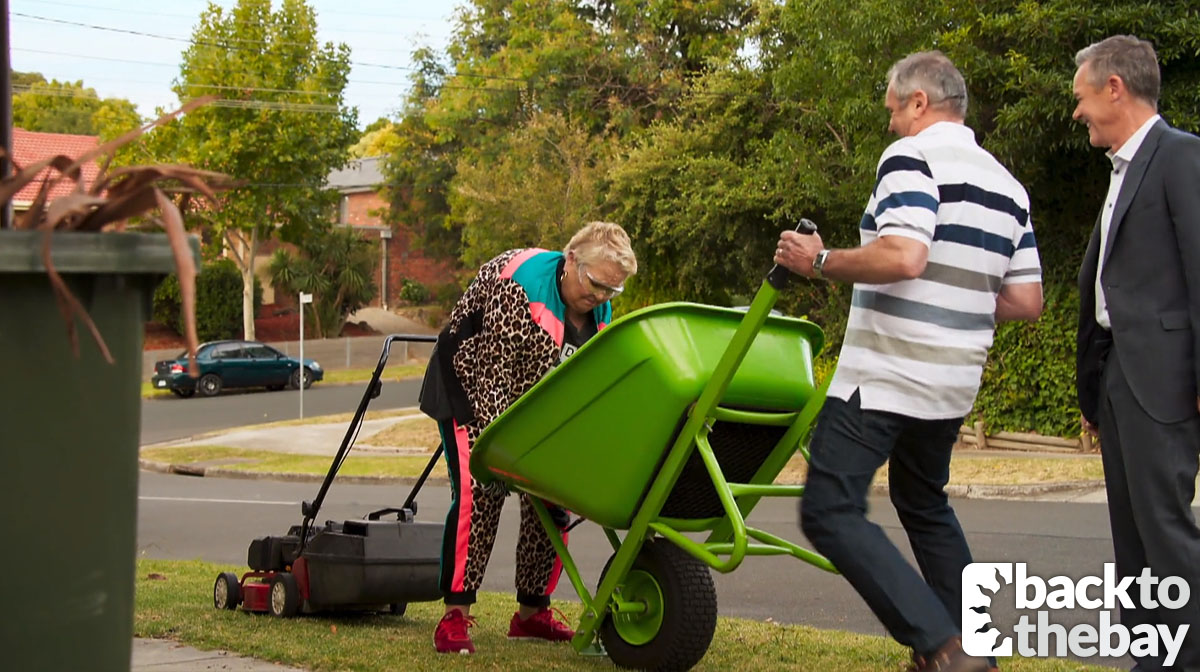 “Vera,” he says as she tends to her own lawn while listening to music through headphones. He says her name once more calmly, before his inner anger boils over.

She turns, noting the wheelbarrow full of manure. She claims to have no idea what he is talking about when he tells her he’s returning it. But, with Karl still adamant that it was Reggie who defecated on his lawn, and knowing she would surely want revenge after being squirted by his hose, he’s unable to believe she isn’t to blame.

Noticing the commotion, Paul heads over as Karl tries to dump the manure on Vera’s lawn. What ensures is a battle between the pair. 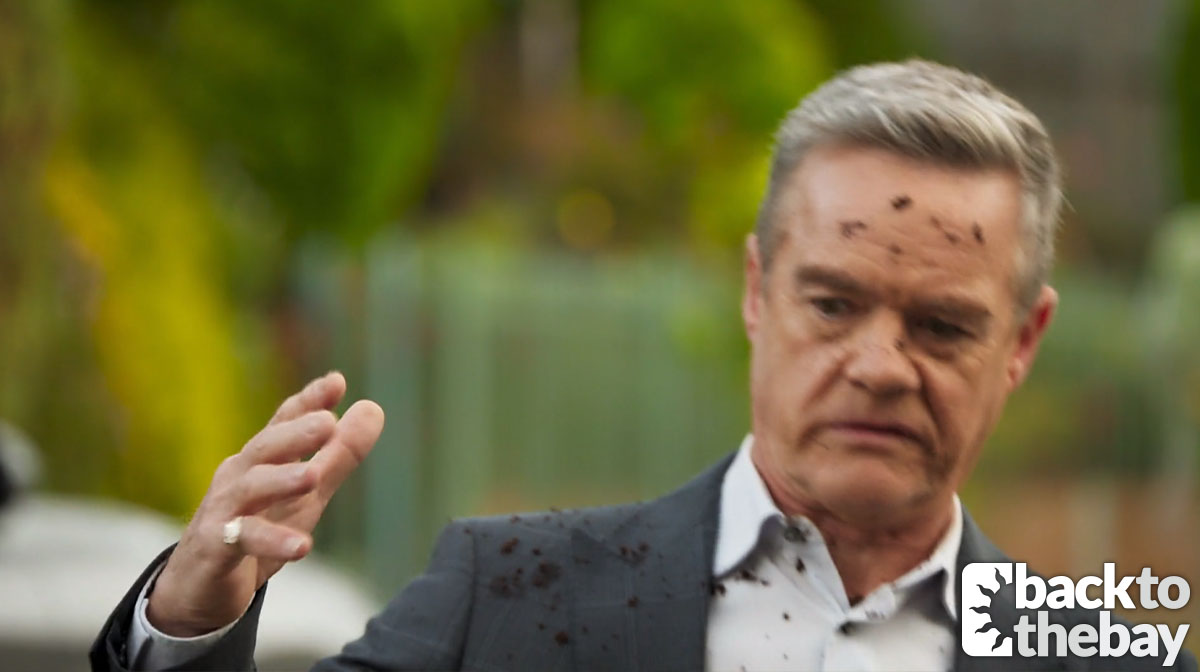 As the pair struggle with the wheelbarrow, Vera takes a handful of manure and throws it at Karl, but she misses… and instead hits Paul.

Wasting no time, Paul heads straight to Toadie’s (Ryan Moloney) house to ask two favours. The first, to have a truckload of manure dumped on the front lawn of Vera’s house, organised from Sonya’s Nursery. The second, his representation so he can begin litigation.

Taken aback, Toadie is shocked by both demands, but Melanie (Lucinda Cowden) is quick off the post with a quip. “What for? Assault with a deadly horse pat?”

Unimpressed, Paul pushes forward, adamant about what he wants. And he gets it! 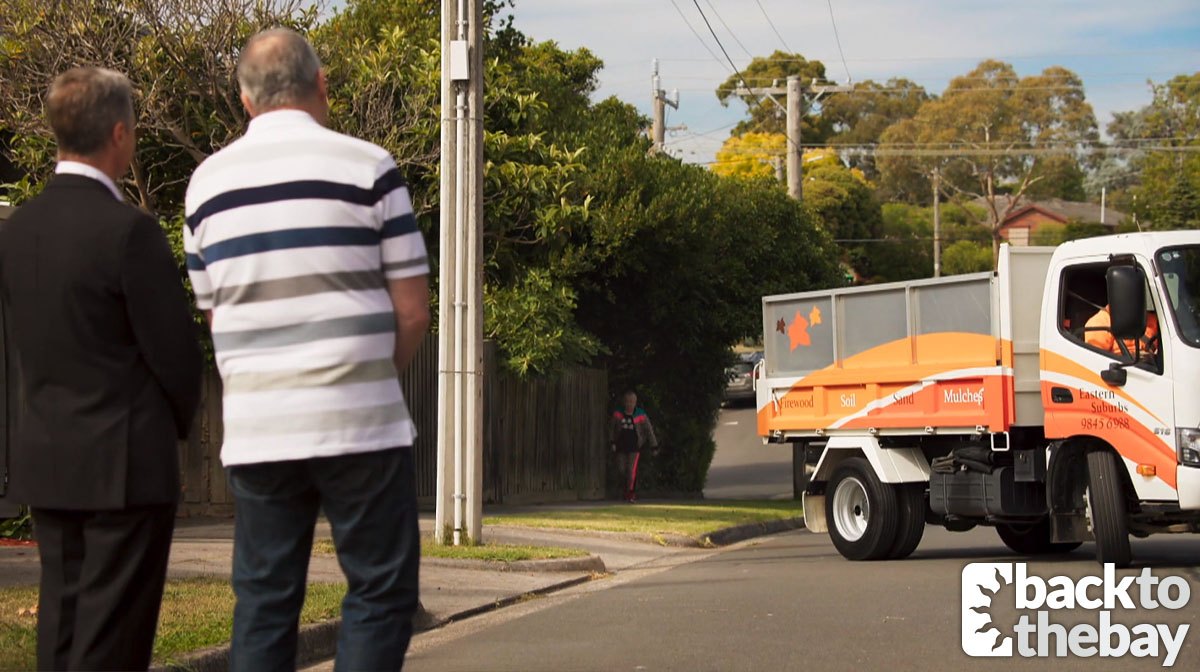 Putting their past differences aside, Karl and Paul team up. Returning home from a walk, Vera finds a large truck backing up on her front lawn, preparing to dump enough manure to fertilise all the gardens in Ramsay Street and then some. 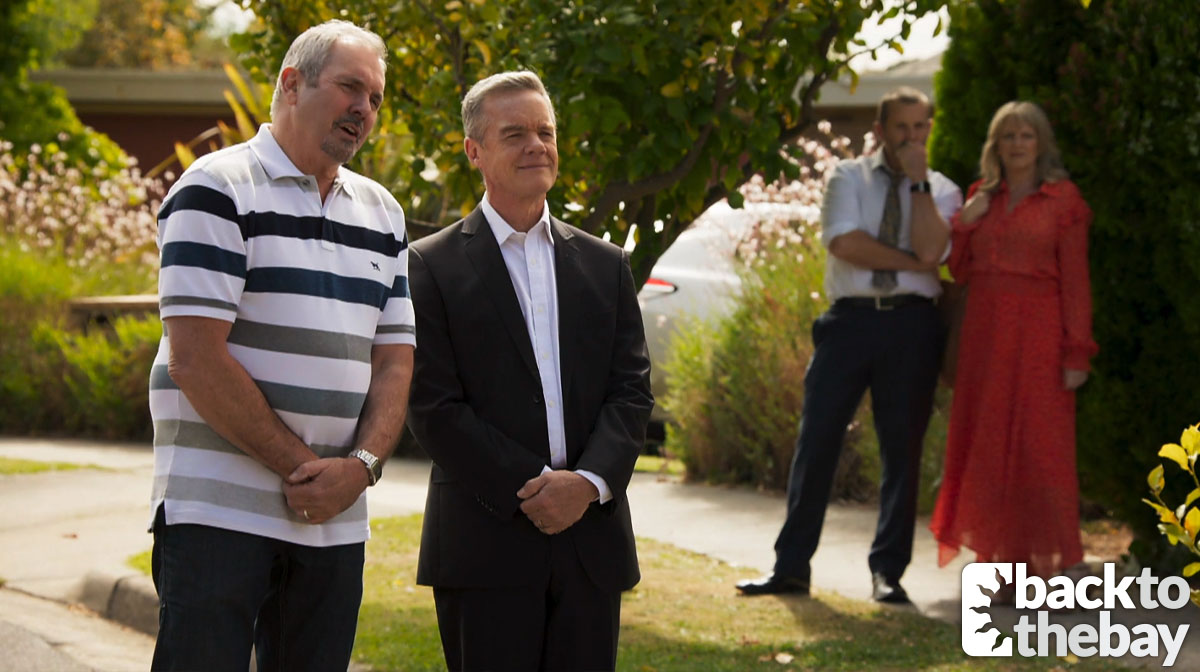 “I have gazed at the ceiling of the Sistine Chapel and seen a beam of light strike the hand of God yet somehow this is more satisfying,” Karl says to Paul, basking it the glory of the dump truck on Ramsay Street.

Vera puts a stop to the manure dump just in time, and calls the pair out. She admits that she let Reggie poo on Karl’s lawn, but she did not dump manure on Karl’s doorstep and wants the truck called off.

Toadie and Melanie have been watching the goings-on with much amusement. However, realising that all-out war is about to be unleashed upon Ramsay Street, Melanie steps forward. Unable to hide the truth any longer, she reveals she is behind the manure incident. 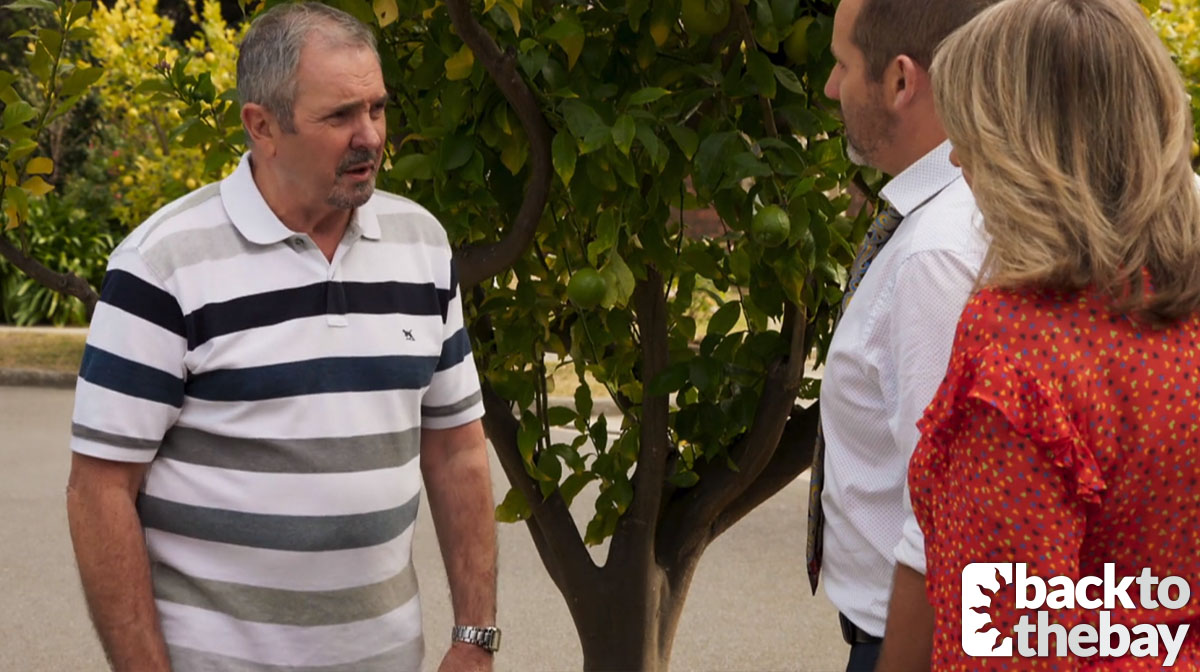 Shocked, everyone, including Toadie, listen. She put manure on Angela Lane’s (Amanda Harrison) doorstep when they thought she had Toadie kicked off the Carmelo case – her own little act of revenge.

Melanie continues, stating she believes Angela must have thought it was Karl. He did say she smelt of a horse stable after all.

Everyone is shocked by the admission, but Vera is quietly thankful that she came forward in time so the manure wasn’t dumped.

As everyone goes their separate ways, Paul gives Melanie the what for. 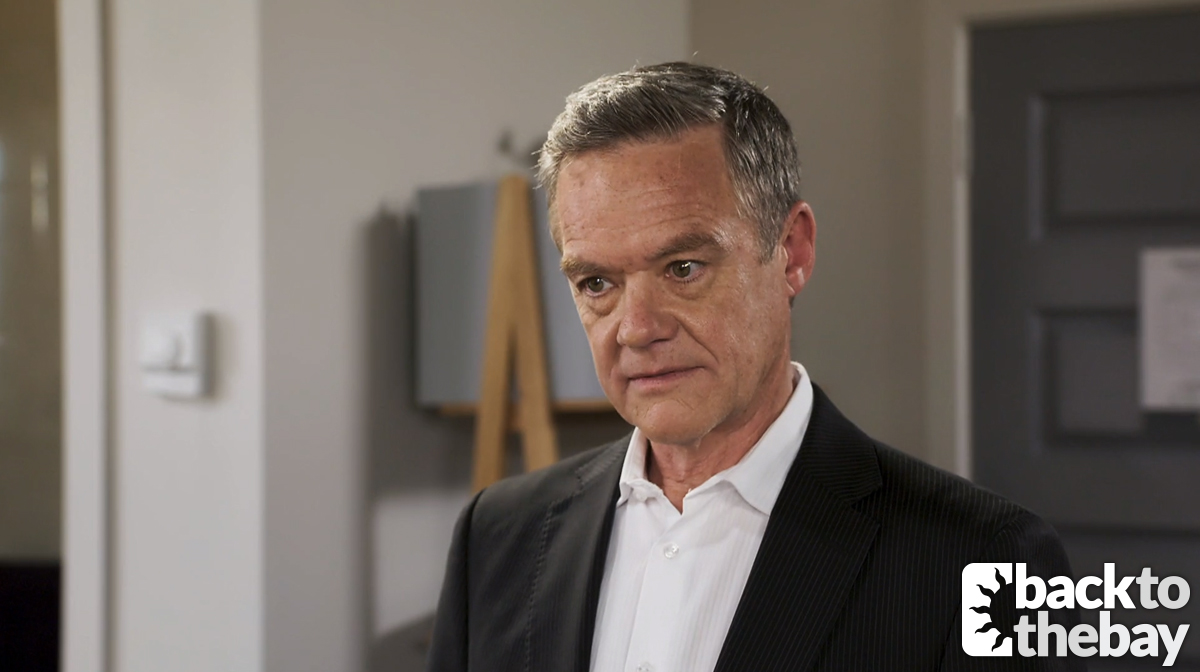 “I’ve just been left with a very expensive invoice for a truck load of manure I was forced to buy. So I expect compensation!” Paul says to his former assistant.

But things don’t end there, when Vera demands an apology. Descending into argument, Karl, Paul and Vera continue to butt heads.

Is it possible that a Ramsay Street war is slowly brewing?

Meanwhile, Hendrix (Benny Turland) and Mackenzie (Georgie Stone) are worried that being honest about their relationship will hurt Harlow (Jemma Donovan). 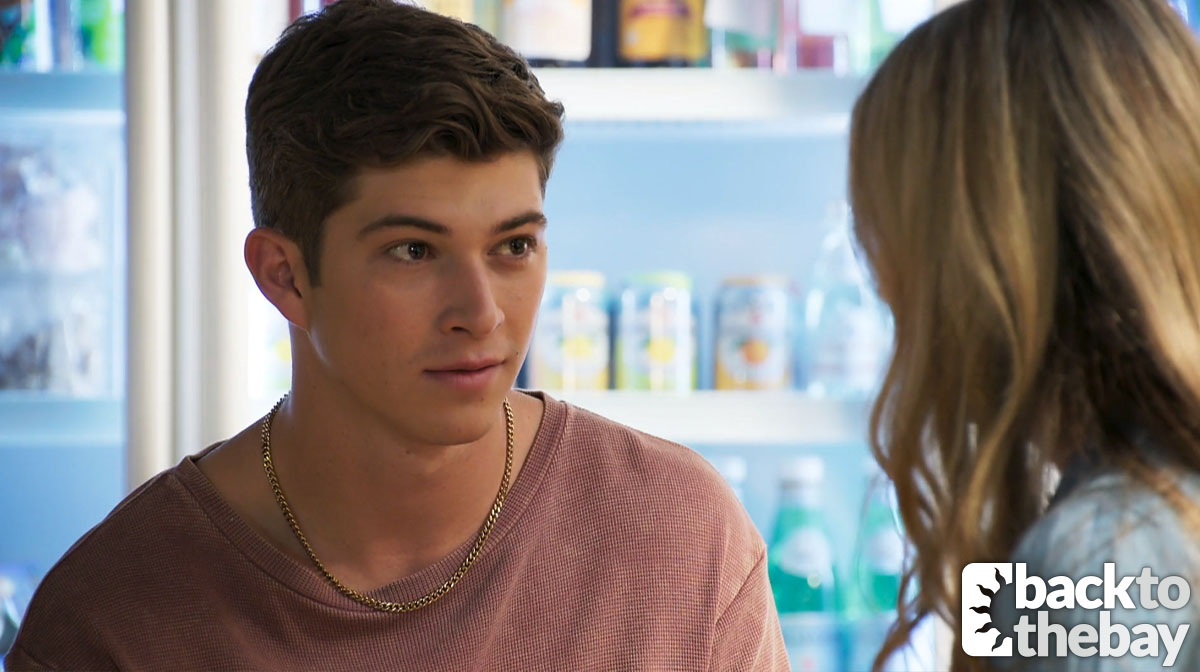 The youngest Robinson is still trying to mend her broken heart after her boyfriend Brent (Texas Watterston) left town to join the army. While sad for her, the young couple are struggling to contain their feelings for one another. Whether it be the cute nicknames or the longing glances, their feelings appear to be growing by the second. 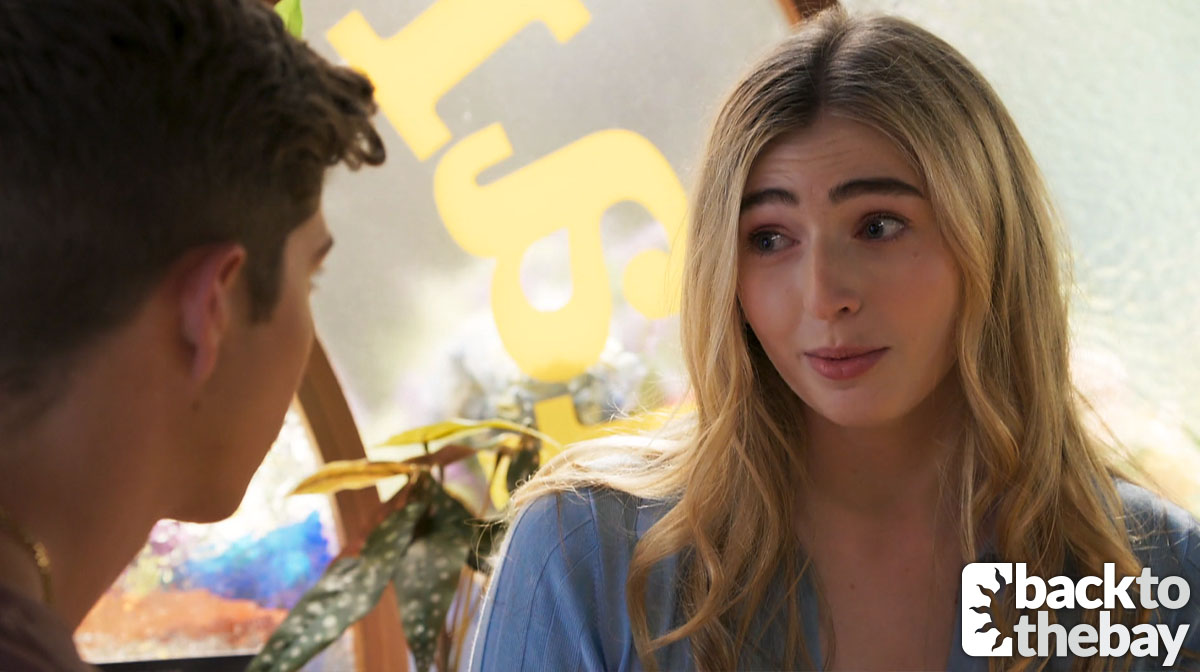 Taking full advantage of a quiet moment, Hendrix is honest with Mackenzie. “To be honest, I really want to kiss you right now,” he says.

“One can’t hurt,” Mackenzie replies, putting her hand out. 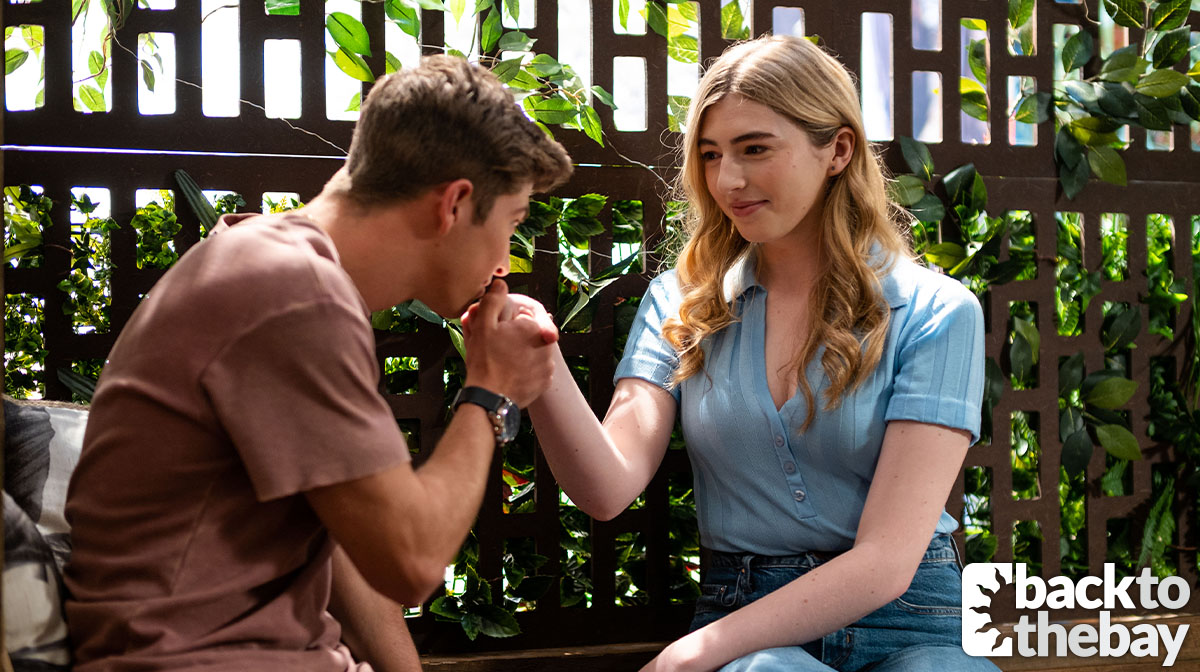 He takes it and pecks it gently. The pair look up and lock eyes. As they lean in to share their first real kiss, Harlow appears in the doorway. Realising what is going on, she quickly rushes off before the new couple can say a word.

Have the pair blown their secret before the chance to talk to their friend?