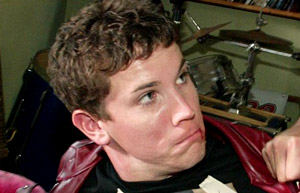 Callan was first seen when he approached Cassie in the surf club, apparently intending to chat her up. Moments later, Ric rejoined her and he and Callan instantly recognised each other: They had met while Ric was in the city, on the run after he believed he killed his father, and Ric was clearly less than pleased to see him, later admitting to Cassie that some bad things happened when he and Callan were together. Finding Ric doing well for himself in Summer Bay, Callan asked him for money as payment for helping him while he was on the run. Ric tricked Alf into giving him some cash which he then handed over to Callan and was worried when Callan showed no intention of leaving town.

Despite Ric’s efforts to get rid of him, Callan set his sights on Matilda, playing pool with her and inviting her to a concert. When Jason Pappas, a local bad boy who Matilda had gone to a party with a few days earlier, became annoyed about them hanging out and insulted her, Callan came to her defence. Ric tried to force Callan to stay away from her but Callan told him if he didn’t back off he’d tell everyone what happened in the city. Ric asked Martha, Robbie, Tasha and Kim, who were also going to the concert, to keep an eye on Matilda. However, while Martha and Kim were arguing, Matilda gave the group the slip and met up with Callan. Whilst hiding from Martha, she dropped her ticket and Callan suggested they go for a drive instead. After parking at a secluded spot, he persuaded her to take drugs with him, intending to take advantage of her in her inebriated state, but she wandered off into the bush feeling ill. Although she made it home, she then collapsed and was hospitalised.

Ric explained to Cassie and Martha that while they were in the city he saw Callan drug a girl and rape her but didn’t intervene because he was afraid of the police finding him if he made a fuss. He confronted Callan, blaming him for what happened to Matilda, and again tried to get him to leave town. Callan said he would leave if Ric gave him $300 so Ric decided to use violence instead. Martha broke up the fight and sent Ric on his way. When Callan made a suggestive comment about her, she retorted that she’d learnt how to castrate sheep and would be pleased to put the skills to use. After seeing Callan selling drugs to two surfers, Ric attempted to frame him by breaking into his car and planting drugs in it but was caught by Colleen.

Callan then went to see Matilda in hospital and managed to charm her into forgiving him. He hid under the bed when Beth came back then persuaded Matilda to go to a party with him, distracting the nurse so she could sneak out. At the party, he saved her from the attentions of the host, Hamish, but then spiked her drink. He took her into a room, intending to rape her, but Ric arrived and pulled him off her, then began to beat him. Alf, Martha, Scott and Beth dragged Ric off Callan and it was only then that they realised that Matilda had wandered out of the house semi-conscious in the confusion.

Callan was taken to hospital where he demanded that the police be called to charge Ric with assault. However, as Flynn was on the phone to them, Julie found a bottle of rohypnol in Callan’s clothes. Ric cornered Callan in his hospital bed and told him that once Matilda was found she would tell everyone what he did to her and all the other girls he had assaulted would come forward as well. Realising Ric was right, Callan quickly fled the hospital before the police arrived.