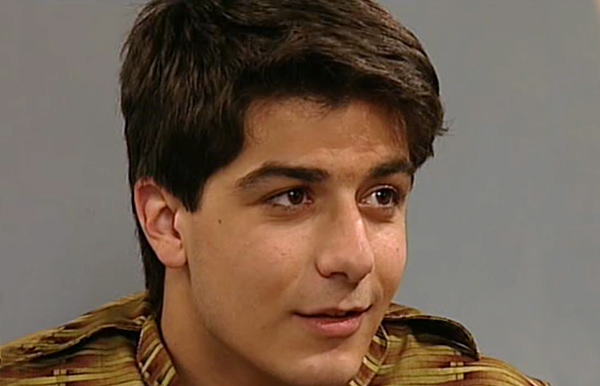 Joey popped up out of the woodwork in Summer Bay in 1996. The first images we saw of him had some kind of mystic aura though. None have ever seen him before around so it was a sort of thrill to get to learn more about his identity.

As it turned out that Joey was virtually the son of Saul Bennett, the local sect-guru who abducted Selina some time ago before Joey appeared on the scene.

Being aware of the fact everybody was full of angst that Joey could be sort of vanguard being charged to make Selina return to the commune led by Saul.

But Joey made it all clear. He actually left the “safe shelter” of his father’s commune to learn about the world outside, to attend school and so on,

Joey was confronted with meat at the diner for the first time of his “protected” life and found it disgusting in the first place.

Joey was lucky to find shelter at Irene’s place and to be accepted at Fisher’s school although problems had to be solved first. One of the major problems was Joey being unaware about his last name, which turned out to be Rainbow!

Thus somewhere over the rainbow, not only did he have a new family to live with, he also fell in love with Casey who ignored his advances from the very first moment.

Joey was a warmhearted person right from the start and made quick steps towards the opening credits in no time. He bluffed everyone at school with his ingenious knowledge, despite never having attended school before. He simply seemed to be able to recite everything by heart thus the idea came up that Joey could take part in a sort of radio competition, which he won and became the local hero at school.

Joey was always the if-ya-are-in-trouble-turn-to-me-type and when Tiegan turned up in Summer Bay, he seemed to have found the love of his life. Unfortunately for Joey, she was sent to the Farrell family after a minor stay at Pippa’s and Joey was left to his own devices again.

The bravest deed Joey’s ever done in my opinion was that Joey decided to “return” to the commune as Saul returned to the Bay in early 1997 after having conspired with Wendy’s husband to abduct little Paul to the commune. Irene couldn’t stand this ordeal anymore so Joey headed without saying a word for the commune. He was that close to convince his father of his reversion as Casey popped up at the commune, too. Meanwhile, Saul won a point on convincing Selina to follow him to the commune again. Joey tried to make the communards see the truth and was kicked to ground by his father. In brevity, Saul found out what everyone was up too and by sort of delude, he managed to lock up Casey, Liam and even his own son in this moist shed and set the place on fire.

Joey happened to be eyewitness of the burn to death of his father, which might have been a traumatised experience for poor Joey while trying to get Selina out of this smoke-filled shed. Saul didn’t actually die but returned in order to prevent Selina from marrying Steven.

Casey seemed to show more affection towards Joey but this backfired.

Joey made her understand that he wasn’t interested in her fake affiliation at all.

Some time later, Tiegan came back to Pippa’s and seemed to fan the flame of love again. The love between Joey and Tiegan re-rose like phoenix from the ashes. But this love was set on to severe tests more than one time.

Tiegan had left him for a rock singer, Colt, then came back to him – Joey got sick and Tiegan left Summer Bay.

In late 1998 Joey’s behaviour turned into sort of moody even aggressive and threatening. Tiegan was told to be an evil slut for only showing him that she really cared. She told him to restrain from taking drugs but without any result though!

Joey’s personality deteriorated from strange to mad. He really started giving a hard time to Irene and her foster kids. Nobody knew what was going on, thus he was said to have become a dope addict though.

Joey returned home late at night being untypical as for his habits though. He even had been missing for several days being said to be a rebellious teen. Irene, being full of anxiety tried to keep on an even keel but failed to do so.

Joey returned with weird looking Kaia in to. Joey freaked out right of the blue and Kaia got hold of him standing on a cliff top. After having told Irene and Kaia of his discovery of him being a Superman, both got even more frightened.

Summer Bay’s most dependable person had nearly completely transformed into a madman. Remember, Joey had always been the sweet, nice kind of guy and all of sudden he was smoking marijuana. First signs of the deterioration of his health was when Aaron found Joey running riot in his tent.

One day Joey was tempted to his computer monitor due to the voice of his father, Saul, telling him that Irene was against them and that he had to get rid of them. His illness made him believe that his father and he would be reunited again,

After Kaia had left him for good, Joey tried to suffocate Irene with means of a cushion but was stopped by James and Chloe in the very last second.

Joey also stings a picture of Hayley into bits and pieces. Joey finally gave in and was taken to a mental hospital voluntarily and was undergoing a treatment for schizophrenia.

After being released from the latter, Joey fell in love with Miranda, the AIDS-infected daughter of Fisher’s nanny Ellen Porter. But the new relationship suffered a setback when Miranda freaked out after cutting herself for she was frightened that she could be found out!

Though the Boards of Studies made it clear that Joey was eligible for uni, Joey made up his mind to travel round Australia giving enlightenment in schools on mental illness. No one wanted him to leave after having recovered but Joey seemed to be unstoppable.

Joey left Summer Bay in May 1999 and I think everybody’s gonna shed a tear while watching his farewell from Summer Bay.