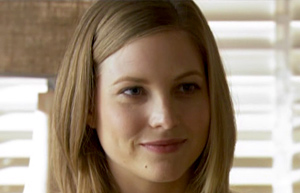 The real Shandi Palmer was first seen when the police were looking into the murder of Penn Graham. She was asked by the police in Newcastle to accompany them to Yabbie Creek police station for questioning in relation to Penn’s murder. When she arrives, Sgt. Buckton asks her for her ID as she didn’t recognise her as the ‘Shandi’ they wanted to question, but her ID proves that she is the real Shandi.

She reveals to the police that the ‘Shandi’ they were looking for is actually called Daria Hennessey, a girl she had grown up with and was extremely close to for most of her childhood and teenage years. In response to being asked why Daria would want to impersonate her, Shandi says that if there was a chance for her to get her hands on cash, Daria would be there. According to Shandi, Daria had never worked a day in her life and was a true con artist. Shandi had nothing to do with Daria’s plan of extortion and was shocked to learn that Daria had used her estranged father, John Palmer, to get money. Once John and Gina find out that ‘Shandi’ is in fact, not John’s daughter, Gina arranges for the real Shandi to visit which comes as a shock to John when he arrives home with the shopping.

Shandi tells John that she probably wouldn’t have got in touch had it not been for the situation with Daria, but she’s glad she had the chance to meet him. However, she decides not to stay in touch with John – the reason for this being that her mum remarried when she was a baby and since she died, she doesn’t think it would be fair to form a relationship with John when her mum’s new partner, for all intents and purposes, had been her dad all her life.