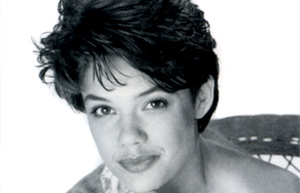 Roxanne (Roxy) is Blake & Karen Dean’s half sister. Her father, Les Bagley, was briefly married to her mother Carol over 20 years ago. Les didn’t enjoy being tied down, and split soon after Roxy’s birth. Carol couldn’t cope with being a single mum, and gave her baby daughter up for adoption before returning to her family in the UK.

Roxy was adopted by a loving couple in their mid-30s, Pauline and David Miller. They lavished attention on their new daughter, and she has grown into an attractive, well-balanced woman, with a feisty independent nature and a strong artistic streak. Her hobbies are varied – jogging, sketching, reading copiously, but her passion is sculpture. She can turn a lump of clay into a work of art, or cast a piece of plaster into a lifelike form. She works at a city cafe as a waitress, not only to pay the bills, but because she likes the offbeat style and clientele. She attends art classes in the evening, and is collecting life experiences for the novel she’ll get around to writing one day.

Roxy always knew she was adopted, and when she was 18, her natural curiosity became too much, and she moved to Adelaide to ‘The City’, where she began the search for her natural parents. Her mother proved untraceable, having returned to the UK, but she managed to track down details of her father, Les. But Les put a stop on any contact with his daughter, and Roxy was so hurt, she hasn’t pursued the matter any further. She managed to convince herself she doesn’t need to know Les; she has wonderful parents already.

She’s become so enamoured of her lifestyle in the city though that she’s not in any hurry to return to Adelaide, but she keeps up regular contact with Pauline and David.

She moved to the Bay to the Stewarts’, and taught at Summer Bay High. She fell in love with Luke, and later James, who were both teachers, and also Rob, a handyman, but all relationships failed. She was diagnosed with breast cancer and later left for Greece.