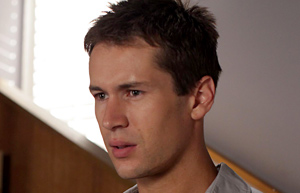 Justin was first mentioned in 2008, when Larry mentioned to Rachel that Justin had made a comment about his grandfather abusing him when he left home. He wouldn’t be seen until two years later, when Marilyn, returning to Summer Bay herself, found a young man covered in blood staggering by the roadside. He was unable to remember what had happened, although signs were he had been in a car accident, or if anyone had been with him. Marilyn took him to hospital where he remembered he was called Justin Jefferies and told Nurse Julie that his brother Aden lived in the area.

Aden came to the hospital where he and Justin had an awkward but friendly reunion. Justin explained that he was now in the army and thought he must have been coming to Summer Bay to see Aden, although his memory was still hazy. Rachel realised that much of the blood on Justin’s shirt wasn’t his own. Georgie found Justin’s car with blood on the passenger side and suspected Justin couldn’t have got out of it unaided, meaning someone must have been with him.

Aden took Justin home and introduced him to Nicole. Justin asked Marilyn if Aden and Nicole were serious and, even though she told him they were there, he encouraged Aden to join him in the army, saying it had turned his life around and could do the same for him. He was dismissive when Aden brought up Larry, who was serving time in jail for causing the car accident that had killed Axel Hay, saying he had no interest in getting in touch with him. He admitted to Aden that he had been abused and had told Larry thinking he would put a stop to it. Aden was furious that Justin hadn’t done more to stop the same thing happening to him, taking his frustration out on a punchbag in the gym and warning Justin to stay away from him for a bit.

Justin suspected Nicole was hiding something from Aden but when she admitted that her mentor Britt Hobart had stolen some of her designs both Aden and Justin encouraged her to stand up for herself. Justin was rocked when Rachel told him that the blood on his shirt was Larry’s. Aden put her off telling the police, lying that he’d spoken to Larry since the crash, but when he checked he found that Larry had been released on parole and Justin had picked him up. Justin and Aden checked the crash site and found Larry dead nearby. Justin wanted to call the police but Aden convinced him they should bury the body.

Charlie and Angelo soon brought the brothers in for questioning when Larry’s disappearance was noted. Justin claimed he’d dropped Larry off at a pub and hadn’t seen him since but was starting to panic and Aden had to talk him out of returning to his unit. When she found out about the blood, Charlie took the two brothers along to the crash site to try and jog Justin’s memory and just missed seeing the shallow grave. A stop sign nearby triggered a memory and Justin privately told Aden that he remembered seeing Larry injured. He believed that Larry had told him about Aden being abused and he had killed him as a result.

Justin went to see Nicole and told her that he felt Aden was in a rut, doing menial jobs he didn’t enjoy and wasting his life, and told her to try and convince him to join the army if anything happened to Justin. Justin then went to the police and told Charlie about his flashback, telling her he believed he’d killed Larry. Charlie didn’t think it was enough evidence to charge him and decided to search the crash site again. Aden was furious, since if the grave was found they’d both be implicated, and convinced Justin to help him move the body. They were unable to find the grave in the night and had to wait until morning. They were still carrying the body back to the car when Charlie and Georgie arrived. Charlie rang Justin’s phone and heard it ringing nearby and the car being driven off. After abandoning the car with Larry’s body inside it, the brothers claimed it had been stolen.

With the brothers’ story falling apart, Justin again tried to convince Nicole of his views on Aden’s life but was interrupted by Angelo: Aden had gone to the police and claimed he hid the body alone. The brothers were questioned but both denied murder. Nicole got in touch with Morag and arranged bail for them while Justin felt they should confess everything, convinced he had killed Larry and belonged in jail. He started having flashes of hearing a phone ringing. Charlie told them they’d both be charged with conspiracy to murder but then Justin remembered Larry leaving a phone message for Aden. Nicole retrieved Aden’s phone, which was being repaired, and they played back the message where Larry said he and Justin had talked and sorted things out and were on their way to see Aden when a kangaroo rushed out in front of their car, causing Justin to swerve and hit a tree. Despite being badly injured, Larry had managed to get Justin out of the car, before succumbing to his injuries. With the murder charge dropped, the trio returned home where Justin collapsed in tears of relief that he hadn’t killed Larry.

The DPP elected not to charge the brothers for covering up Larry’s death after Morag explained the family history. Justin told a despondent Aden that he’d saved him and tried to convince him he’d do well in the army. He accused Nicole of holding him back but Nicole retorted she had supported Aden during Belle’s death and his other recent troubles when Justin had been nowhere. Justin apologised but maintained Aden wasn’t happy and tried to persuade Aden to come to the city with him even if he didn’t join up. Shaken by Justin’s words, Nicole broke up with Aden. Justin told Aden to forget her and the brothers left town together.