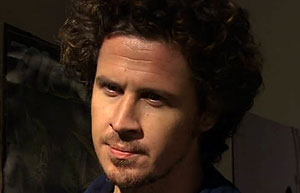 Sean was Aden’s older brother. He was the only family member seen or mentioned when Aden was hospitalised after a clash with Ric during rugby training. When he encountered Ric at the hospital, he angrily accused him of deliberately injuring Aden because he was jealous that Aden was a better player than him, especially since the accident left Aden with a concussion which meant he missed an important game. He later turned up at the caravan park to confront Ric again. That night, while Ric was walking home from a school play at the surf club, Sean ambushed him and gave him a serious beating, leaving him lying barely conscious.

Sean then went to the hospital where he found Flynn and Cassie with Aden. Flynn noticed the damage to Sean’s knuckles which he claimed was the result of an accident at the building site where he worked. When Ric was brought into hospital, he identified Sean as his attacker but Sean claimed he had been at the hospital with Aden all night and Aden backed him up. Later, Flynn went round Sean’s place to quiz him about his injuries but Sean stuck to his story. He went back to the hospital where he found Cassie with Aden and bluntly told her to let him talk to him in private. Aden told Cassie to leave, annoying her, but when he and Sean were alone he expressed his doubts about lying to the police. Sean insisted he couldn’t go back to jail. As he was leaving the room, he ran into Jack, who again questioned him about the assault. Sean kept his calm and said Jack was only pestering him because Ric was his friend but after Jack was gone Cassie saw him punching the air in anger.

Ric then went round Sean’s house and tried to get him to admit to the assault. Flynn followed him and claimed they had a witness to the attack, prompting Sean to drag them both into the house and effectively hold them hostage, threatening them with a baseball bat. Ric managed to make a call to the police while Sean was distracted then Flynn attempted to jump him. He seemed to be coming off second best in the struggle when Jack and Ken Harper arrived and arrested Sean.