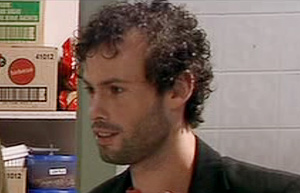 An attendee of a party Cam and Martha were holding in the flat above the Diner, Todd, who wore a red shirt with a black jacket and carried a bottle of alcohol, came with two other party goers through the Diner and to the stairs via the Diner’s kitchen. They were stopped by Colleen who told them to use the outside steps instead of traipsing through the kitchen. Todd explained that he was told by Cam that that was the way in, but Colleen got angry at the three and told them that it was kitchen and not a nightclub. After Todd told Colleen that she shouldn’t get her knickers in a twist, Cam intervened and told them to go upstairs to the party.