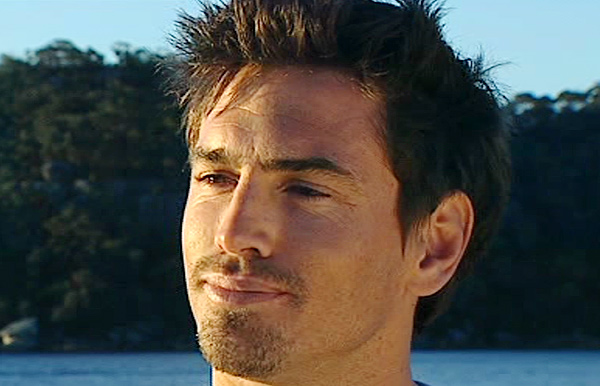 First seen driving into Summer Bay, Harry quickly got Shauna offside by drenching her when he drove through a puddle. It was soon revealed that his name was Harry Keller and that he was the new science teacher. When he met Joel for the first time, he was uncomfortable around the police uniform. He hadn’t been in town two days when he was approached by a suited man, who stated he was around for Harry’s own good. Before long, he moved in with James and Shauna. He quickly made his presence known in town, by getting a part-time job as a seaplane pilot. However, when Alf discovered Duncan with a lot of money, and saw Harry talking to a man holding a gun, he thought Harry was heading a drug ring at the school.

Alf asked Joel to look into Harry’s history, but Carter ordered Joel to stop, leaving Alf suspicious of him. After a few weeks as her teacher, Hayley began to develop a crush on Harry. Realising she had feelings for him, Harry was forced to let her down gently. He began to develop a close friendship with Sally, whom was in a relationship with Vinnie. Vinnie began to see Harry as a potential love rival, but he was unphased by this. His mysterious meetings continued, and he was urged to not pursue a relationship whilst in the Bay. After being caught in a downpour with Shauna, he ran away just as it seemed the pair would share a kiss.

He was forced to take some time off work and told everyone that he was going to look after his ailing mother in Perth. It was clear that he was hiding something, and when Shauna learnt, he was going to Los Angeles, she and James grew suspicious. When Edward went missing at sea, Harry and Shauna went up in a seaplane to find him. However, they experienced engine trouble, and he was forced to make an emergency landing. He realised that the fuel tank had been tampered with and that his whereabouts had been uncovered. His case worker Les came to collect him for his trip to the US, but he absconded with Les’ car, determined to tell Shauna the truth.

Harry divulged all to Shauna: he was a research scientist named Harry Reynolds. When in the US, he worked for a pharmaceutical company, and uncovered that they were hiding the truth about a drug they were manufacturing. When he couldn’t keep quiet any longer, he was threatened by the company. He was put into the witness protection program and shipped back to Australia until it was time for him to testify in the trial. Unfortunately, the company had sent a hitman Christian to get rid of Harry and he caught him with Shauna in Les’ car. Armed with a gun, Christian forced Harry to drive himself and Shauna to the bush, where he planned to make them jump off a cliff to look like a pair of lovers suiciding to be together. They were able to fight him off and return to Les. Harry went to the States to appear as a witness for the prosecution and was freed to go on as Harry Reynolds following his testimony.

Upon his return to Australia, it was discovered that he had a fiancé. Forced to reveal the truth to Shauna, he explained that he left her after going into protection and he had heard she’d moved on. She tracked Harry down and contacted him, stating that she was coming to Australia. Her arrival tested his relationship with Shauna. Not only did he not reveal their true relationship to her, but he also shared a kiss with her. When Alison learnt she had to go back to the States, she asked Harry to join her, and Shauna ended things with him. On the way to the airport, Harry had a change of mind and returned to Shauna. Their relationship endured a small hiccough when Harry paid her credit card bill without telling her.

A few weeks later, Harry was accused of kissing a student, Claire Rogers, due to her bragging about it. Although she revealed that it never happened, and he was cleared, Harry began to question whether he wanted to truly be a teacher. He decided to see the year out. He attempted to help Shauna get over her cynophobia by buying her a puppy. The pair encountered their next rift when Harry purchased Will’s motorcycle. Shauna berated him, before revealing her cousin Nick was killed after being hit by a car on a motorcycle. Harry was told to pick between Shauna and the bike, however after seeing the impact Gypsy’s accident had on her family, he sold the bike back to Ken.

Following a conversation surrounding marriage, Harry admitted that he was planning to propose to Shauna. This caused a ruction between the couple as she denounced the idea of getting married. He was heartbroken when she decided to end their relationship and move into the spare room. However, when it became obvious that their friendship was suffering, Harry moved into the Caravan Park. Not long after, Fisher offered up his spare room and Harry accepted. Always the battler for what’s right, Harry threw his support behind Mitch’s bid for a drop-in centre in Summer Bay. He battled the council and was able to secure a derelict property as the site. Following Shauna’s learning Ailsa was her mother, she and Harry reconciled and made plans to leave the Bay. Shauna eventually decided to stay and they cancelled their plans and ended their relationship.

Harry moved in with Fisher, and slowly found himself becoming friendly with Shauna again but the pair decided to take it slowly. His mother June got news that her book was being published and she came to Summer Bay for a visit. Harry’s relationship with Shauna ended not long after as he begin to look for a new career. Unfortunately, the local seaplane pilot decided to sell the business, leaving Harry with no prospect of becoming a pilot in the Bay. With his last day of teaching looming, Harry continually found himself growing further uncomfortable around Shauna, despite attempts to smooth things out.

Despite Joel’s disapproval, Harry found himself growing close to Gypsy. The pair shared a kiss but decided to just stay friends. After initially being rejected, Joel eventually gave the tick of approval for him to move in with Gypsy and Vinnie. Harry and Gypsy began pursuing a relationship, but a stalker began taunting Gypsy, firstly telling her that Harry had been killed in a plane crash. When he turned up alive, it became clear that someone was harassing Gypsy. Some weeks passed and Joel caught Harry with a topless woman, who was revealed to be the stalker. Despite a rocky patch, Gypsy and Harry found themselves happy once again, but when a grieving Shauna sought comfort, Harry was the person she turned to. After a coincidental holiday, where Shauna and Harry went away at the same time, Gypsy became jealous. Harry admitted his feelings to Shauna and Leah overheard the truth. Not long after, Harry broke up with Gypsy. She later trashed his van and bike.

Whilst on a downward spiral after his mother returned, Harry was rejected by Shauna. After a heated confrontation with Sally over fidelity, Harry kissed her. Harry continued to pine for Shauna, however she had moved on with Jude. When June returned and offered him a job at her resort in the Whitsundays, he was undecided, but she managed to talk him around. Before leaving, Harry agreed to help Vinnie propose to Leah: by flying a banner over town reading “Will you marry me, Leah?”. A few days later, Harry said goodbye to Leah, Vinnie and Fisher and left Summer Bay in his seaplane with his nervous mother in the passenger seat.