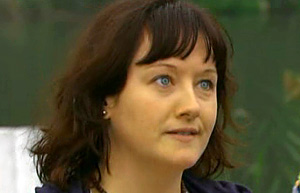 Bronwyn was the partner of Shane Deeks, Kylie/Sam’s ex-husband. She came to the Bay to help Shane take Rory away from Sam. As part of the plan to abduct Rory, Bron dressed up as a Lifeguard and asked Rory to give her hand to carry some equipment to her van. When Rory climbed into the van she locked him in then drove off at speed.

The police later located the van at the old ferry wharf. Shane took off in the van and Bron sped off in a boat. Jack and Fitzy chased after Shane which resulted in him crashing the van. Jack returned to the wharf to look for Rory, by which time Bron has been arrested by the Water Police. Jack questioned Bron about where Rory was but she denied knowing Shane or Rory. Jack and McGrath then told her Shane was dead and that she was accountable for whatever happened to Rory. She told them she didn’t know where Rory was as he must have jumped overboard. Jack eventually found Rory safe and well on the riverbank.