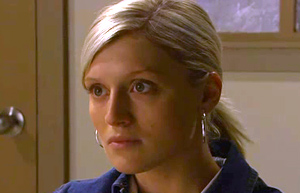 Tanya was an old girlfriend of Robbo Cruze who had ended up in hospital after he assaulted her. After getting her details from Rachel, Charlie asked Tanya down to the station and told her about Robbo raping Joey. Tanya agreed to make a statement saying Robbo had raped her as well but, after Charlie had arrested Robbo, Georgie told her that Tanya had left the station without signing her statement.

Tanya tried to take out an AVO against Robbo but Charlie, who was distracted by her feelings for Joey, misunderstood when Constable Hogan gave her the paperwork and failed to act on it. Soon after, Tanya was run over by Robbo in a hit and run incident. She was left in a coma and it was never revealed whether or not she recovered.