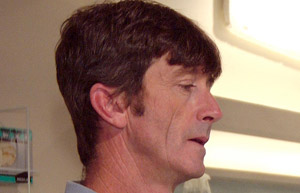 Came to Summer Bay after his mother had suffered a stroke and came to discuss with Sally, whether or not they should turn the life support machines off. Cassie was always jumpy around him and kept on having flashbacks to her childhood which included Ben and it became known that Ben had abused Cassie when she was younger.

After Ben’s sister, Pauline came, they decided to turn of Joy’s life support machine. After Pauline went into see her mother for the last time, Ben called Carla, Pauline’s daughter, “Angel” and Cassie realised that Ben had been abusing Carla now and so she decided to report him to the police where he was taken in for questioning despite prtesting his innocence. He was then however never heard from again.