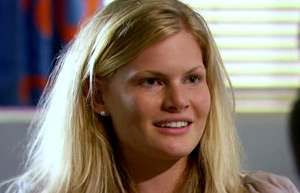 Hayley arrived at the hospital after going into premature labour three weeks before she was due and was worried that her husband, who was away, wouldn’t make the birth. Sid requested a midwife for her and the delivery seemingly went well but afterwards she began convulsing and haemorrhaging. She was looked after by Sid and Rachel along with nurses Maria and Veronica but was suffering from a severe postpartum bleed which they were unable to control. Apparently realising she wouldn’t make it, Hayley asked to see her newborn son. As she became delirious, she believed Sid to be her husband. Sid played along with the mistake, telling her he loved her and would look after their baby, and allowed her to die peacefully. Sid’s actions earned him the respect of the nursing team, who had previously stated they were unwilling to work with him following his brief fling with Nurse Therese.