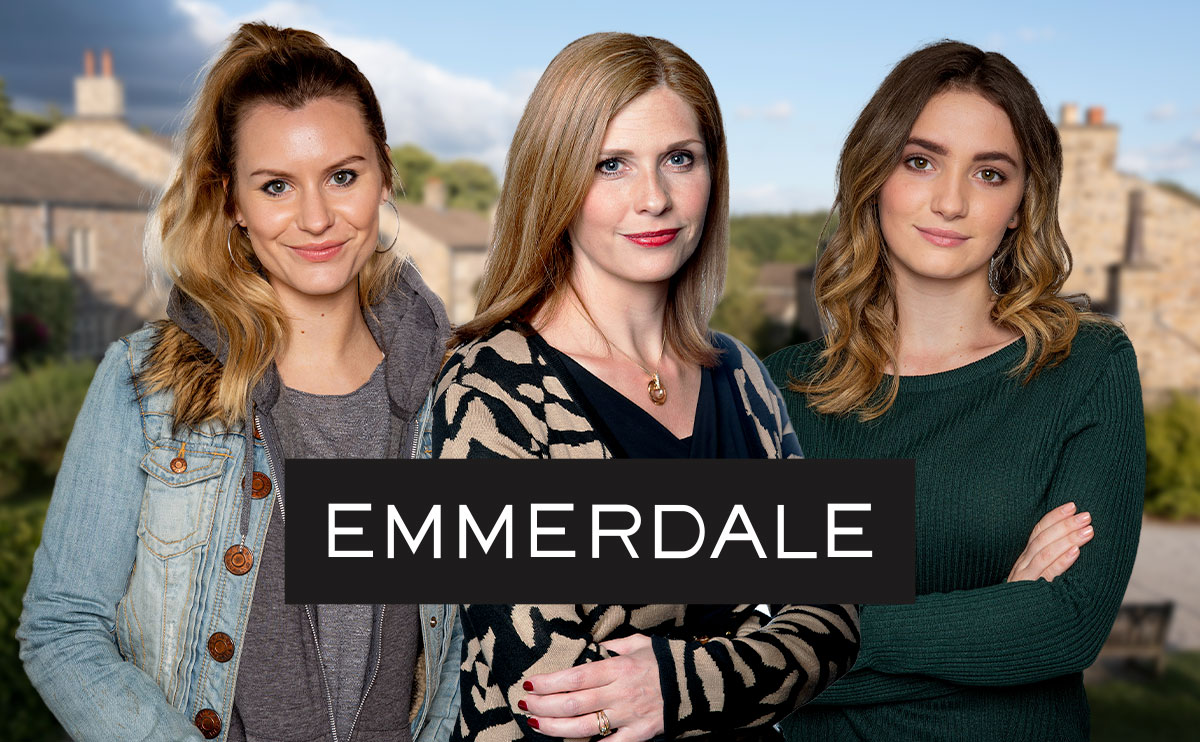 Coming up next week on Emmerdale, Gabby and Dawn battle for the job on the stud farm, Vinnie’s gambling concerns Mandy, and Bernice continues to struggle with her emotions after her diagnosis.

After impressing Kim (Claire King) with her initiative, Gabby (Rosie Bentham) was pleased to be offered a job at the planned stud farm on the estate… but she wasn’t banking on having a rival for the position! 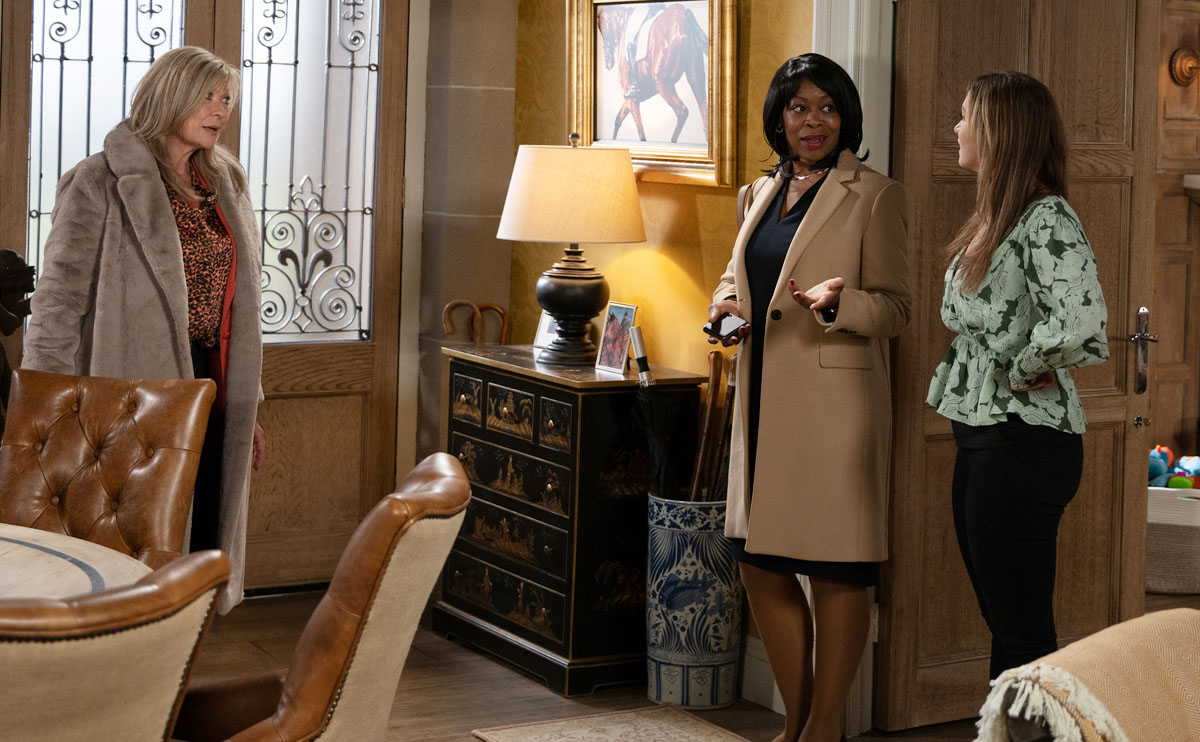 Determined to show Kim she’s up for the challenge, Gabby is raring to go when Kim puts her forward for a meeting with Darren (former Home and Away and Hollyoaks star Kyle Pryor), who they could potentially be working with on the stud farm.

When Gabby makes an embarrassing mistake however, it’s Dawn that steps up and impresses Kim. Feeling that Dawn should be living up to her obvious potential, Kim offers her a job-share with an irritated Gabby, and even offers to organise childcare when Dawn expresses her hesitations. 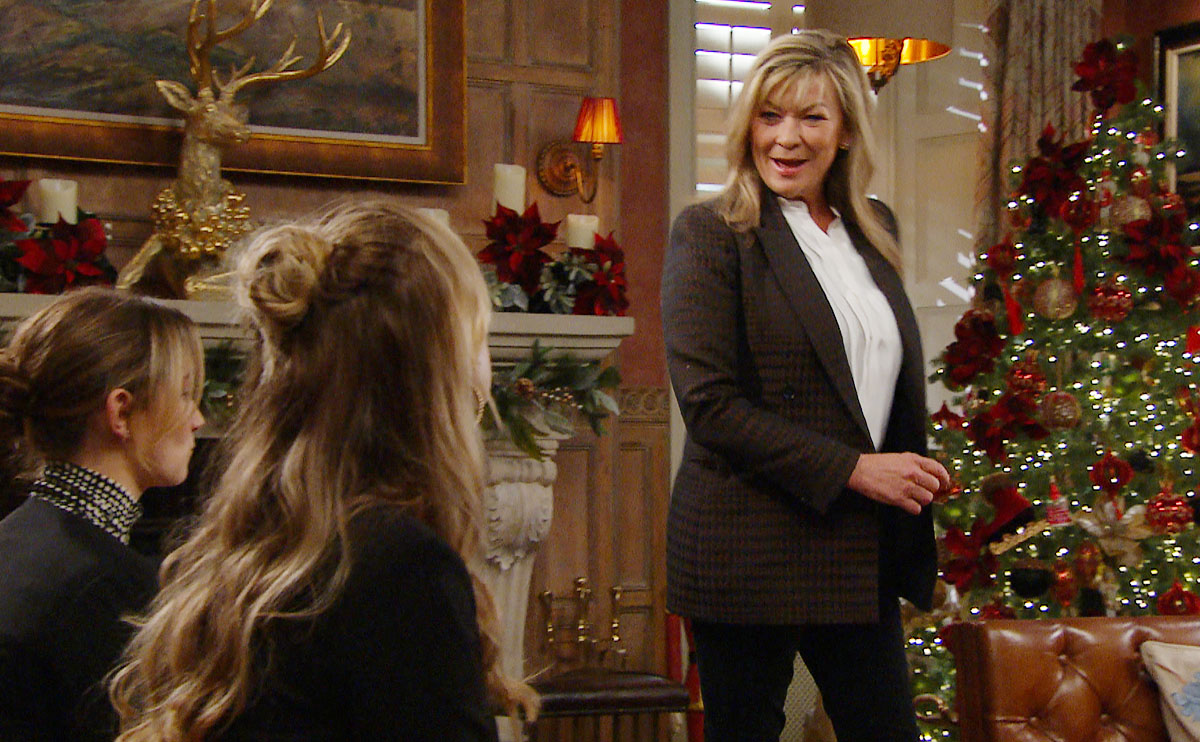 Having recently bought Jamie’s shares in the vets from Kim, on the condition that Kim receive a 15% discount on any vet bills herself, Rhona is fuming when she learns of the stud farm plans. No wonder Kim was so eager to have that caveat in the contract!

Nevertheless, Rhona encourages Dawn to go for the position, reminding her of how invaluable she has been at the vets—it’s too good an opportunity to miss.

However, at the same time, Gabby is doing her best to put Kim off hiring Dawn, expressing concerns about her abilities. 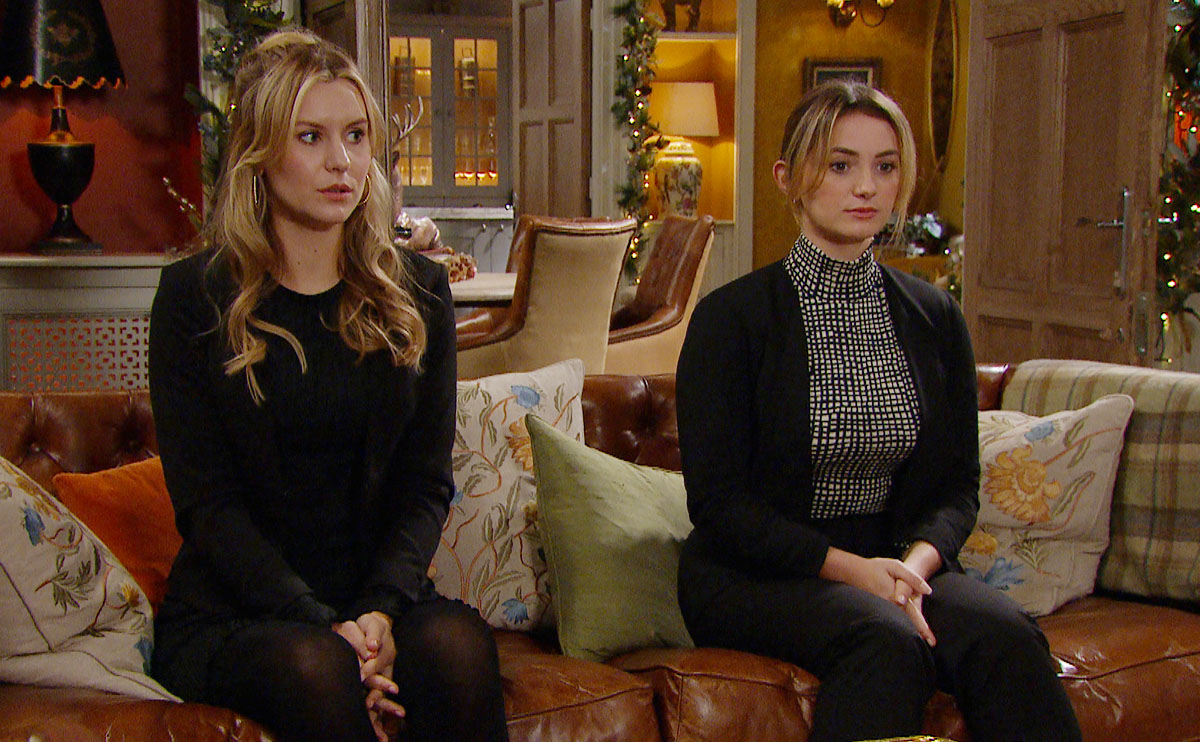 Kim can see only one way to go forward—both Gabby and Dawn can shadow her for a few months, and the best will win the job. Let the challenge commence! 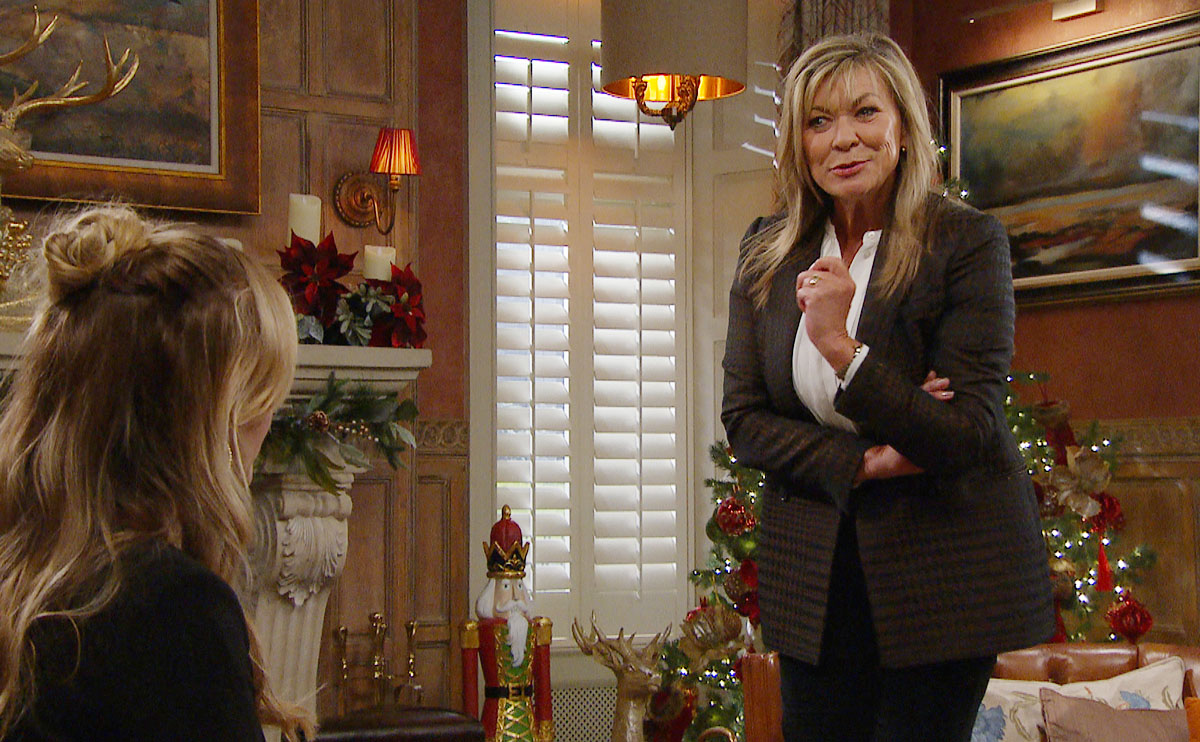 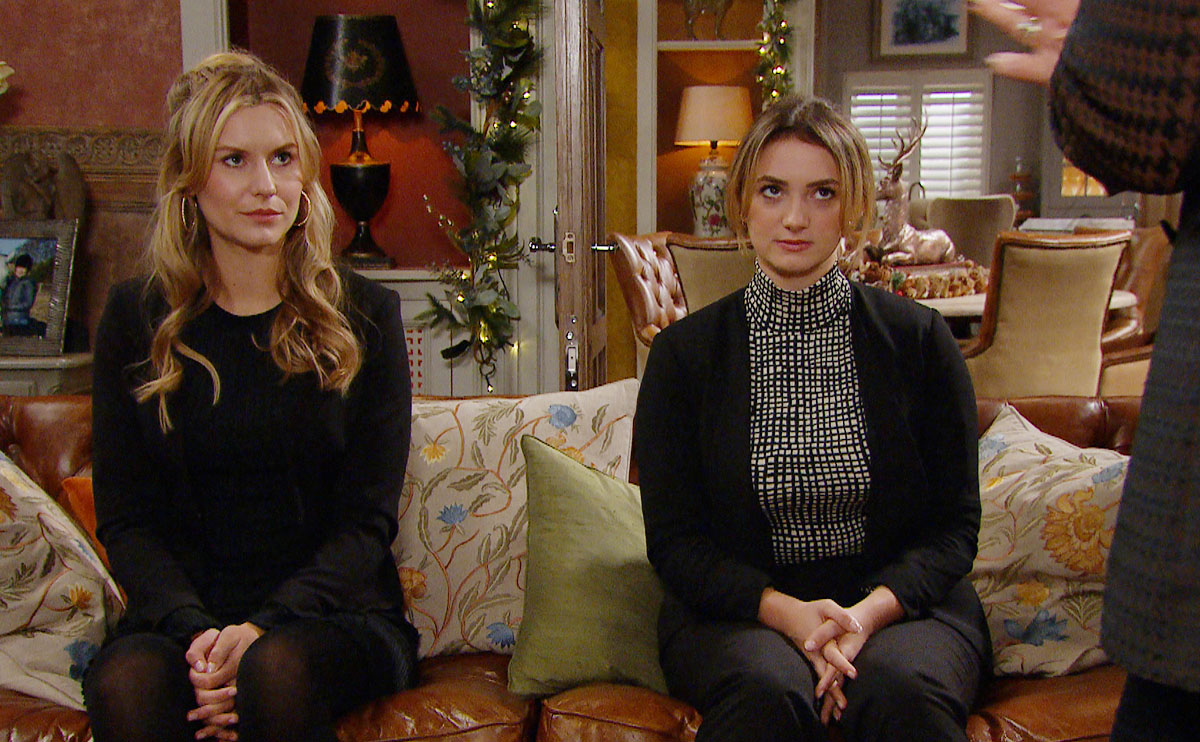 Elsewhere in the village, as Vinny (Bradley Johnson) continues to struggle with life without Liv, Mandy (Lisa Riley) is grateful when Jimmy (Nick Miles) offers to go and talk to the young widower.

As the two play cards, Vinny feels comfortable enough to open up to Jimmy, and is surprised by how much better he feels for it.

Seeing the two enjoying themselves, Will (Dean Andrews) invites the pair to play a game of poker in The Woolpack. 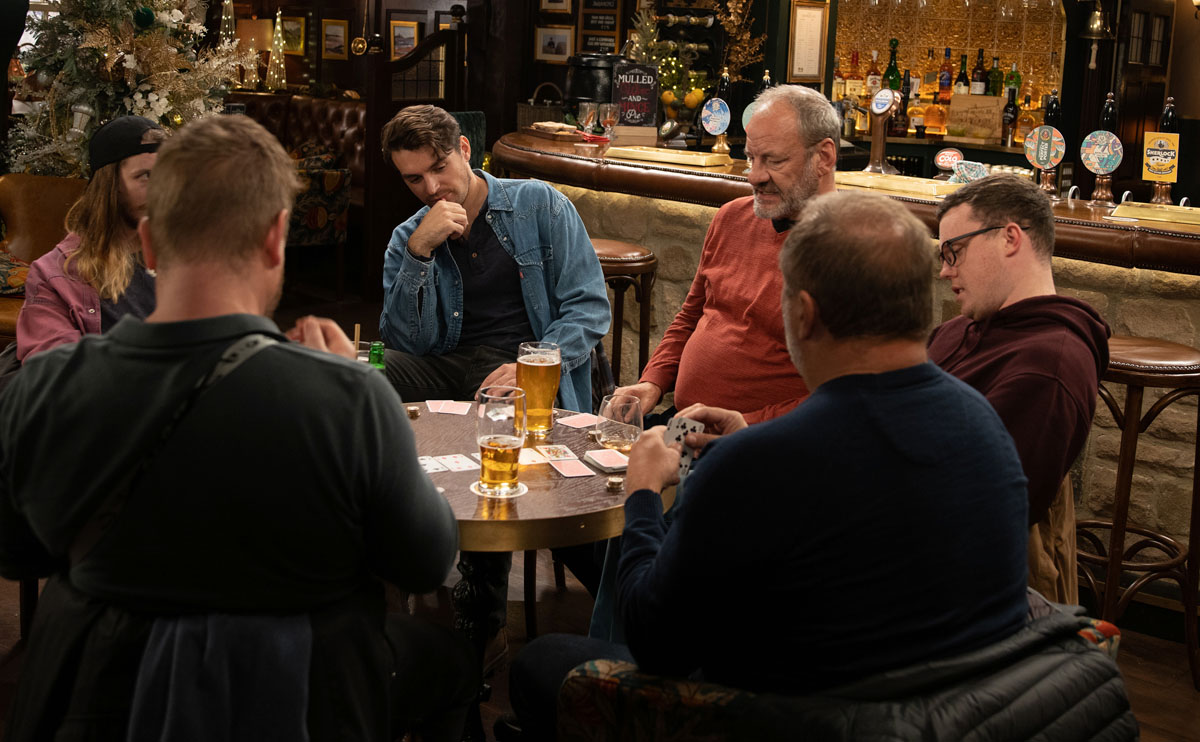 Word soon begins to spread, and before they know it Ryan (James Moore), David (Matthew Wolfenden) and Mackenzie (Lawrence Robb) have also joined the table.

They even attract the attention of flash newcomer Darren, who expresses interest in partaking in a game. 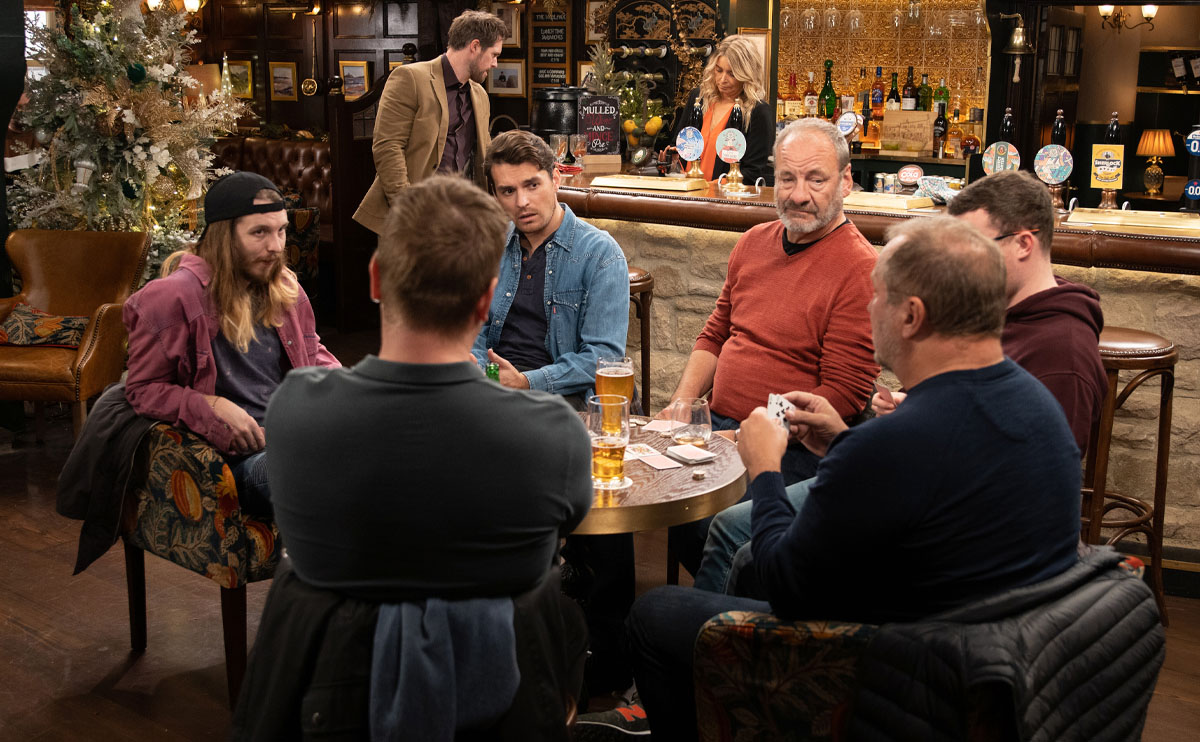 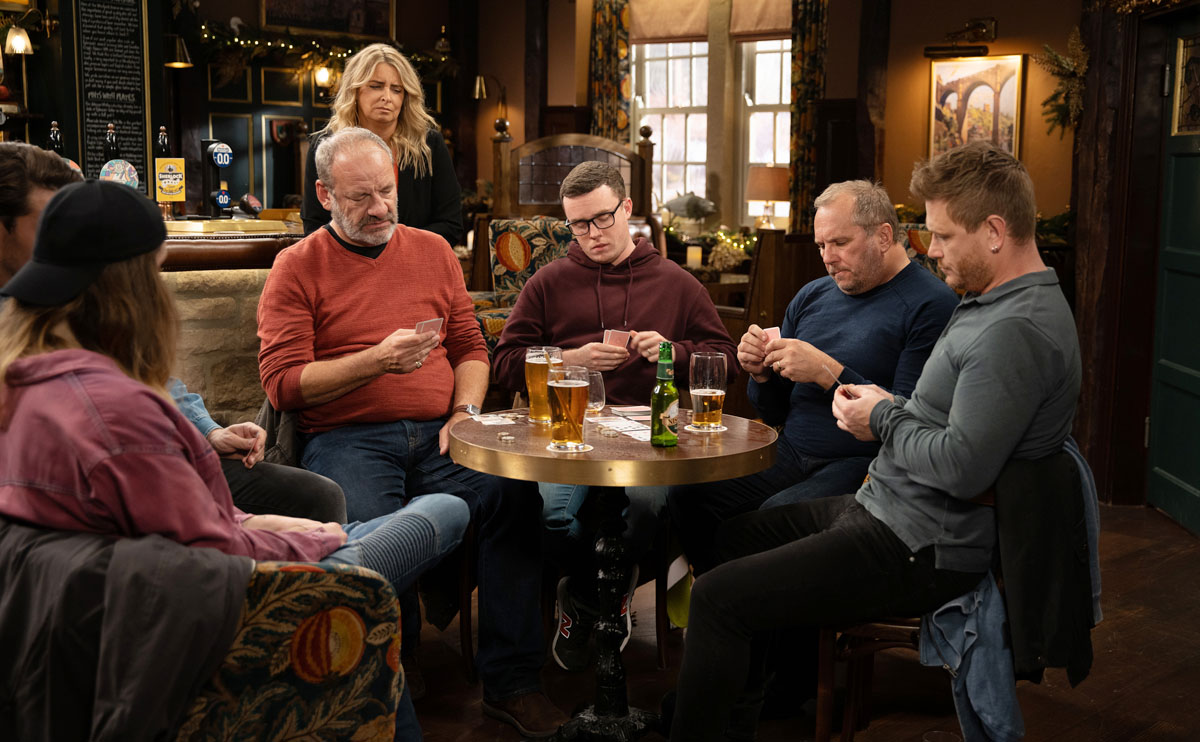 As Vinny continues to thrash the other players, he’s in his element, happy to have a distraction from all his troubles. But when Jimmy lets slip to Mandy, she’s furious, reminding him of Vinny’s late father Paul’s own debilitating gambling addiction. 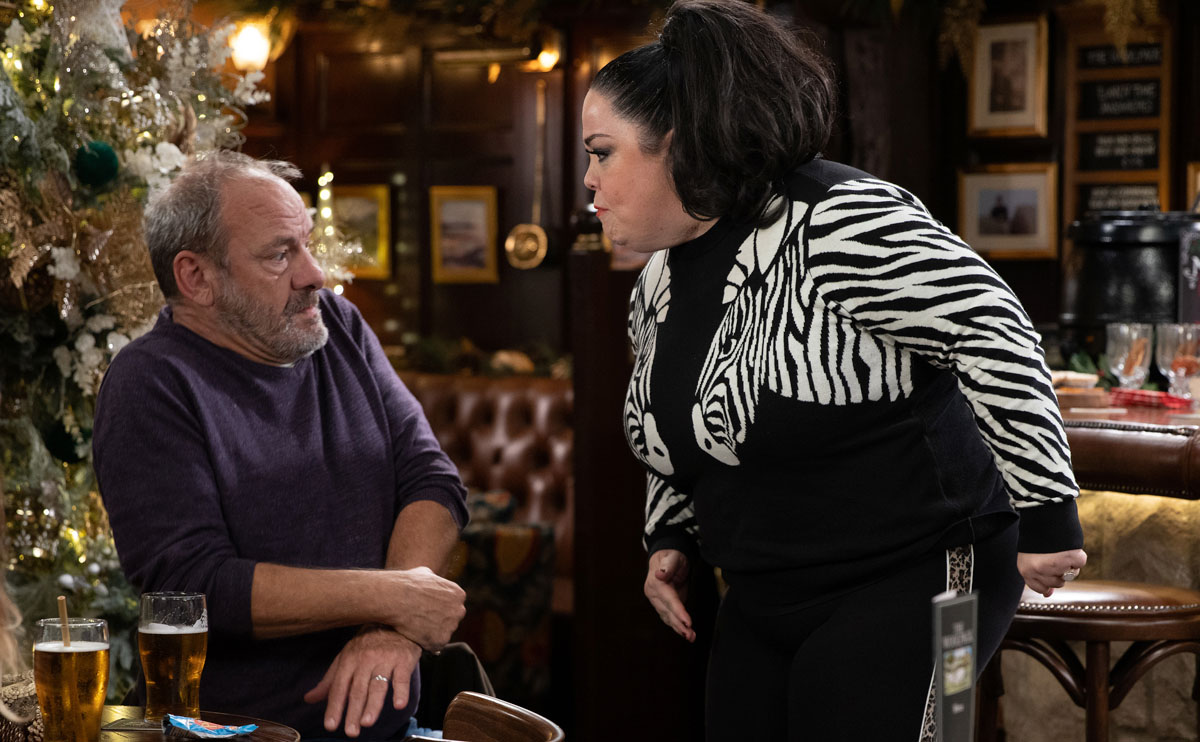 Vinny is frustrated when Mandy accuses him of turning into his father; he knows that he has a handle on things. 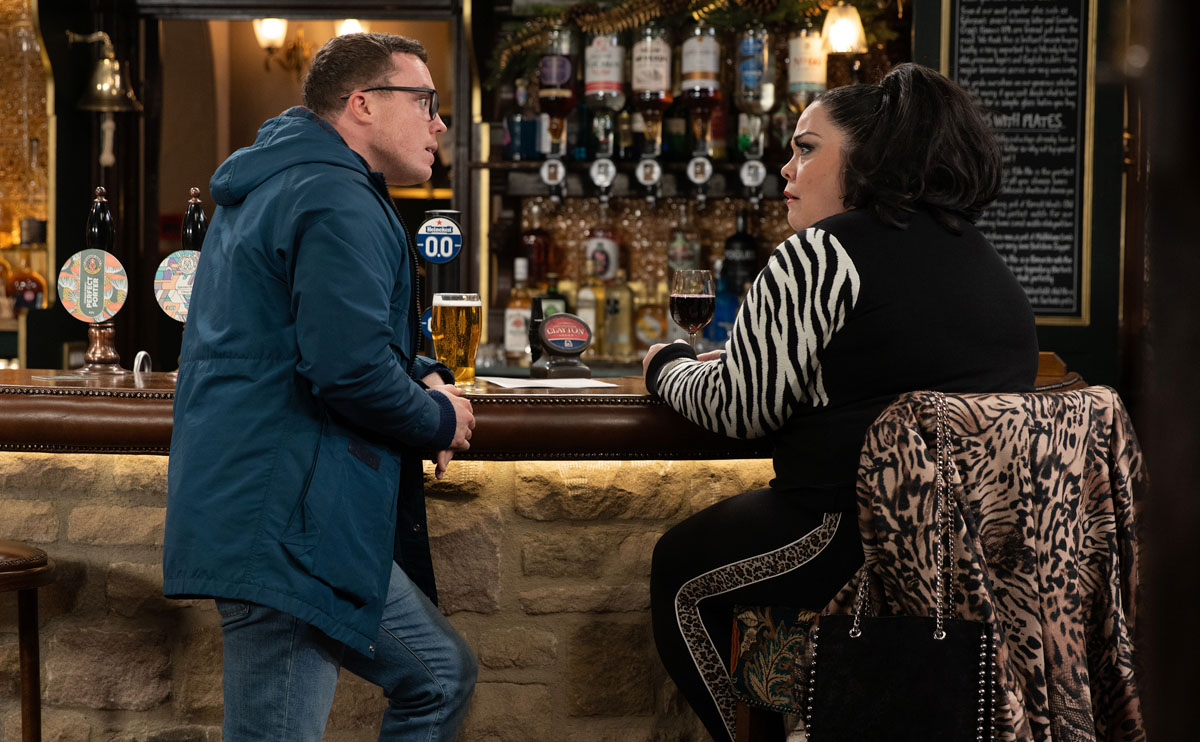 But the next day, as Mack and Vinny discuss tactics for their upcoming game with wealthy Darren, we’re left wondering whether it’s all going to end in tears…

Following Cathy’s (Gabrielle Dowling) failed attempt to set up April (Amelia Flanagan) and Arthur (Alfie Clarke), there’s still a tense atmosphere between the two teens, and when Charles invites them both to the auditions being held at the Hide the next day, the girls prepare to battle it out. 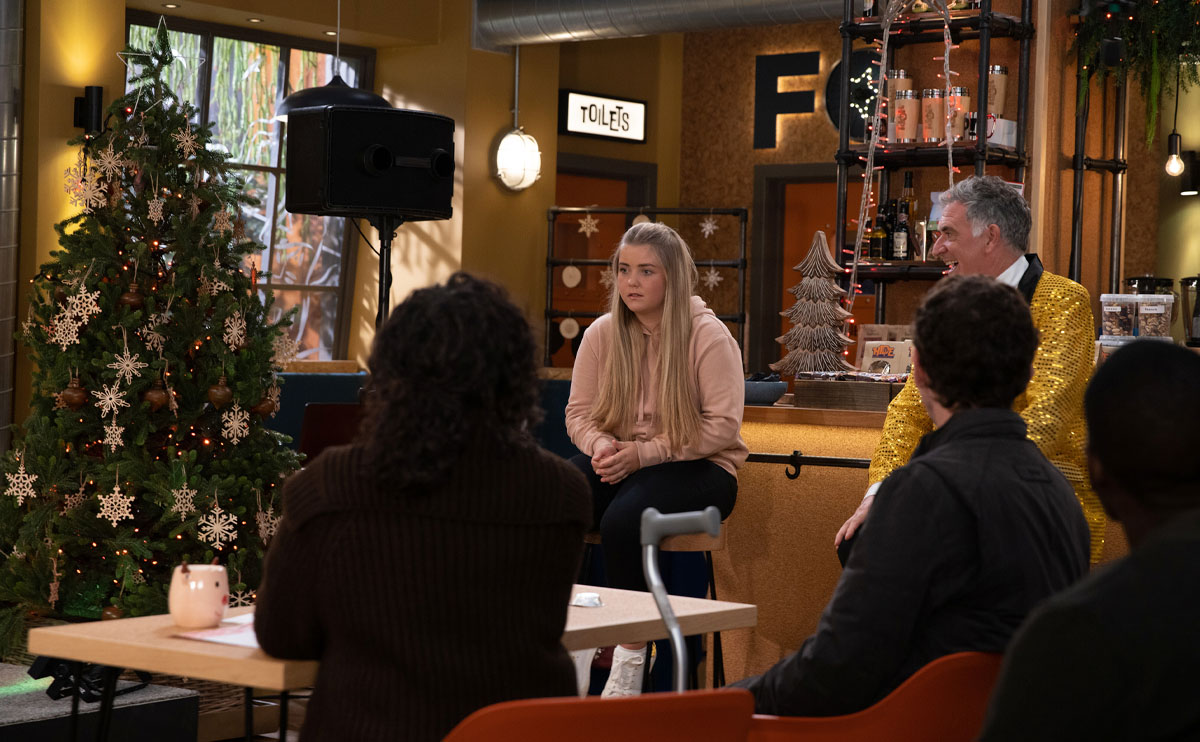 At the audition, Cathy panics as she watches Ethan belt out a Mariah Carey number. Is she really feeling up to this? 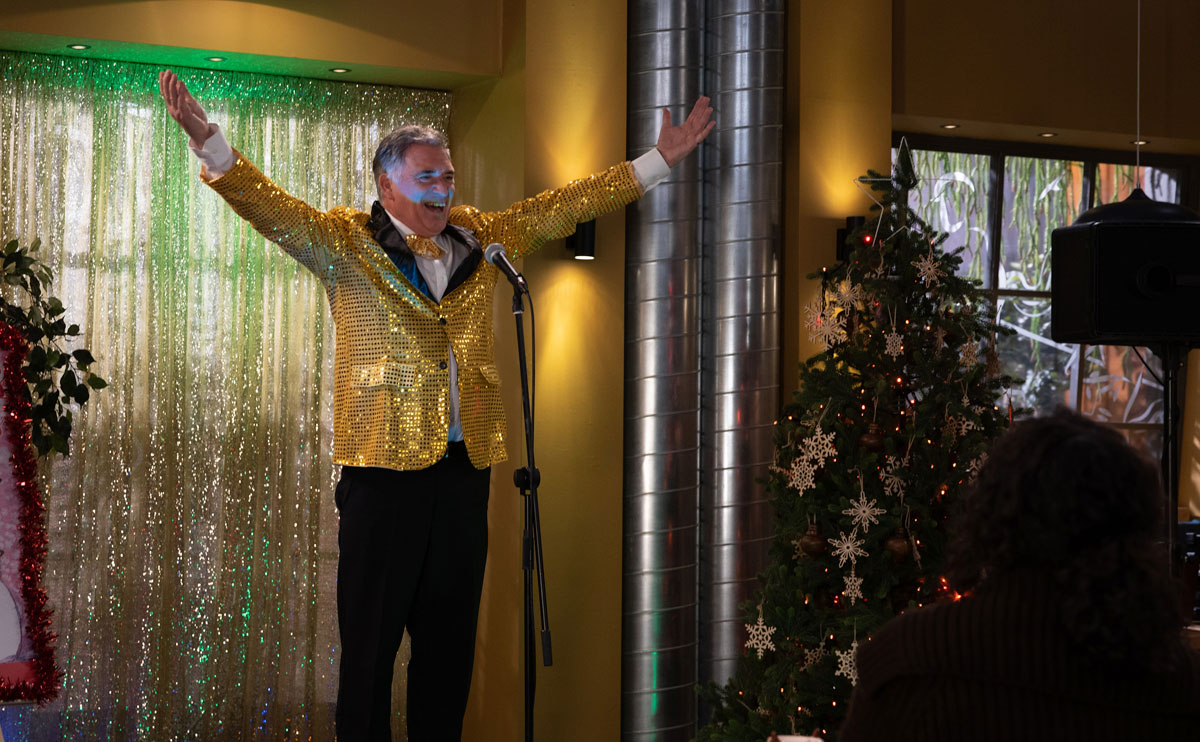 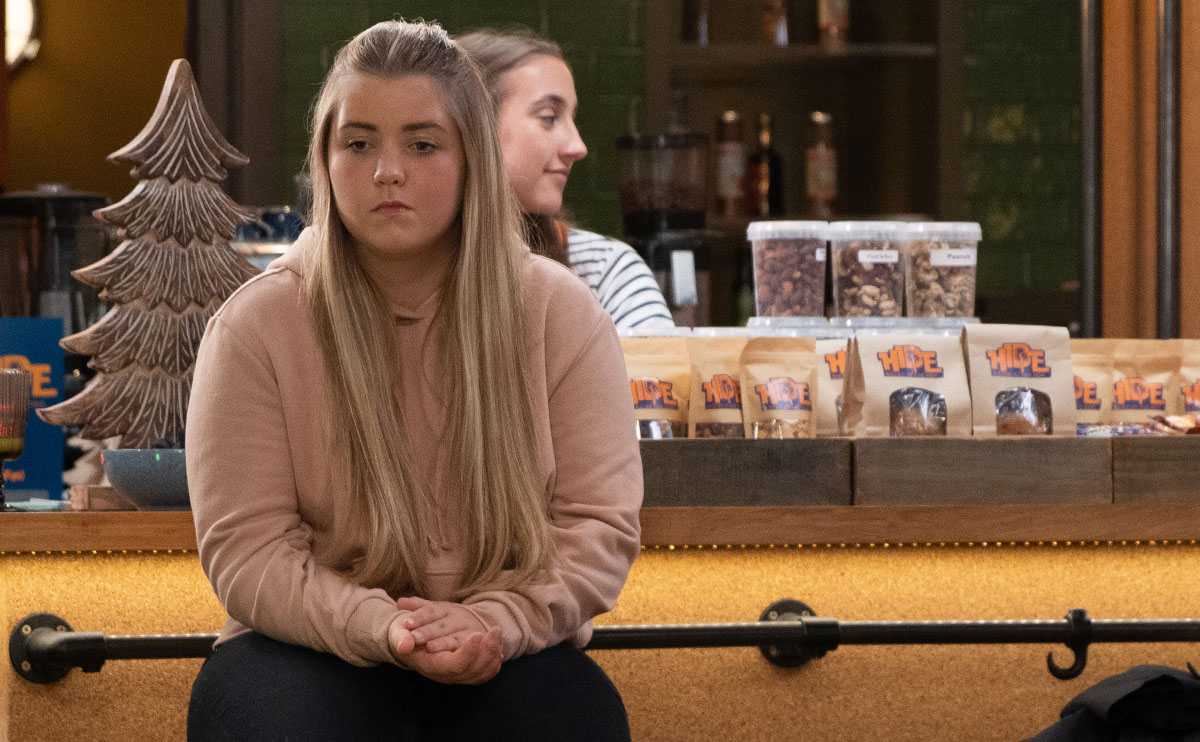 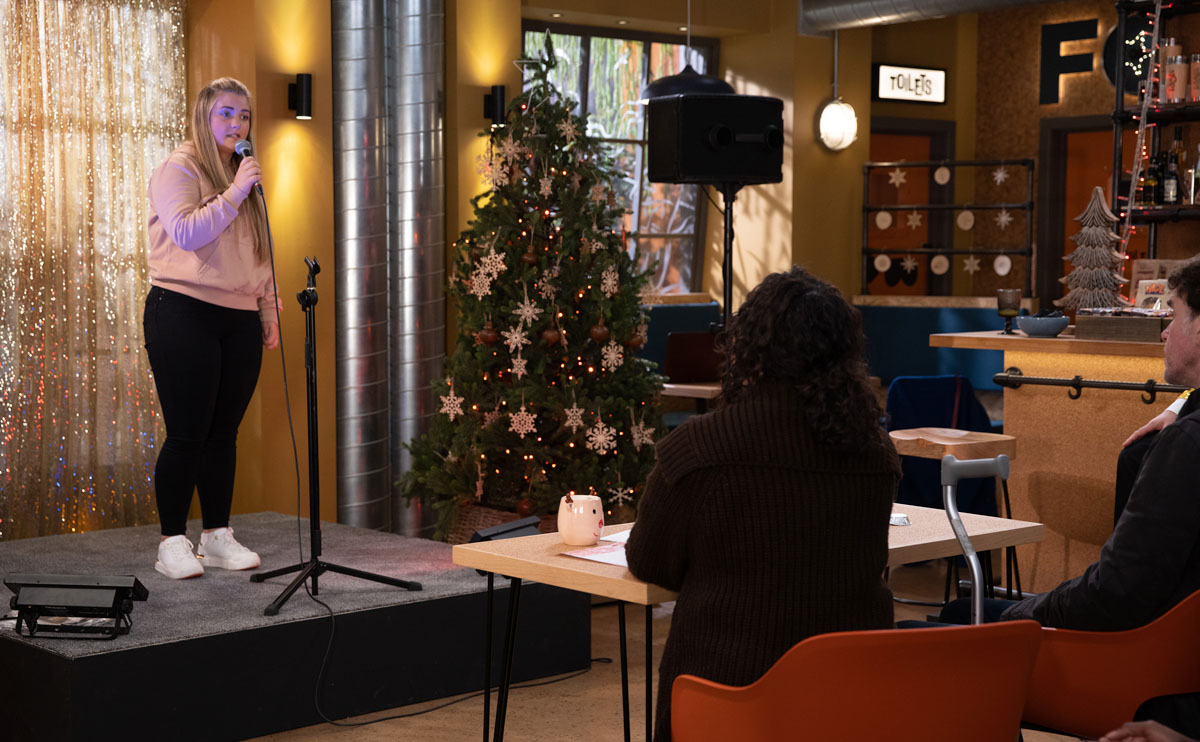 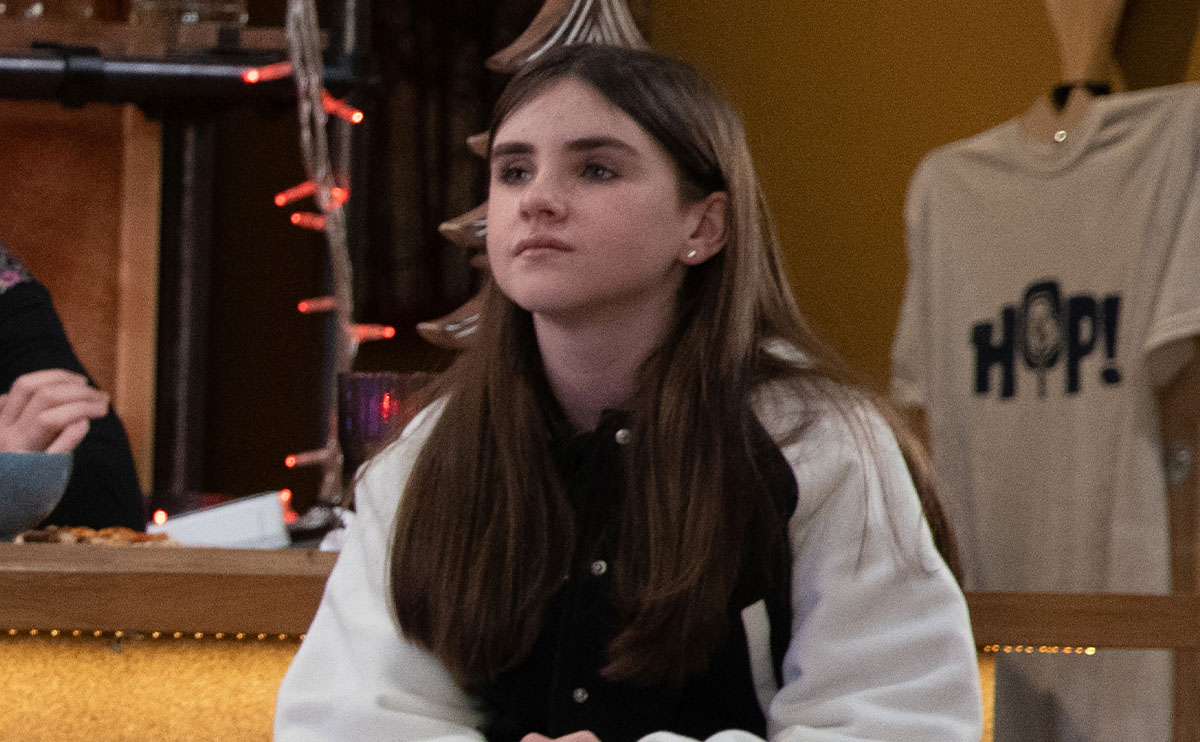 Plus, Bernice continues to struggle with her emotions as she comes to terms with the recent discovery that she’s going through the menopause.

Having dramatically quit her job following an incident last week, Bernice is regretting her outburst as she longs for some purpose, and both Laurel (Charlotte Bellamy) and Bear (Joshua Richards) convince her that she needs to bite the bullet and ask Mandy for her job back… 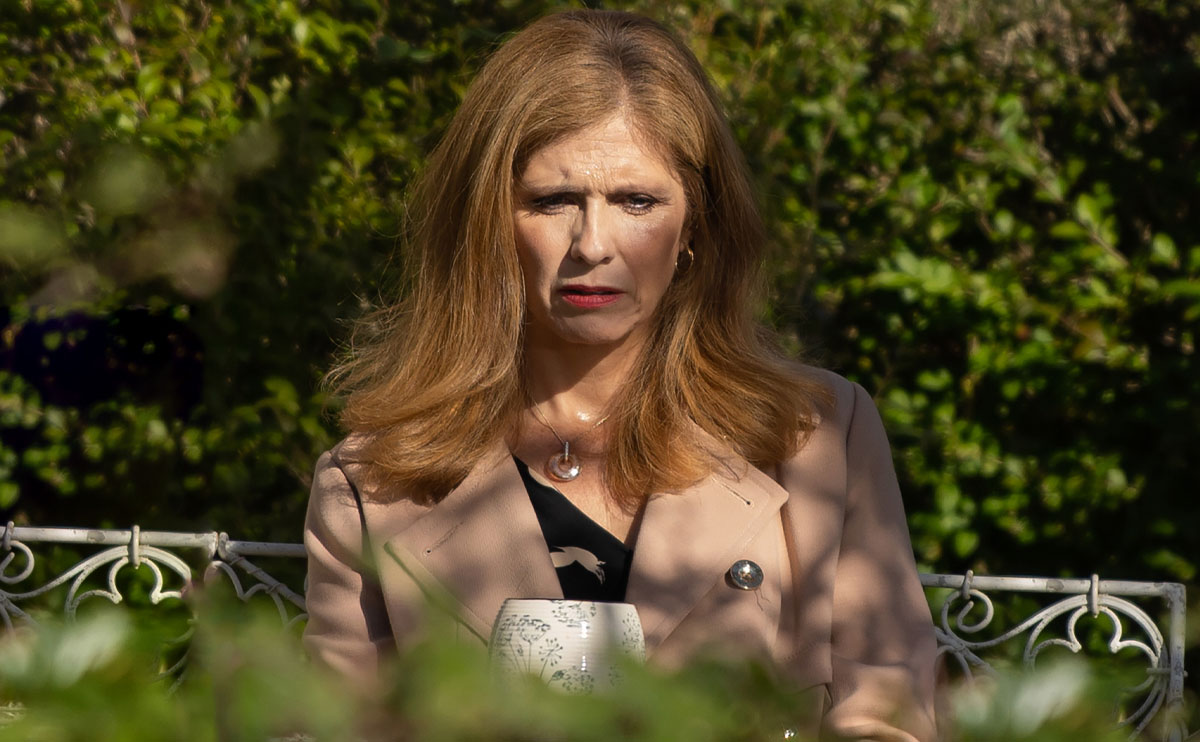 When she later stumbles across a joker card, left in the cafe following the morning’s poker game, Bernice can’t help but try to interpret what it means… which leads her to make an offer—but to whom?

Due to the World Cup continuing to affect schedules, the air dates for next week’s episodes are not yet confirmed.

Bernice struggles to digest her diagnosis as she grapples with both loneliness and other menopausal symptoms.

Moira and Amy have returned from Belfast and the atmosphere is frosty.

Amy insists her and Matt are over, determined to make Kyle her priority from now on.

As the poker game attracts other villagers, Vinny is soon in his element. Flash newcomer Darren shows an interest in the game.

Moira visits Cain, who is worried just how quickly their secret is spreading.

The rivalry for the choir auditions hasn’t abated. Cathy panics as she watches Ethan belt out Mariah Carey, while April is concerned when Cathy breaks down onstage.

Matty finds a collection of rocks placed in the middle of the barn and realises Kyle is creating a memorial for Al.

Jimmy lets it slip to Mandy that Vinny is gambling. She soon accuses a frustrated Vinny of turning into his father.

Amy, Moira and Matty feign an air of normality as they prepare Kyle for school but their anxiety is palpable.

Kim suggests Dawn and Gabby shadow her for a few months and the best will receive the job. The battle for the job at Home Farm begins.

Marlon prepares to return to work at the Woolpack.