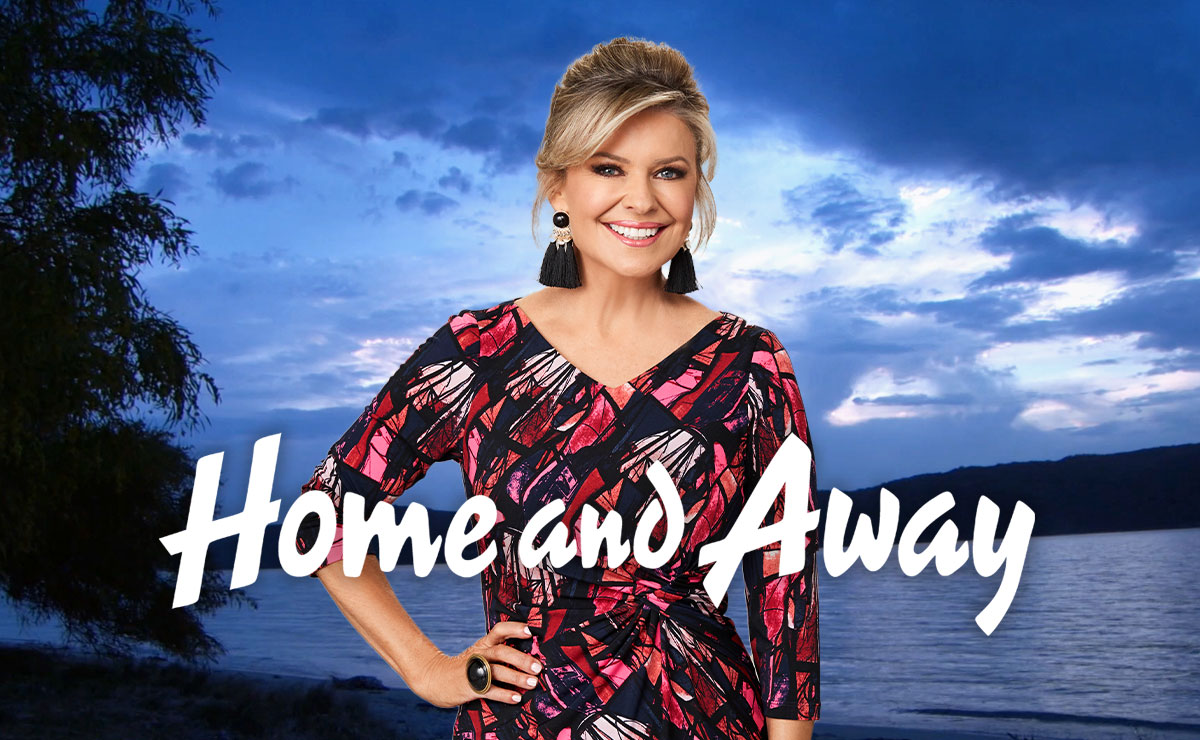 The mystery connection between Home and Away’s Marilyn Chambers and newcomer Heather has been uncovered, with the revelation that Marilyn gave birth to a secret child back in 1995.

Heather arrived in Summer Bay last month as one of Roo’s (Georgie Parker) students, but it soon became clear that she was actually in town for Marilyn. 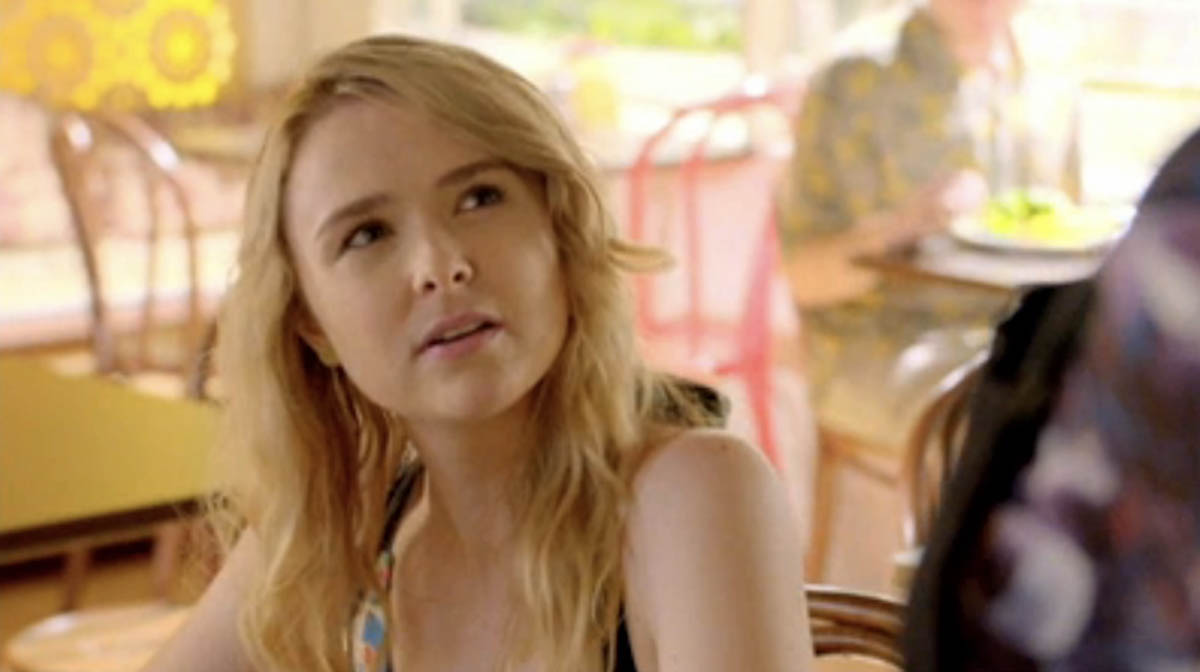 Heather quickly put down roots, moving into the caravan park and striking up a casual relationship with Nikau (Kawakawa Fox-Reo), and immediately started doing her best to torment Marilyn.

It began with uncomfortable glances and subtle comments, and culminated with Heather leaving an envelope outside Summer Bay House with Marilyn’s name on it – inside, a photo of a young baby, with the words “Guess who?” written on the back.

Heather also revealed to Roo that she had once had an affair with her boss, resulting in a baby which she was forced to give up. When Marilyn learnt of Heather’s supposed back story, it knocked her for six, and her facial expression made it clear to viewers that Heather’s story was actually Marilyn’s. 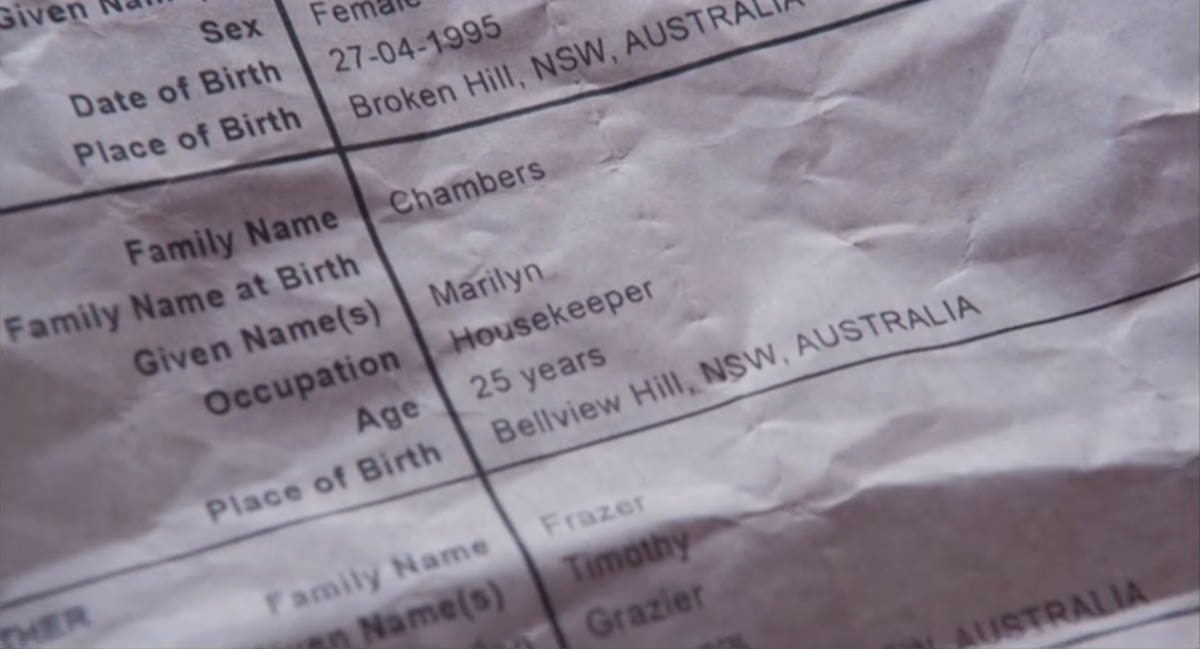 An episode earlier this week explained that Heather was in fact Marilyn’s daughter. Heather took out a birth certificate which revealed that she was born in April 1995 to Marilyn Chambers, a housekeeper, and Timothy Frazer, a grazier.

In tonight’s Australian episode, Leah (Ada Nicodemou) and Roo, who had staged an intervention after a series of tense confrontations between Marilyn, Heather and Nikau, came close to convincing Marilyn that her worries were all in her head.

Maz reassured Leah that she was still taking her medication, but when Leah asked if it perhaps needed reviewing, Marilyn admitted that it was worth a try. She even agreed to apologise to Heather, now convinced she may be the one in the wrong.

However, Heather’s next move convinced Marilyn that there was nothing wrong with her mental state, and that Heather really was out to get her. 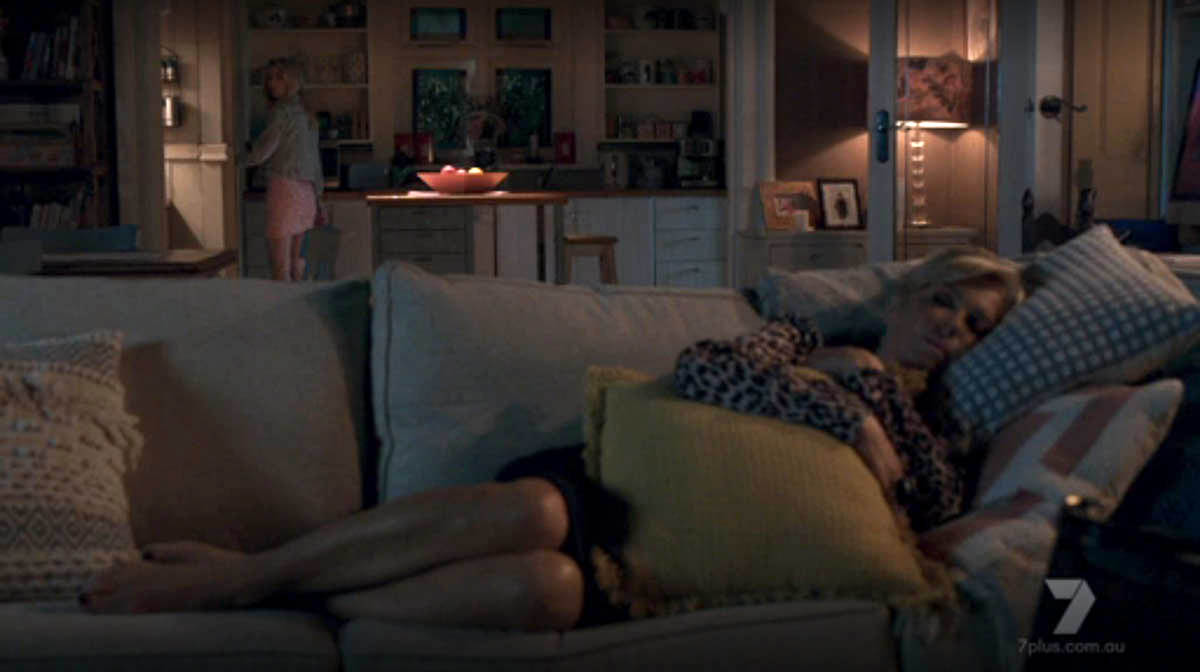 In the night, Heather broke into Summer Bay House, where Marilyn was asleep on the sofa. 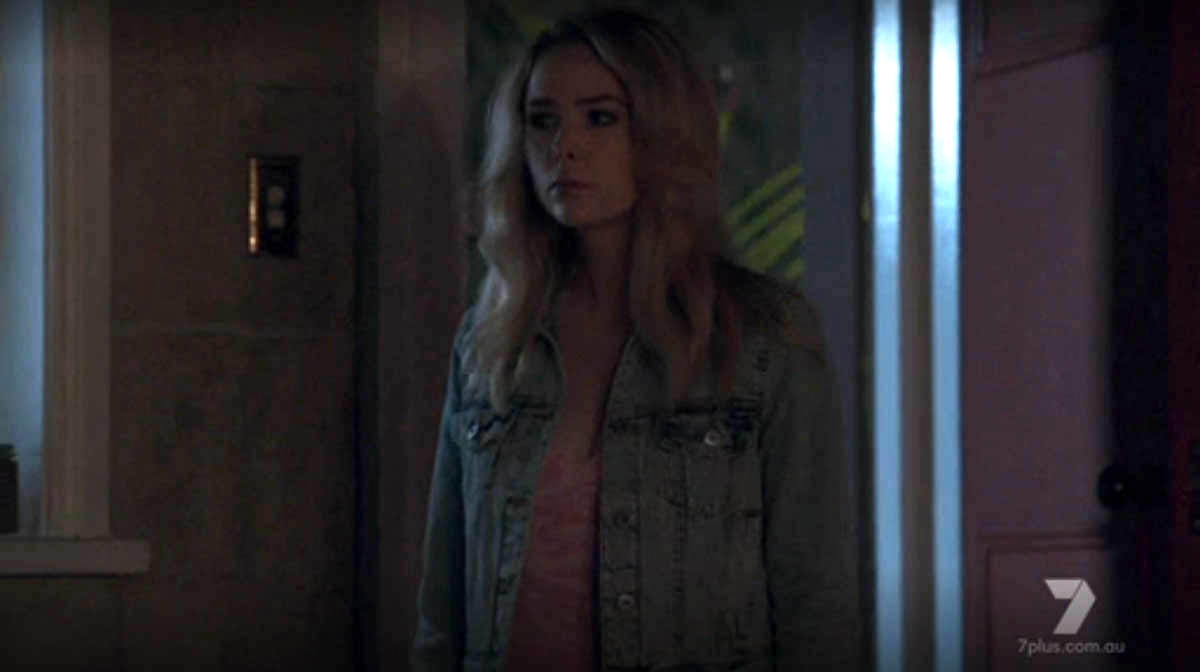 Sneaking silently into the kitchen, she opened a bottle of wine, emptied it and placed it on the coffee table in front of Maz, with a half-filled glass next to it. She also placed the baby photograph in Marilyn’s arms. 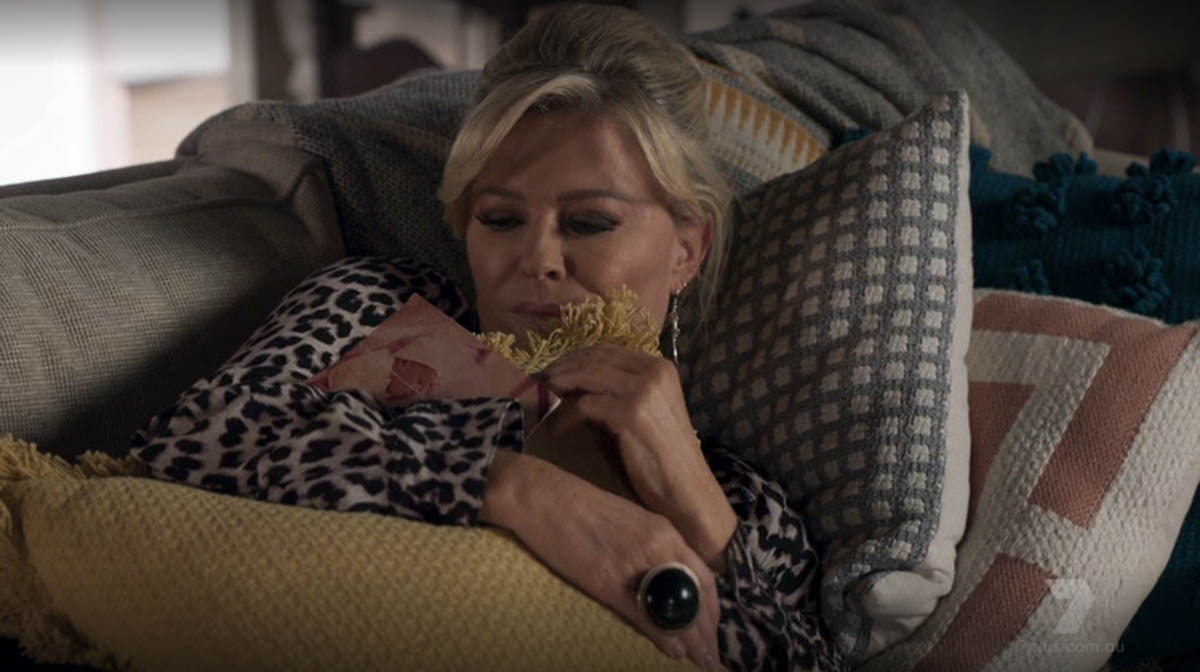 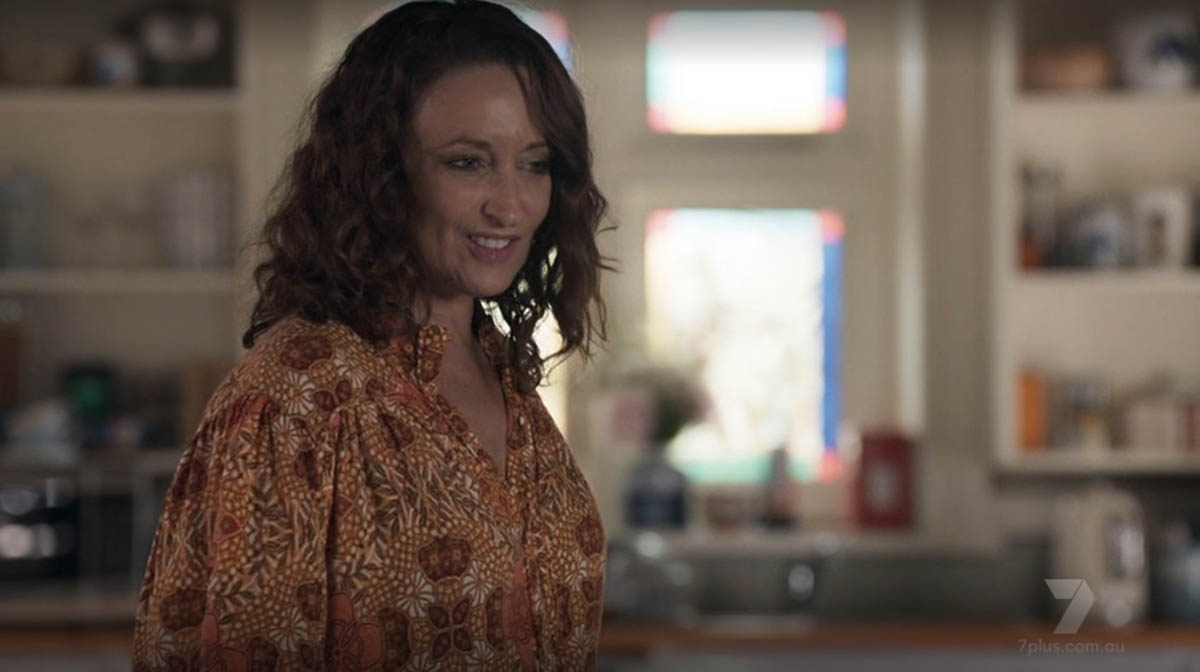 Exactly as Heather planned, Marilyn was discovered that way by Roo the next morning, with her closest friend now thinking that she’d turned to alcohol to help with her issues.

In the diner later on, Heather asked Marilyn, “how are you feeling this morning? You have a nice sleep?” making it abundantly clear to Maz that it was she who had set up the incriminating scenario. 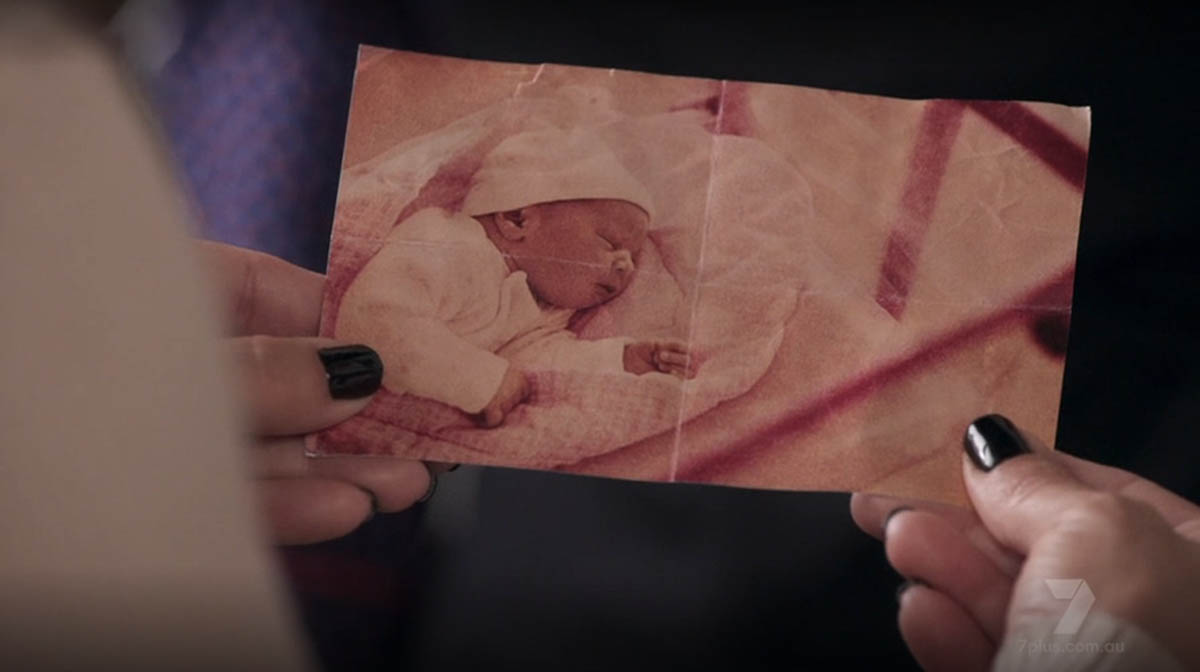 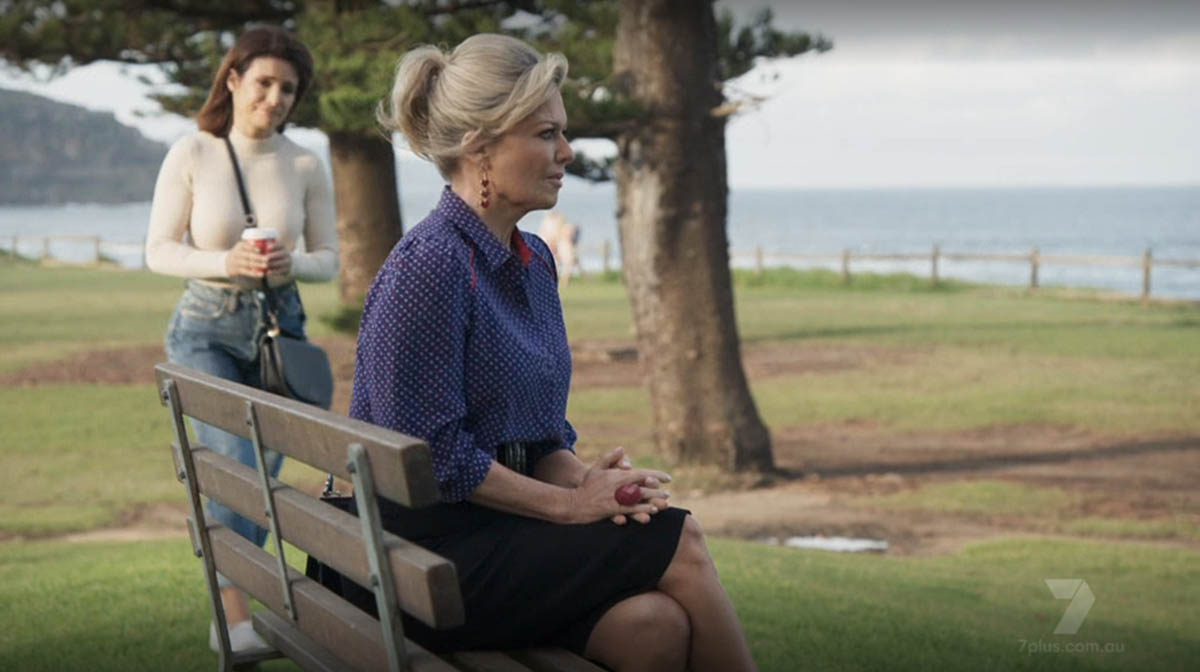 She confessed a secret that she’s kept hidden for the past 27 years – that, when she was younger, she’d had an affair with her boss, a man called Tim, resulting in a baby. 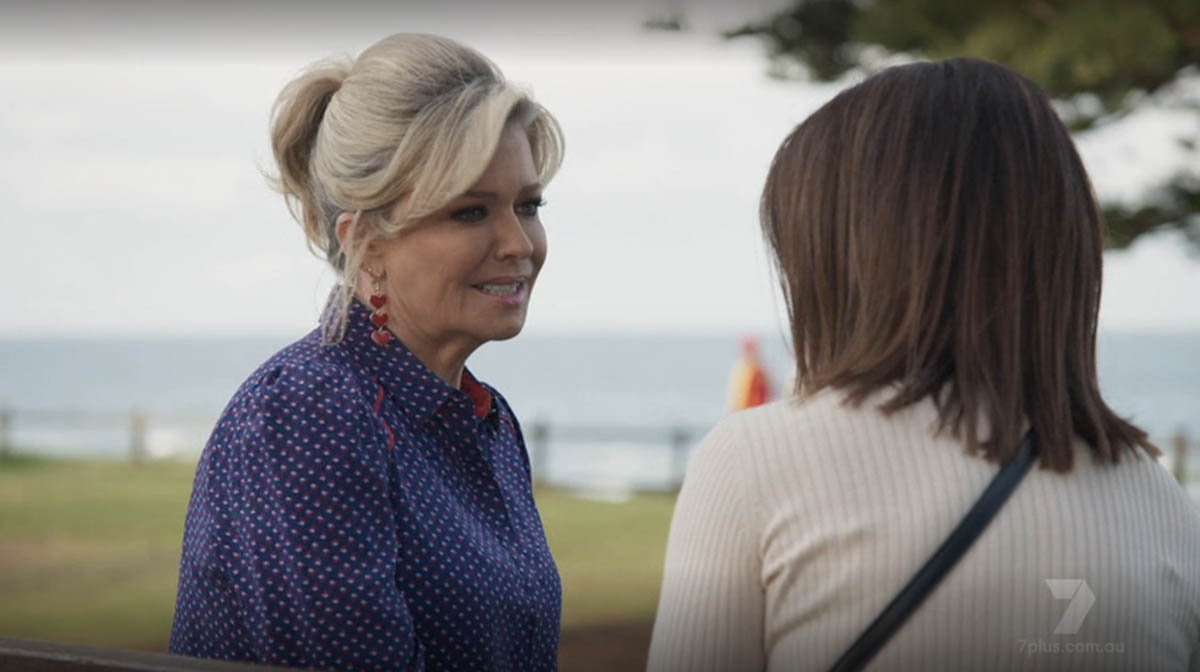 “A long time ago, when I was very young, I went on a trip around the country with my boyfriend, and it didn’t work out, and we broke up.

“I got a job as a housekeeper on a cattle station in the middle of nowhere, and it wasn’t very easy for me at the time, and I was very isolated. But my boss was very, very kind to me and I leant on him. And I was young and stupid.

“I got pregnant. And I had a baby girl. And I think that Heather is my daughter.” 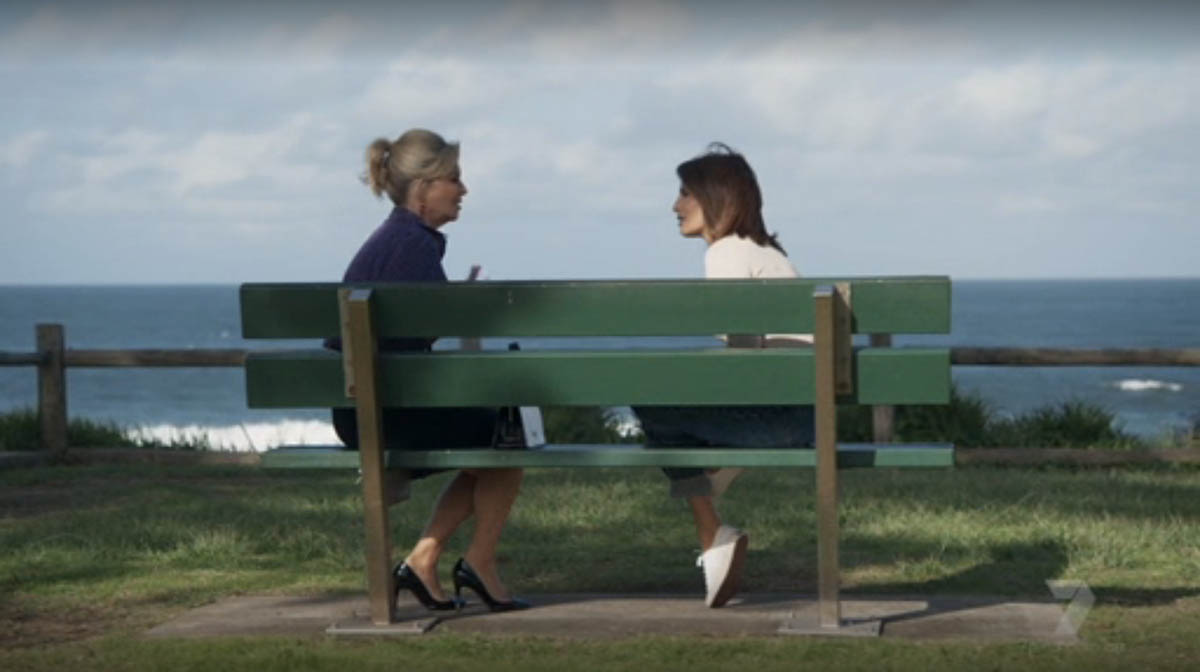 She confessed that she’d never said it out loud before, “not to John, not to anyone.”

When she told Tim that she wanted to keep the baby, he told his wife. The couple stayed together and even let Marilyn stay with them until after the birth. Everything seemed fine, but, soon after the birth, everything changed.

The couple insisted that they wanted to adopt Marilyn’s baby, that they could give her a better life. Marilyn, who didn’t have a job, anywhere to live or any money, thought she was doing the right thing, and that the baby would have a better life with her dad, in a safe, secure home. 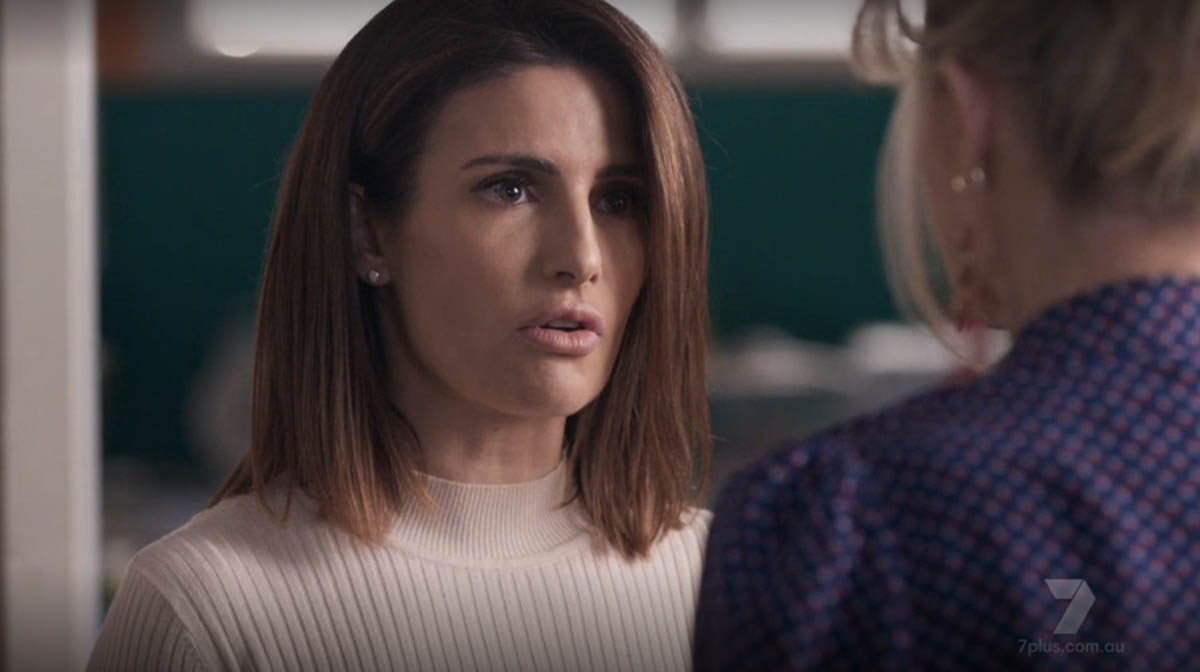 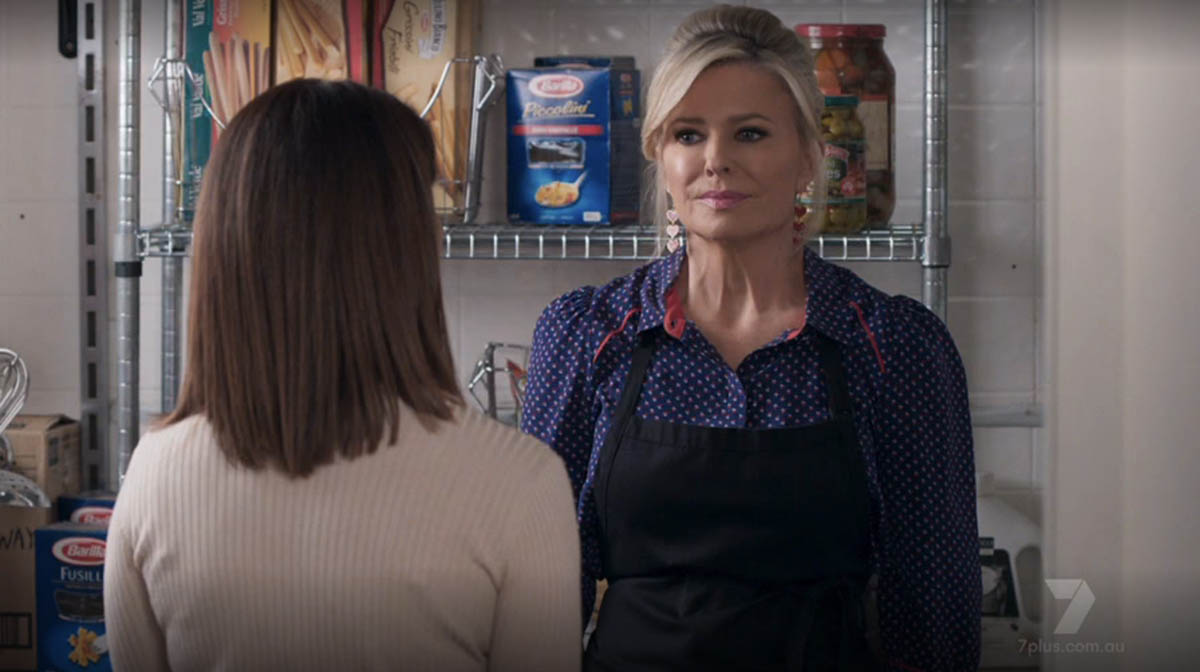 Now, 27 years later, her daughter has grown up and has come looking for her.

Leah tried to get Marilyn to open up to Alf or Roo, her two oldest friends, but Maz was worried about what they would think.

“I’ve known them for most of my adult life and I’ve never said a word. I don’t think they’d be able to look me in the eye if I told them.”

Marilyn Chambers first appeared in Summer Bay in 1989 as the girlfriend of Lance Smart (Peter Vroom). She turned down Lance’s marriage proposal a few months later, prompting her to take a three-month break from the bay, but soon returned and eventually embarked on a whirlwind romance with Phil Bryant (Vince Martin) in 1992.

Marilyn and Lance / Marilyn departs with Phil and Toni in 1992

She and Phil were soon engaged, and they left Summer Bay that year alongside Phil’s daughter Toni (Kathryn Dufty). They returned to Phil’s large cattle ranch, a property he ran with his brother, and the pair were married off-screen in September 1992.

Maz returned in June 1995, and at the time we were led to believe that she had left Phil as soon as she discovered he had been cheating on her, immediately coming back to Summer Bay. Upon her return, she broke down in Alf’s storeroom as she explained that Phil was in love with someone else. 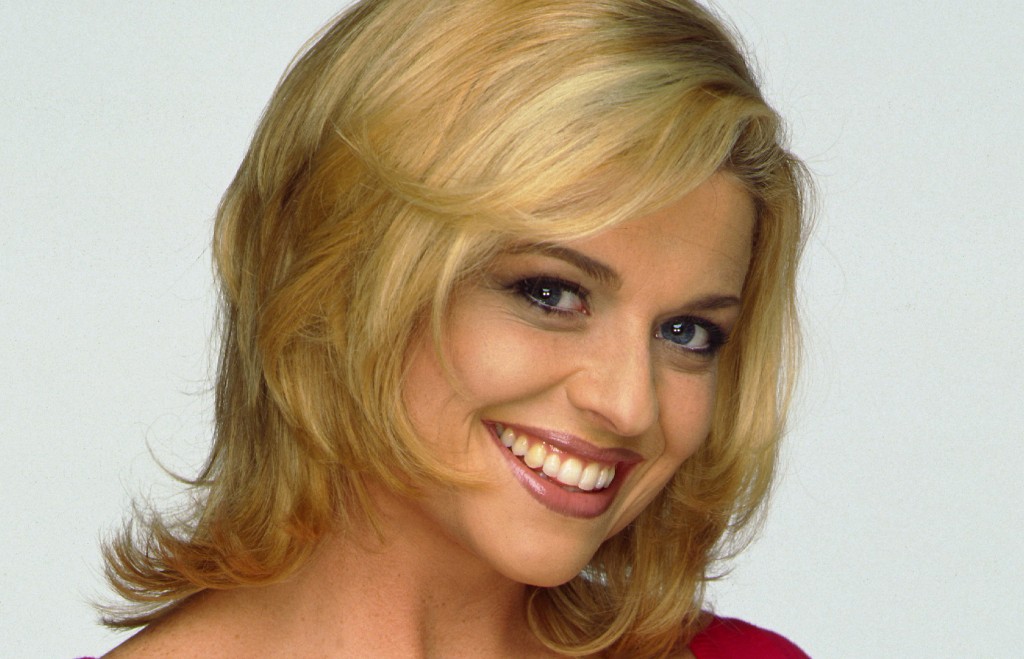 Emily Symons as Marilyn during her second stint on Home and Away.

Now, this latest revelation rewrites Marilyn’s history, suggesting that she and Phil must have split up sometime back in 1994, with Marilyn embarking on a new relationship with a boyfriend that she went travelling with.

After they split, she began working on a cattle station, formed a close bond with her boss, and the pair had an affair which resulted in a baby—with Marilyn returning to Summer Bay only 5 weeks after the baby’s birth.

Also in the same episode, Heather also learnt that Marilyn has an adopted son, Jett (Will McDonald), a fact which seemed to hurt her. When the pair finally talk, how will Heather react to the fact that her mother, who she believes abandoned her, went on to adopt a child of her own? 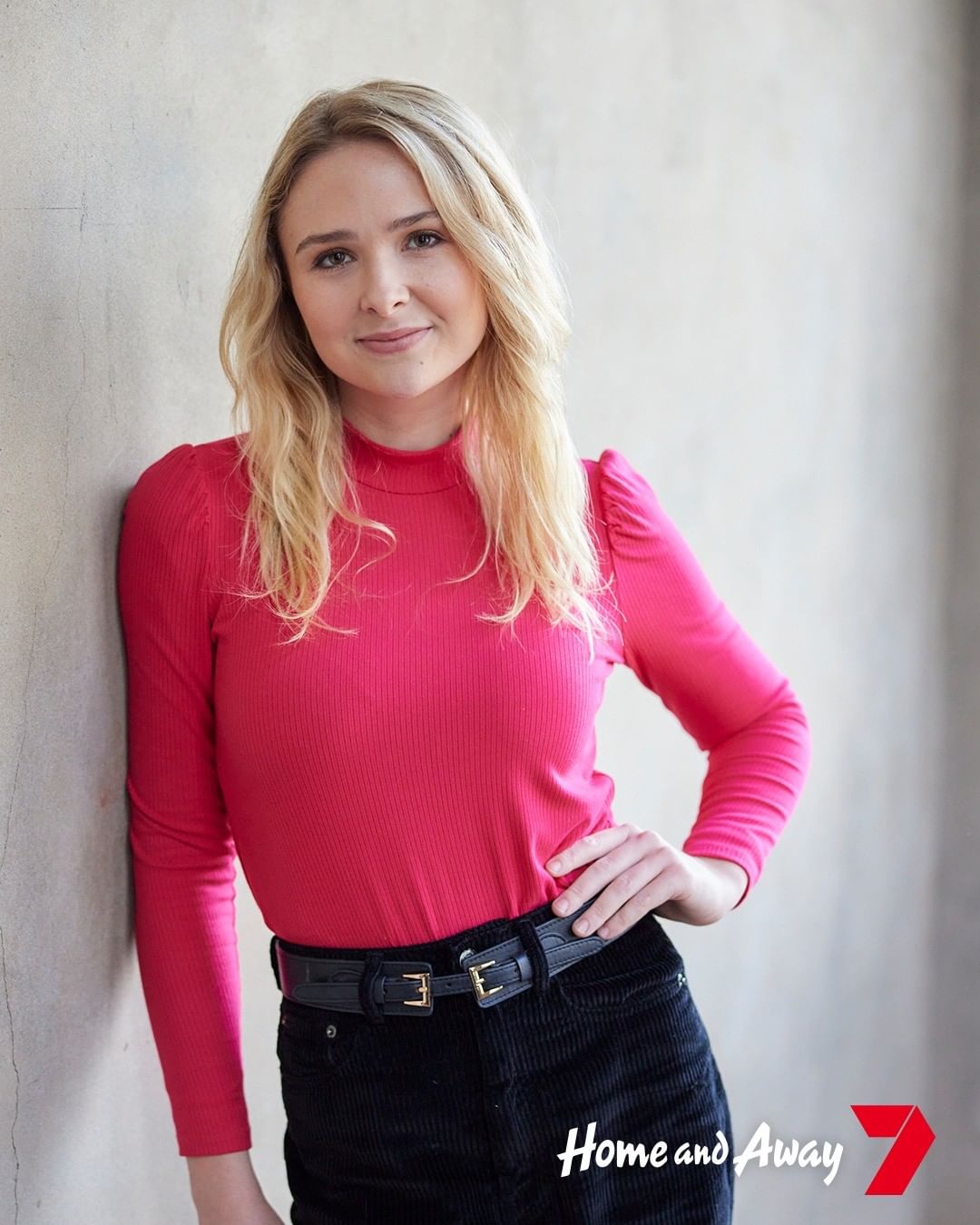 Next week’s episodes suggest that the drama is far from over, and that Marilyn and Heather still have some way to go before they form a relationship. Tuesday’s episode will see Marilyn get framed for abuse, and on Wednesday, Roo is set to accuse Marilyn of online bullying.

Thankfully, by the end of next week, the mother and daughter will begin working to form a bond. In the first of next Thursday’s triple bill, “Marilyn and Heather stop pretending,” while in the second episode, spoilers ask, “Will Heather give Marilyn a second chance?”

Will the pair finally get the chance to form a mother-daughter bond after 27 years apart?

UK viewers will see these scenes from mid-October.