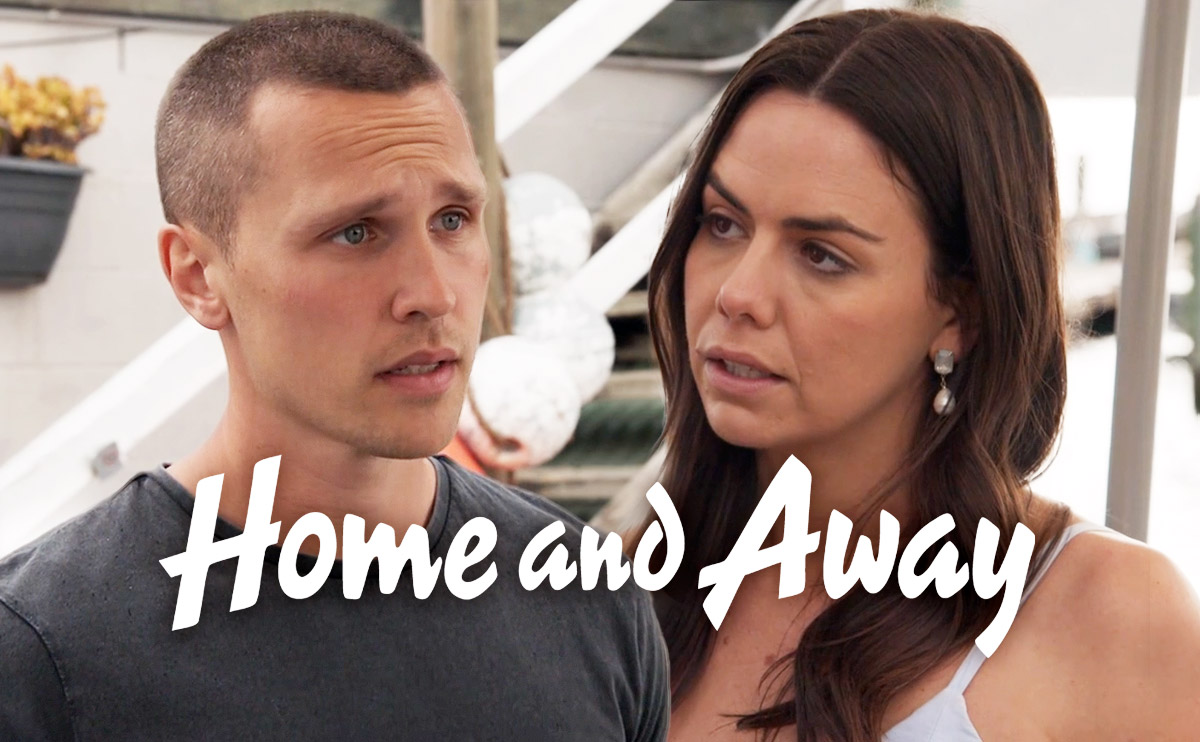 Coming up next week on Home and Away in the UK, Mackenzie’s ultimatum to Logan backfires, as Tane has a plan to stop Nik leaving Summer Bay…

Mackenzie (Emily Weir) is certainly learning that three is a crowd since inviting Logan’s (Harley Bonner) ex-girlfriend Neve (Sophie Bloom) to stay with them at the apartment—just a matter of weeks after Logan first moved in. 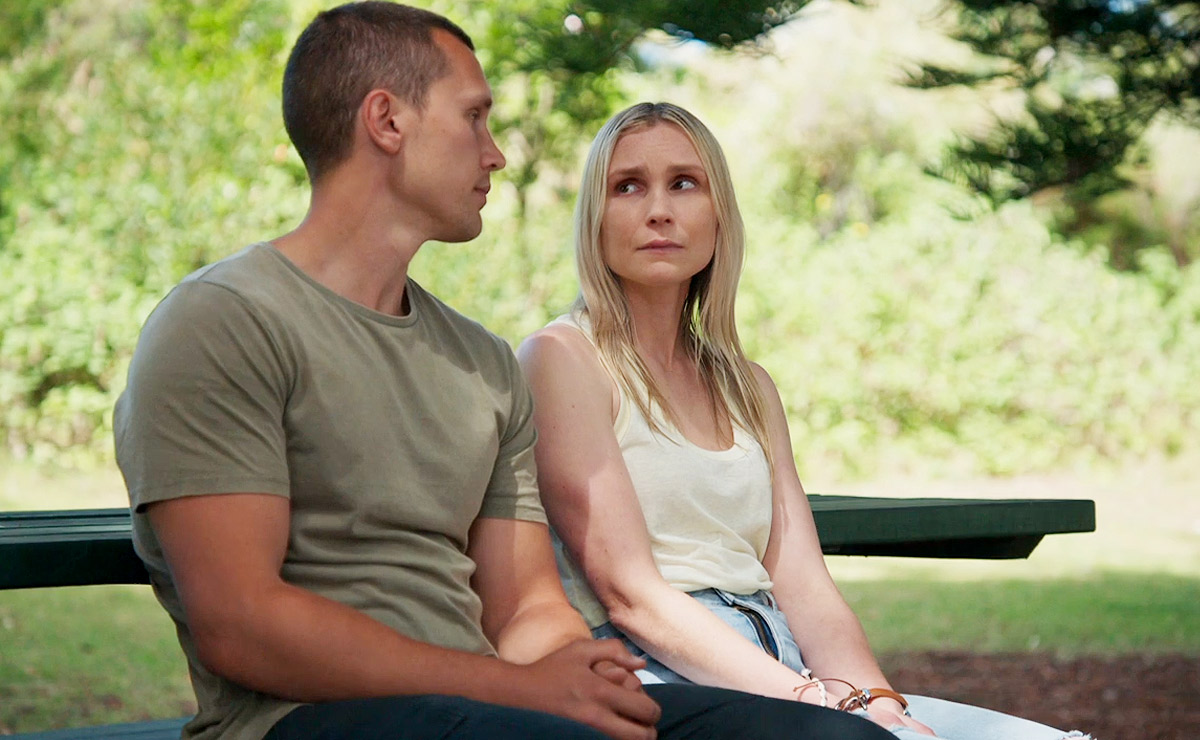 Logan was shaken when Neve turned up unannounced two weeks ago—he’d thought she was dead after she went AWOL whilst they were both serving as army medics overseas.

It soon became clear that Neve was suffering from PTSD, and knowing that Neve would be court-martialled if it was discovered she was back in Australia, Logan took it upon himself to help her.

With Mac having already gone through a painful break-up with Ari (Rob Kipa-Williams), after his ex-girlfriend Mia (Anna Samson) arrived in town last year, Mac has been understandably worried that history was about to repeat itself. 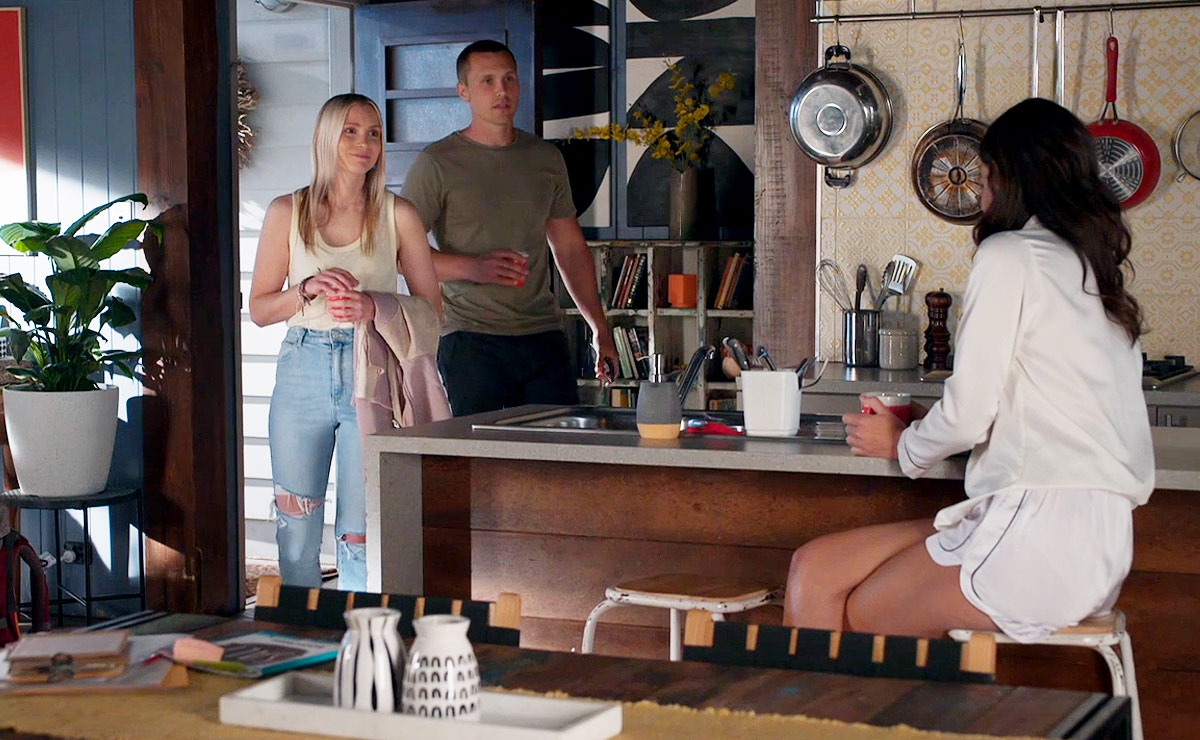 When Logan announced that he was going to put up Neve in the local motel, Mac quickly suggested Neve stay with them—thinking to herself that it would pay to keep her enemies close, rather than have Logan alone in a hotel room with his ex.

Next week, Neve’s behaviour continues to concern both Mac and Logan. Being located right above the seaplane wharf, Neve soon finds herself triggered by the noise of the plane’s engine. 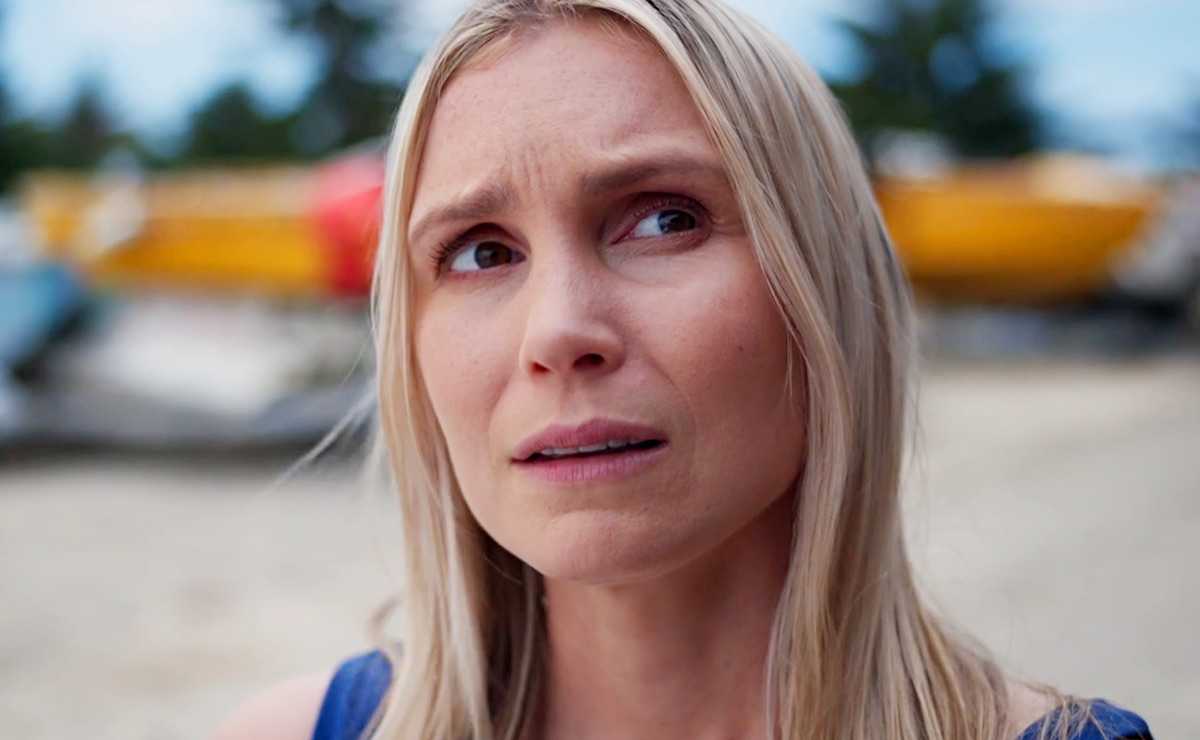 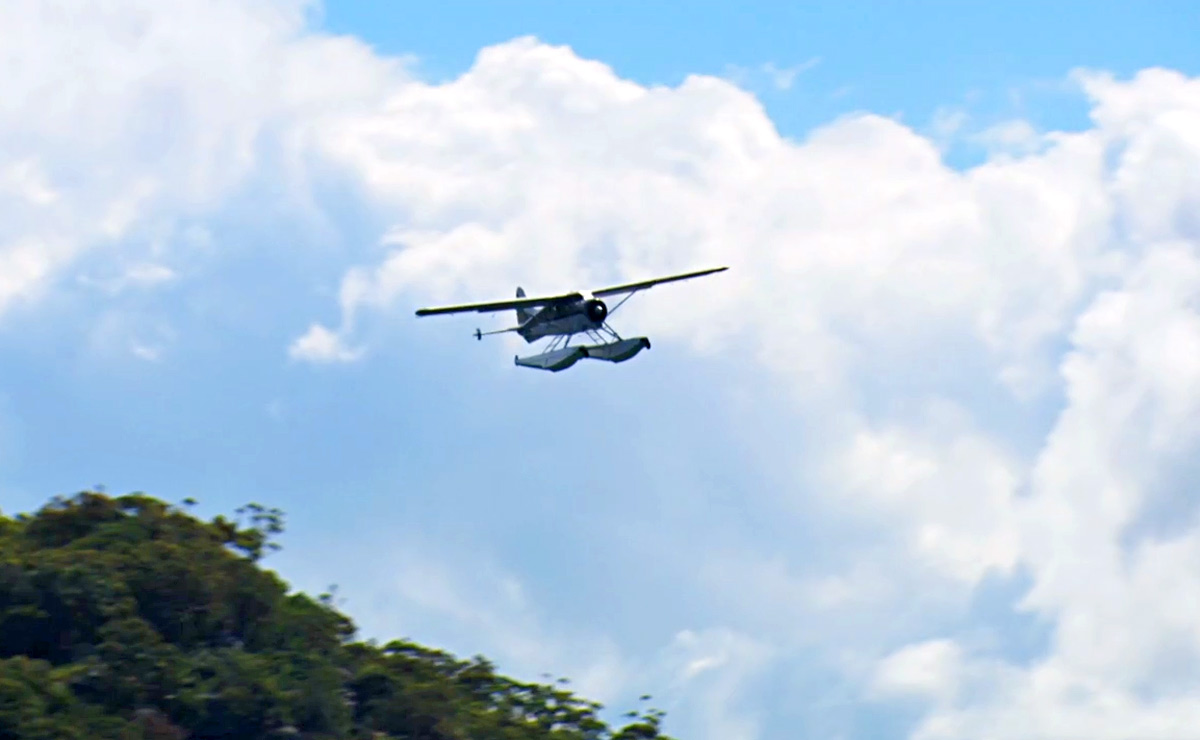 When Bella (Courtney Miller) later starts taking some photos around Flat Beach, Neve immediately clocks onto her and becomes ultra paranoid—if anyone spots her in a photo, she could be thrown in jail.

Neve runs to snatch Bella’s camera, and in the ensuing struggle manages to elbow Logan in the face. 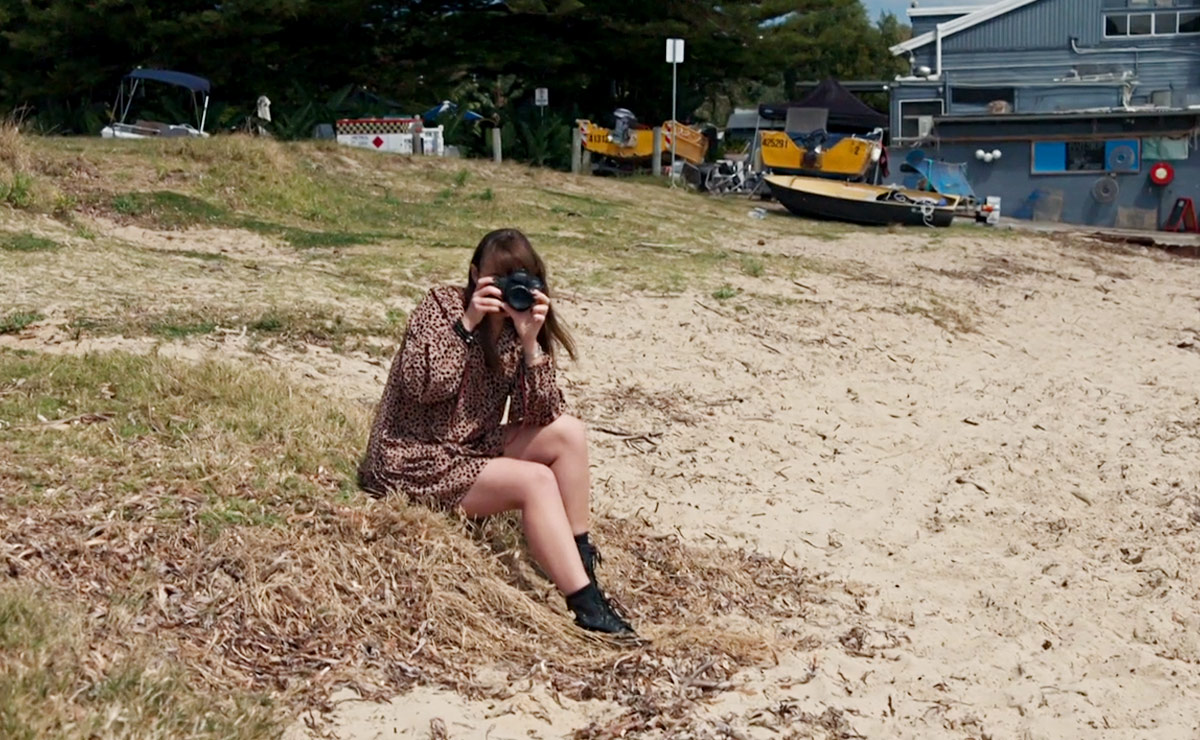 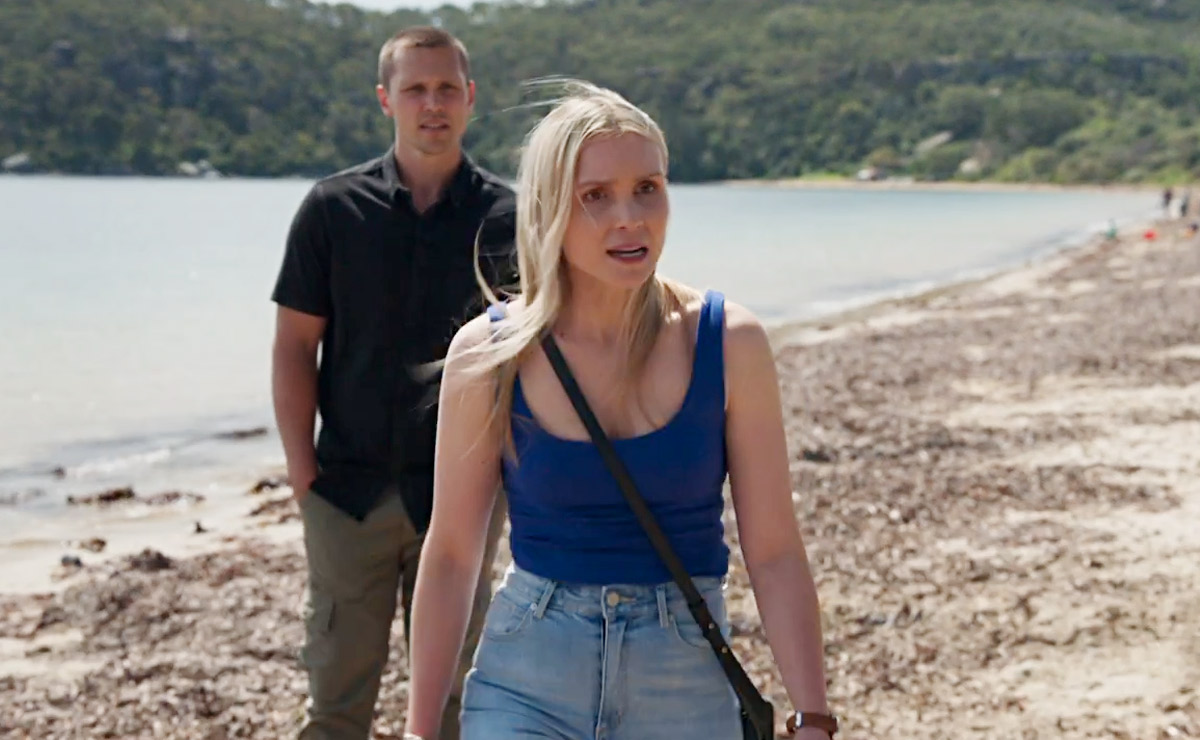 As Logan confronts her over her reaction, Neve denies that she angers too easily, sick of Logan trying to push a PTSD diagnosis onto her.

However, it’s only compounded further when a backfiring outboard motor, that Alf (Ray Meagher) is working on nearby, leads to Neve throwing Logan to the ground for his protection. 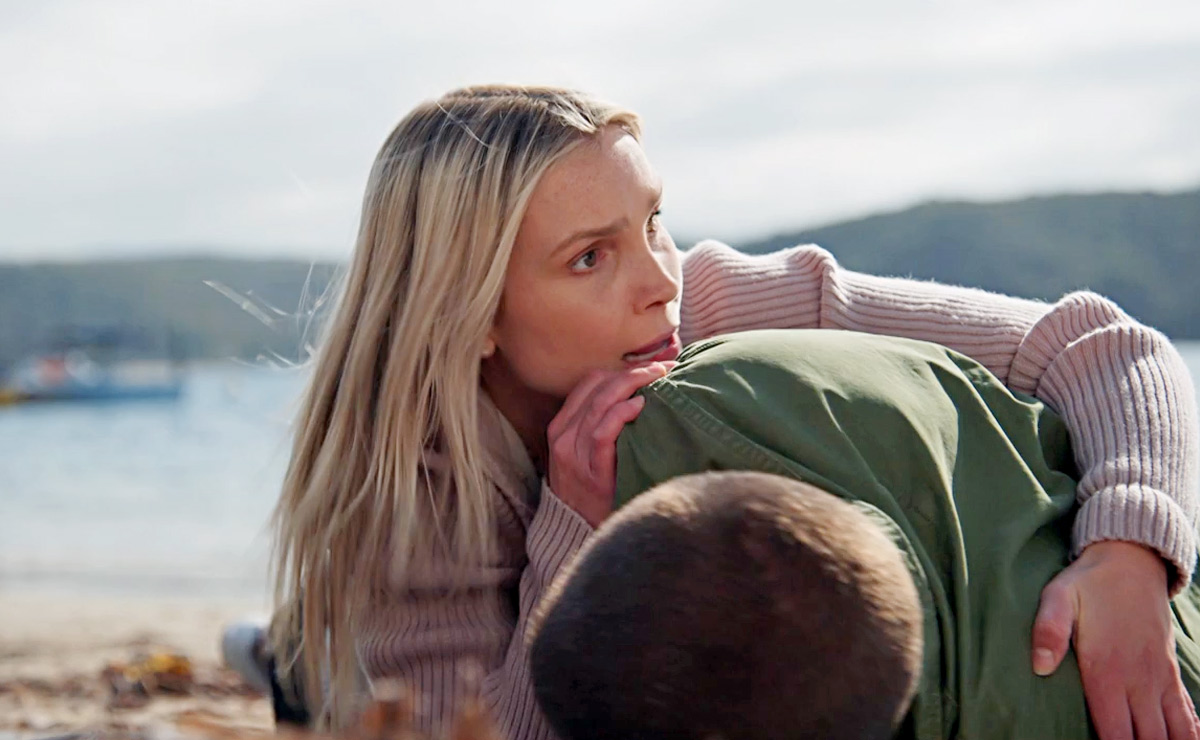 Bella later comments to Mac that she better sleep with one eye open, but that evening it’s Logan’s slipping out of bed to keep checking on Neve that really gets to Mac.

The next day, after taking advice from brother Dean (Patrick O’Connor), Mac finally tells Logan that enough is enough—Neve has to go. Logan is shocked by the ultimatum; does she really want to kick Neve out when she’s at her most vulnerable? Mac tells him that he has to make a choice. 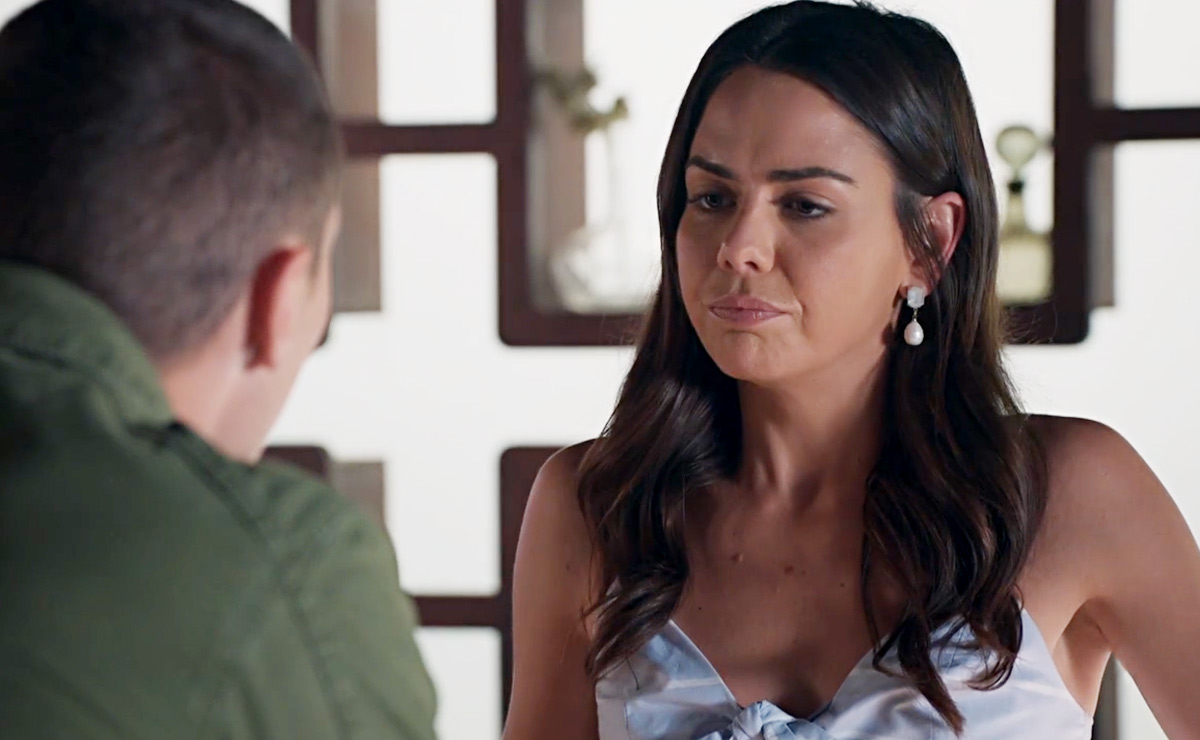 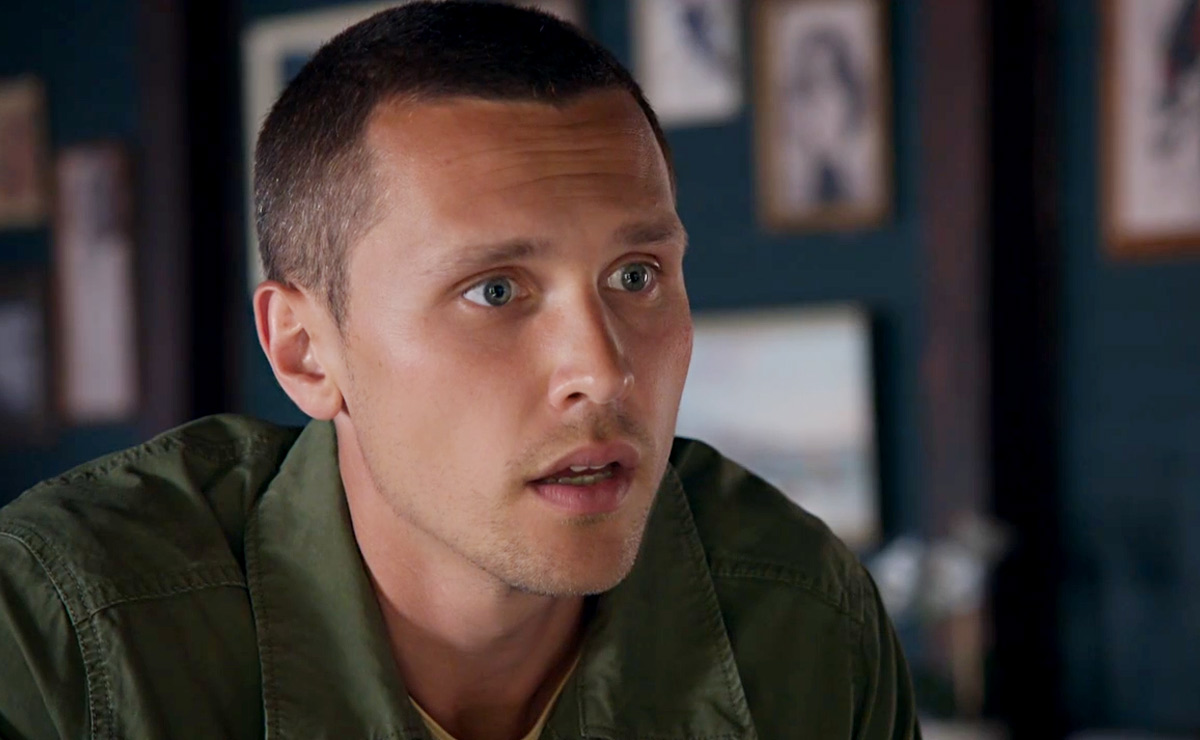 But when Mac returns to the apartment later on, she’s shocked to find both Neve AND Logan’s stuff gone…. Logan has taken Neve to the motel, and is going to sleep on the couch in her room.

Well, that didn’t go to plan! 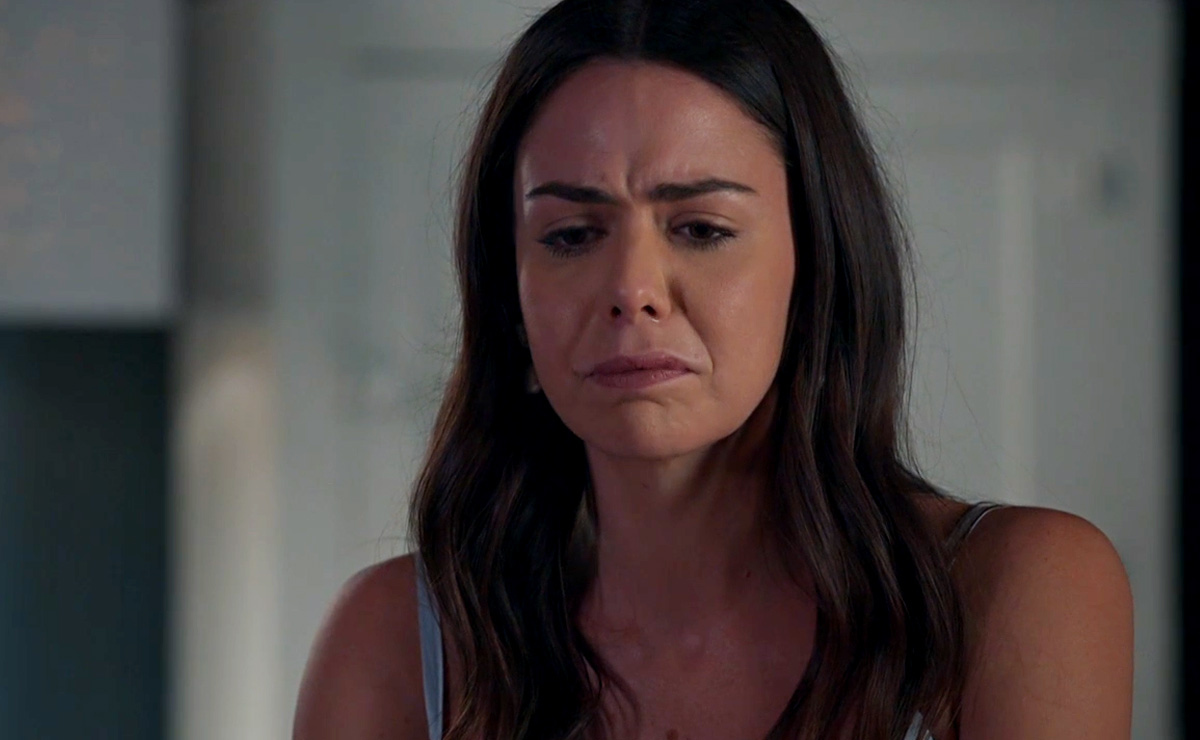 Elsewhere in Summer Bay, both Nikau Parata (Kawakawa Fox-Reo) and Chloe (Sam Barrett) are struggling to cope as Mia vows to plough ahead with wedding plans.

Ari has been on remand for the past two weeks, after covering for Chloe over the death of her father Matthew (James Sweeny).

When Ari was jailed in 2011 for his part in an armed robbery, Mia had taken a 9 year old Chloe and left Ari behind. With Ari having proposed to Mia only days before his recent arrest, Mia wants to ensure that Ari knows she’ll stick by him. As a result, she has decided that they will marry in prison. 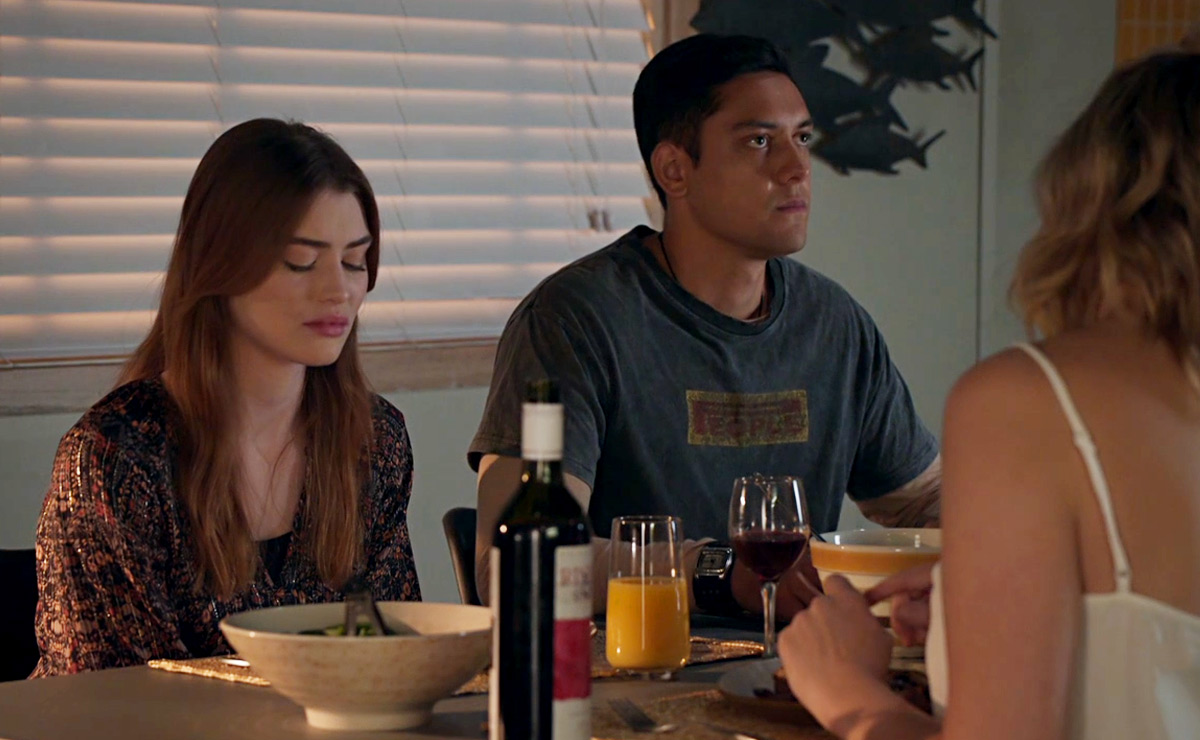 When Mia this week asks her daughter to be a bridesmaid, it upsets Chloe, who is frustrated that Mia is carrying on as if nothing has happened. Nik retreats, fed up of the wedding being forced on them, and he admits to uncle Tane (Ethan Browne) that he’s seriously considering leaving Summer Bay.

He already feels like he’s lost Ari, and he’s not been allowed to see Bella as the family closed ranks whilst awaiting Ari’s sentencing. 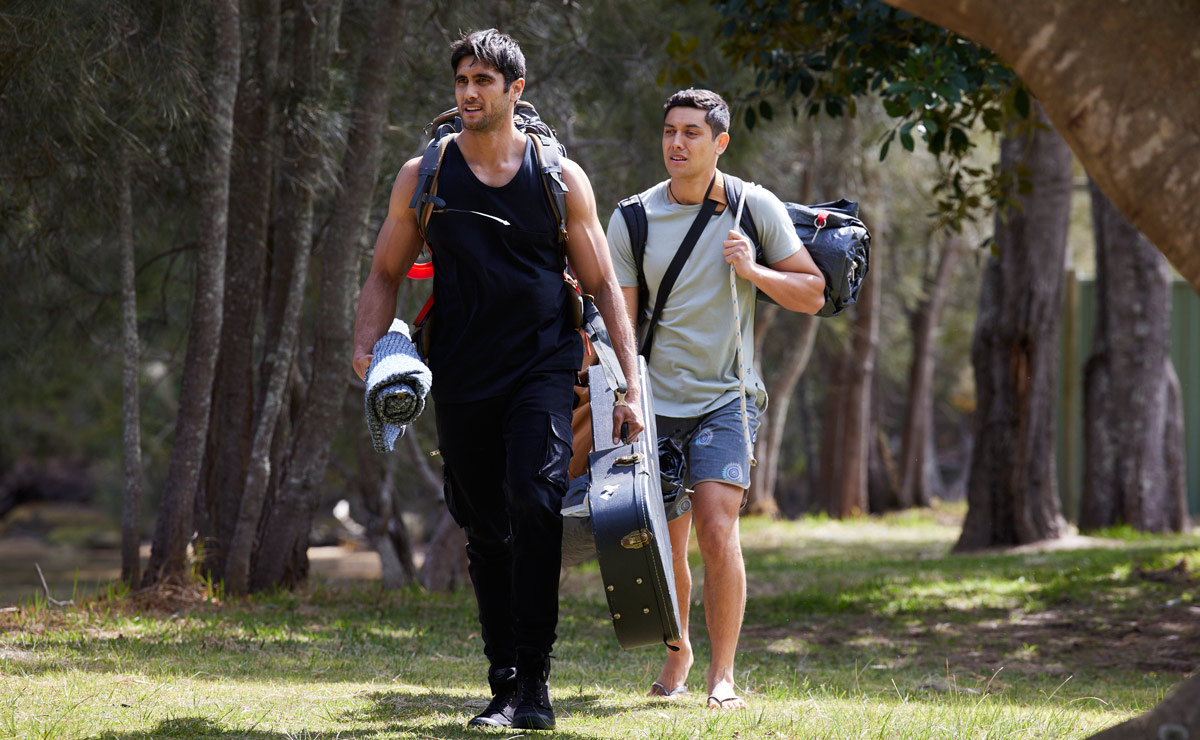 Tane decides to take Nik away for a few days in the hope of getting him out of his funk. Leading him to a secluded bay to set up camp, Tane reveals he has brought with him a taiaha—a Māori weapon used in close combat—which had once belonged to Nik’s late father Mikaere. 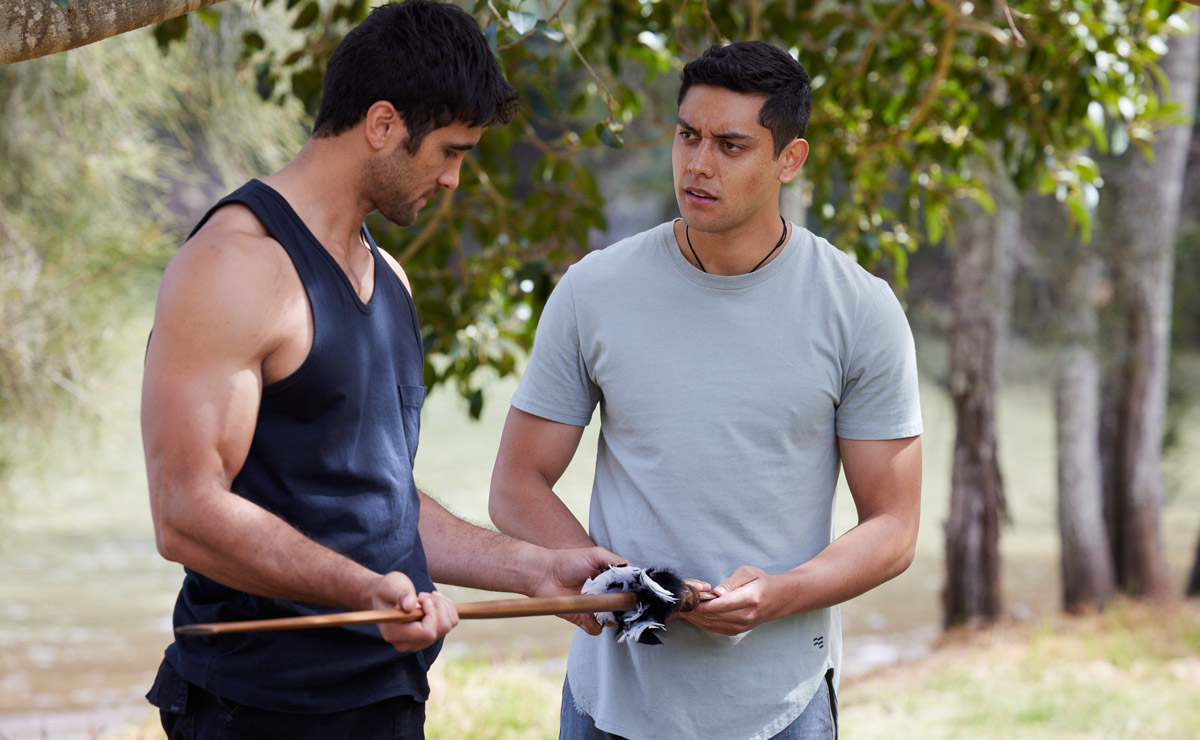 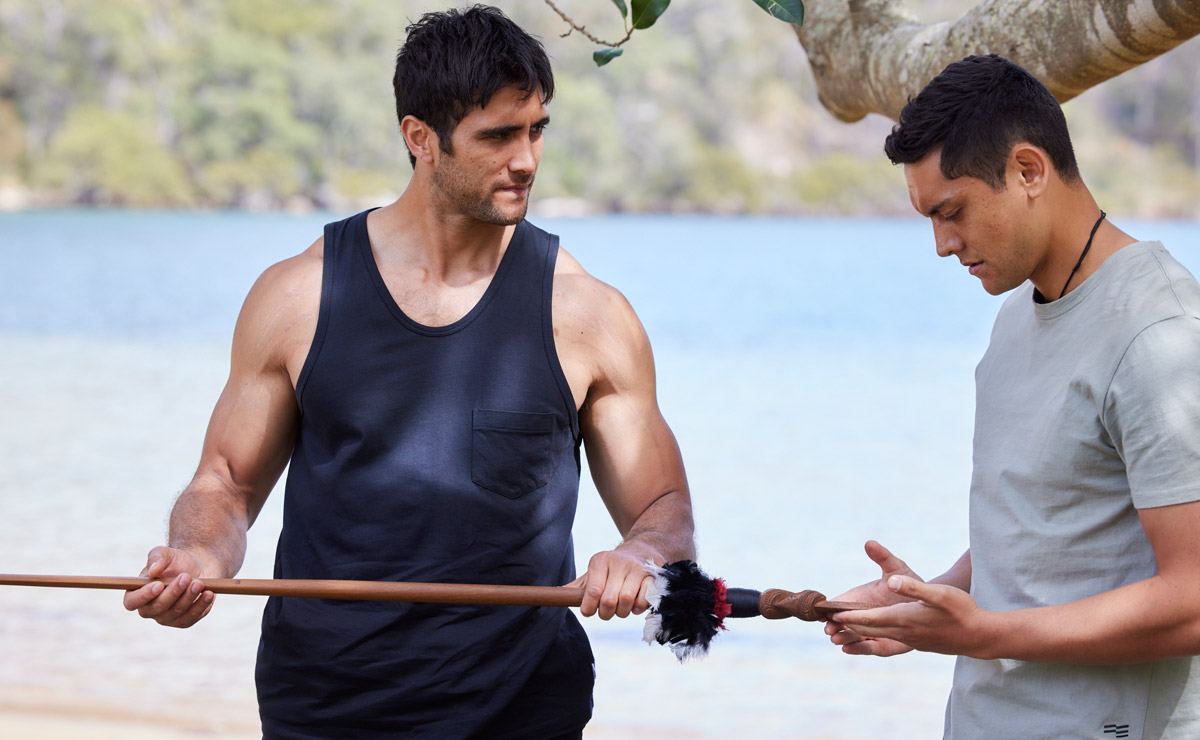 But it’s not as simple as handing it over to Nik—Tane tells him that he has to earn it. In teaching Nik the ways of the taiaha, Tane hopes that it will uncover his inner warrior.

Tane goes on to explain that the taiaha is the embodiment of their ancestors, and mastering it will enable Nik to carry them with him to provide spiritual guidance as he goes through difficult times. 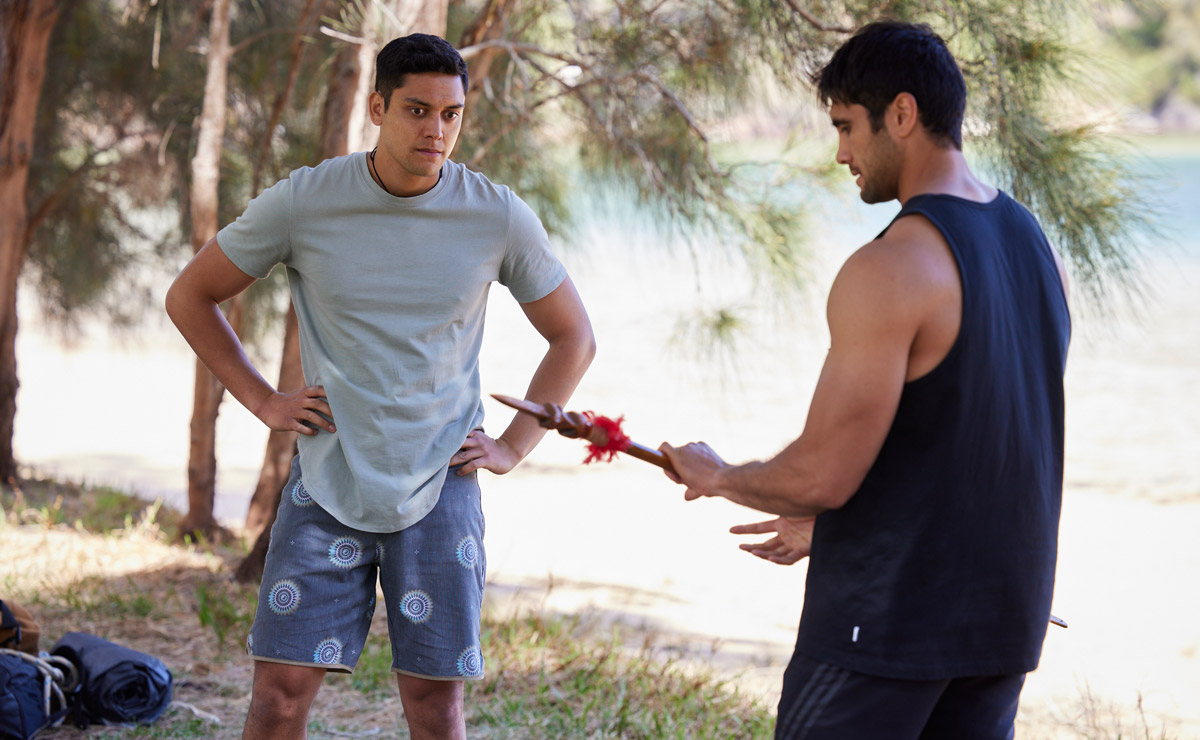 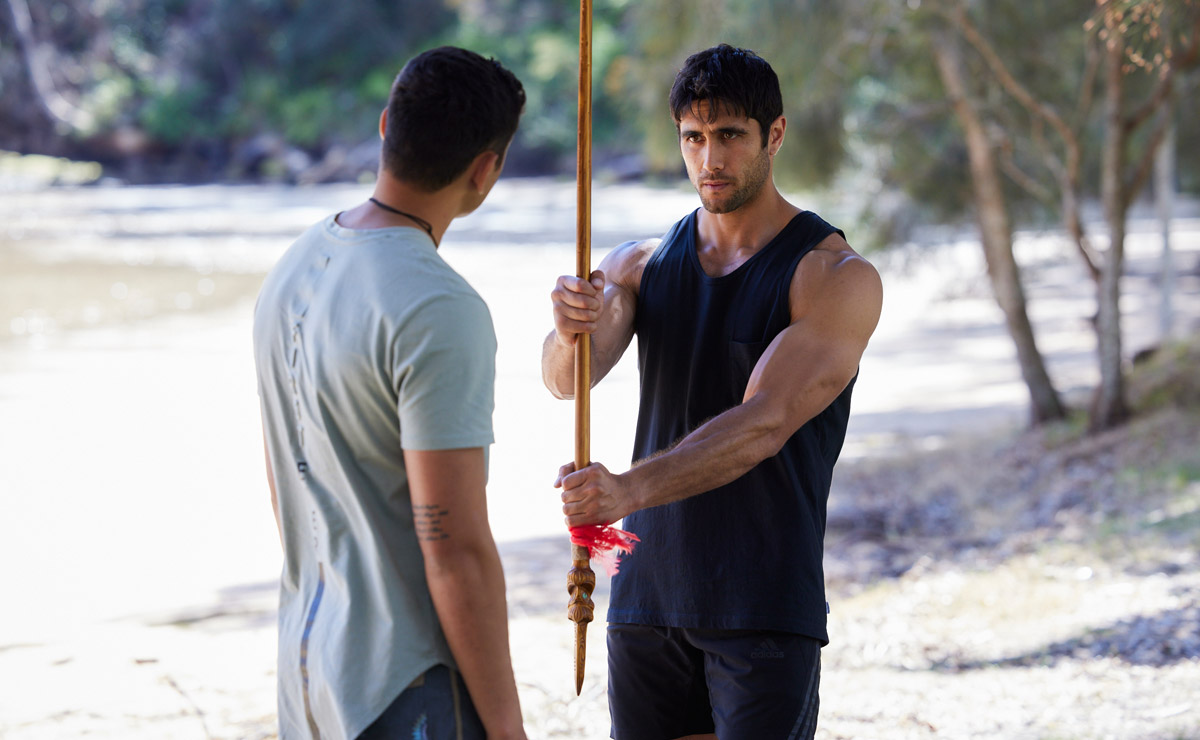 Tane begins to go through the moves and Nik looks as though he’s picking it up quite easily. 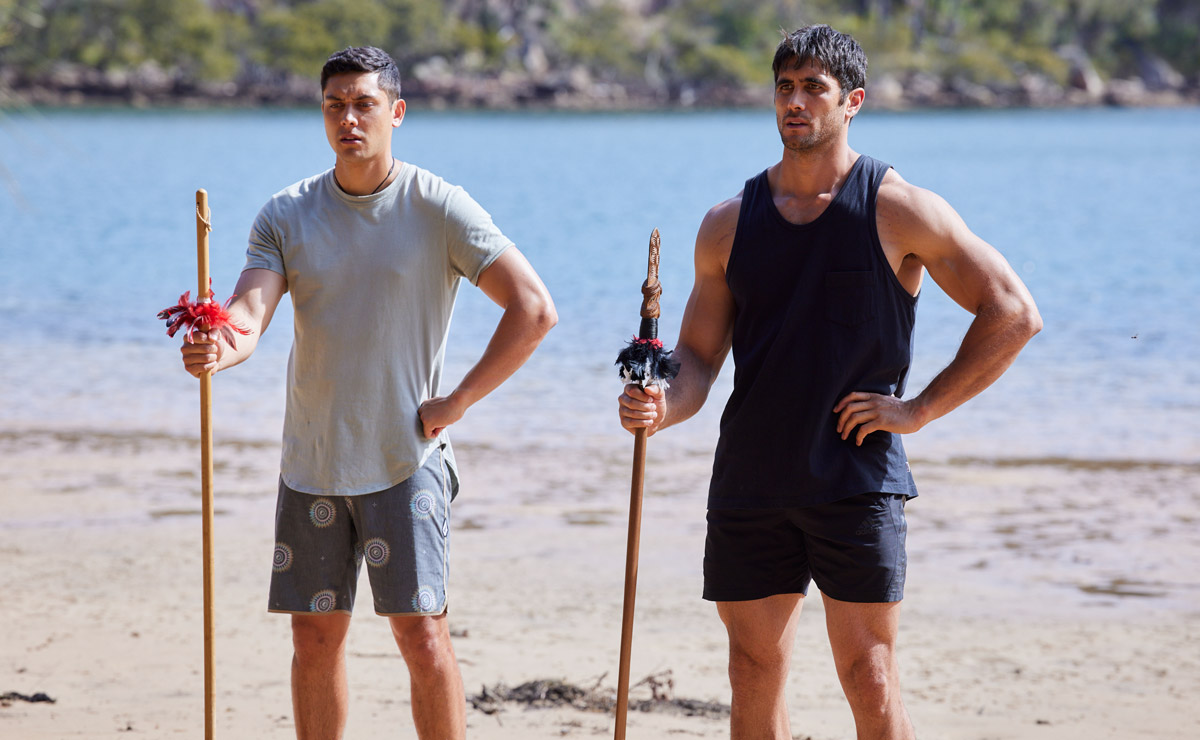 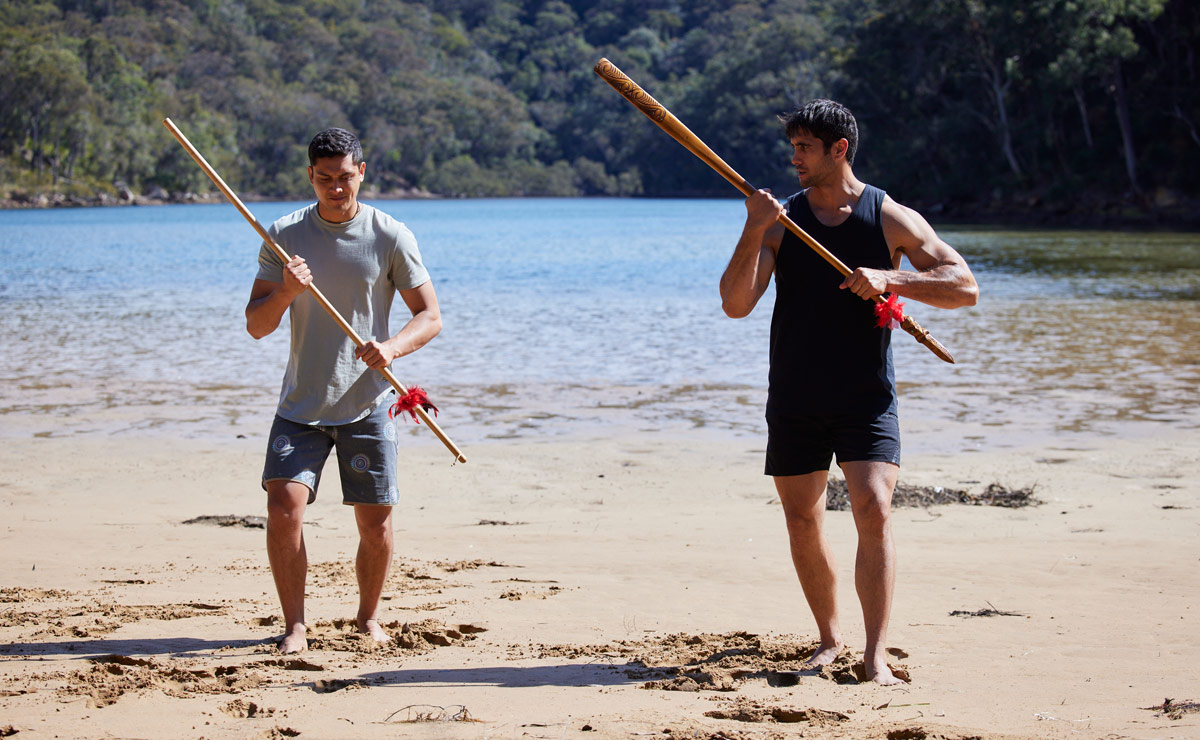 But as time progresses, Tane pushes Nik harder, and Nik begins to become more and more frustrated with himself.

Tane reiterates that the taiaha requires patience, but Nik walks away in defeat, telling Tane that he’s no warrior. 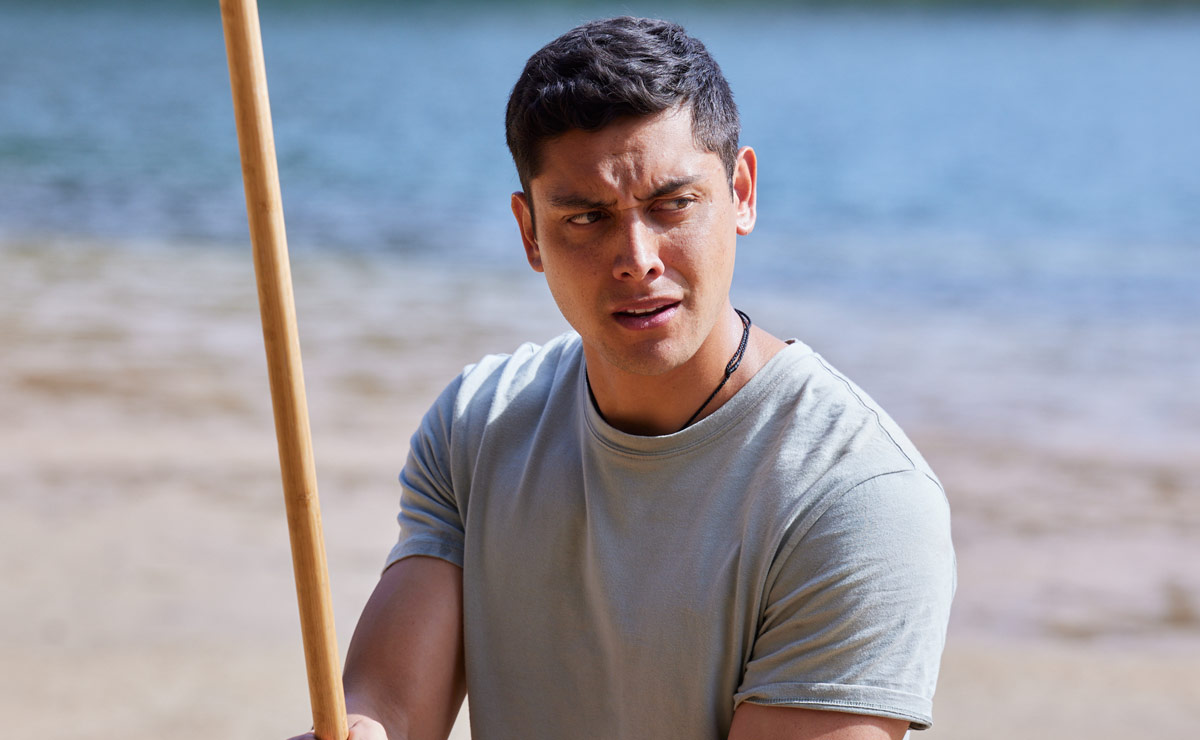 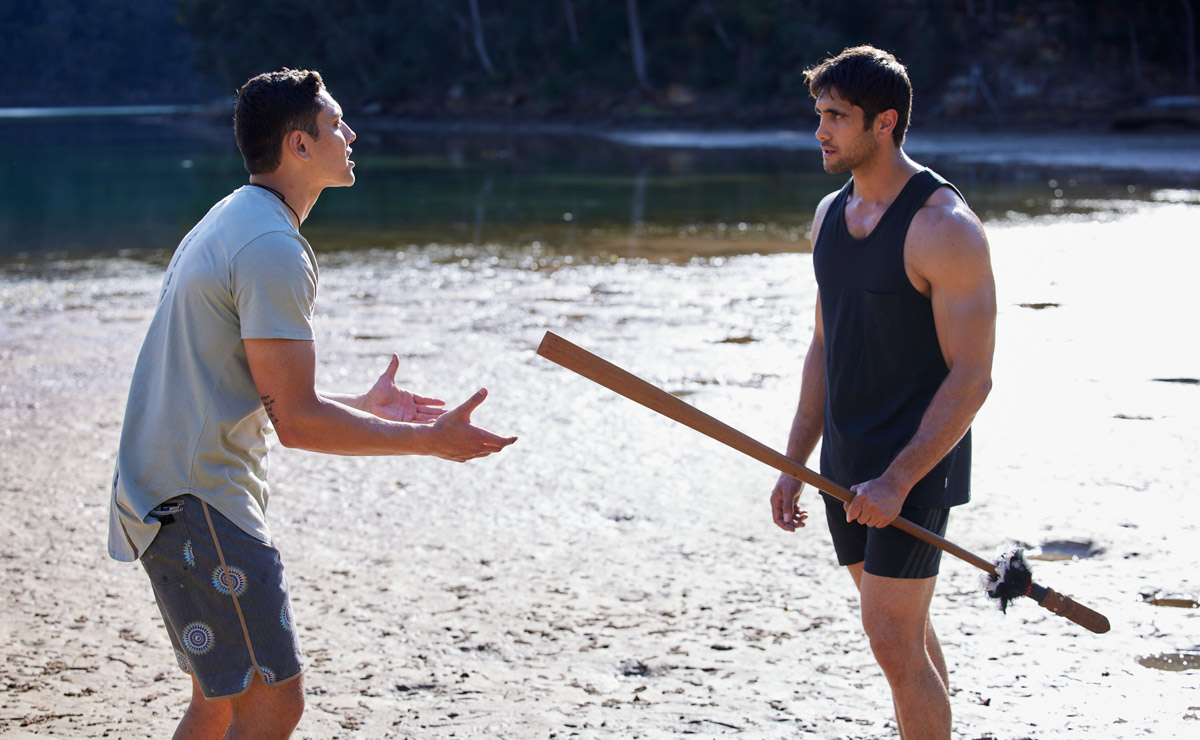 When Nik later returns to find Tane going through his own moves, he suddenly finds himself inspired—will Nik give it another chance? 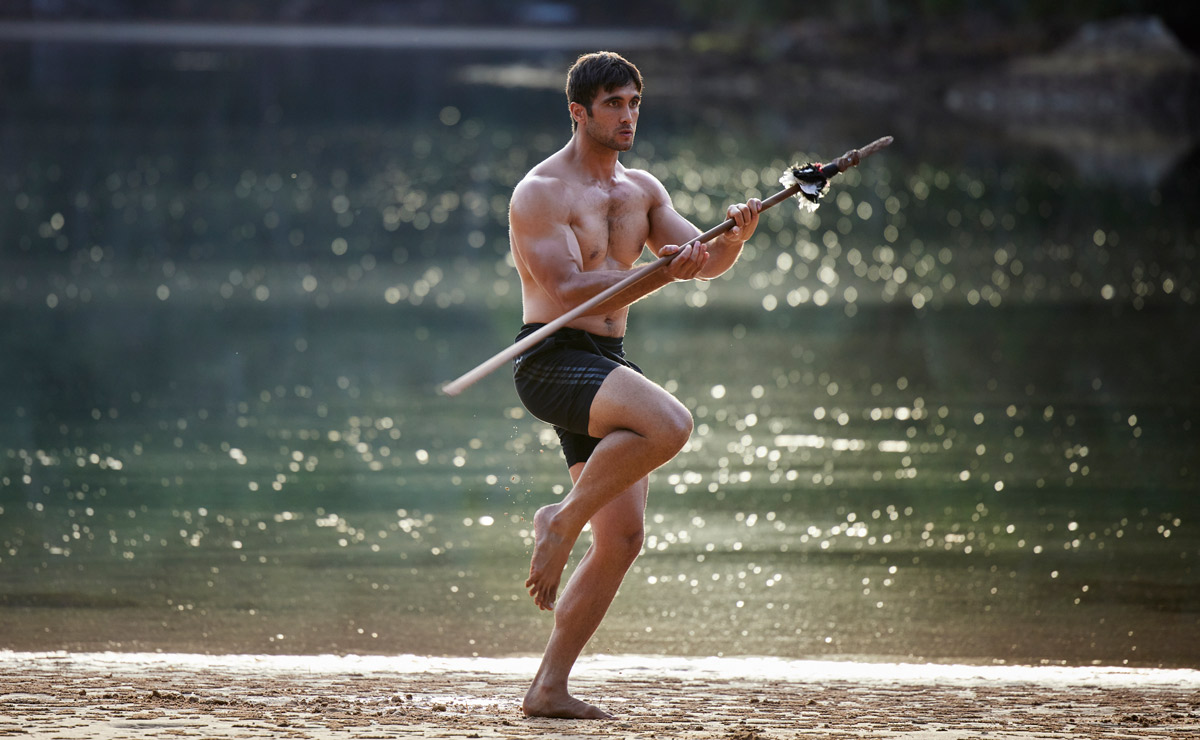 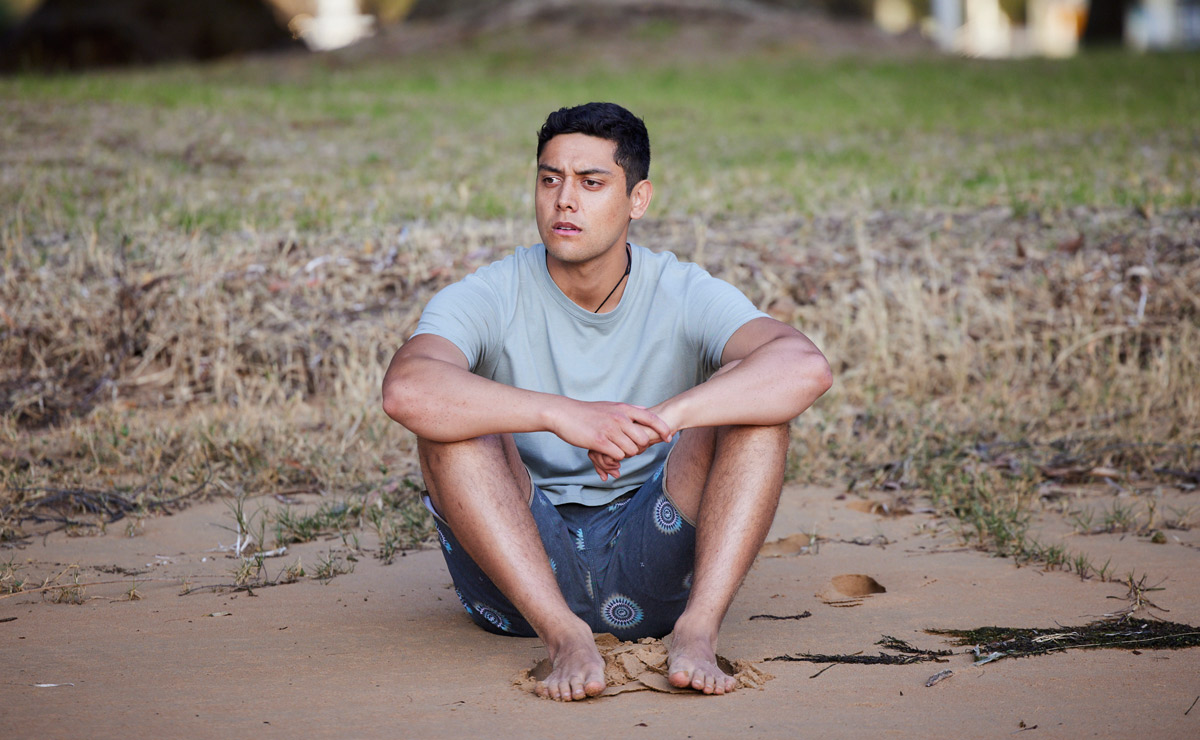 “I obviously knew what it was because I’m Māori, but I never really did taiaha itself,” Ethan Browne told Stuff NZ. “We did a little bit of mau rakau (weapon-based Māori martial arts) at high school, so when the storyline came up, I had to reach out to a few friends and they helped me out.”

“There’s always been a great response to anything cultural we do,” Ethan added. “(Viewers) love it because it’s something new to them – and it’s not the same old running-on-the-beach stuff.” 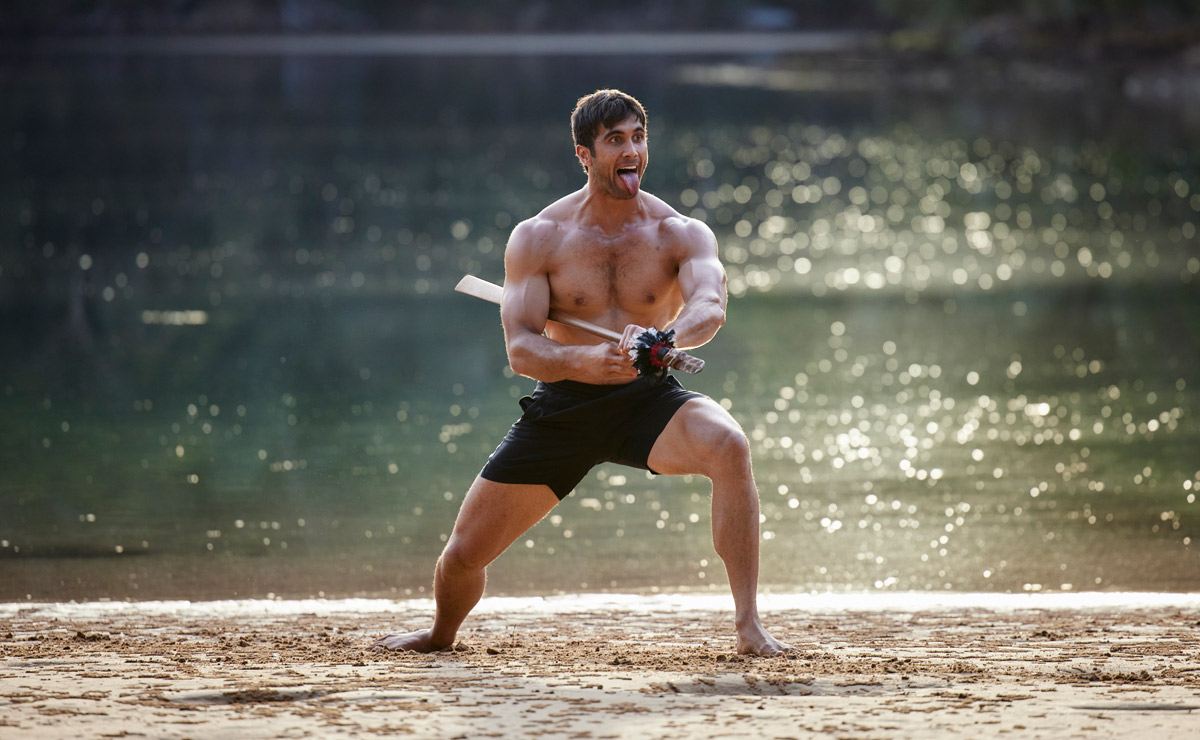 “As for fellow Māori, I hope we do them justice. There’s probably little nuances that I might have missed, or really highly trained fellas watching it, they might be like, ‘Oh, what’s that?’ Maybe not, hopefully.” 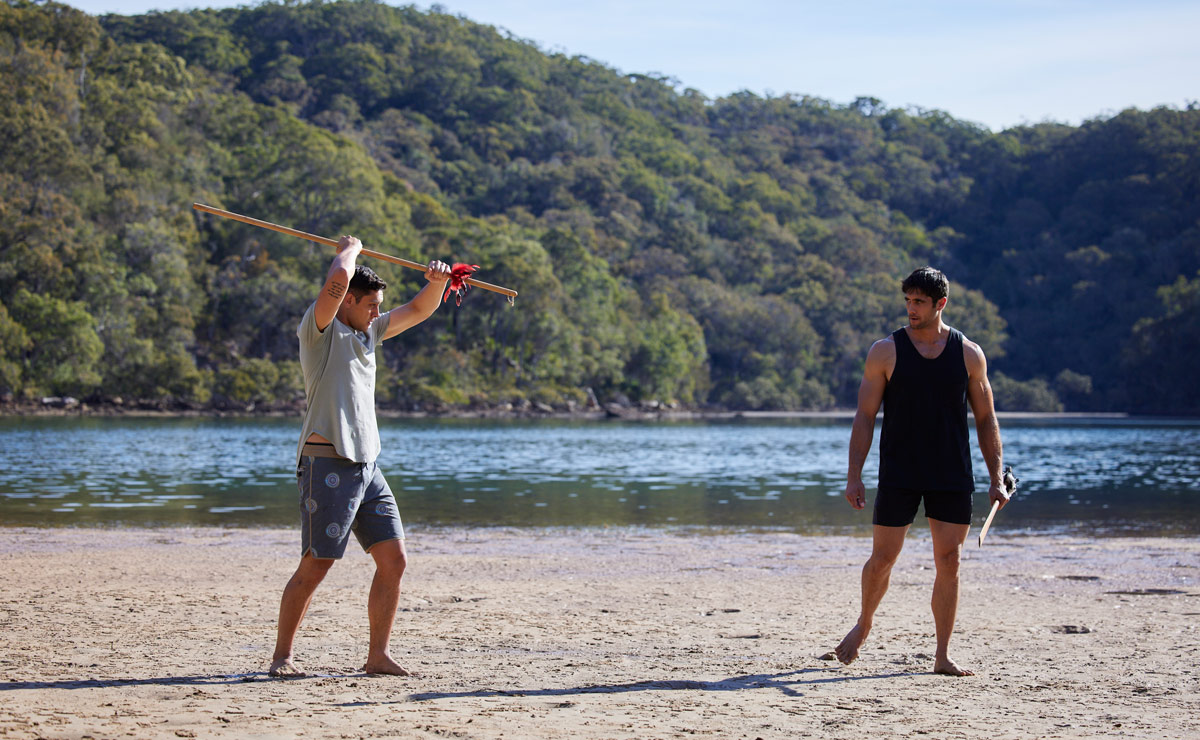 Although the show has featured the Paratas’ Māori culture before, Kawakawa realises that may still be largely unfamiliar to Home and Away fans. “For many people, it’s their first contact with what it is like to be to be Māori and I’m grateful to be a part of that” he told Stuff NZ.

“But it’s just the tip of the iceberg. I want to make it really clear that there are so many more things that are just as rich and there’s so much to offer that we haven’t shown on the show.” 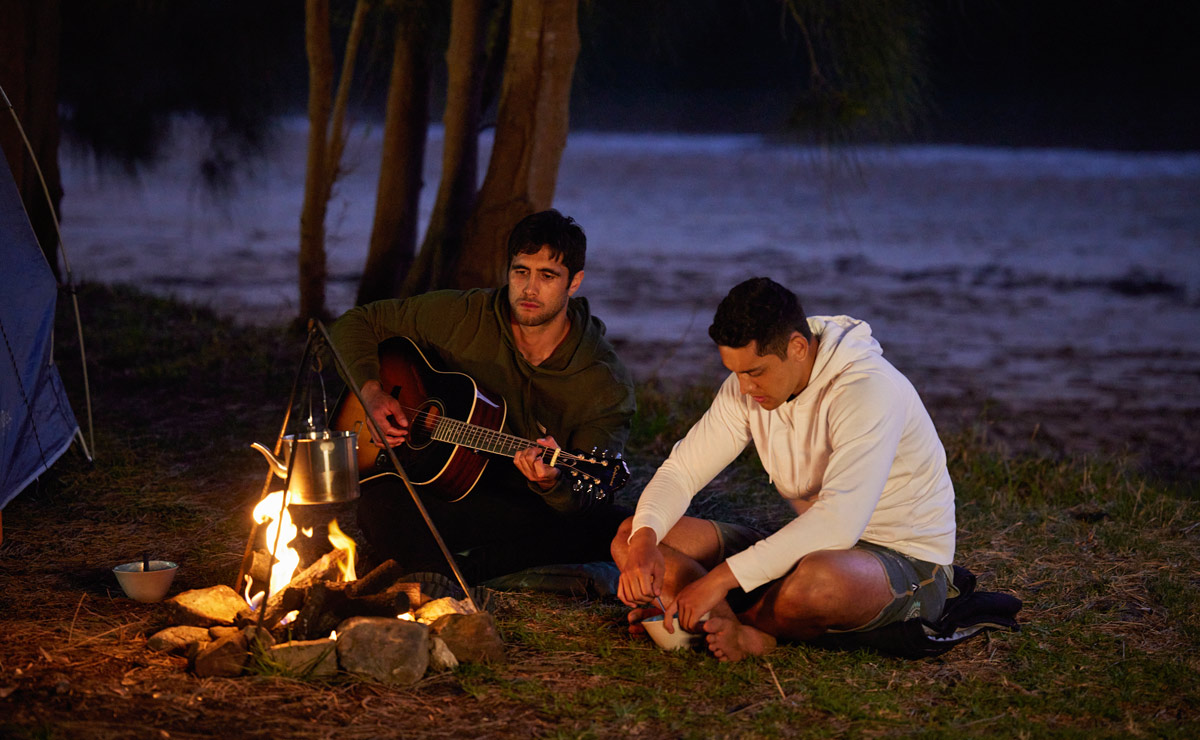