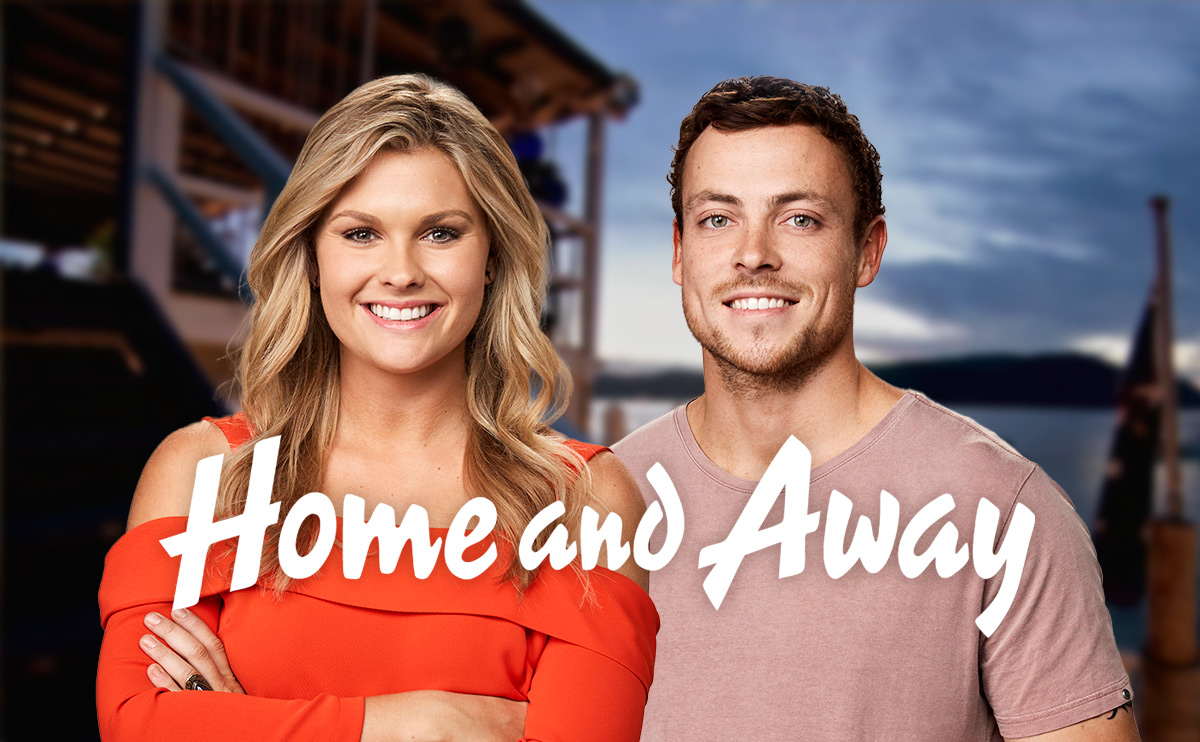 Coming up next week on Home and Away in the UK, Dean is forced to take action against Ziggy when her first surfing class goes horribly wrong, whilst Ryder makes a very costly mistake that could threaten his and Chloe’s business…

It’s taken a long time, and a lot of rehab, for Dean Thompson (Patrick O’Connor) to get back on his feet and return to work following his horror car smash, but his first day back didn’t go as planned last week.

Whilst he was only limiting himself to light duties, on girlfriend Ziggy’s (Sophie Dillman) orders, Dean still managed to injure himself when he tried to break up an argument between Chloe (Sam Barrett) and Bella (Courtney Miller) and got knocked over. 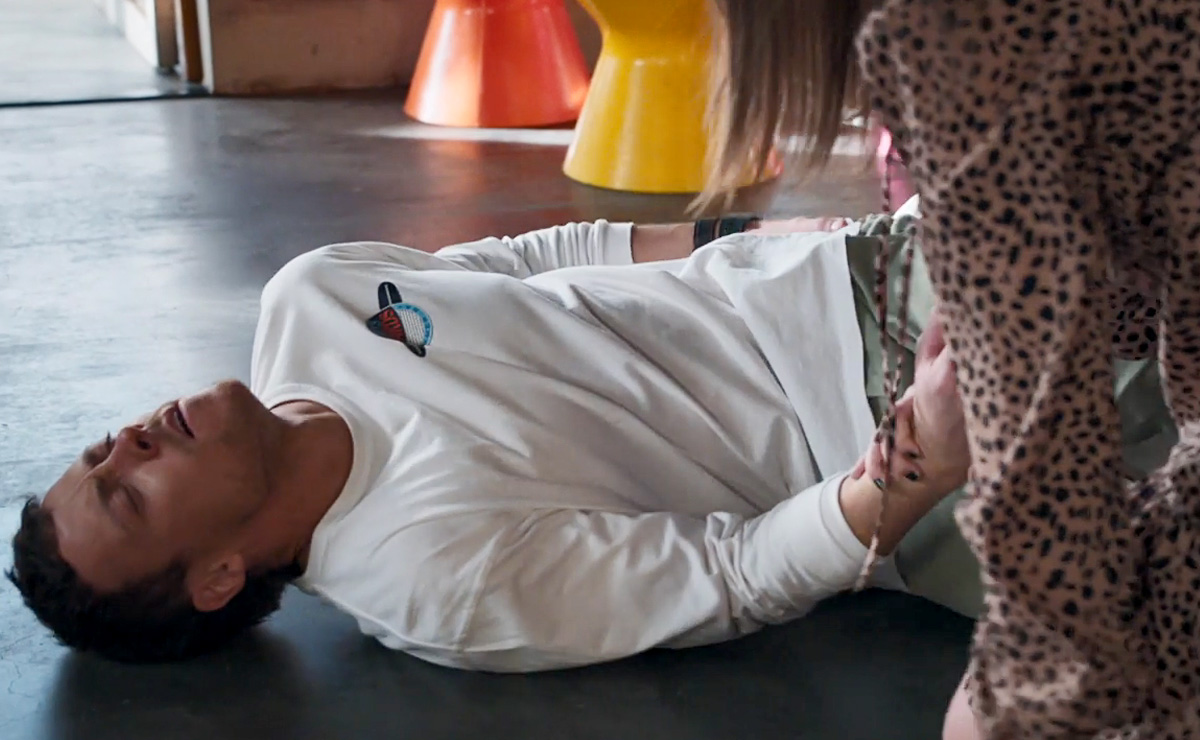 Although Dean insisted to Ziggy that he was fine and that returning to work wouldn’t set back his recovery, he soon found that even confining himself to admin was becoming something of a nightmare.

Nikau Parata (Kawakawa Fox-Reo) has been helping out by running the board shop in Dean’s absence, and was able to take advantage of the large online presence from his modelling days by promoting the board shop on his social media accounts.

Unfortunately, whilst the extra business from Nik’s advertising provided the customers they needed, it meant that Dean was struggling to find enough instructors to cover all of the extra surfing lessons. 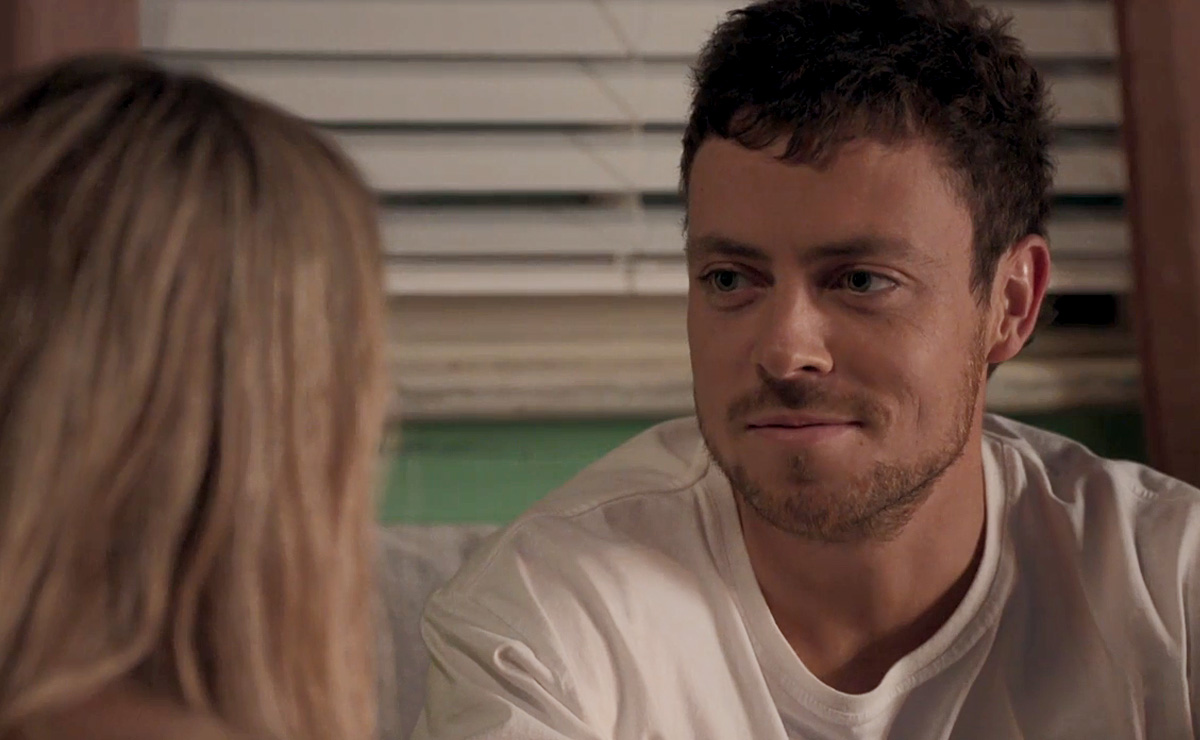 Although she has had her hands full with her own job, fellow champion surfer Ziggy saw the perfect opportunity to help out and volunteered to take some classes. Although Dean was reluctant, he knew Ziggy wouldn’t take no for an answer, so accepted her offer.

This week, an eager Ziggy turns up for her first lesson to find Dean and John (Shane Withington) waiting for her. John is quite surprised to hear of the latest development, noting that surfing and teaching are two entirely different things, and whilst Ziggy notes his lack of confidence in her, she assures them both that it’ll be no problem. 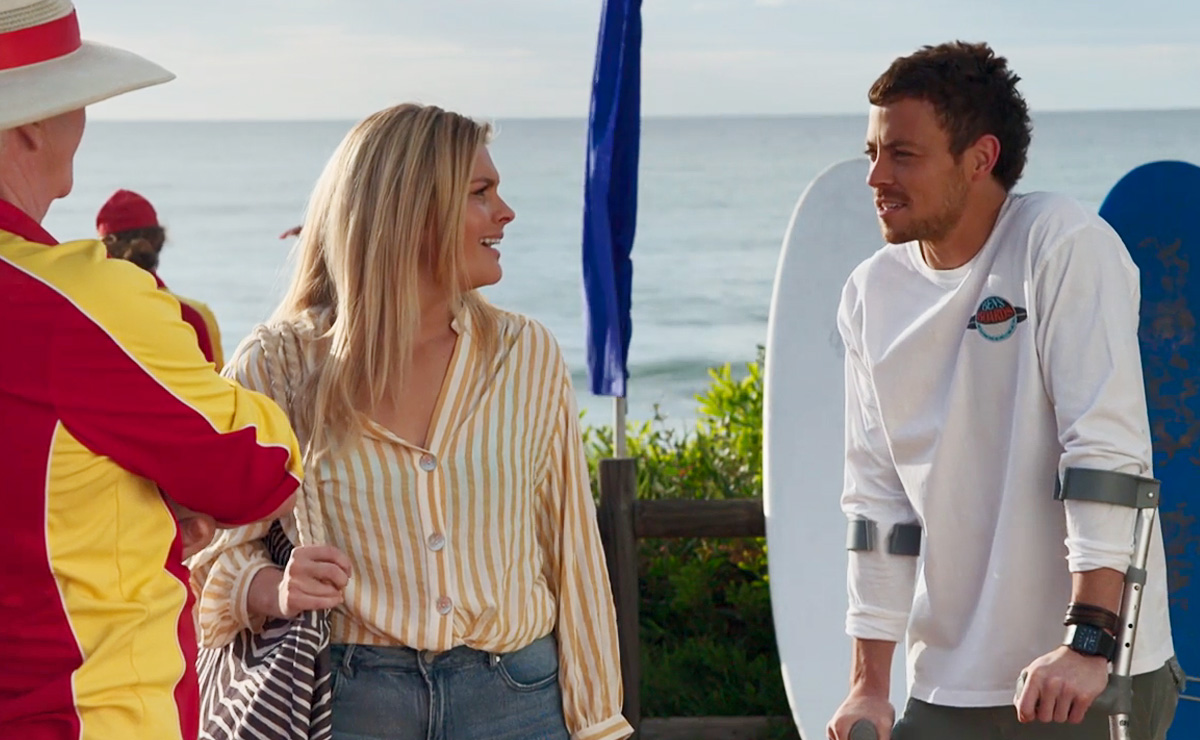 Meanwhile, Ziggy’s first two students, Lissa (Ashleigh Rubenach) and Jess (Chiara Osborn), arrive at the board shop and are clearly excited to see Nikau behind the counter.

He books them in and tells them that their instructor will be along momentarily, to which the girls are quick to express their disappointment—isn’t Nik taking the class? They explain that they’d only signed up because Nik was there, and he uneasily agrees to take a selfie with them. 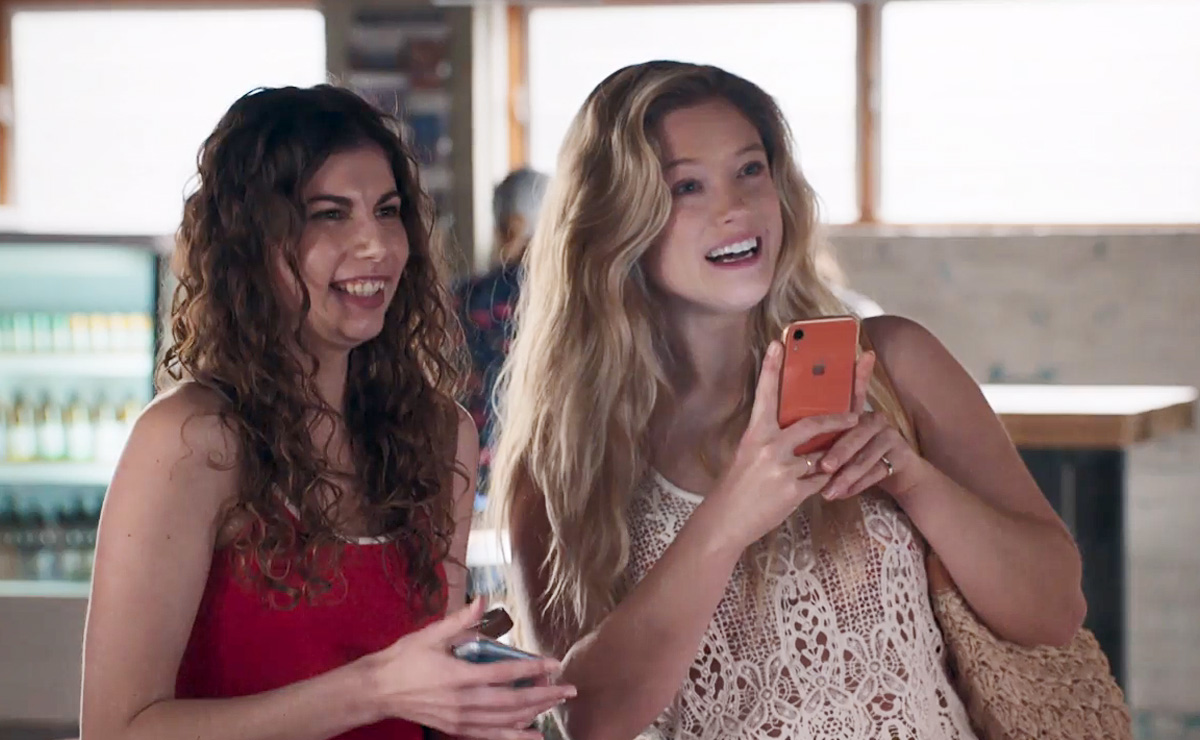 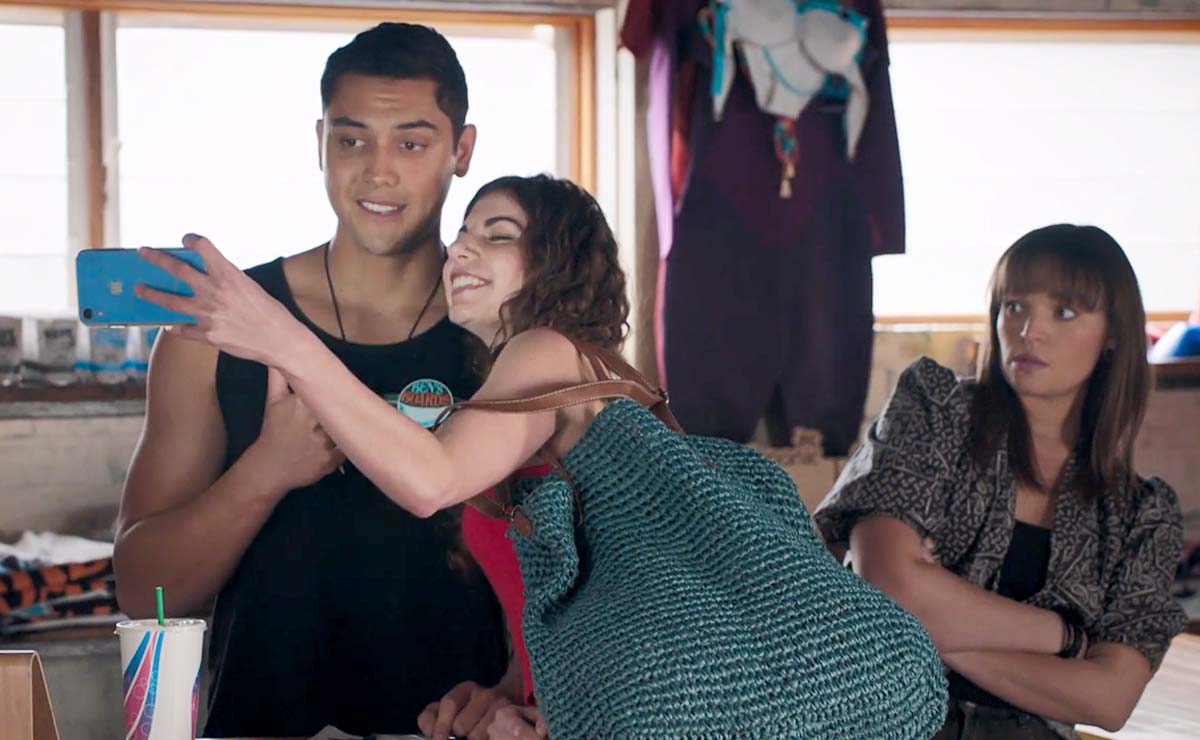 When Dean and Ziggy arrive, Ziggy takes the now reluctant students outside, but Nik ends up following when Dean sends him out in order to keep an eye on Ziggy.

The lesson doesn’t go well, with Lissa and Jess more interested in fawning over Nik and taking pics of him than listening to what Ziggy is actually telling them. 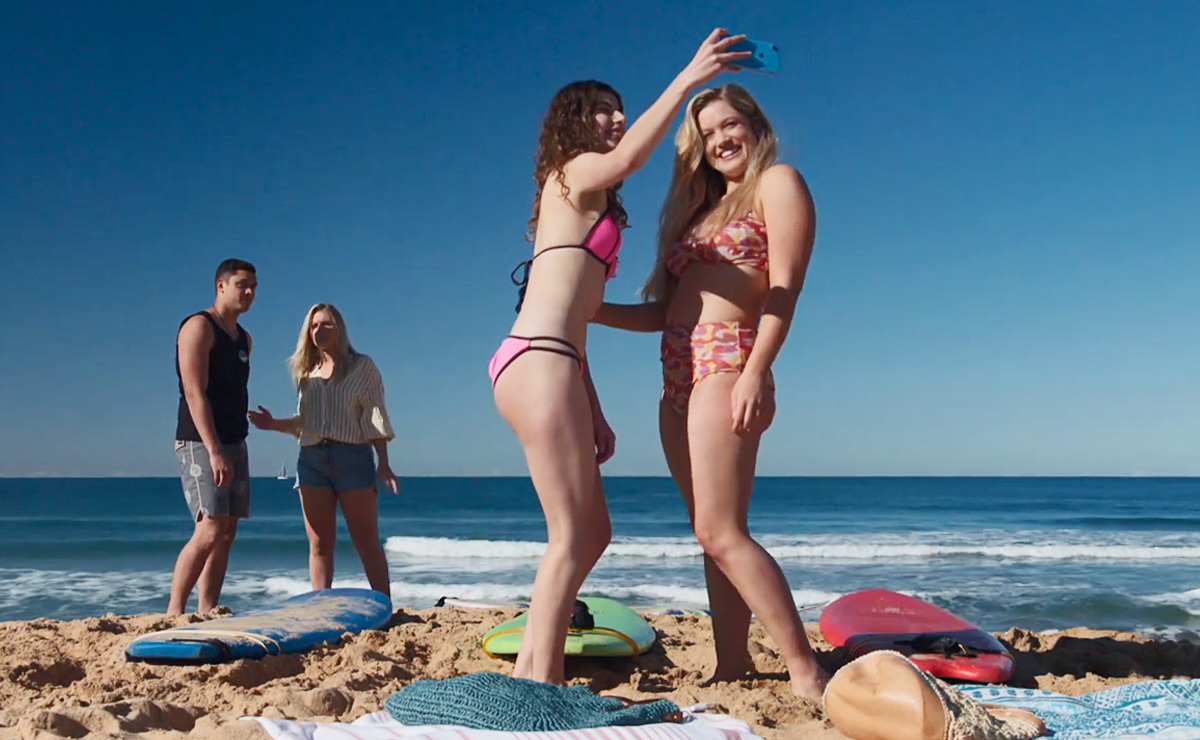 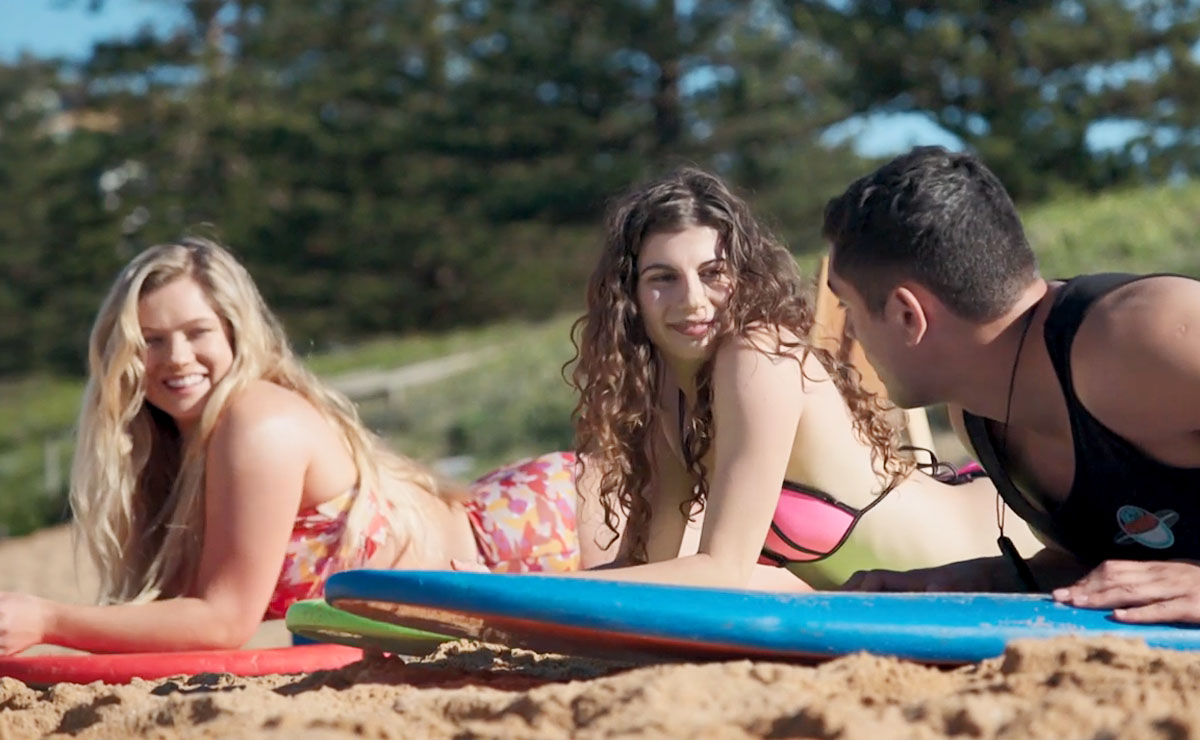 As Ziggy becomes more and more frustrated, she comes to the conclusion that the girls will be forced to pay more attention if she takes them straight out onto the water to learn instead.

Nik expresses his concern over the plan, knowing that Dean always sticks to the sand on his first lesson, but Ziggy insists that it’s the only way. 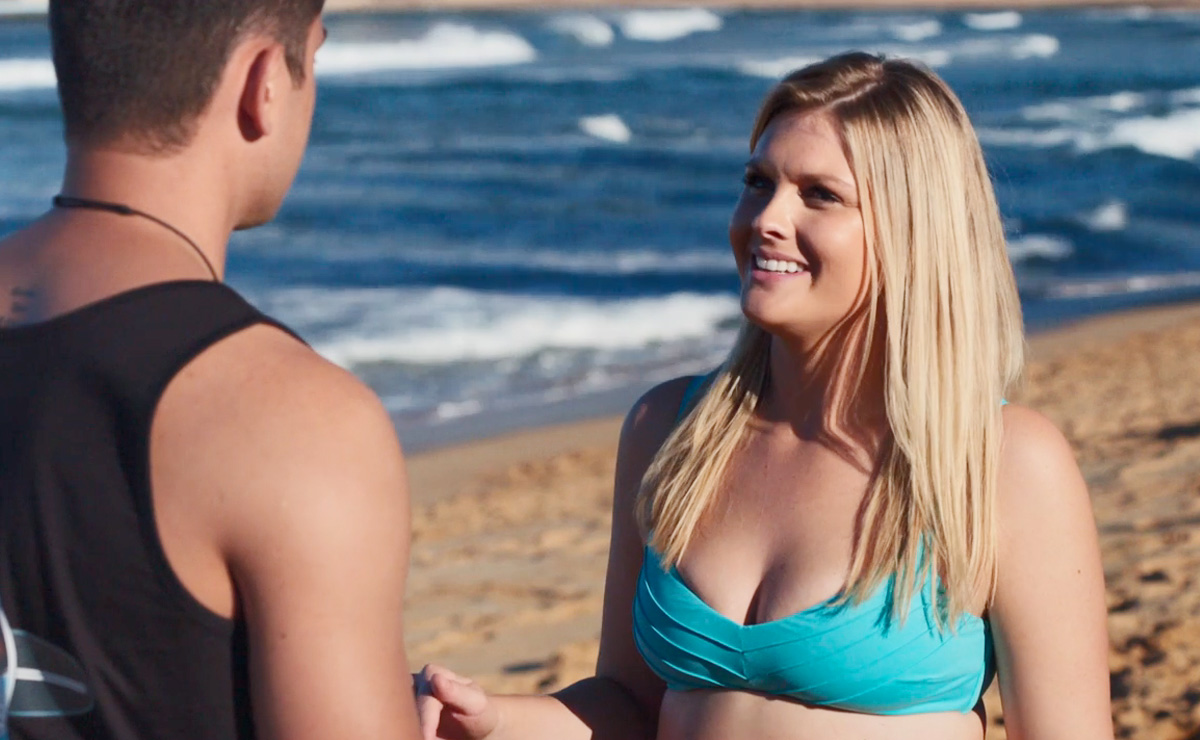 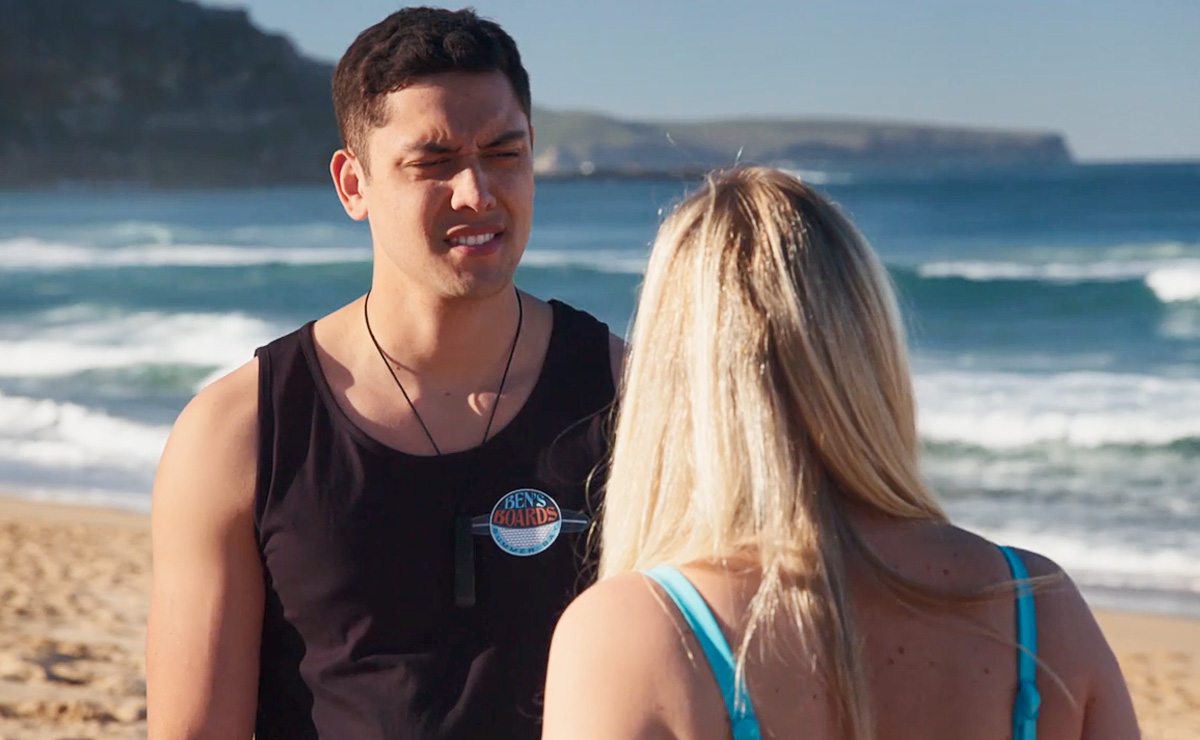 Unfortunately, it seems Dean sticks to dry land for good reason. Ziggy’s plan goes awry when one of the girls gets hit on the head by one of the boards, and Nik is forced to carry her in his arms to the shoreline, much to both girls’ delight. 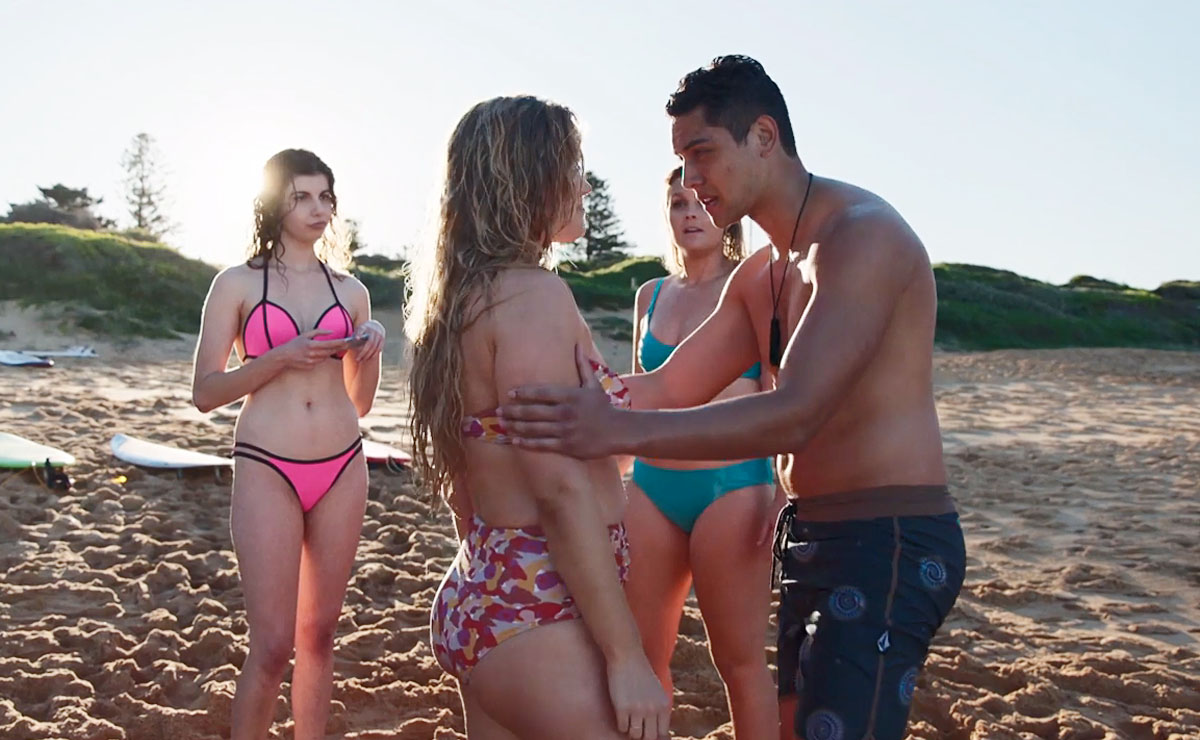 Ziggy begs Nik not to tell Dean about what happened, and whilst he agrees to keep quiet, the game is up when Lissa and Jess plaster pics of Nik’s ‘rescue’ all over their social media pages, where Dean quickly spots it. 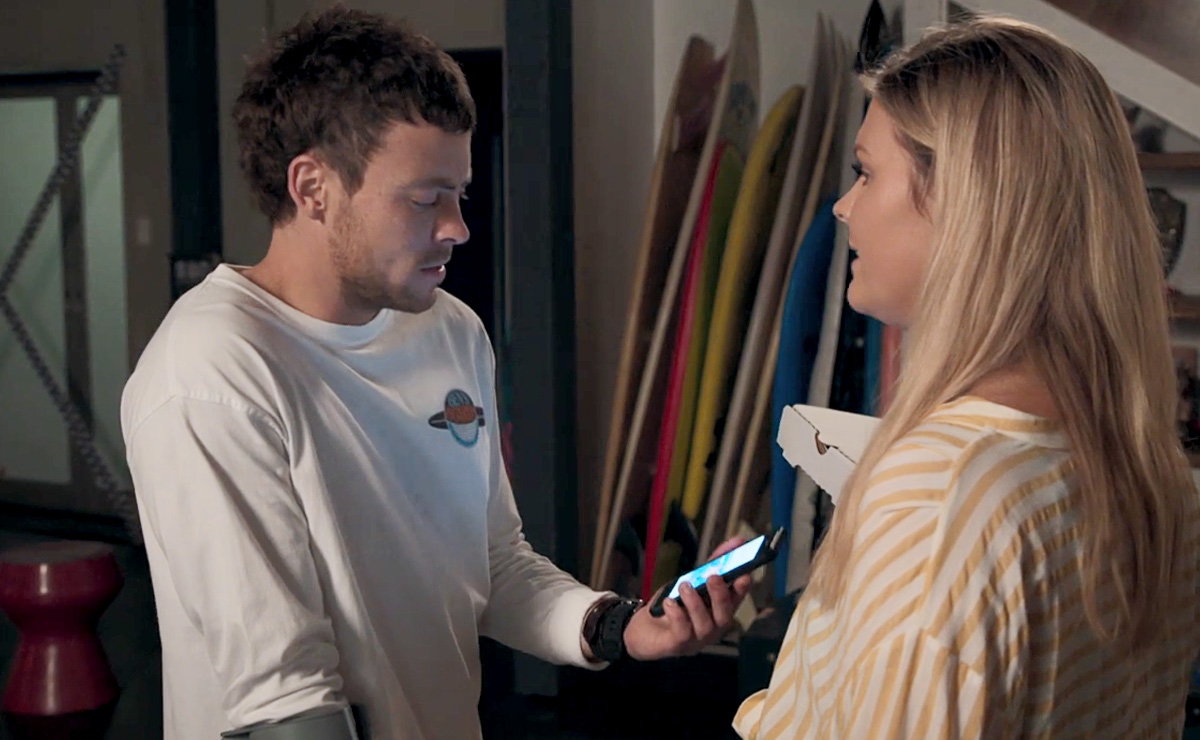 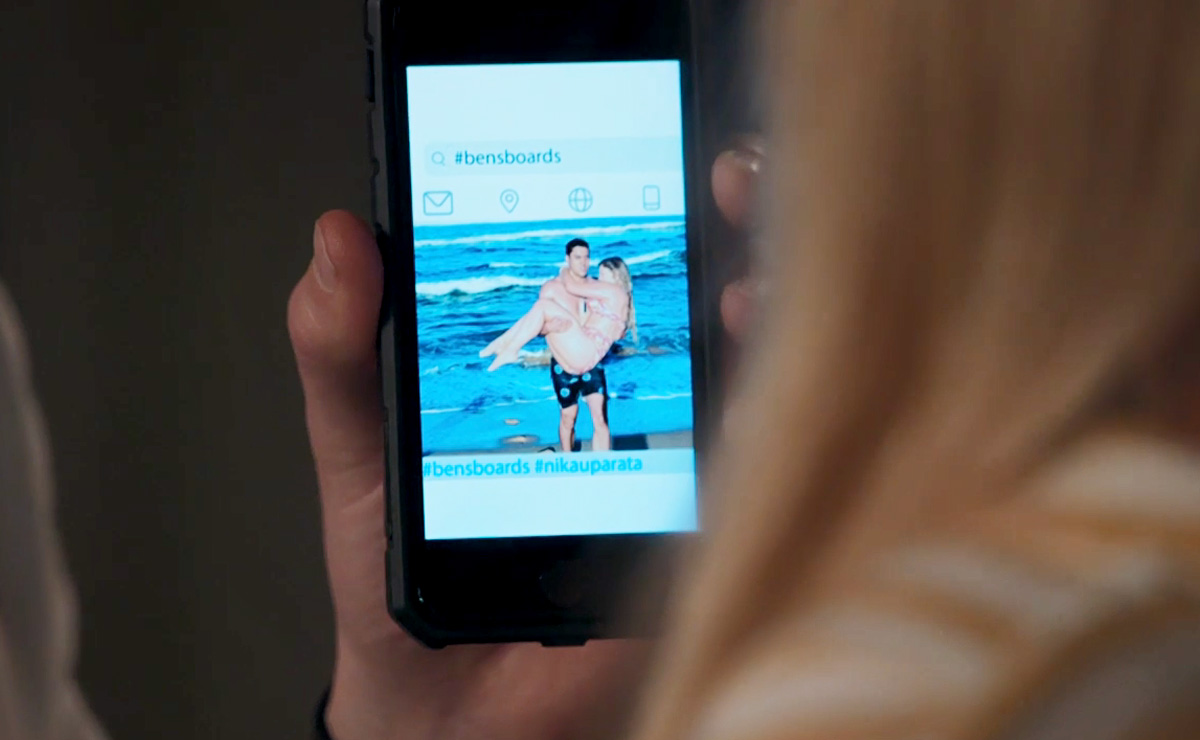 The next morning, Ziggy is trying to play down the incident when John approaches with an incident form for Dean to fill in—as surf club manager, he has eyes and ears everywhere! 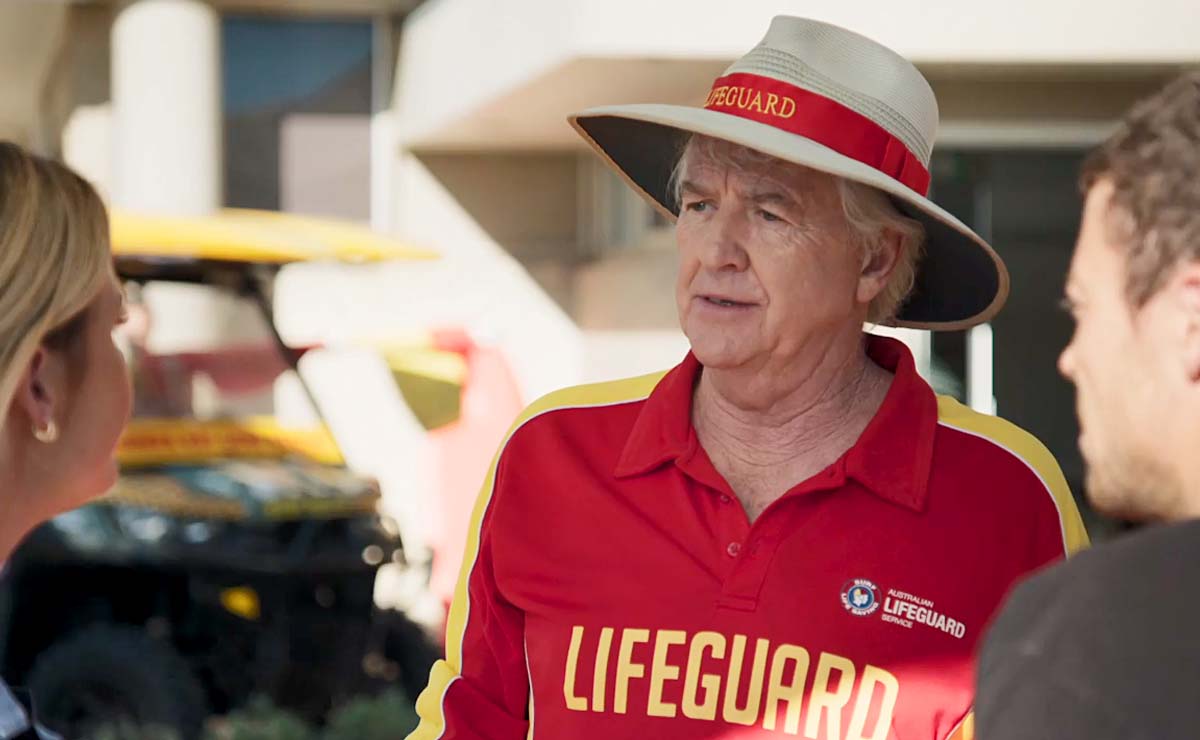 When Ziggy’s out the way, John explains to Dean that the surf club can’t afford to have any more incidents like that, particularly if it means the club’s lifeguards have to get involved.

Whilst Ziggy might be a good surfer, that doesn’t necessarily mean she’s a good teacher, and he tells Dean that he really should be looking elsewhere.

Dean knows that John is right—Ziggy needs to go, but how on earth can he sack his own girlfriend?

Later that day, Dean finally plucks up the courage to tell Ziggy that she’s fired…. and it’s safe to say that her response comes completely out of left field! 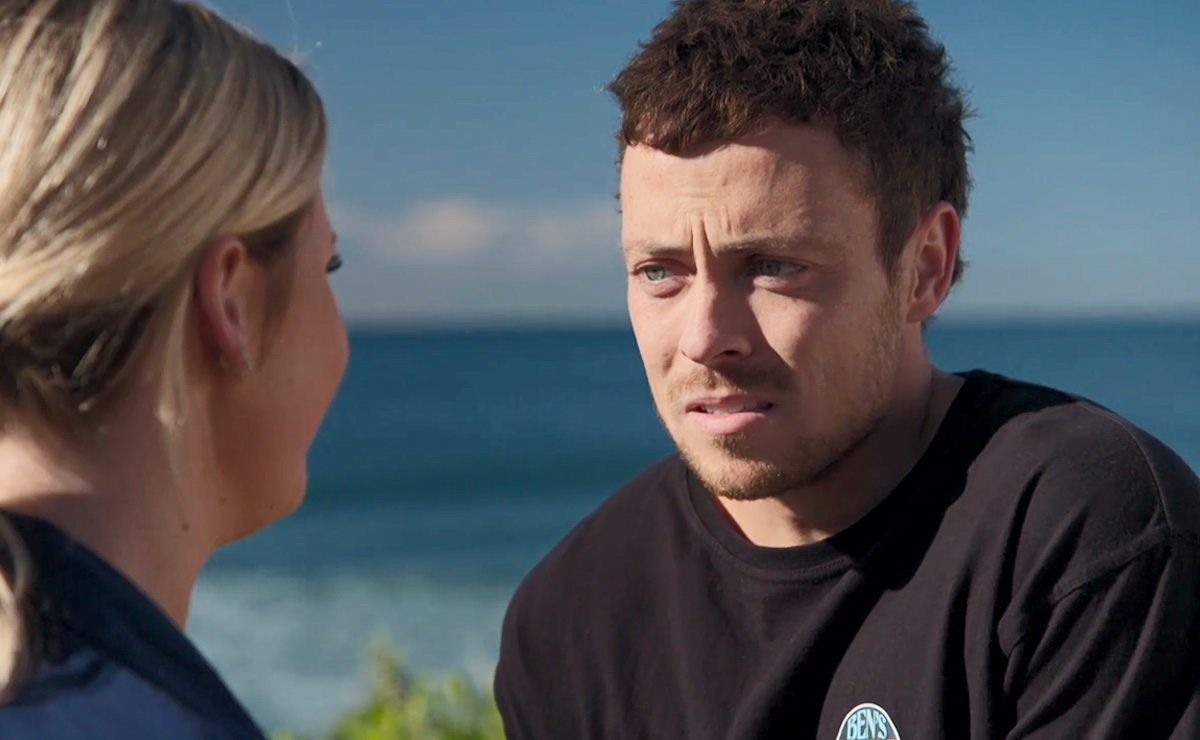 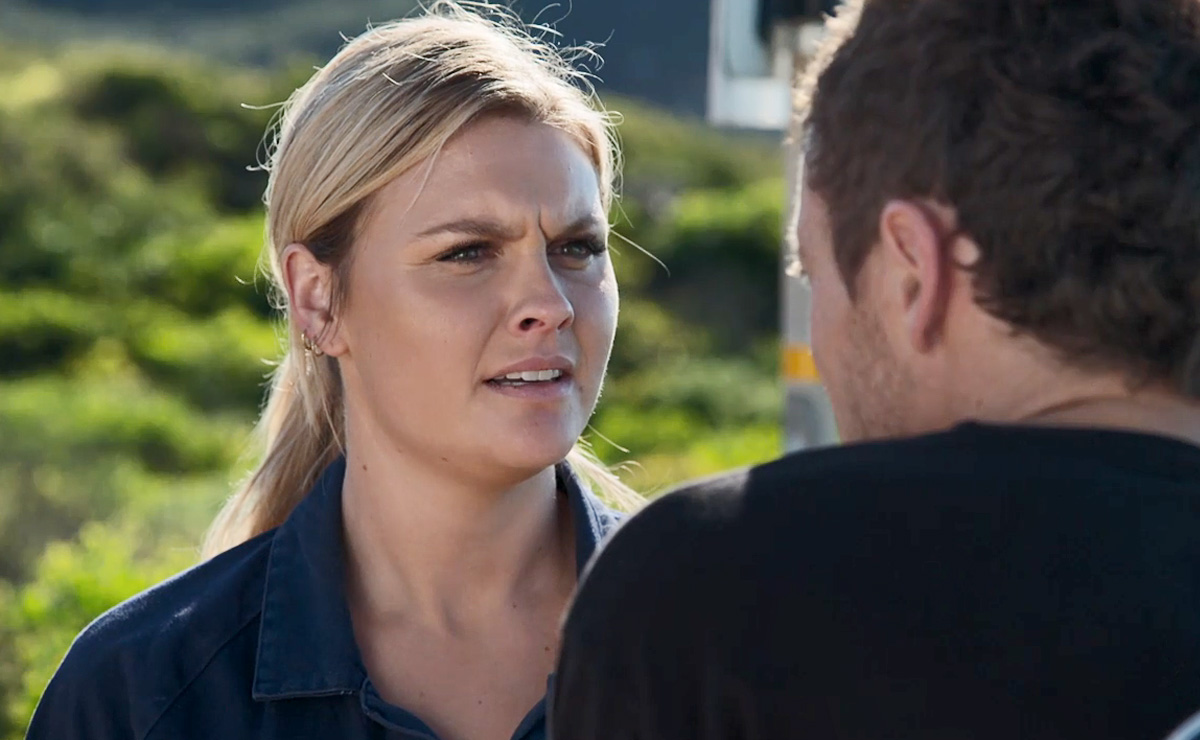 Elsewhere in Summer Bay, Ryder (Lukas Radovich) and Chloe continue to put on a brave face over their recent split and concentrate on running their business together.

With the chaos that has ensued over the past few weeks, their online ratings have taken a tumble, and the duo need to act fast to ensure their business’s reputation doesn’t go down the pan completely.

With the turmoil that Ryder’s family are currently going through, it’s all the more important to Ryder and Chloe that they work to clear their debt to them as soon as possible. 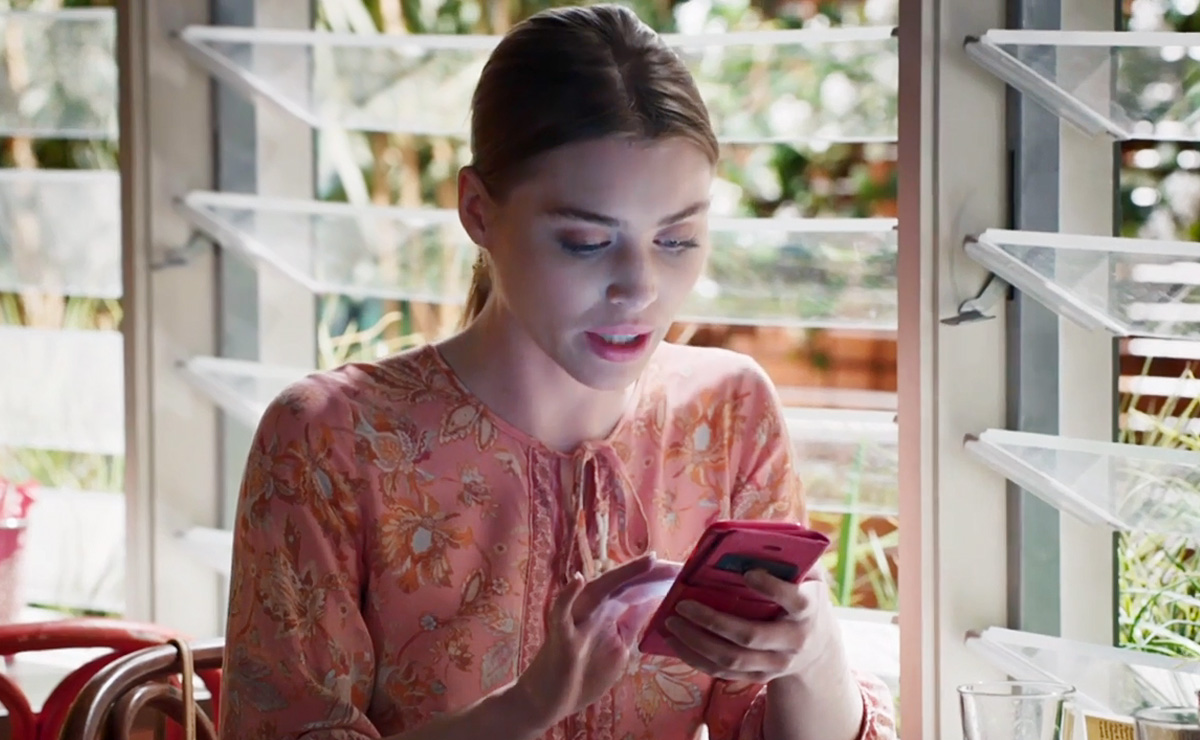 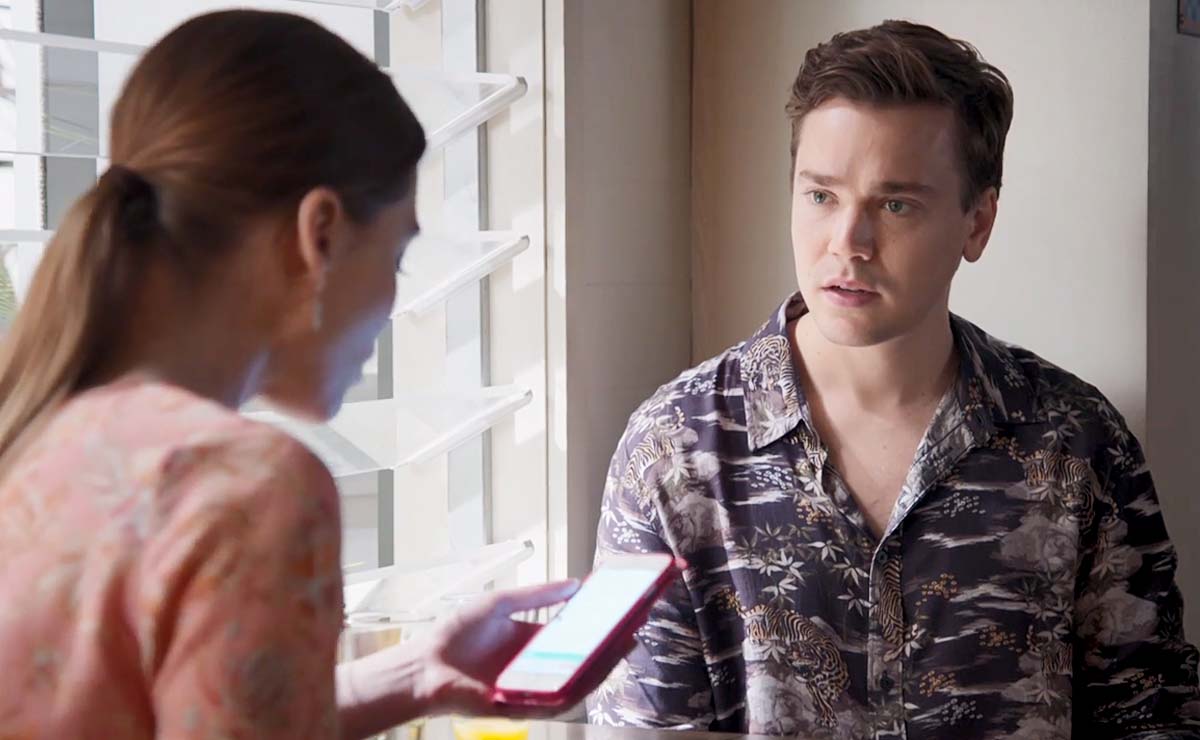 WIth a fresh batch of orders in, Chloe and Ryder put in an order to their suppliers, only to find that they’re refusing to fulfil the order due to an outstanding payment.

Ryder agrees to deal with it and manages to smooth things over by agreeing to pay them $200 on the company credit card—but, just when things seem to be getting back on track, Ryder makes a costly mistake by accidentally adding an extra zero to the payment.

He’s sent the supplier $2000 and maxed out their credit card! 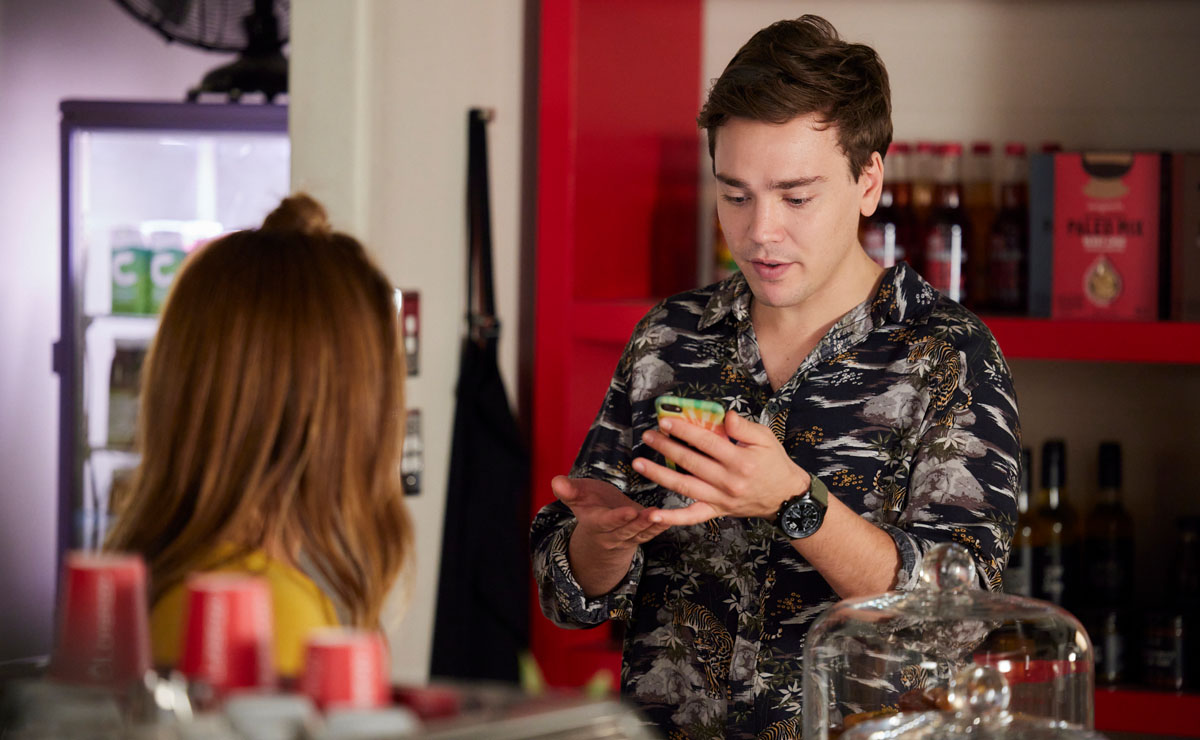 Leah (Ada Nicodemou) tries to reassure Ryder that all is not lost, but when Ryder calls the supplier they refuse to refund the overpayment.

With the company credit card now maxed out and with the addition of a hefty fee from the bank, Chloe and Ryder don’t know what to do.

When Ryder’s love rival Theo (Matt Evans) comes up with a solution, Ryder is very quick to turn him down—but, with no other options presenting themselves, is Ryder going to be forced to swallow his pride….? 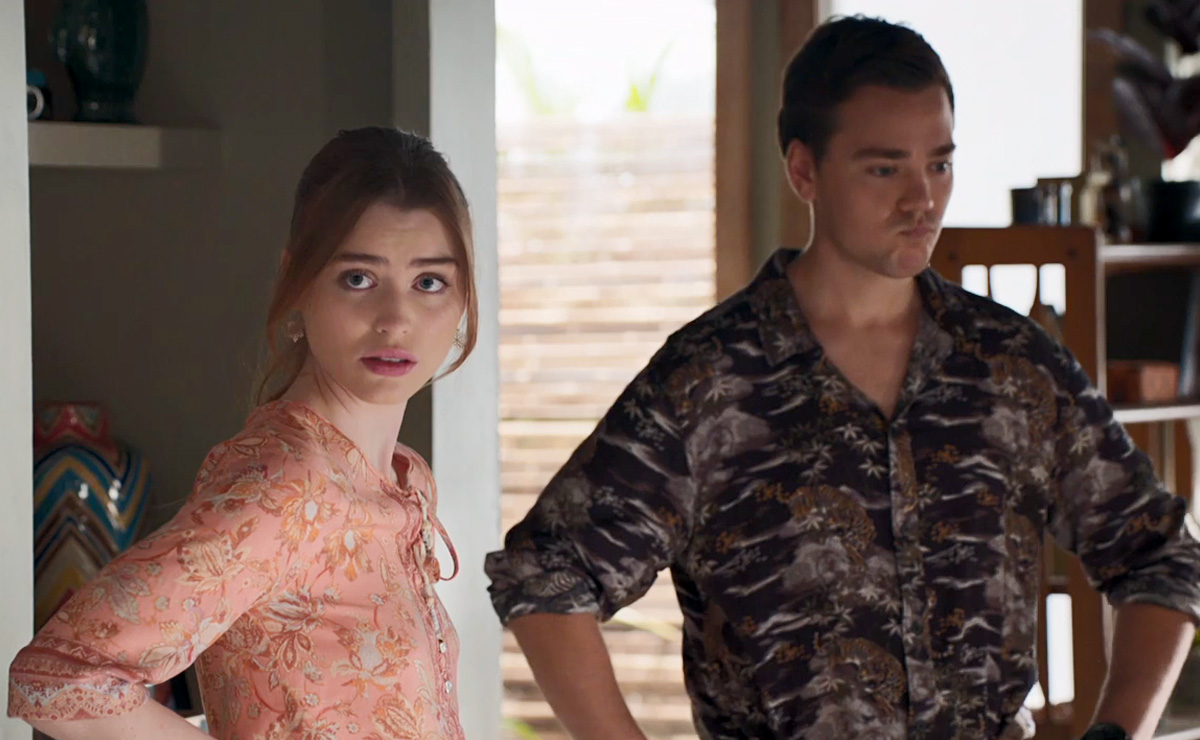 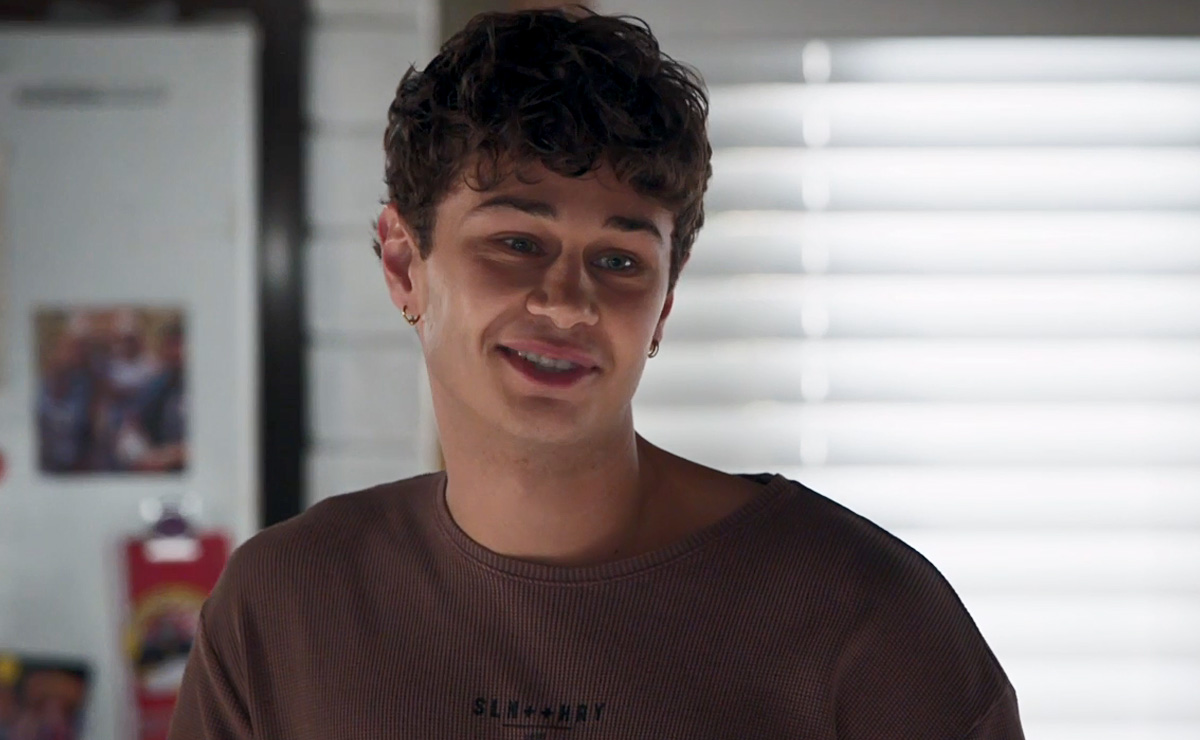