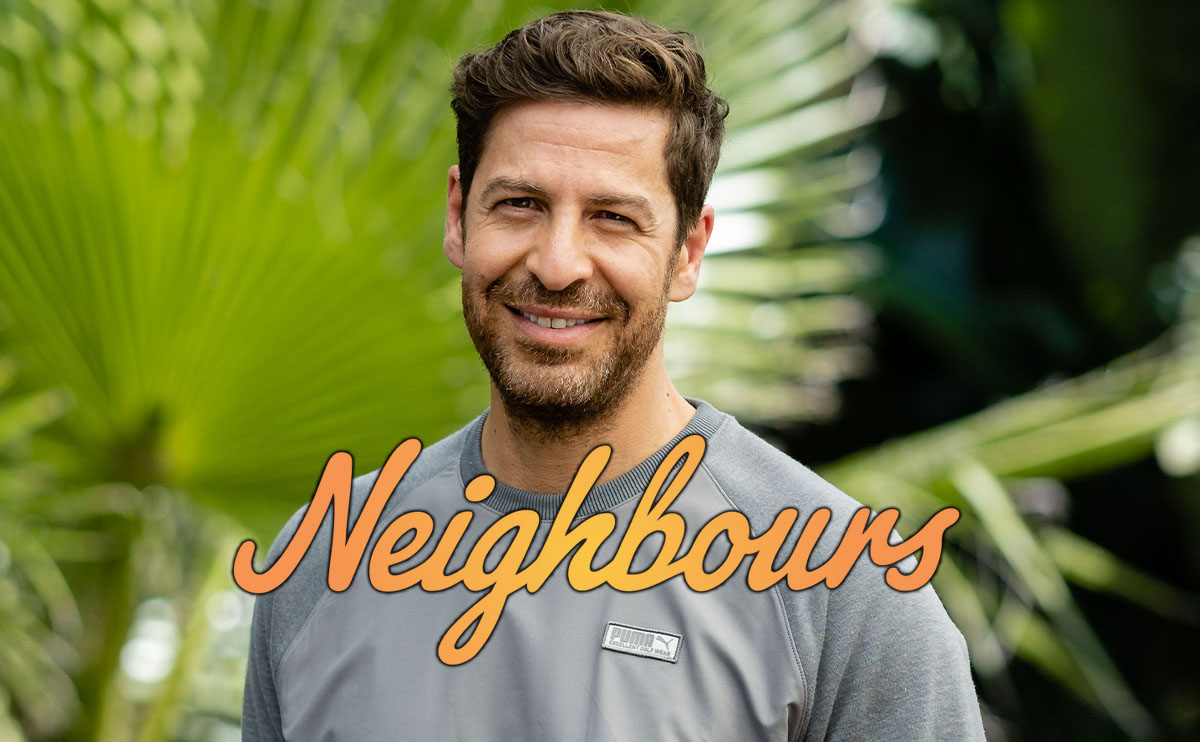 Coming up on next week’s Neighbours in the UK, Pierce’s unexpected return has a ripple effect on multiple Ramsay Street residents, especially his son Hendrix and his ex-wife Chloe. Meanwhile, Amy has the chance to live out a life-long dream.

These episodes will air from Monday 28th June.

“The only reason she agreed to have this baby is to be close to you.” 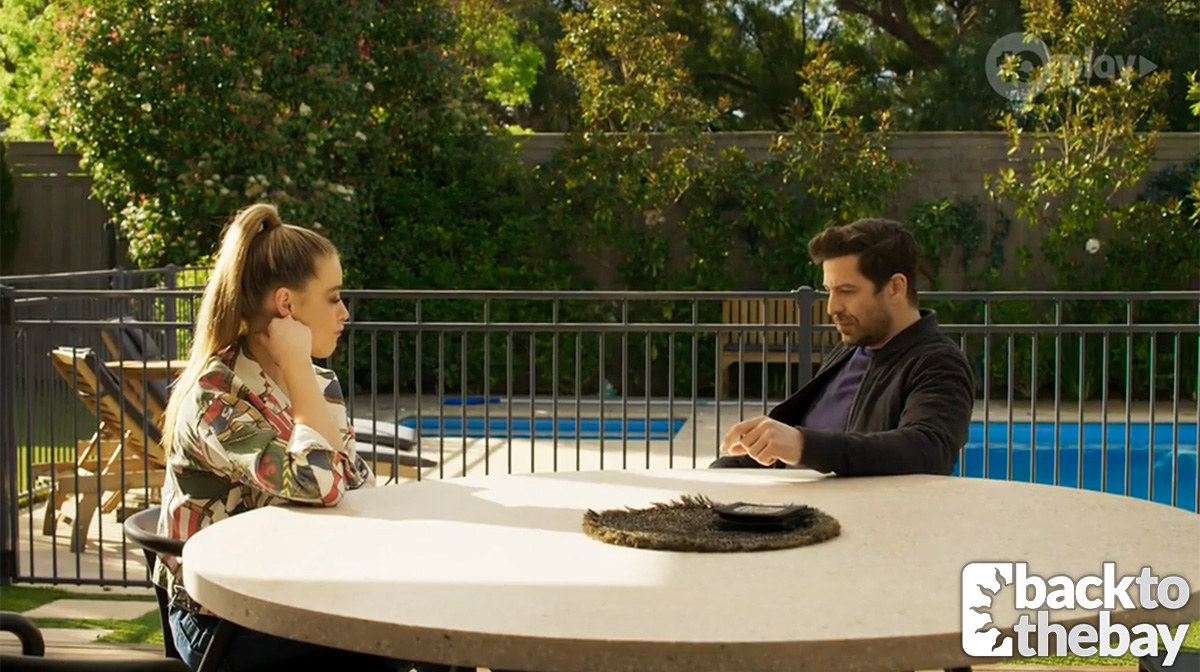 These were some of the last words Pierce Greyson (Don Hany) muttered to Chloe Brennan (April Rose Pengilly) before he spread his wings and fled to Sydney after his marriage breakdown.

Yet in the time he’s been away, Chloe and Nicolette have gone from strength to strength. Despite playing cat and mouse for some time, the pair finally got the act together and hooked up, and they’ve never looked back.

So when Hendrix (Benny Turland) receives word that his father is heading back to Erinsborough, it is naturally a shock for the couple. 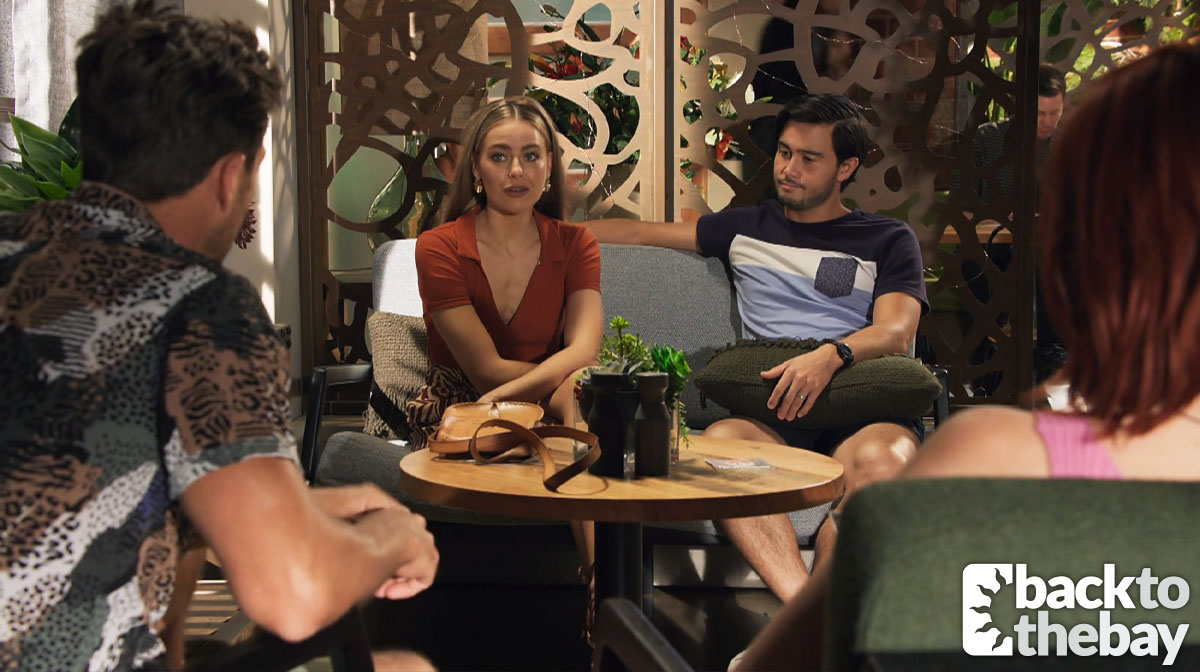 In Paul’s eyes, Pierce’s return is hilarious. “I mean come on, Nicolette vs her old rival! His ex wife is seeing the woman he was jealous of when they were together. This is gold.”

Chloe talks the shock news over with her brother Aaron (Matt Wilson) and brother-in-law David (Takaya Honda), who immediately worry about how their surrogate feels.

However, Nicolette is very assuring of the fact that she isn’t worried about Pierce’s return, nor does she feel threatened. “If Chloe is okay with it, then honestly, I don’t have an issue either. What is he gonna do, badmouth me to my family and friends like last time?” 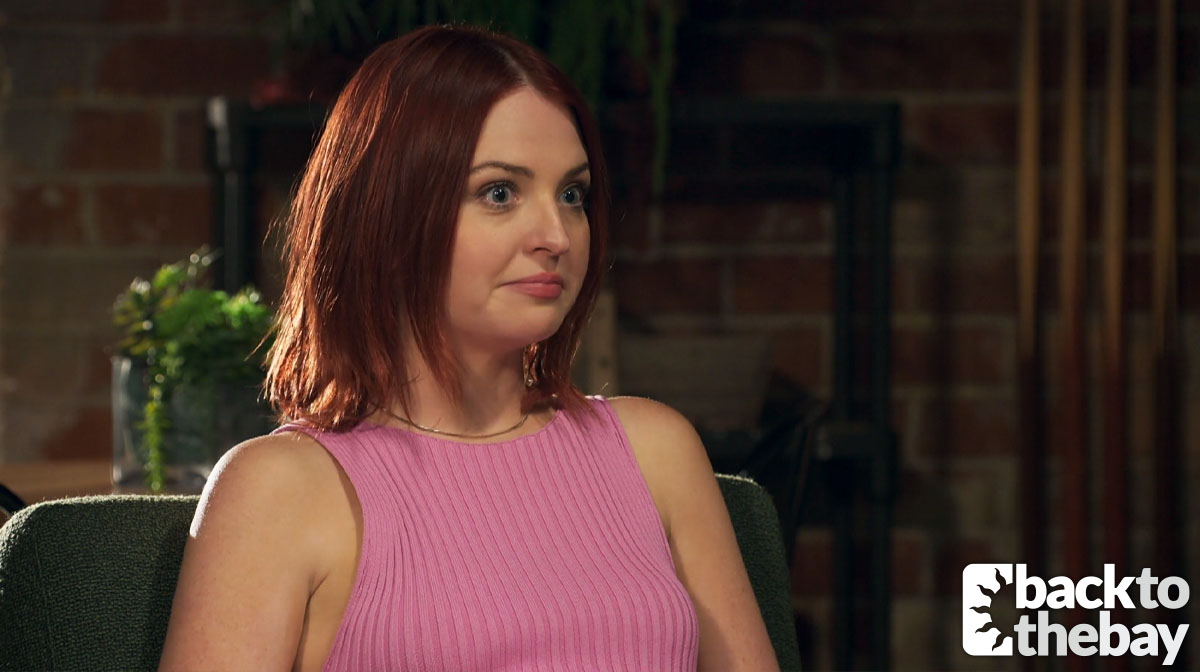 After all, why would she feel intimidated by a wet muffin?

However, when Pierce pays a spontaneous visit to No. 24, and Nicolette, Chloe and Pierce come face to face for the first time in months, it’s clear the feisty redhead is hiding her insecurities. 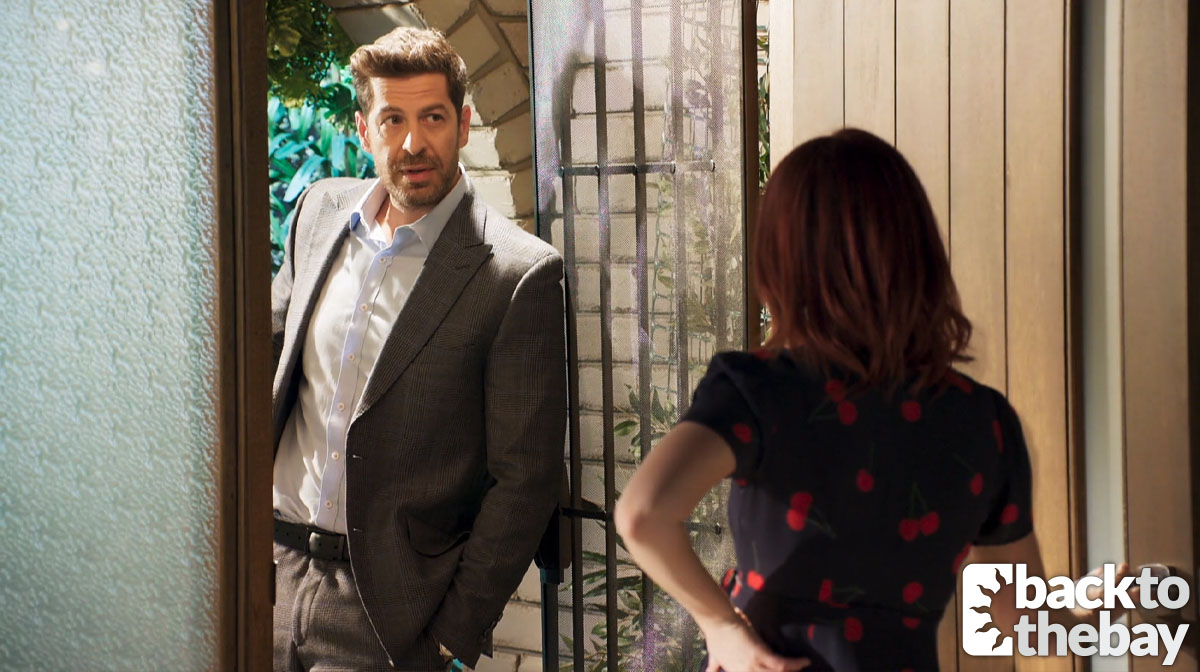 When Pierce rocks up unannounced on their front doorstep, Nicolette is the first one to greet him. 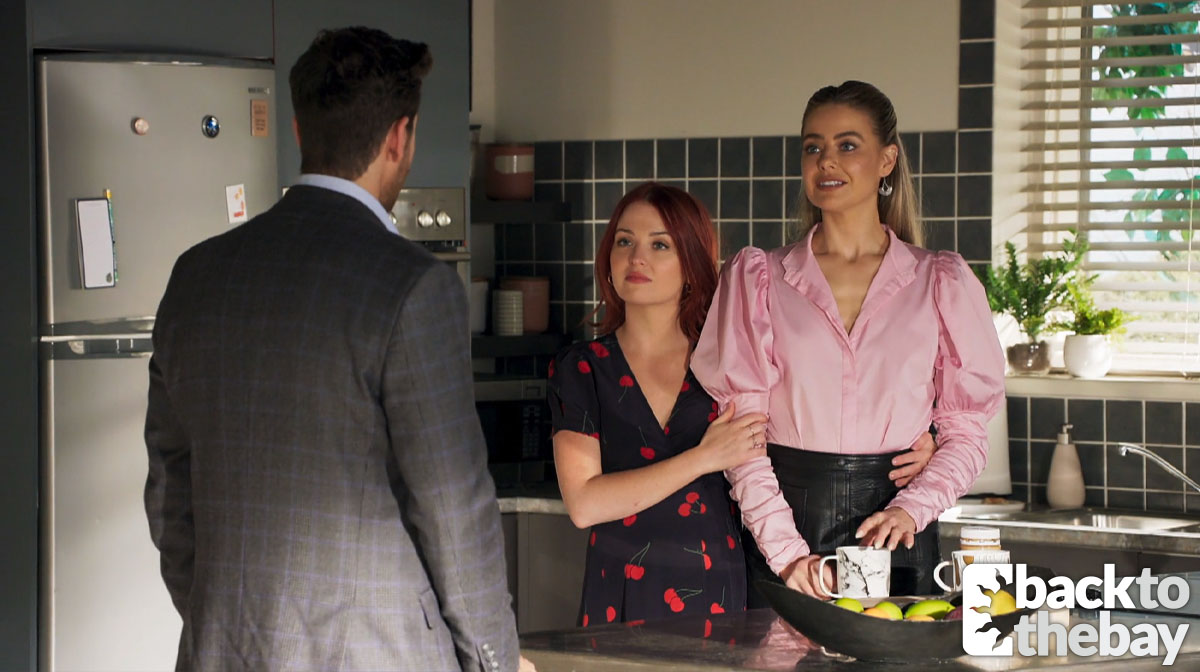 It is obvious that she is standoffish about the whole situation. Especially when she runs straight to Chloe’s side after inviting the billionaire in, putting her arm around her girlfriend and making their new relationship status perfectly clear.

Talking about his motive for visiting, Pierce tells Chloe that he thought he’d best rip the bandaid off, worrying they might run into one another at Lassiters.

Chloe appreciated of the sentiment and even offers to go for coffee with her ex, something she has already spoken to Nicolette about. 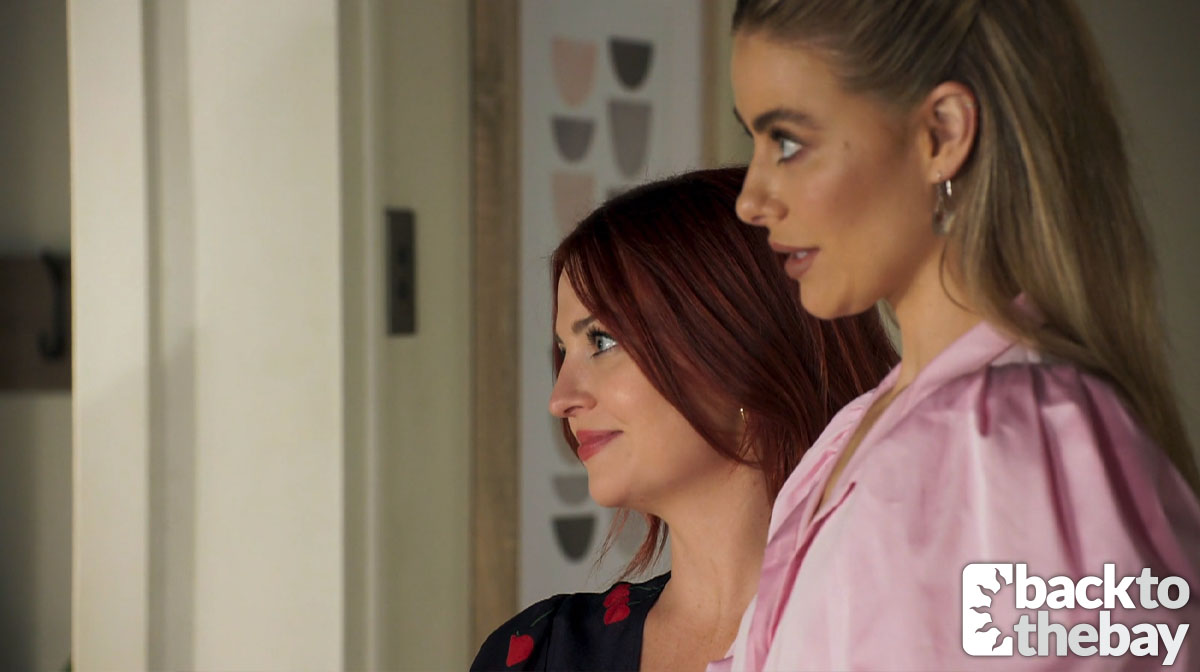 He agrees, before heading off, leaving Chloe and Nicolette to debrief. While Nic maintains her composure, it is obvious that she isn’t as comfortable as she first said she would be.

While visiting Harold’s, Pierce comes face to face with Nicolette again and the pair can’t help but fall back into their old bickering ways.

They have a sparring match as Pierce learns that Nicolette is the new manager of the café. He also can’t help but note how quickly Nic got her claws into Chloe, and makes his feelings very clear – he thinks their relationship was born out of grief, and doesn’t think they’re going to last. 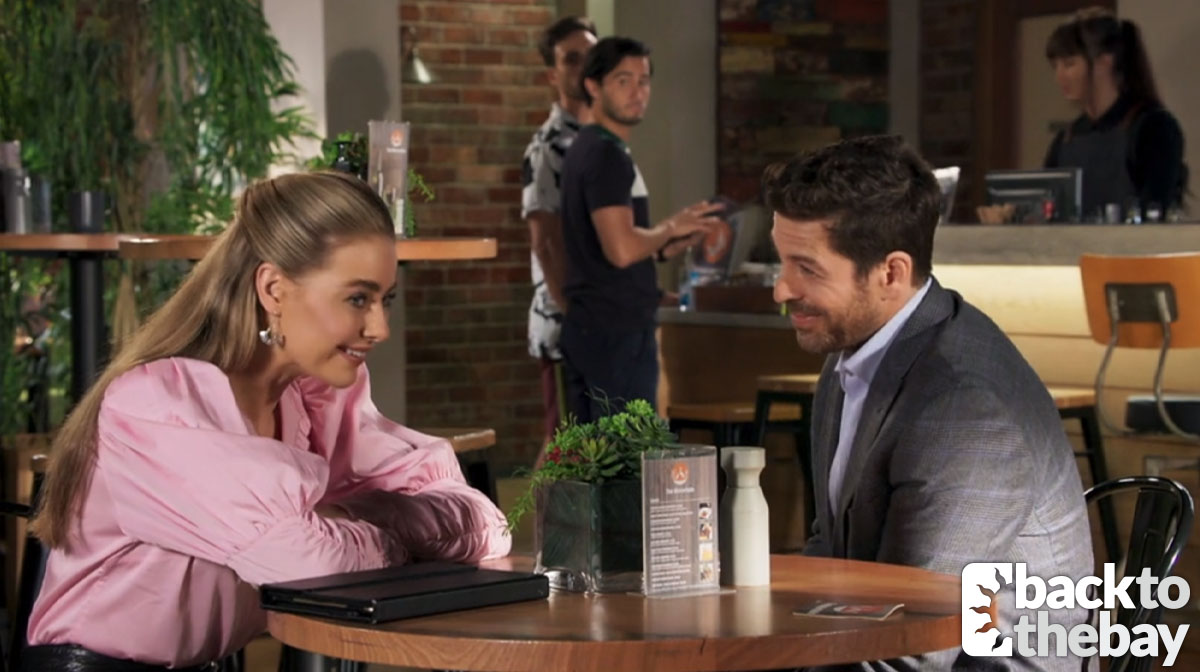 Later in the day, Pierce meets with Chloe at the Waterhole. While they both were initially worried things would be awkward, they are surprised by just how breezy it is.

As the pair reconnect and any animosity seems to be long forgotten, should Nicolette be worried about her girlfriend’s connection with her ex-husband?

Meanwhile, Hendrix is also struggling with his father’s reappearance in his life. 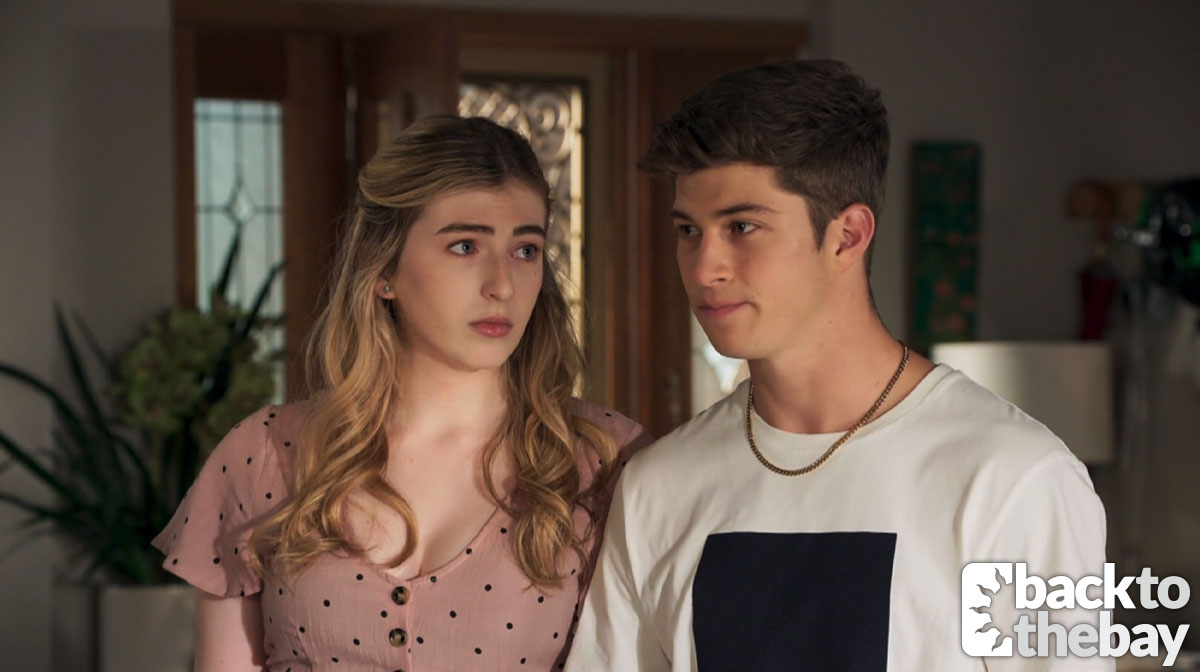 Unsure of his motives for returning, Hendrix is sure that his father won’t want much to do with him.

Although Karl (Alan Fletcher) and Susan (Jackie Woodburne) attempt to calm his negative feelings, Hendrix is positive Pierce won’t have anything nice to say.

“That’s what he does, tells me how much of a screw up I am,” he says, with no belief his father has changed.

It is obvious that Pierce at the very least wishes to reconnect with Hendrix as he heads straight to No. 28 to visit him. Unfortunately, Hendrix doesn’t reciprocate, instead choosing to go on a drive with Karl. 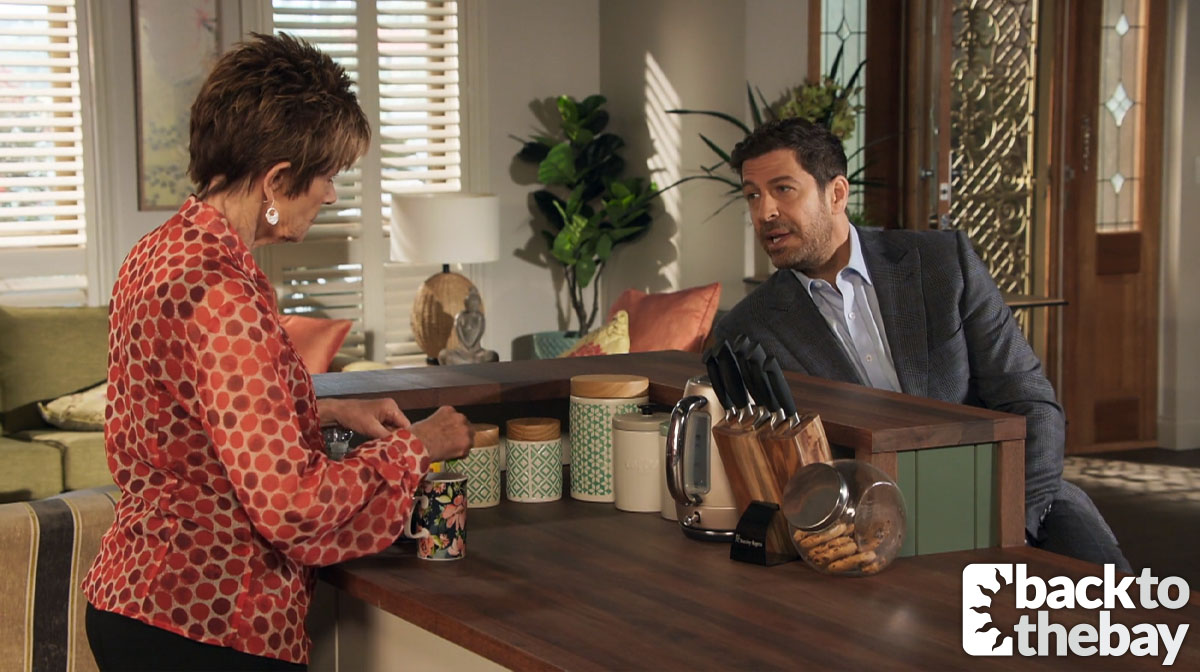 With Hendrix out of the way, Susan makes Pierce a cuppa and the pair talk about him. He couldn’t be prouder when Susan sings his praises about him getting his life back on track.

Ignorant to this exchange, Hendrix’s whinging continues – so much so that Karl has no choice but to pull him up on it. Obviously full of resentment, the troubled teen questions why he should drop everything when his father just appeared out of the blue. 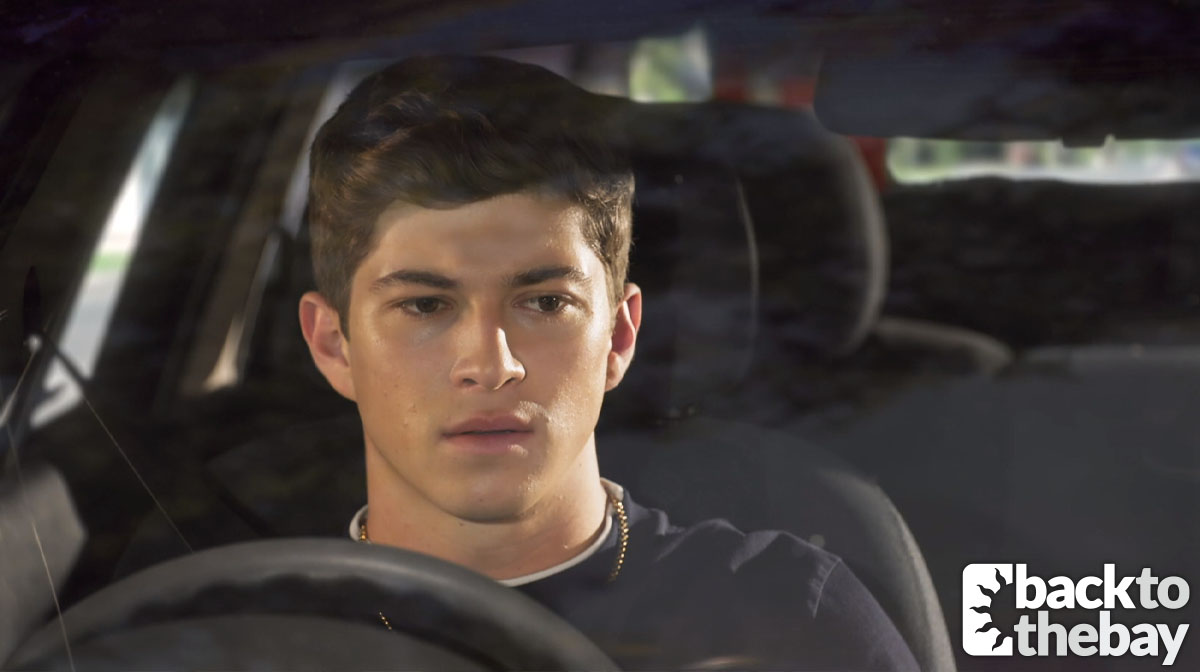 To this, Karl reveals that every time Hendrix has screened Pierce’s call, Pierce has contacted him and Susan to check in. He sent them money to pay Hendrix’s board. He even made sure he would have some pocket money coming in.

Completely blindsided, Hendrix decides to visit his father and, with his opinion changed, thanks him for looking after Karl and Susan. The pair agree to go for a game of golf on the fairway and slowly, Hendrix is able to perk himself up.

Full of belief that this could be the new start they both want, he even dresses up for the occasion. 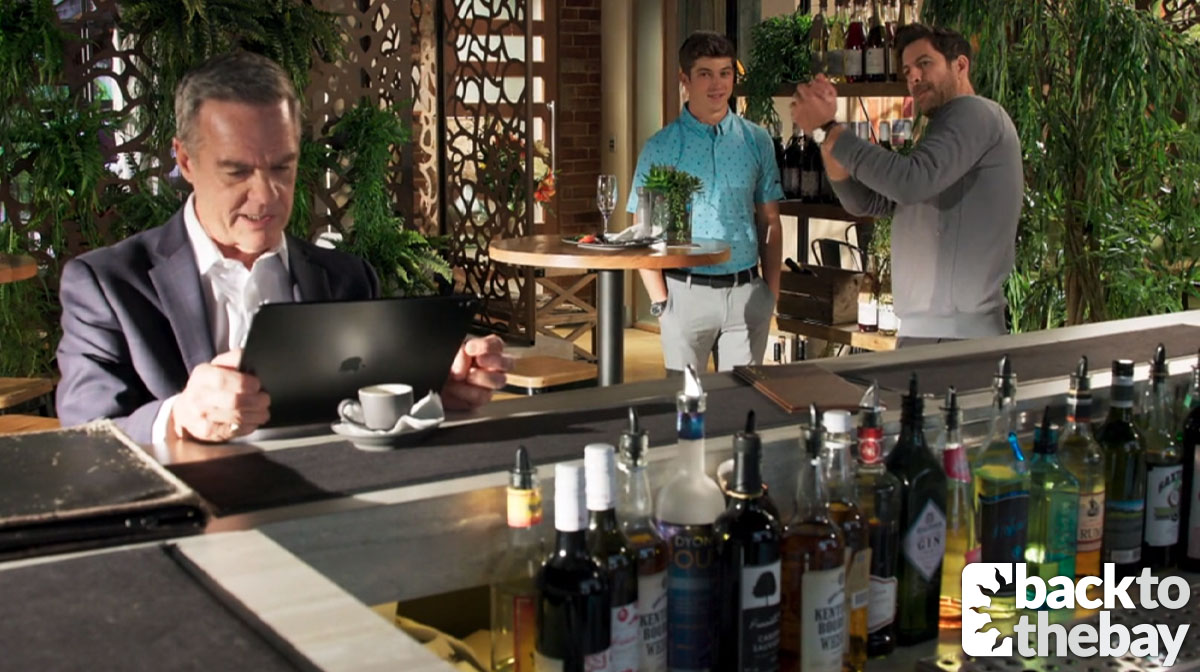 However, when he arrives at the Waterhole, he finds his father engaged in a slanging match with Paul (Stefan Dennis). It’s here he learns that Pierce is selling his beloved Melbourne vineyard – which he coldly refers to as his last connection to Erinsborough – and is in town to sign the paperwork.

“Just don’t sleep with any of your buyer’s wives,” Paul advises him as he walks off.

Shaking off the confrontation, Pierce readies Hendrix to head off, but his son calls him out. Obviously he wasn’t in town to reconnect with his son at all, it’s all just business. As always.

“You should’ve stayed in Sydney, because now I know I’m better off without you,” Hendrix tells Pierce, full of anger. 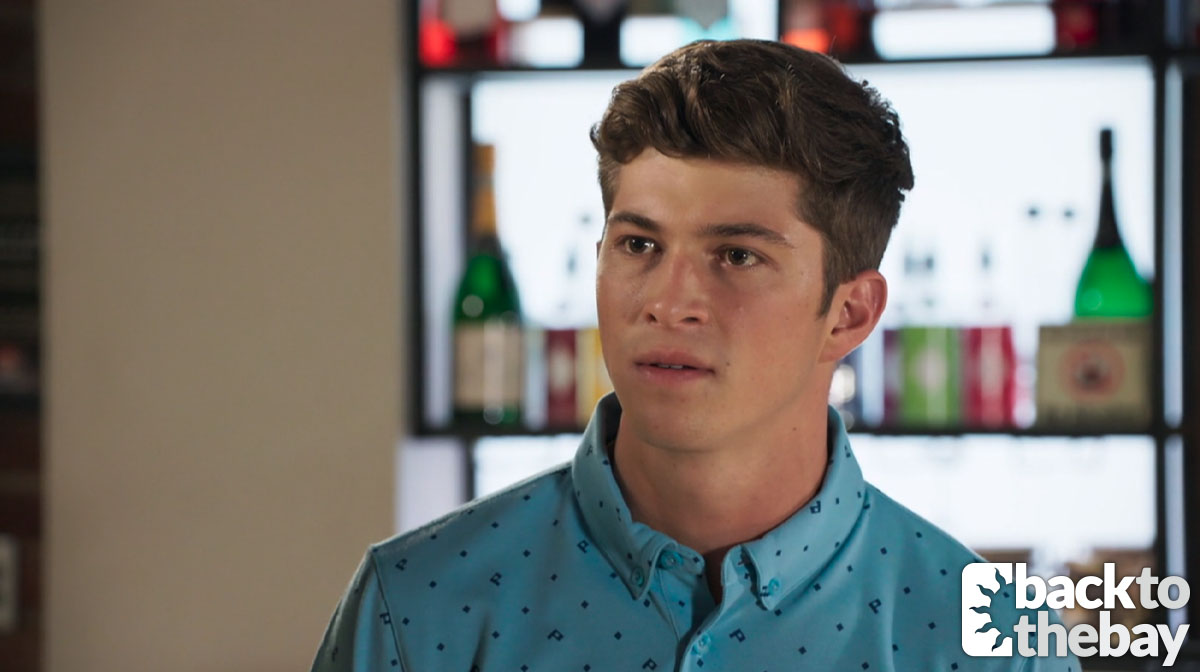 As he storms off, Pierce is left wondering whether he’s ruined any chance of reconciliation with his son before he’s even had a chance to properly explain himself.

Elsewhere on Ramsay Street, Amy (Jacinta Stapleton) is looking down the barrel of finally fulfilling the dream she always had: of being a Ramsay Street resident. 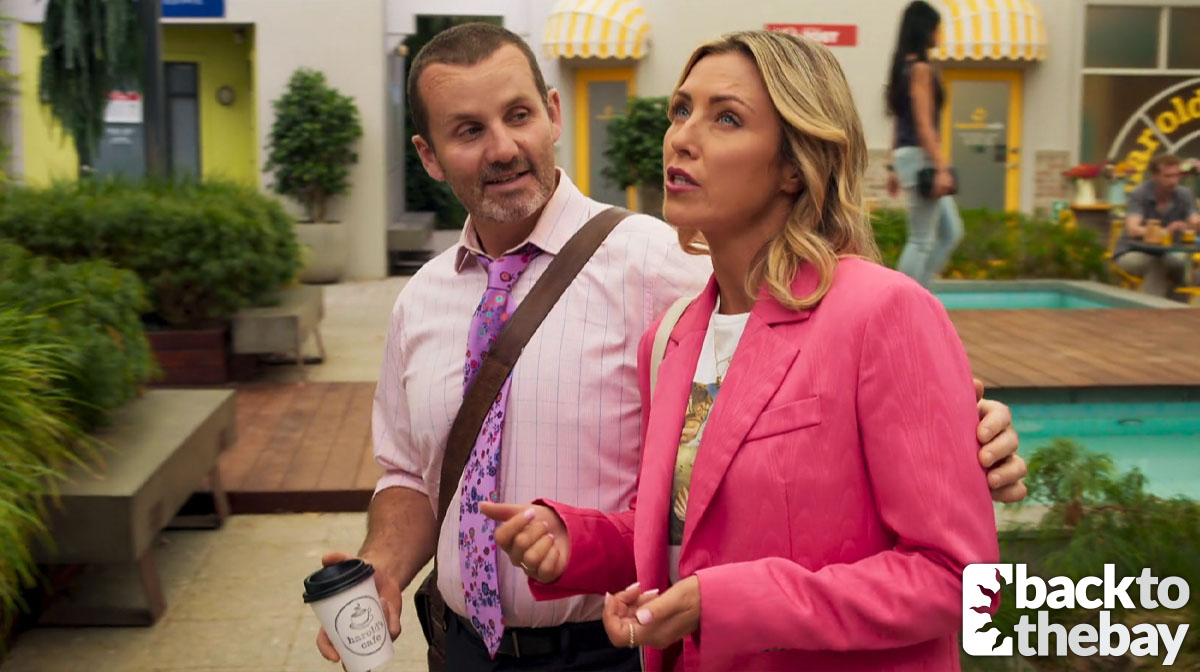 Long-term viewers will recall that Amy never technically lived on the street. However, she did spend a lot of time there whilst dating Lance.

However, the circumstances in which her newfound living arrangements come about are awkward, hilarious and oh so Amy!

A concerned Sheila and Kyle ask Levi to find balance in his life and start taking care better care of himself.

Roxy realises she has gone too far with her vendetta against Amy, but jealously continues to rear its ugly head.

Yashvi offers to move out with Ned to give their relationship a fresh start.

Just as Nicolette is about to tell Clive he’s overstated his welcome, he discovers that his beloved Herbert is dead and is overcome with grief.

While out driving together, Karl admits his pride in how Hendrix has grown up and Hendrix revels in feeling like part of the family.

Yashvi isn’t comforted by Ned’s explanation as to why he has a sketch of Sheila #2.

News that Pierce is returning ricochets around Ramsay Street.

Karl convinced Hendrix to spend time with his dad, but he soon feels foolish as he realises Pierce is actually here for a very different reason.

When Chloe seems open to spending time with her ex-husband again, Nicolette begins to feel a niggle of concern.

Pierce hits a weak spot with Nicolette when he tells her that they both know her relationship with Chloe will never last.

Hendrix is upset by Pierce’s intimation that he is here only for business.

Misunderstanding Toadie’s response to her request to move in, Amy moves herself right into No. 30 and doesn’t get off to the best start in her new home.

Pierce tells Chloe that she is making the same mistake with Nicolette as she did with him by rushing into another relationship to escape grief, which leaves Chloe troubled.

Amy blames Roxy for another mishap at the bar and Amy is confident that she finally has grounds to fire Roxy.

A nervous Ned pops over to see Yashvi, hoping to get their first chat as exes over and done with.