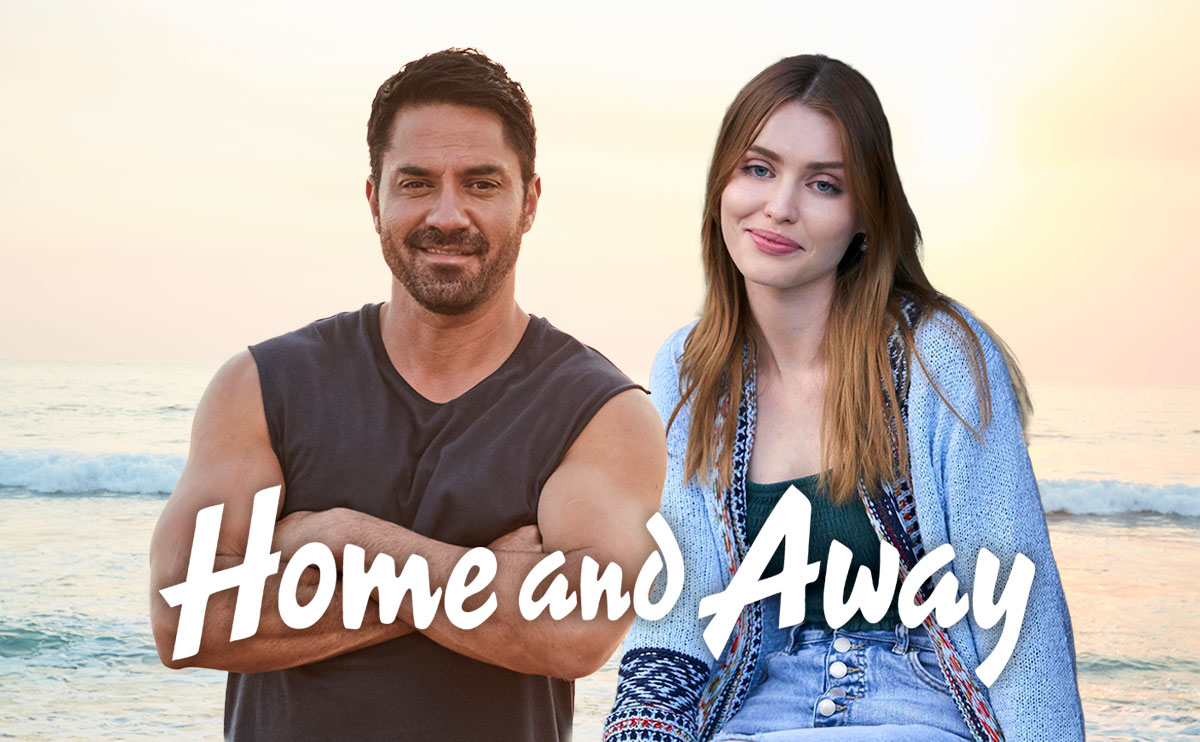 Next week on Home and Away in the UK, Nikau returns from New Zealand with a big surprise for Ari, whilst Kieran’s lies begin to unravel…

When we last saw Nikau Parata (Kawakawa Fox-Reo) a few weeks back, he had been forced to flee Summer Bay to stay with his mum Gemma in New Zealand temporarily, on the request of his uncles Ari (Rob Kipa-Williams) and Tane (Ethan Browne) who were being forced into partaking in an armed robbery.

With the threat against the family from criminals Paul (Jack Finsterer) and Leon (Will McNeill) now seemingly eliminated—following a surprise intervention from Dean Thompson (Patrick O’Connor) and Heath Braxton (Dan Ewing) that prevented the robbery going ahead—Nik decides it’s now safe to return home and surprise his loved ones, in more ways than one! 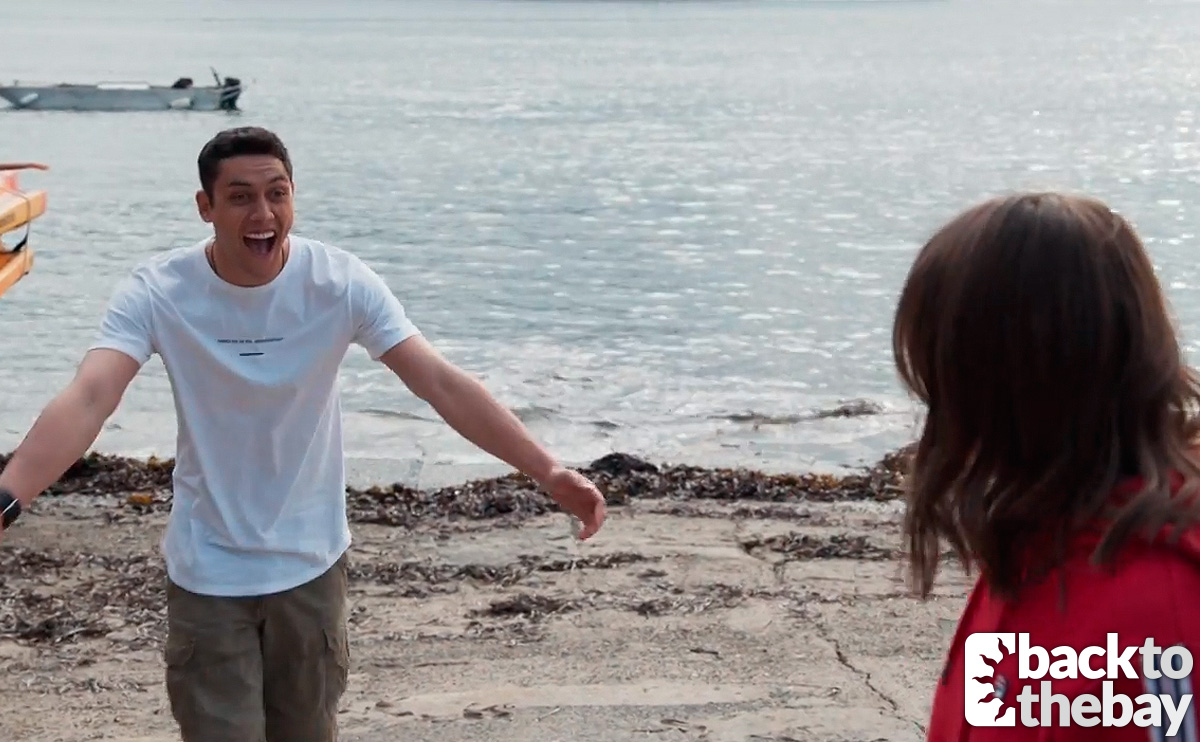 After dropping his things off at the house, interrupting a day Ari had planned with Mackenzie (Emily Weir), Nik quickly heads out to surprise girlfriend Bella (Courtney Miller). His reappearance couldn’t come at a better time, as she returns from the prison have been unable to see brother Colby (Tim Franklin) following his being put into solitary confinement.

But as they catch up at the diner, Nik receives a text from a mystery girl—Chloe Anderson (Sam Barrett)—who asks where he is as she’s been waiting ages for him. Nik doesn’t tell Bella who the text is from, but says he quickly has to go and sort something out. 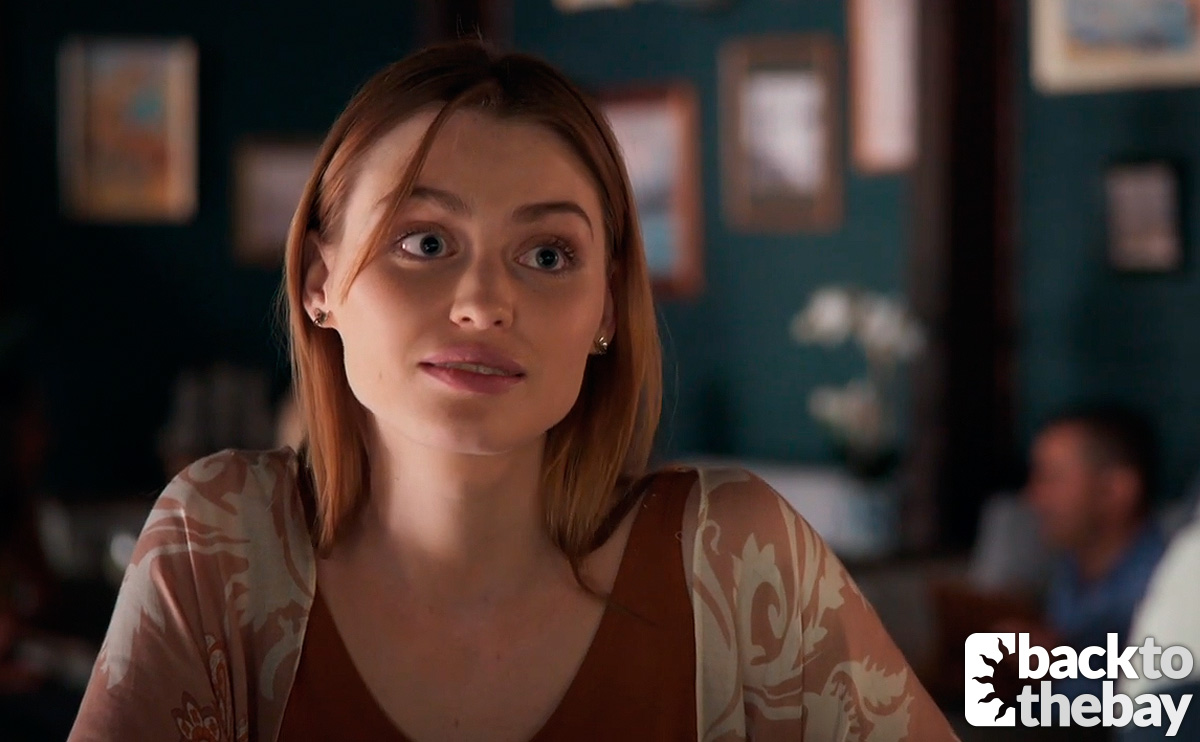 Meanwhile, Chloe has been spending time at Salt, getting off on the wrong foot with barman Ryder Jackson (Lukas Radovich). Not having her wallet on her, Chloe is unable to provide ID as she attempts to order a cocktail, and no amount of sweet talking is able to convince Ryder to serve her. 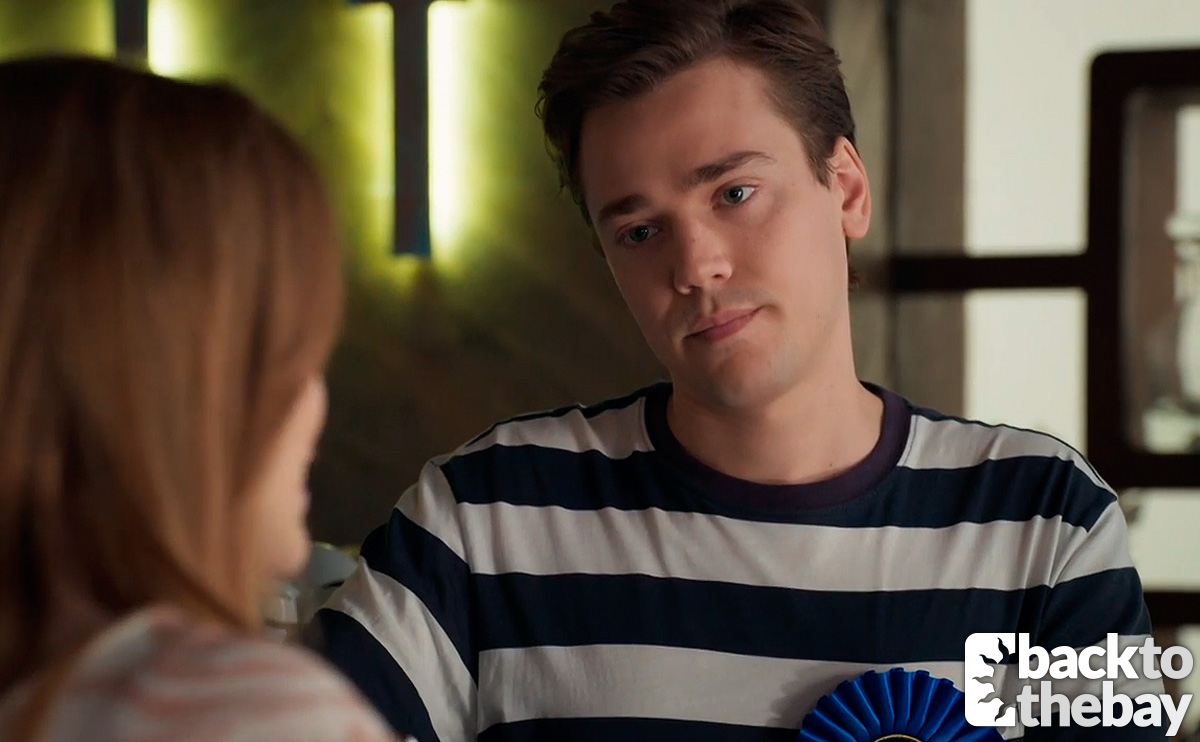 When she returns to the counter shortly afterwards, Ryder again refuses to serve her, before she points out she’s simply trying to order a pizza with the cash she has on her. Feeling foolish, Ryder takes her order and when asked by Roo (Georgie Parker) and Marilyn (Emily Symons) to introduce his new friend, he’s quick to point out that she’s nothing of the sort. She’s a nuisance customer and he’ll be keeping an eye on her!

Later on, Nik finally manages to tell Ari his big news—Chloe is in town. Mac immediately asks who Chloe is, and is shocked when Ari informs her that she’s his stepdaughter!

It transpires that Ari had been in a relationship with Chloe’s mother, Mia (Anna Samson), before his imprisonment over a decade ago. Chloe was only nine years old at the time, and was devastated by the disappearance of the only father figure she ever knew. 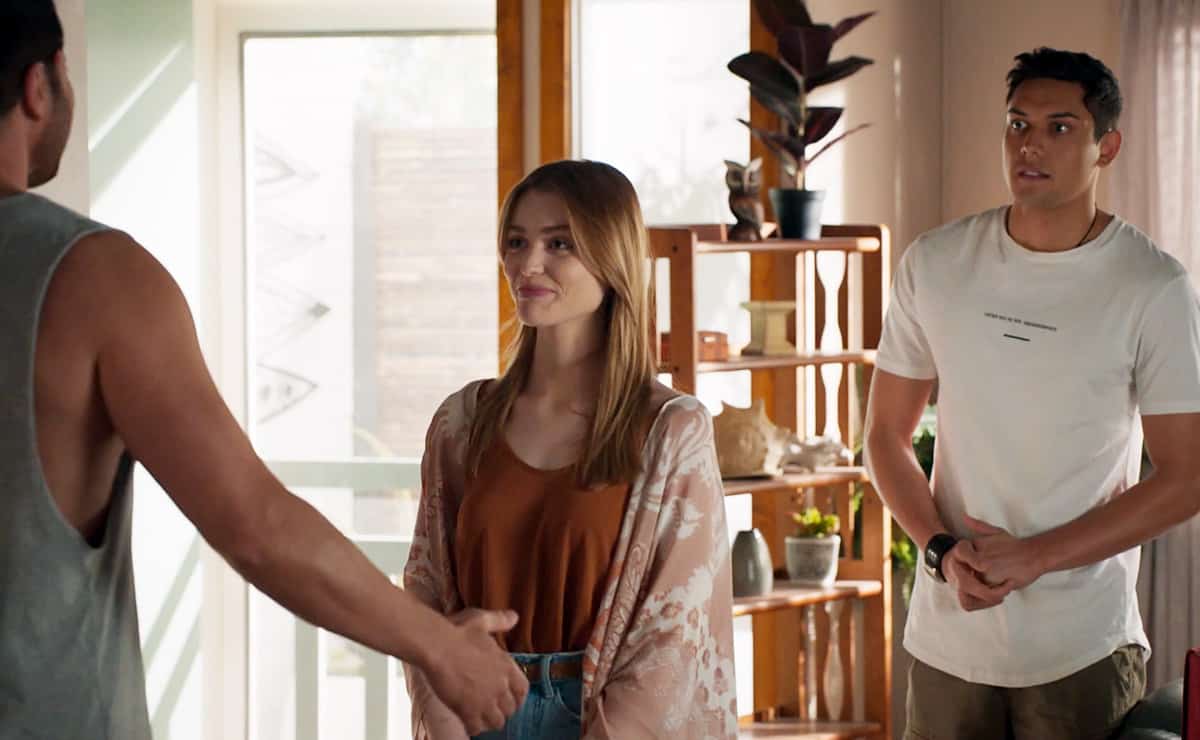 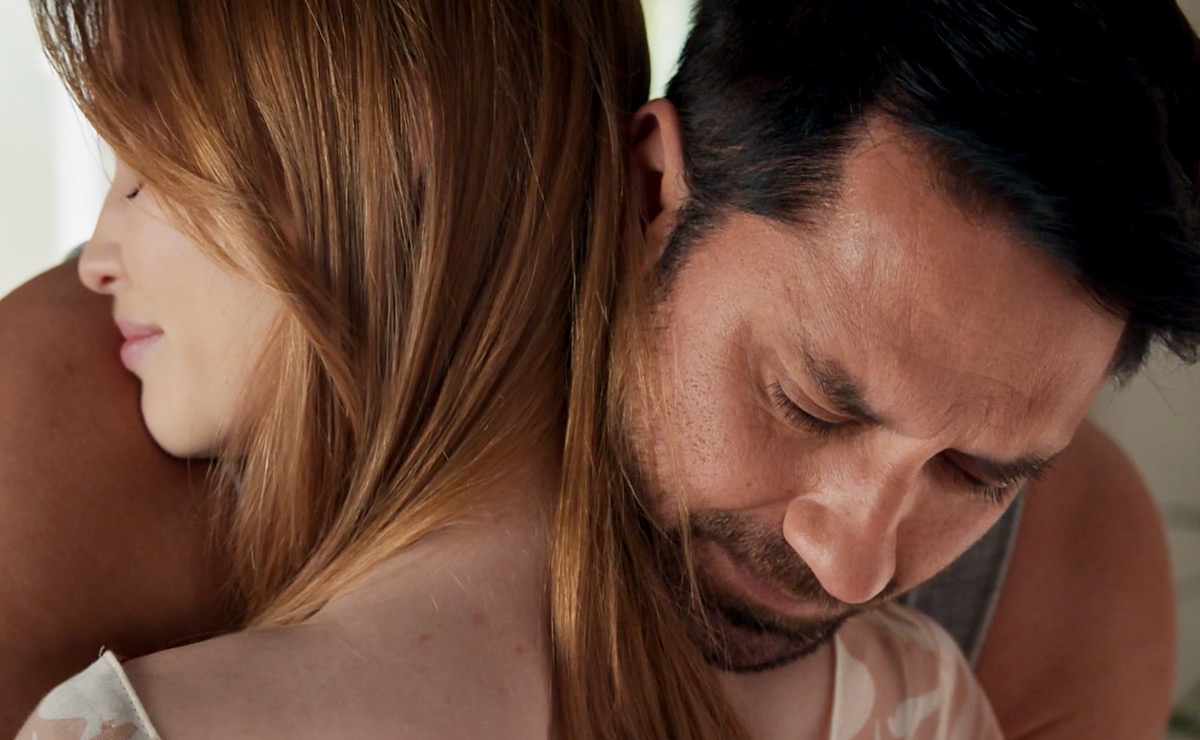 There’s a tearful reunion between Ari and Chloe when Nik brings her round to the house, and it’s explained that Chloe had been backpacking around New Zealand when she happened to bump into her childhood friend Nik.

When Chloe and Ari have a heart to heart, she reveals that her mum had told her that Ari didn’t want anything more to do with them after he was imprisoned, with Mia quickly moving the two of them away. It wasn’t until much later that Chloe learned that Ari hadn’t rejected her, and it was in fact Mia’s decision to remove Ari from Chloe’s life—something which she now hates her for. 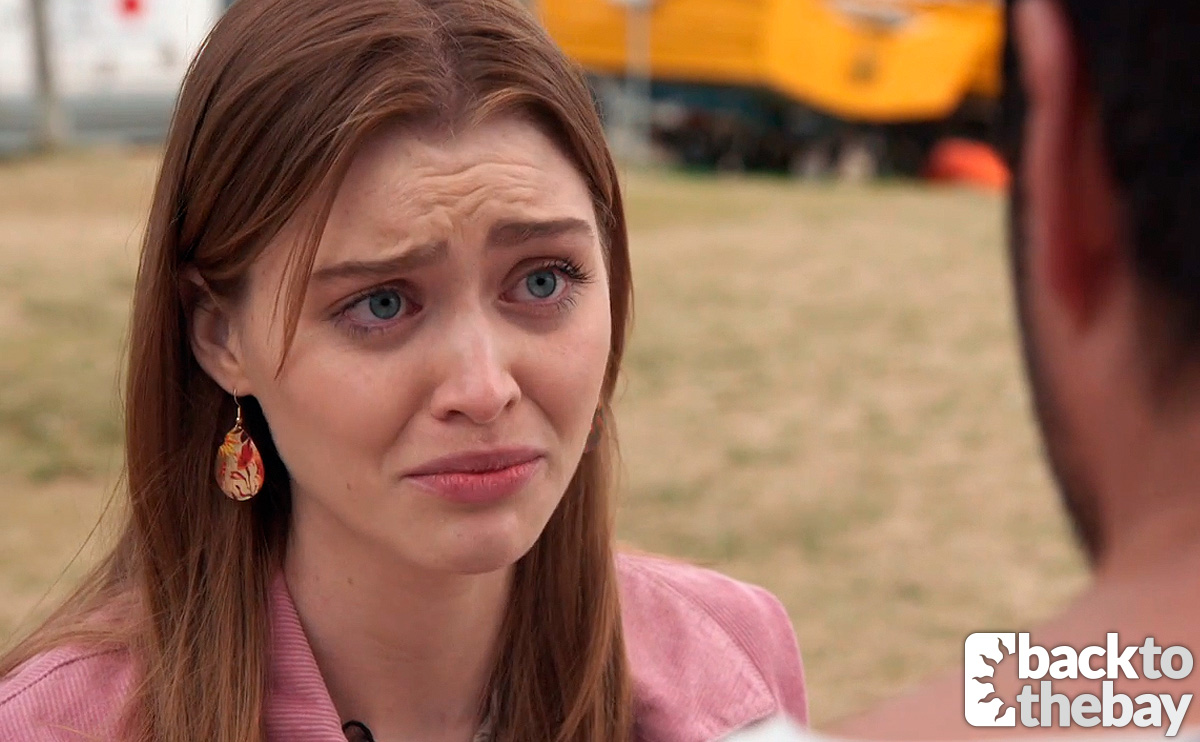 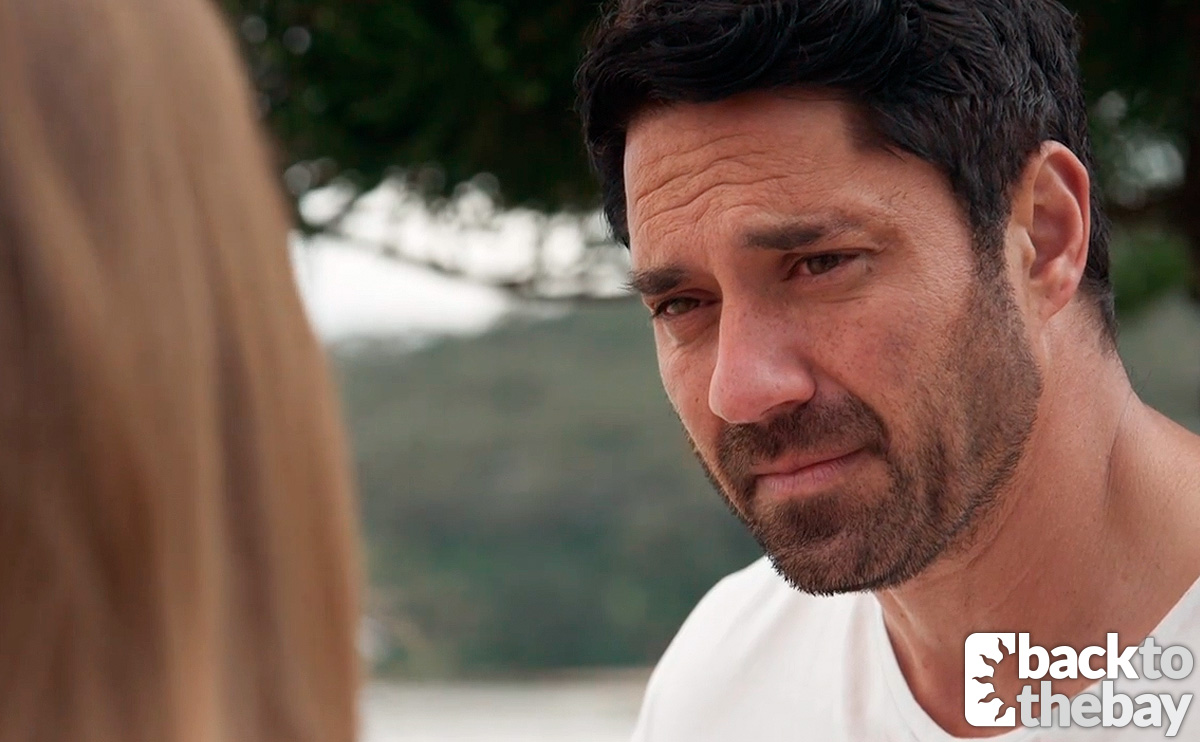 Meanwhile, Mac is also trying to get her head around this new information about her boyfriend, none of the family had ever mentioned Ari having a ‘stepdaughter’ before. As she chats with Ziggy (Sophie Dillman) about it, the topic of Ari’s ex comes up and Mac’s puts her head in her hands—she hadn’t considered the fact that there’d be a mother out there somewhere to complicate matters further!

Sure enough, later in the week, Ari and Mac are spending some time together at the Parata house when Mia turns up on the doorstep looking for her daughter… 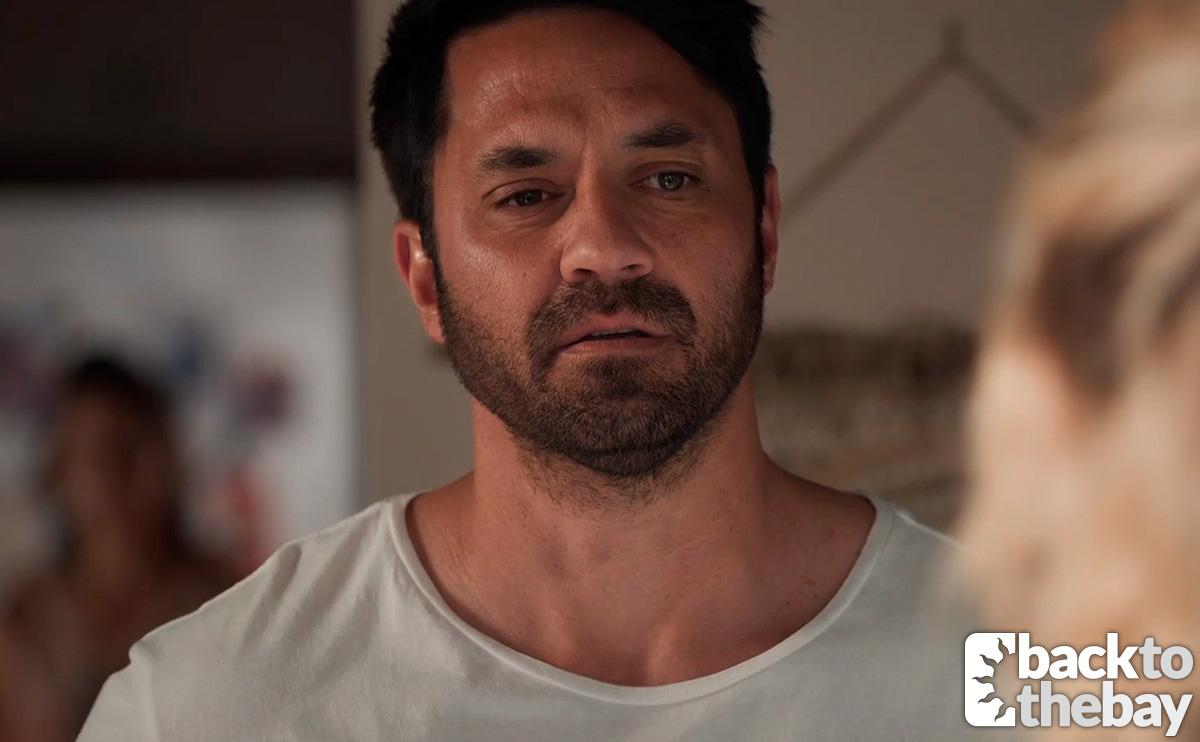 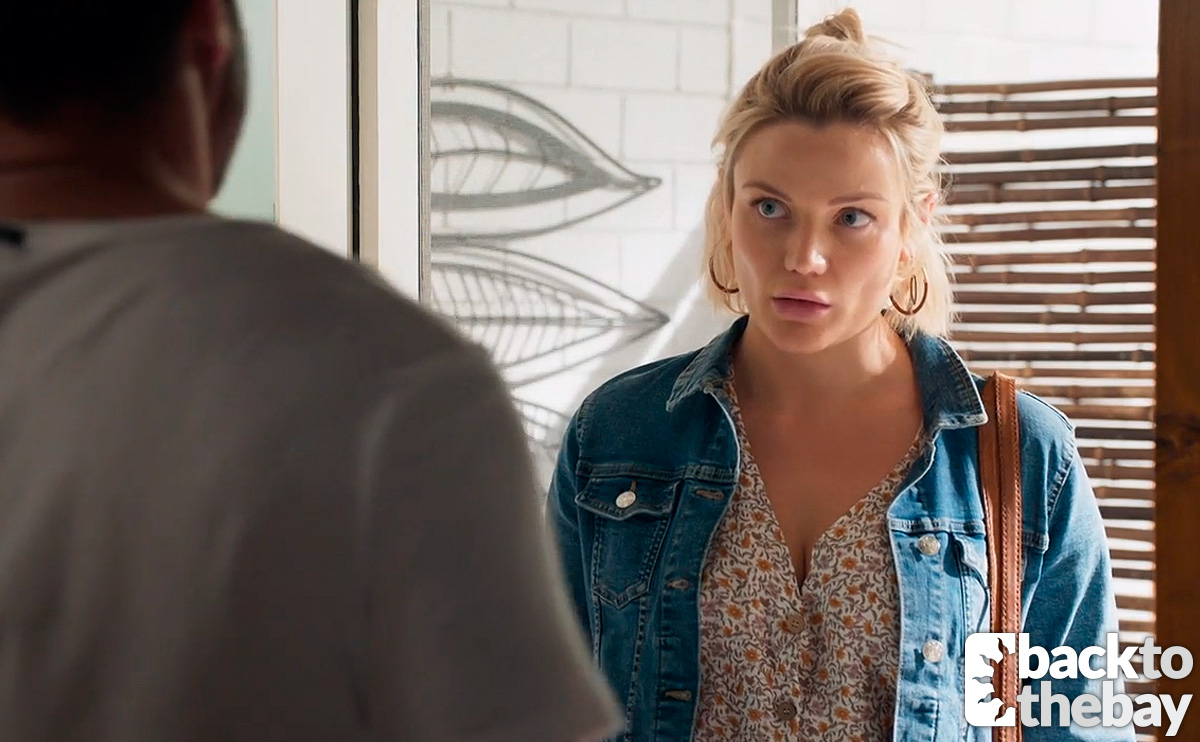 With the reappearance of both Mia and Chloe into Ari’s life, is Mac right to be feeling uneasy…?

Elsewhere in Summer Bay, Kieran Baldivis’s (Rick Donald) lies about his sobriety begin to unravel, as he desperately seeks out his next drink. 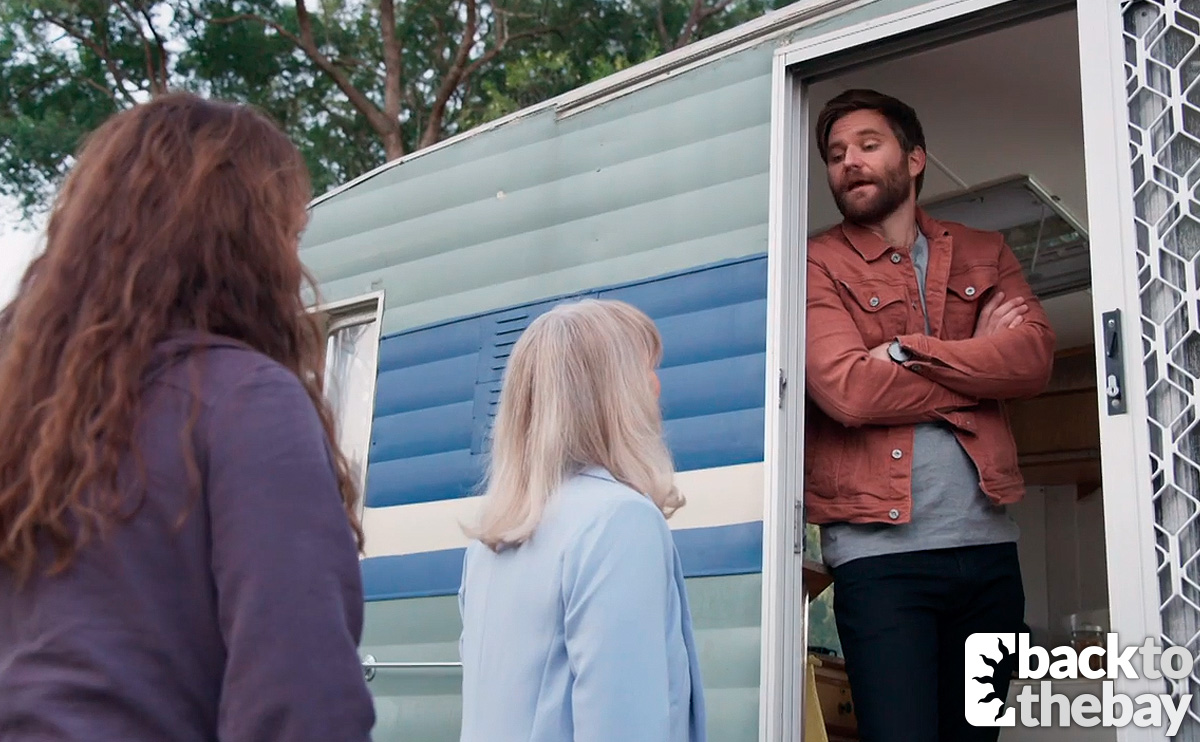 Kieran’s mother Martha (Belinda Giblin) feels like everything is falling into place perfectly now that she’s reunited with her estranged son—he has a job at the gym, and Alf has seemingly accepted him into the family. Talking of her delight to Roo as they knock on the door of Kieran’s caravan, little do they realise that he’s frantically hiding his empties. On being asked whether he’d like to join them for dinner that evening, Kieran lies and explains that he has to work. 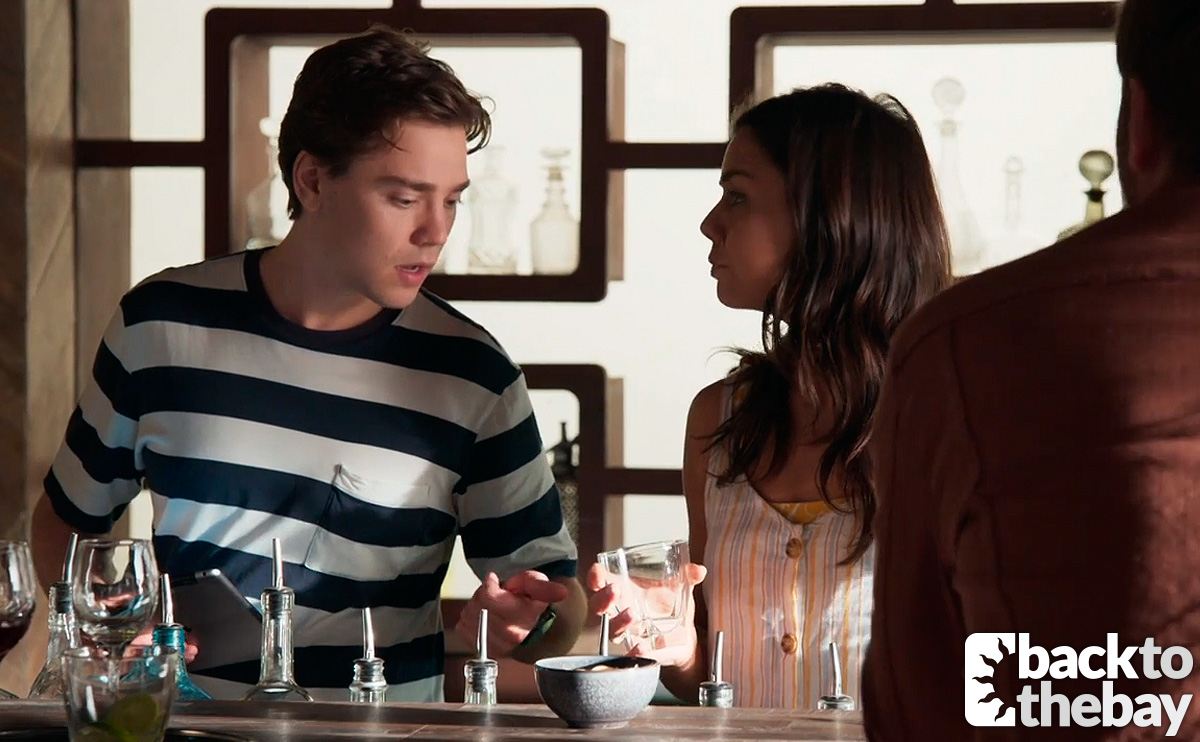 Kieran instead heads to Salt, where he orders a vodka soda from Mac. But just at that moment, Ryder emerges from the storeroom. Panicking as he sees Mac pouring out alcohol for Kieran, Ryder quickly stops her. Kieran covers by explaining that he actually ordered a club soda, she must have misheard! Mac apologises profusely for her error, but Ryder is suspicious of Kieran. 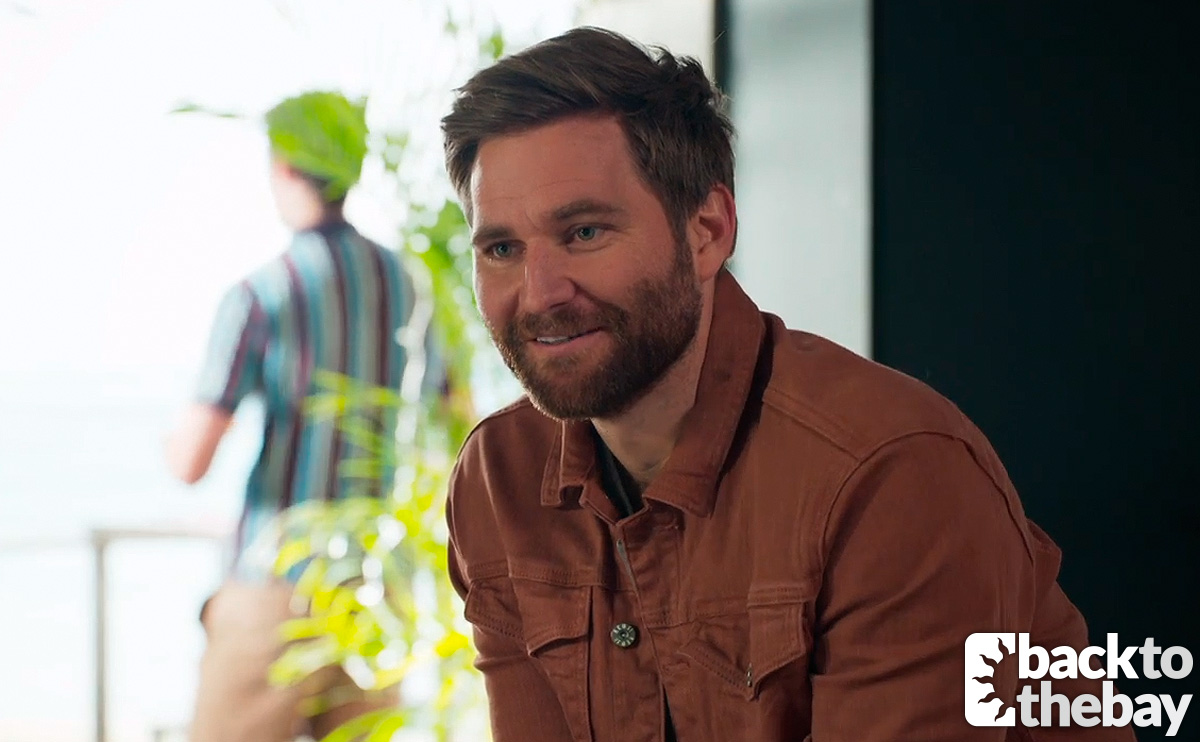 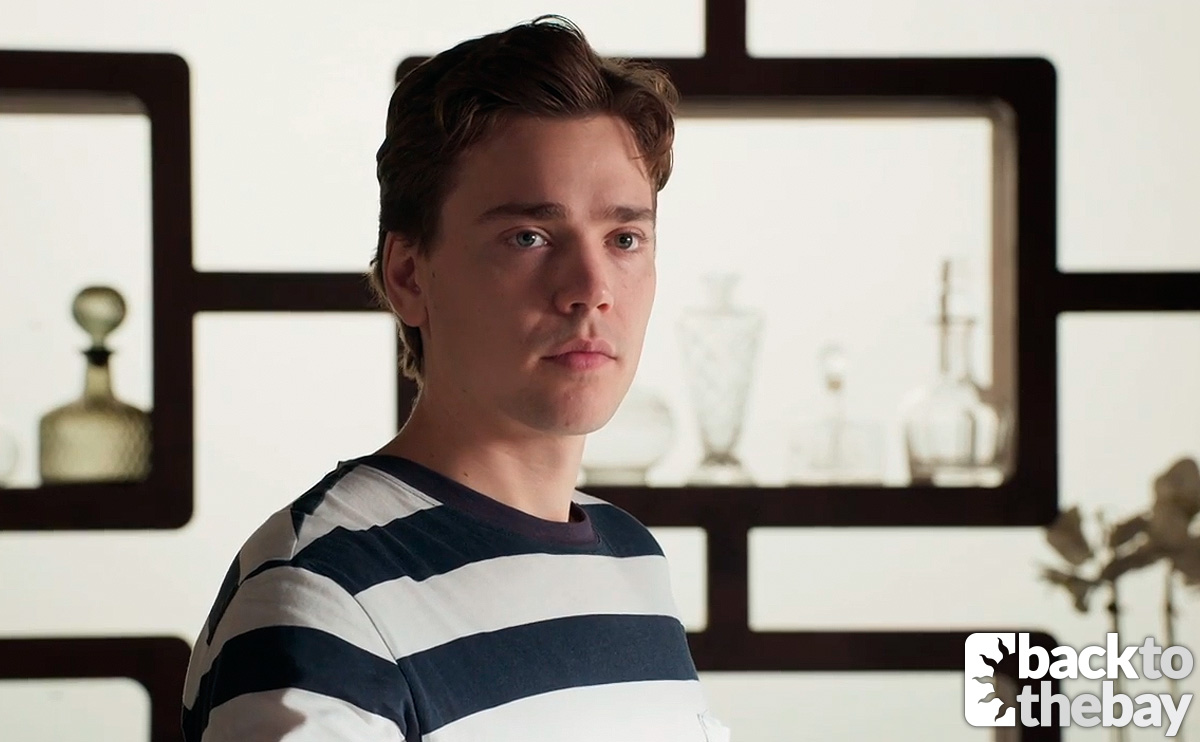 When the two head back to the caravan park together, Kieran again excuses himself by telling Ryder he’s going to get an early night. As soon as Ryder is out the way however, Kieran phones up a local bottle shop to organise a delivery.

As Kieran’s drinking continues, a sharp change in his attitude is noticed by his family, and Ryder relays to Roo what happened the previous day—he suspects that Kieran was trying to order alcohol. Visiting Kieran at the gym, where he clumsily drops some weights, Roo is forced to ask outright whether Kieran has been drinking, a question that highly offends him.

Relaying her suspicions to Martha, the two feel they have no choice but to search his van. Whilst there is a faint aroma of stale whiskey in the air, they cannot find anything, but find themselves interrupted when Kieran returns unexpectedly… 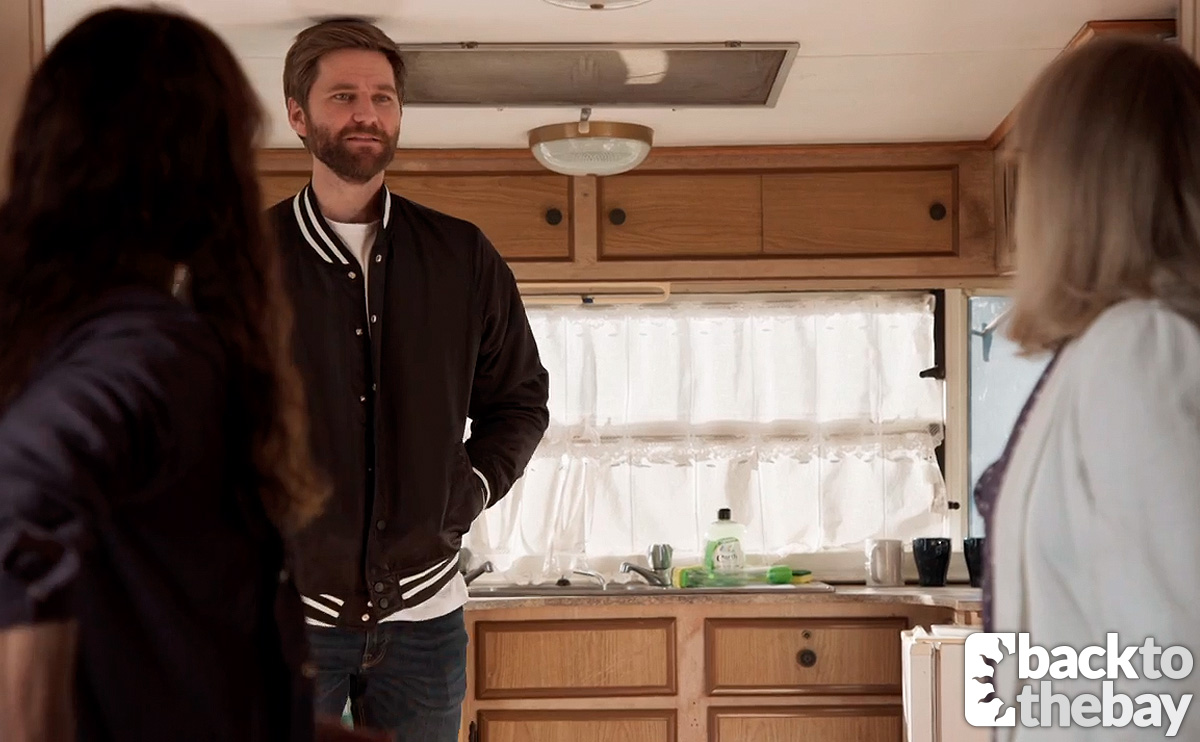 How are they going to explain themselves out of this one?

Justin and Leah fight over the value of marriage.

Jasmine suspects Lewis’ anger towards Christian is about unresolved grief.

Will Justin and Leah split up over their polar opposite values?

Ari and Mac’s day together is disrupted.

Bella gets a note from Colby.

Ziggy has an inconvenient dream.

Chloe drops a revelation on Ari.

Kieran is playing a dangerous game.

Ari gets a surprise visitor on his doorstep.

Ziggy is not going to dream about Tane anymore.