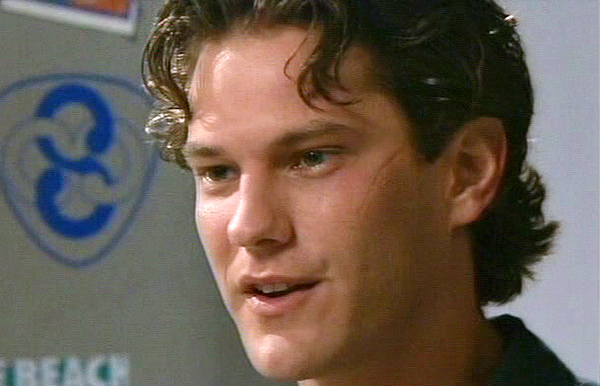 Toby was a cleaner at Summer Bay High who found Jade Sutherland’s diary when she left it behind in a classroom and returned it to her. Not long after, Jade began receiving letters from a secret admirer. She initially assumed they were from Seb, who she had been getting close to, but wasn’t entirely disappointed when she learned they were from Toby. Jade and Toby began seeing each other in secret but after a couple of near misses they were finally caught out. Seb was upset that Jade was seeing someone else but Toby told her she didn’t need to feel guilty.

Jade and Toby began seeing each other in public and she confided in him about the troubles at home, with Dani’s court case for allegedly trying to kill Kane splitting the family. She took him to the kiosk and introduced him to Hayley as her boyfriend but he ducked out of meeting Scott and Dani. He also ordered a burger despite telling her he was vegetarian. He told her that he didn’t have a family anymore, implying his parents had died when he was young, but Noah told Jade that Toby’s parents had been living in Yabbie Creek a year previous.

Jade and Kirsty tracked down Toby’s parents, a friendly if poor and uneducated couple living in a shack in the middle of nowhere with a gaggle of younger children, who remarked Toby hadn’t contacted them in months. Jade confronted Toby, who revealed he was ashamed of his family and that, having read her diary, he had tried to model himself on her ideal boyfriend. Jade was angry that he’d lied to her and also that he’d reject a family who loved each other while hers was falling apart, prompting her to break up with him.