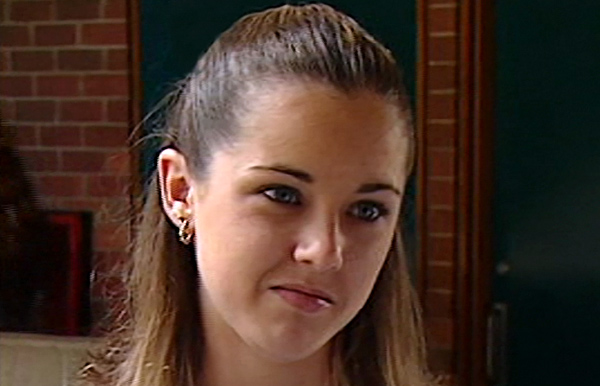 When Jade took up ballet lessons again, she soon found herself shown up in class by the star pupil, Tonya. Melissa, another student, took Jade under her wing, advising her not to give up or be disheartened. Jade was worried about her shape and felt she was unsuited to ballet. Melissa told her she knew a way to keep eating and still lose weight, making a throwing up gesture. Jade soon began to copy Melissa’s lifestyle, exercising hard and experimenting with purging after eating in order to lose weight.

Melissa became a regular visitor to the Sutherland house. On one occasion, she met Toni Davidson, who was staying with the family at the time, and, mistaking her for a boy because of her masculine clothing and hairstyle, offered to introduce her to her brother, who was around the same age. The Sutherlands and Jade’s boyfriend Duncan began to get concerned about the changes in her behaviour and Shelley’s concerns grew when Melissa talked about exercising in order to get rid of fat despite her thin figure. Melissa told Jade she shouldn’t have a boyfriend if she was serious about ballet, although in fact she and Duncan had already broken up. Jade herself felt uncomfortable when, after they’d had a snack at the surf club, she found Melissa throwing up in the bushes outside.

Melissa was surprised to witness the strained relationship between Jade and her parents, telling her that her mother showed no interest in her ballet. She told Shelley that since her father died two years previous she had had to take on a lot more responsibility around the house. She stayed the night at the Sutherlands, where everyone noticed her disappearing to the bathroom straight after dinner. Next morning, frustrated that she couldn’t get a ballet routine right, she gourged herself on chocolate cake. She then went out running with Jade but collapsed in pain. Colleen came across them and called an ambulance, as well as summoning Rhys. At the hospital, Doctor Wilson confirmed Melissa was bulimic and that, in addition to problems with her oesophagus, the repeated vomiting had caused a tear in her stomach which needed an urgent operation.